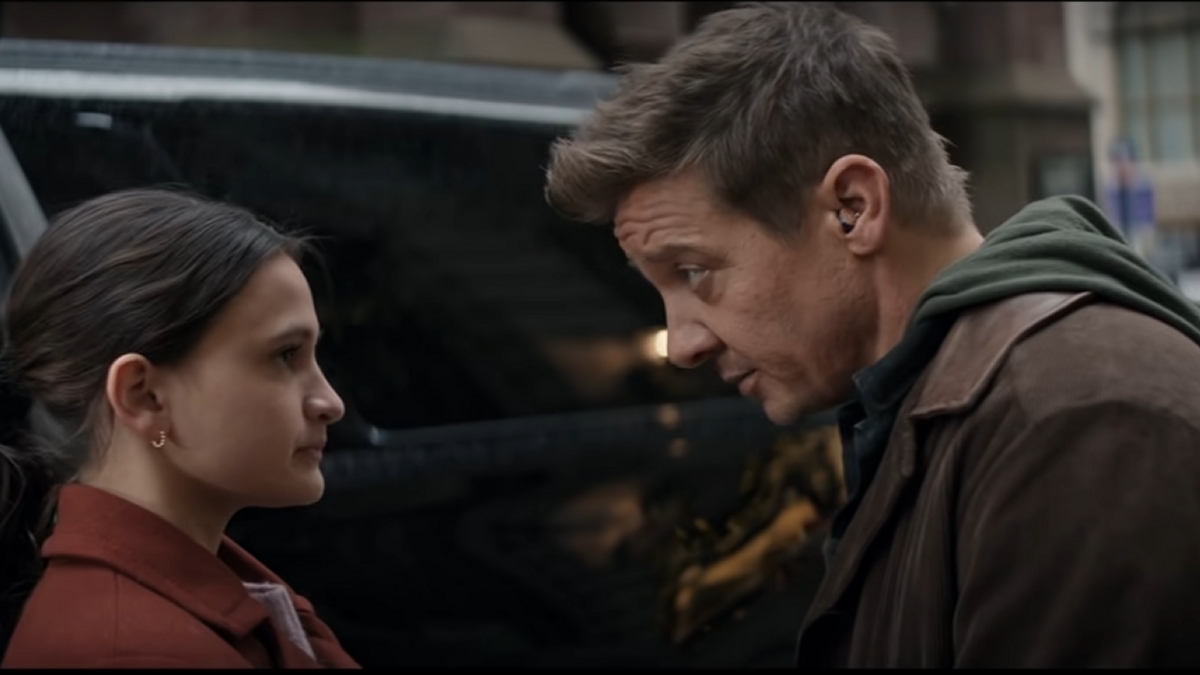 One thing about the origins of the Marvel Cinematic Universe that’s easy to forget these days is that much of the Avengers stuff was inspired by the Ultimate Marvel comics, specifically The Ultimates. This especially went for Hawkeye, who had little to do with his mainstream comic self and far more with Ultimate Hawkeye. His uniform, SHIELD black ops status, and even his family were taken from the Ultimate Marvel comics. Not only that, but the way he became a hopeless mass murderer after the deaths of his wife and kids (far more permanent in the comics) was lifted from the books.

So it’s a bit weird to see them suddenly shift to his mainstream comic self. Up to Avengers: Endgame, the only specific bit of Hawkeye taken from the regular comic continuity is that he started dressing as Ronin for a time. Now he’s starring in a Disney+ series that takes a ton of inspiration from the Matt Fraction and David Aja comic run and they’re really going headfirst into his regular Marvel Comics history. We have Kate Bishop, the Tracksuit Draculas, Lucky the Pizza Dog, and so on, but one reference goes back a lot further than Fraction’s pen.

In various shots, Clint is shown to be wearing a hearing aid. This is taken from the comics, where it’s been a regular thing on and off for years.

Back in 1983, there was a four-issue Hawkeye miniseries by Mark Gruenwald and Danny Bulanadi. In it, Hawkeye and Mockingbird were kidnapped by the supervillain Crossfire, who had a special machine that shot out a frequency that turned its victims into mindless, violent psychos. He turned it on and had Hawkeye and Mockingbird fight each other like they were on autopilot, to the point that Hawkeye would try and shoot arrows at her despite neither having a bow nor arrow on him. Crossfire decided to turn off the machine for a bit for the sake of taunting the heroes about how helpless they were.

Thinking quick, Hawkeye pulled out a sonic arrow tip that he kept in one of his pouches. To block out the mind-control, he bit down on it and turned it on. Deafened from the stunt, he was able to subdue Mockingbird, escape, and take down Crossfire. Afterwards, he politely nodded his head when Mockingbird started hitting on him, but she eventually caught on to what was wrong and shortly after, the two were married.

Clint had lost 80% of his hearing, so he started wearing a hearing aid and that was his status quo for a good 15 years or so.

The big Onslaught event in the comics led to a plot device where the Avengers were sucked into oblivion. Franklin Richards used his reality-rewriting powers to bring the heroes back from the brink, but it was used as something of an in-story soft reboot.

At the time, Iron Man was a teenager and Wasp was a literal insect woman, so when Franklin brought the Avengers back, he brought them back the way he remembered them. Since he wasn’t aware of Hawkeye’s hearing problems, Clint was recreated with healthy eardrums.

In the acclaimed Matt Fraction and David Aja Hawkeye series, which the MCU show is drawing a lot of inspiration from, Clint was jumped by the assassin known as Clown (who’s also set to show up in the Disney+ series). Clown stabbed Clint in each ear with his arrows, then shot Clint’s brother Barney. While neither were killed, Barney was resigned to a wheelchair and Clint was rendered deaf.

A flashback showed that Clint had been dealing with hearing issues since he was a boy, a side-effect of his abusive father’s handiwork. That made him reluctant to use sign language to communicate with Barney, as it reminded him of worse times and stung his pride.

Clint’s ears did get better, though the severity of the lasting damage depends on the writer. As for the MCU explanation? Maybe Clown will get the drop on him. Maybe it will be caused from that crazy explosion that knocked him back in Avengers: Endgame. I mean, did you see how that blast knocked him back?

Guess we’ll just have to find out this winter. Though it does certainly fit in well with the fact that this show is introducing another deaf hero in Echo.

Hawkeye arrives on Disney+ on Nov. 24.