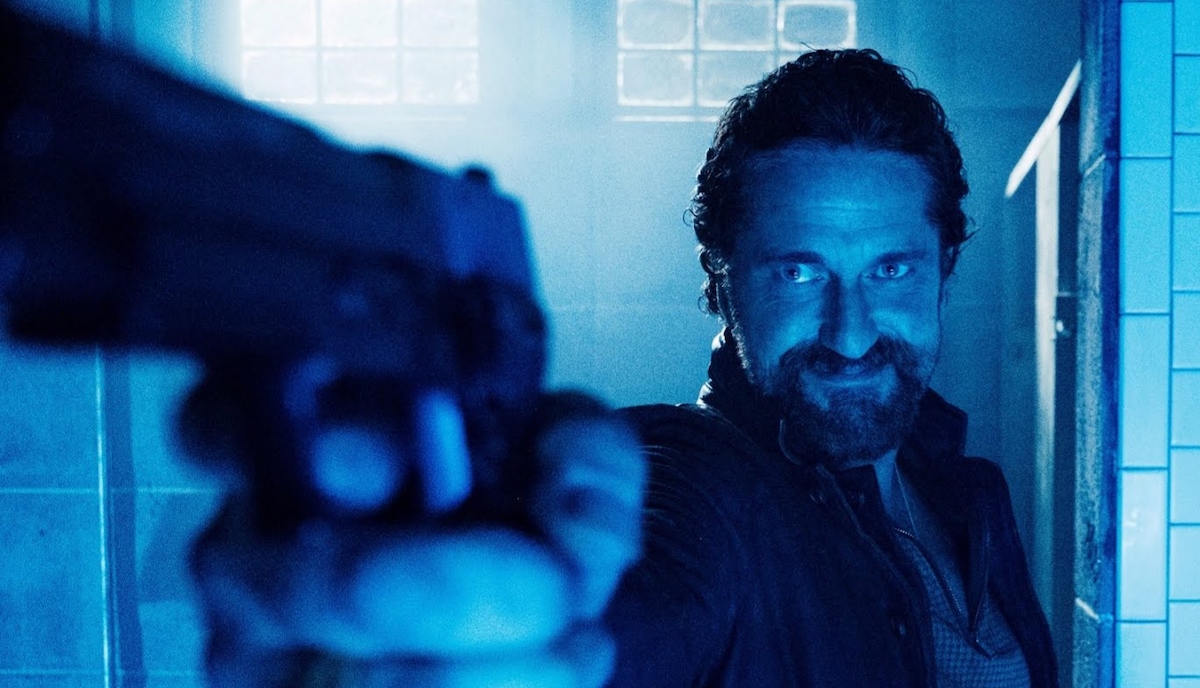 Joe Carnahan’s Tarantino impression, the same one he’s been tweaking since Narc and Smokin’ Aces, has never been closer to the genuine article as it is in his latest, Copshop. The gnarly throwback crime thriller has all the tenets of the most famous ‘70s-worshipping auteur; a grooving, percussive soundtrack, chatty lead characters, unhurried pacing, and trigger-happy scumbags who populate this pulpy, shoot ‘em up B-movie that will leave genre fans pleased as punch.

This deceptively knotty copsploitation flick finds scuzzy Vegas fixer Teddy Muretto (Frank Grillo) on the run after he flips on his high-profile clients. With professional hitman Bob Viddick (Gerard Butler) hot on his trail, Muretto decides that jail is his safest hideaway, so he sucker punches valiant police officer Valerie Young (Alexis Louder) to get locked up. Not to be outdone, Bob gets himself thrown into the same suburban slammer by posing as a drunk driver, and things really heat up once another kooky killer (Toby Huss) comes to the titular copshop. He’s looking to collect the bounty on Teddy. Sparks, and many, many bullets, fly.

The best part about Copshop is just how much fun everyone seems to be having. Sporting a ridiculous manbun and savoring every morsel of meaty dialogue he’s given, Grillo perhaps delivers his best performance yet. Meanwhile Butler adds just the right amount of wild-eyed mania to his performance as the seen-it-all Viddick. It’s the most relaxed he’s looked on screen in ages. Veteran character actor Huss takes his eccentric psycho right to the line of over-the-top, but all three men are outshined by Louder. In a genuine star-making performance, Louder takes what could have been the boring, morally sound hero role and infuses it with a healthy mix of vulnerability and swagger. Louder’s agent should be busy in the coming weeks.

While the script could be described as overwritten or like the product of someone who’s seen Reservoir Dogs just a bit too much, it works without feeling labored. There are genuinely funny references to pop culture like a riff on Chris Hemsworth and an extended discussion about the meaning of the phrase déjà vu that helps Copshop rise above many of its direct-to-VOD peers. Carnahan also manages to make a movie mostly set in one location feel propulsive, which isn’t an easy task. As good action directors do, Carnahan ensures the audience has spatial awareness of the building, which helps the gunfights feel tense but cohesive. That said, he keeps the kills gritty, maintaining the retro, down-and-dirty feel.

The fact that the showdown between the four parties takes up most of the final hour lets you know that everything is tightly staged, but with plenty of room to breathe. The second half of the film will be rightly compared to Assault on Precinct 13. Our characters are presented many logistical hurdles and the film comes up with creative ways for them to either overcome or succumb to them. No one is reinventing the wheel, and Carnahan doesn’t ever wade into any of the politics that could be addressed here, but it’s in service of presenting something unflinching and fun. As with many action movies in the same vein, there are some questions about characters’ durability after substantial injuries, but Copshop is practically begging you to turn off your mind and get into its gonzo groove.

So while Grillo and Butler will get butts into seats, Louder and Carnahan’s demented but measured approach will keep audiences satisfied and smiling. Copshop doesn’t add anything to the genre but executes the style remarkably well. For the first time in his career, the comparisons to Quentin Tarantino won’t be used against Carnahan.

Stranger Things Season 4: Could Vecna’s Victims Be Key to Defeating Him?
Episode 3 Official Clip | Marvel Studios’ Ms. Marvel | Disney+
Only Murders in the Building Season 2 Premiere Review
15 Difficult NES Games That Were Easier in Other Regions
The Magicians Season 4 Episode 1 Review & After Show