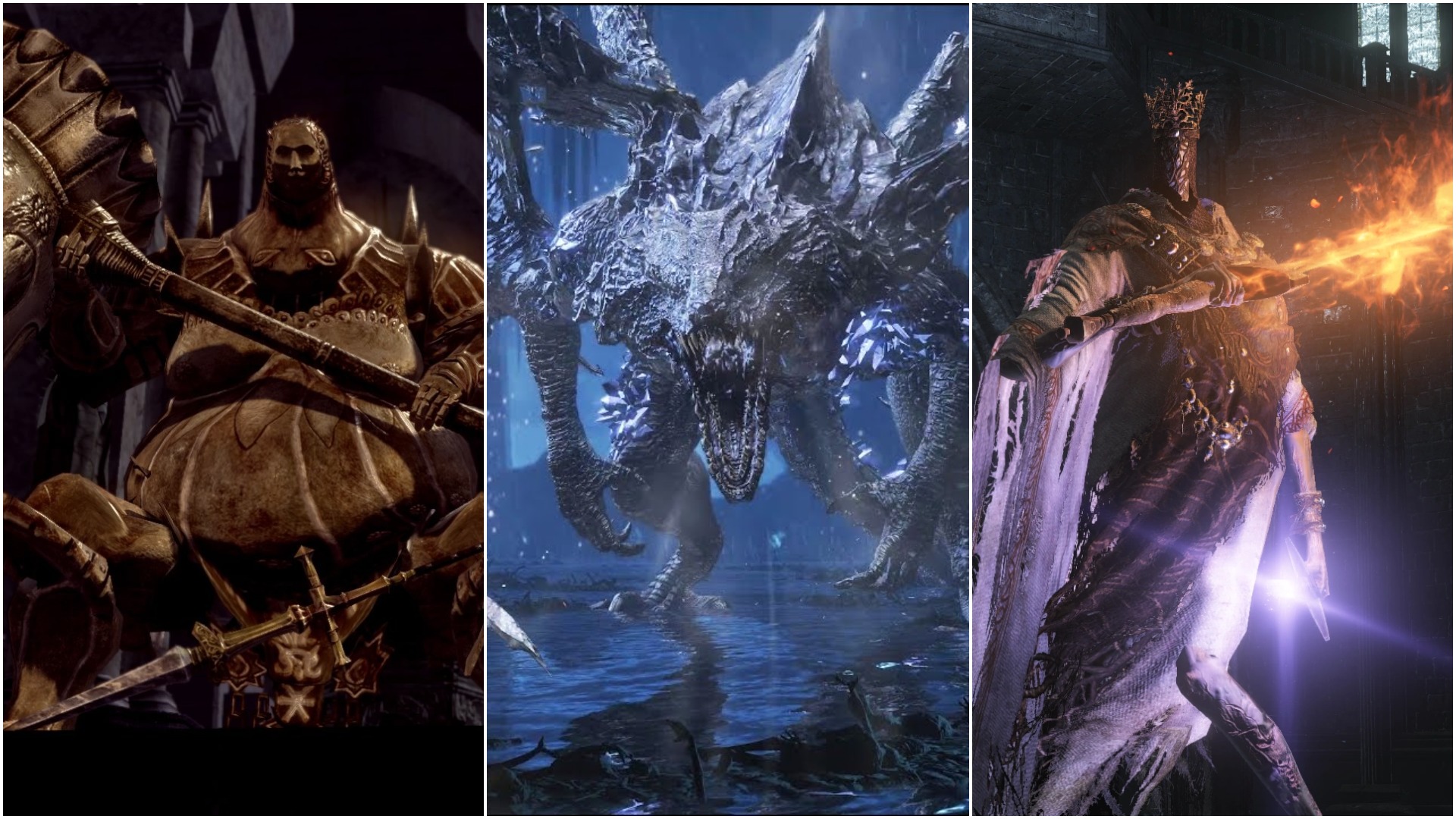 It’s easy to call Dark Souls the most influential game of the 2010s. Whether it was the deep combat, obtuse storytelling, or the unforgiving difficulty, dozens of other games have taken inspiration from Dark Souls in one way or another over the last 10 years. It’s even spawned an entire sub-genre of similar “Soulsborne” games.

There’s a lot to love about Dark Souls, but for most fans, the most memorable parts will always be the boss battles. We’ve spent hours trying to topple these bosses in the never-ending quest to “git gud.” There’s really no such thing as an “easy” Dark Souls boss. Their difficulty starts at “hard” and then increases to “borderline impossible.”

As we celebrate the series’ 10th anniversary, these are the 15 hardest bosses you will face in the Dark Souls trilogy:

The second Dark Souls game gets some flak from fans since it didn’t involve Hidetaka Miyazaki in the director’s chair. Many gamers will tell you it’s the easiest game in the trilogy because of changes made to the gameplay without his guidance, but it’s still pretty damn difficult. For example, the Ancient Dragon hits very hard. A single stomp from his massive legs, or a blast of fire from his mouth will likely kill your character. At best, you’ll have just a sliver of health left.

But as with any Dark Souls boss, the Ancient Dragon can eventually be conquered with patience and practice. Just be prepared to die a lot before then. But at least he’s an optional boss if you’d rather avoid him altogether.

Things only get more difficult from here, and most of these fights aren’t as easily avoided…

Dark Souls is generally considered “tough but fair.” With enough practice, a dedicated gamer should be able to recognize enemy patterns and eventually beat almost anything the games throw their way. But Bed of Chaos comes pretty close to breaking that rule. Many would say this boss does.

This demon resides in a giant tree, and will wantonly swing massive branches at you as you desperately try to hit the two orbs on either side of the room to whittle away its life bar. Take out one orb, and a big chunk of the floor collapses. Manage to take out that orb, and now there’s even less floor to walk on as you have to make a blind jump into the tree’s branches to take out the heart of chaos. Even then, a big swing from the branches is likely to kill you if you’re not quick enough. Vanquishing the Bed of Chaos often depends more on luck than skill.

Pontiff Sulyvahn is really fast, which means you’re bound to struggle with this Dark Souls boss. He also attacks with two swords — one hits with fire damage and the other with magic damage. That’s tough, but something Dark Souls veterans can handle. The real issue is midway through the fight when he starts spawning a phantom that’s just as dangerous as he is.

Dark Souls fans thought they could handle almost anything the series could throw at them, but for many, Pontiff Sulyvahn was the first real challenge they faced in Dark Souls III. But the final game in the trilogy managed to get even more difficult from there.

The Capra Demon has become one of the more iconic bosses in Dark Souls, a towering minotaur-like beast with two giant swords. Those who have bested him remember the first encounter well. Part of the difficulty with this demon is the two dogs at his side. Walk through the fog gate unprepared and they’ll make quick work of you before you can even get one hit on the demon.

The other issue is that the arena in which you face the Capra Demon is extremely cramped. The wall is as much your enemy as he is. Luckily, several different strategies have been discovered over the years to make short work of this fight. There’s even a way to take him out with firebombs without even entering the fog gate.

The first challenge when it comes to the Centipede Demon boss fight is dodging its heavy hitting attacks while avoiding lava damage. The second part is taming the camera, which can regularly ruin a great run. Seriously, this might be the most glitchy boss fight in the game, although sometimes that can work to your advantage if the demon gets stuck in the scenery.

The Centipede Demon is also a good example of how sometimes you just need the right strategy to beat Dark Souls’ bosses, and how failure ultimately leads to success. Getting the Orange Charred Ring when you cut off its tail is a huge help here, and you don’t even have to beat the demon to get it. It’s worth sacrificing some souls on one run for the ring so that you can come back stronger the next time around.

After Dark Souls became something of a surprise hit, fans who conquered the first game were hungry for more. FromSoftware happily obliged the following year with the Artorias of the Abyss expansion. The first boss of the DLC quickly tested any gamer cocky enough to think they could breeze through the expansion.

The Sanctuary Guardian is a massive, white winged lion who moves fast and attacks with lightning, poison, and physical damage. Not only do you have to be a high level player and have the right equipment to defeat this beast, but you also need to have nearly flawless dodging skills. And as tough as the Sanctuary Guardian is, it was actually just a prelude to the overpowered DLC bosses to come.

Slave Knight Gael is a case of slowly escalating difficulty. His first phase is a tough, but fairly standard melee battle. But then comes the second phase when he adds more attacks, and gains the ability to turn invisible and teleport. That’s bad enough, but then comes phase three where he adds in even more attacks, and now lightning randomly strikes the ground.

What really doesn’t help matters is that Gael has more health than almost any other enemy in the game. Defeating him is a battle of attrition.

If you thought the Sanctuary Guardian was difficult, then good news! The next boss in Dark Souls’ DLC is even harder. At least Knight Artorias isn’t as annoyingly fast, but he makes up for that with a series of relentless sword attacks. And if he does try to get away, it’s only to use buffs that make him even more of a pain to deal with. The best strategy is to beat him as quickly as possible.

If you look closely, Artorias is actually fighting with a broken left arm, so he’s not even at full power for the battle. I’d hate to see what that’s like.

You’ll first encounter Kalameet soaring in the background as you explore the Artorias of the Abyss DLC. That’s intimidating, but it’s really just a prelude of what’s to come. After facing other dragons, you might think that you can take him out by just attacking him from underneath. Nope. Kalameet will either stomp you to death or just fly away if you try that.

Attempt to attack him from afar, and his fire breath causes physical and magical damage, so it can’t be fully blocked. You’ve got a very short window to actually damage the black dragon during its assault, making for an extremely frustrating boss fight.

Your view of the Four Kings is going to depend a lot on how hardcore of a Dark Souls fan you are. If you’ve just played through the game once, they’re actually not so difficult or memorable. The real challenge comes on New Game+ when their stats are increased.

Whereas before, you could brute force through one king pretty quickly, that’s almost impossible on a second playthrough (or later). You’ve only got about 40 seconds until the next king spawns, and it’s easy to get caught in a situation where you’re now cornered by all four of them simultaneously. Only the most skilled Dark Souls players are going to get out of that unscathed.

The penultimate bosses of Dark Souls II are actually way more difficult than the final boss battle. By themselves, the Throne Watcher and Defender wouldn’t be too difficult. They’re fairly typical melee knight enemies. Just having the right build can get you close to taking out this duo — except for one little wrinkle.

As soon as you defeat either the Watcher or the Defender, the one left alive will rush to the side of his fallen brother to heal him. You have to carefully split your attacks between them because you have a very short window of time to take out the pair before they come back at you in full force.

Continuing the series’ tradition of ridiculously difficult DLC boss fights, Darkeater Midir is a massive dragon with high health and heavy physical, magic, and fire attacks. He’s challenging on your first run, but can one hit kill even the most seasoned warriors on New Game+.

Unlike a lot of other bosses, there aren’t many tricks you can pull off in order to cheese a win against Midir. Your best bet is to face him head-on with a melee build. If that’s too much for you, at least he can be skipped.

Ornstein and Smough effectively act as the gatekeepers in the first Dark Souls — and really for the entire series. If you did in fact “git gud” enough to beat them, you should be able to beat the rest of the game without too much trouble.

The challenge here is two-fold. They’re both very quick, and can synchronize their attacks. It’s very easy to end up cornered and taking massive damage. And unlike the Throne Watcher and Throne Defender, you can’t defeat them simultaneously. When one goes down, it just spawns a super powered version of the other. This fight requires quick reflexes, a strong build, and a solid understanding of the game’s mechanics.

In short, this boss fight is the perfect microcosm of the Dark Souls experience.

Massive, quick, and capable of dealing heavy damage in an instant, Manus is the final foe you face in Artorias of the Abyss, making him the “true” final boss of the first Dark Souls. Even though you can summon assistance in this fight, and a few items will help negate his attacks, Manus’ speed and varied attacks make him difficult to predict.

Then there’s his health bar. It’s tricky to come up with the just the right build to damage him consistently, and even when you do have a strong character, this fight is largely a matter of endurance.

First, give the Nameless King props for showmanship. This guy knows how to make an entrance, swooping into a fog-filled arena atop a very cool looking wyvern. It’s like something straight out of a heavy metal album cover. The first phase of the battle involves taking out the wyvern, and it’s actually not too bad for Dark Souls veterans (which you should be if you’ve made it far enough to face the Nameless King). A few different strategies work here.

But when the Nameless King dismounts, the real fight begins. It’s difficult to time when he’ll strike with his sword. His attacks do a lot of damage, and the only way to avoid his lunge is to roll through it. One small mistake can quickly turn into game over, but if you do manage to defeat him, you’ve truly mastered the Dark Souls trilogy.

Who do you think is the hardest boss in the Dark Souls series? Tell us in the comments!