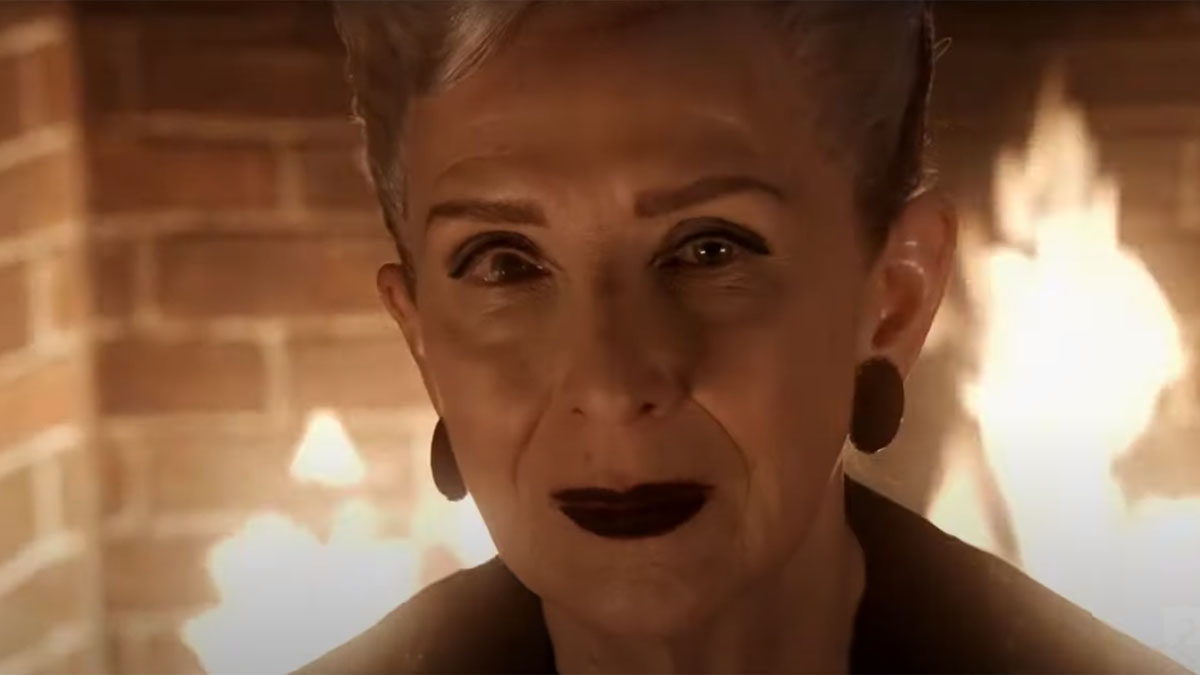 One thing you can say about American Horror Story is that they don’t shy away from making world-shattering events part of the show. Maybe it’s the announcement that witches are real. Maybe it’s the end of the world. Maybe it’s an apocalyptic cult. Or maybe it’s just the complete and total destruction of a major industry (and a major American city) because of one person getting a little too greedy. Either way, when it’s go big or go home time, American Horror Story always chooses to go big. Nowhere is that more apparent than the series finale of Red Tide.

The situation in Provincetown is getting hairier by the minute; the state police have started sniffing around due to all the unexplained murders, and it’s up to the town council to put a stop to the insane amount of killings that have been taking place in the surrounding area. Denis O’Hare’s Holden sums it up neatly when he says that the winters in town get a little strange, but everyone is willing to overlook them to make sure that summers, with all the money and tourists, keep happening, and no state trooper is going to put a stop to that. He’ll handle it.

That kicks off the climax of the Gardner family storyline, which takes place in the middle of the episode. There are schemes competing with schemes, with Belle (Frances Conroy) and Austin (Evan Peters) on one side and Harry (Finn Wittrock) and Alma (Ryan Kiera Armstrong) on the other, both struggling for different things. Belle and Austin want the Gardners dead, to prevent Hollywood’s influence from rotting Provincetown and to preserve their way of life (the same reason why Holden turns to them to solve his problem in the first place) and to avoid upsetting the delicate balance they need. Harry wants to get his family free from Provincetown and start a new life somewhere else, living off the money his backlogged writing will make them so he can pour all his dedication into Alma’s violin playing and free them of the influence of The Muse.

If only getting out were as easy as getting in for Harry. Some doors, once opened, can never be sealed. And once you’ve had a taste of true creative genius, can you discard it over something as silly and malleable as a moral code?

Perhaps that’s the point. Later in the episode, Ursula (Leslie Grossman) is giving a speech in front of a group of inspiring writers at a seminar, and she brings up a solid point. Writing isn’t so much about talent as it is about being able to ignore tedium and rejection and toil on with the very hard work of words, songs, or whatever the chosen artistic medium might be. The Muse is a shortcut to unlock all that creative potential, but what separates the Talented from the pale people is that little spark of self-flagellation that allows them to push on ahead, despite knowing just how much life it will sap from you (or how much blood you’ll need to drink).

Writers Brad Falchuk and Manny Coto hammer that point home pretty effectively, particularly in Belle’s unhinged rant and Ursula’s rabble-rousing speech in the screen-writing class. Hollywood is a place full of, in this universe, very selfish people who are willing to do anything to make it and everything to stay on top. People like Harry, who at least tries to do the right thing after he’s already made his fortune, are rare in that he has a conscience that eventually gets the better of him. Other people, like Alma, aren’t burdened. She’s the best, she knows she’s the best, and there’s no stopping her from clawing, scratching, and neck-chomping her way to the top. And when push comes to shove, anyone standing in her way, even her father, will get victimized.

In the hands of John J. Gray, Alma’s evil intentions are never in doubt. She’s clearly planning something. However, the way her plan comes to fruition—Ursula no doubt had a lot of influence in this scheme—is still shocking, even by American Horror Show standards. As it stands, it’s a twisted capper on a pretty twisted sequence, which is shot and edited very well. There’s plenty of gore and some impressive jump scares, particularly when the pale people smash through the windows of Belle’s house to get their revenge. It’s good stuff, and the graveyard sequence is shot ambiguously enough that you’re not quite sure if anyone is going to come to Harry’s aid or not.

To Ursula’s credit, it’s a great plan, and a pretty fiery speech she gives the pales. It’s matched only by the speech at the end of the episode Falchuk and Coto give her that seems to kick off a vampire apocalypse in downtown Los Angeles. If the slaughter in P-town wasn’t dramatic enough, this certainly is, with the show becoming a full-on survival horror, like if 30 Days of Night took place in a crowded city and nobody cared all that much about getting caught. It’s a short sequence, but very impactful, as it’s clear that at least part of the United States has fallen to the vampires, even as The Chemist (Angelica Ross, who looks very cool at all times in this episode) and Eli move on to a new part of the world to make a fresh start, and to work on a new pill project.

Is the whole creativity and writing theme too inside baseball for the average viewer? Possibly! Falchuk and his co-writers talk a lot about the process of creativity and the vapid vacancy of Hollywood’s big egos. However, the general theme of frustrated dreams, be they painting, music, or some other creative pursuit, reaches out to pretty much anyone. Everyone has some dream, secret or not so secret, that’s been crushed by the world at large, and no doubt at some point everyone has wanted to stick it to the Hollywood of that industry. In a sense, those blood-sucking rage monsters smashing out car windows are all of us. The only thing that changes is the repressed dreams that drive us to take The Muse.