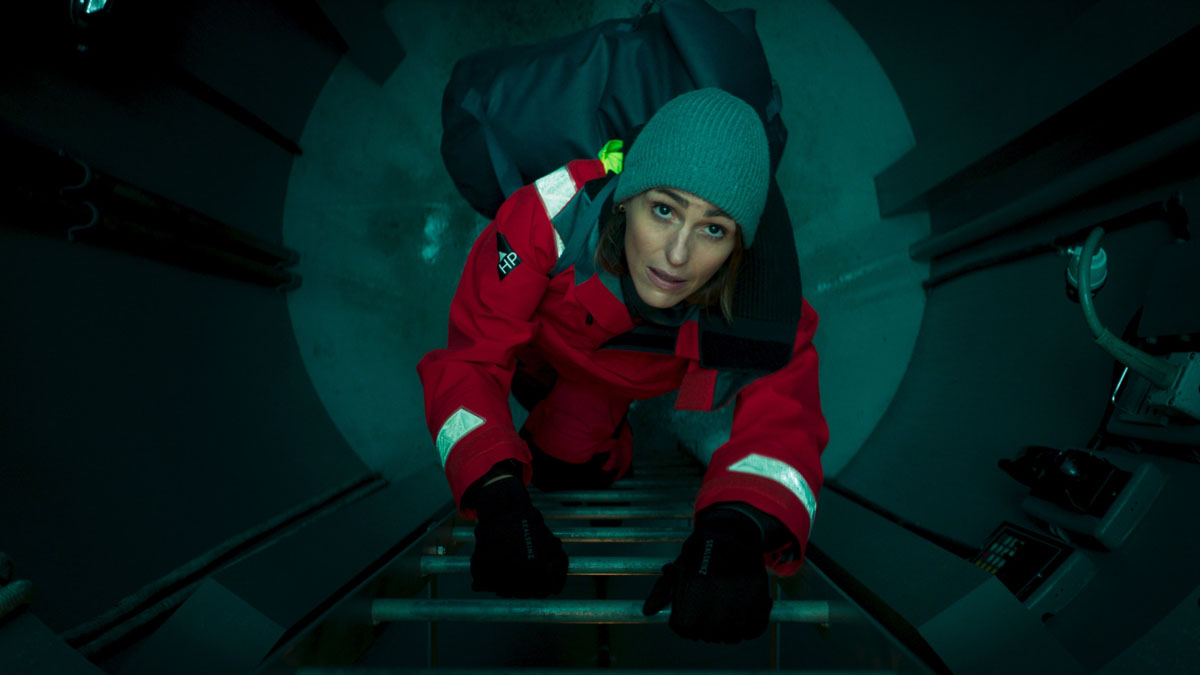 Nobody could accuse BBC thriller Vigil of lacking plot. That series was a Matryoshka doll, in which each mystery broke in half to reveal another, then another, and another. What began with a sunk trawler, a heroin overdose and a whistle blower ended with a Russian plot, a multi-layered Naval conspiracy, a drowned activist, three dead crew members, and a saboteur in a cage, shitting in a bucket. Along the way there were family revelations, broken hearts, an extra-marital affair, and the deadliest tin of sliced grapefruit ever to feature on television. Join us as we straighten out anything you may still be pondering after this packed thriller’s post-finale.

Why did the Russians want HMS Vigil to surface?

It was all for the PR, apparently. The Russians wanted to engineer a situation where a British Trident submarine was shown to fail, then forced to surface and conduct an emergency evacuation onto a waiting Russian boat, which would tow it home, laughing all the way. Think of it as an exercise in national humiliation aimed at undermining Trident and attempting to influence the forthcoming parliamentary vote on whether to renew the UK’s continuous at-sea nuclear deterrent.

How did Doward sabotage Vigil?

He undermined it to DCI Silva from the start, telling her on their helicopter ride in that his usual boat – Virtue (the irony!) – was much less trouble than Vigil. Then at the end of episode one, he jimmied the lock on the RCMS panel to manually force the nuclear reactor to shut down. In episode two, he deliberately failed to notice the tanker with which Vigil almost collided until it was almost too late, generally putting the shits up everybody. Then in episode four, he left a note in Jackie’s apron threatening her to hurry up and release the nerve agent she’d been tasked with doing, which prompted her to fatally poison herself. Then he deliberately snagged the communications wire, taking the ship offline. That’s when he knocked out Silva, tried to drown her, attempted to suffocate Glover, and broke open the bilge tank valve to flood the boat, before stabbing Prentice to death and taking Silva at knifepoint to the control room. Busy boy.

Why had Doward become a Russian spy?

Unlike Jackie, who did her work for the Russians in order to save her son, we don’t know what motivated Doward, and perhaps it doesn’t really matter. “No comment” was his answer under interrogation (he’s obviously been watching too much of World Production’s other big BBC thriller Line of Duty). Silva surmised that Doward didn’t have any particular political allegiance to Russia, but undertook the sabotage because he was a narcissist and it made him feel special and powerful, and that’s as good as we’ll get.

No, but he was hardly a friend to her. Jade trusted Ben, who was the leader of the Dunloch anti-nuclear peace camp where she lived. When Jade got suspicious about the presence of Peter Ingles at a protest, Jade took his photo, wrongly thinking that he was a plant for MI5. After her boyfriend Craig Burke died on board HMS Vigil, Jade showed the photo to Ben, wanting to expose the suspected MI5 plant. Ben had an existing relationship with Peter Ingles (a Russian agent whose real name was Piotr Vasilyev) and so recognised him. Ben then told Ingles about the existence of the photo and warned him to be more careful in future. Ingles, knowing that the photo would compromise the identity of Doward, the Russian asset he’d just planted on board HMS Vigil, asked Ben to arrange a meeting between him and Jade, where he would shine a light on what really happened to her boyfriend. Jade and Ben met with Ingles, who drowned Jade and stole her phone. Ben did nothing to help, knowing that he would look like Ingles’ accomplice if he involved the police.

Two hours after Jade died, Ben downloaded the photo from her laptop to his phone, deleted her copy and hid her computer. He later took the photo to Patrick Cruden MP (an old pal from their CND days and co-incidentally Jade’s secret father), pretended that he had taken it and planned to leak it to expose the fact that the Russians had a plant in the British Navy, thereby making Trident submarines look vulnerable to enemies and negatively influencing the upcoming parliamentary vote about Trident renewal.

MI5 aren’t going to tell the Russians that they’ve uncovered and arrested Doward, they’re just going to hold a closed trial for him, convict him with the evidence gathered by DCI Silva, and let him rot in isolation in prison. Good riddance. Ben Oakley is going to prison for a long time for his part in the lead-up to Jade’s death, and for withholding evidence and trying to evade arrest, promises DS Longacre. And Ingles has diplomatic immunity which means he can’t be prosecuted in the UK and was flown back to Russia soon after his cover was rumbled. The GRU will probably give him a warm welcome.

Why was Craig Burke killed?

The Russians needed to kill one of Vigil’s Sonar Operatives so that their plant CPO Doward could be brought in from another boat as a replacement, to work his sabotage. Peter Ingles (see above) had already approached Craig Burke (after an introduction by Ben Oakley) about becoming a Russian asset, but Burke refused. That left Ingles vulnerable to being identified by Burke, who had started a dossier on his fellow Vigil crew members, presumably in an effort to sniff out any who had also been approached by, and were working for, Ingles. Burke knew that the British Navy had covered up the serious incident in Port Havers, Florida and so knew that he couldn’t trust officials or his crewmates with what he knew. That’s why he amassed the evidence he’d collected on a hidden thumb drive intended for Jade. The Russians had Craig Burke murdered to kill two birds with one stone – getting rid of the threat to Ingles, and creating a premise for Doward coming aboard.

The boat’s cook Jackie Hamilton poisoned him with a nerve agent in exchange for the early release of her son from an Indonesian prison on a drugs charge. She had evidently also been approached by Peter Ingles, and coerced into acting for the Russians to help her son, and the pair had been communicating through coded messages on a fishing website. The guilt though, was too much for Jackie and so instead of enacting the second part of the Russian plan and releasing the nerve agent more widely to force Vigil to a surface evacuation, she deliberately opened the device when she was alone, then attempted to contain it, but died almost immediately as a result.

Why did the Rear Admiral lie about the Russians being responsible for the trawler accident?

Two reasons: 1) if it were known that the trawler nets had been dragged under by a US submarine, questions would be asked as to why one of our allies was secretly surveilling a British naval submarine. Those questions would inevitably lead back to the Port Havers cover-up, in which Vigil’s drunk, high and negligent crew combined with the boat’s ageing equipment almost caused a nuclear explosion to rival Fukushima (only averted by the fast thinking of engineer Gary Walsh), and killed two US marine workers, whose deaths were reported as accidental drowning. And 2) the Navy wants parliament to vote to renew Trident, so any way to put the fear of God into people about the Russians and a new Cold War would play into that.

Because the Navy can prove that the photograph was in his possession hours before the police saw it, in which time a naval officer was stabbed to death by the man who could have been identified in it. Never mind that Vigil didn’t have any communications at that precise time, so it wouldn’t have made much difference.

What made the Russian ships disperse in the finale?

When the USS Delaware made it look as though it was preparing to fire torpedoes at them. As the Rear Admiral told the US Defence Secretary, the Russians believed they were unopposed and it was the UK and US’ job “to change that perception”. There was some talk of making them shit their uniforms too, but let’s not sink that low.

Why did Captain Newsome ask Silva what would be in her report at the end?

Having just watched Lieutenant Commander Prentice zipped into a body bag, he wanted to know whether she was going to report his XO for taking heroin from Gary Walsh and planting it on Craig Burke’s corpse, and for punching Burke on the day he died. Silva’s reply indicated that she was going to give her findings on Jackie, Burke and Doward, but nothing else. That means she’s keeping Walsh, Prentice, Glover and Docherty’s wrongdoings out of it, and preserving their careers.

Read more about Vigil on Den of Geek here.

Doctor Who’s Best Stunts
The Best Rick Grimes Moments on The Walking Dead
House of the Dragon Episode 8 Trailer: The Threat of War Looms
Overwatch 2 Stats Explained: What Does MIT Mean?
Marvel Contest of Champions Summoner Showdown Is Back!