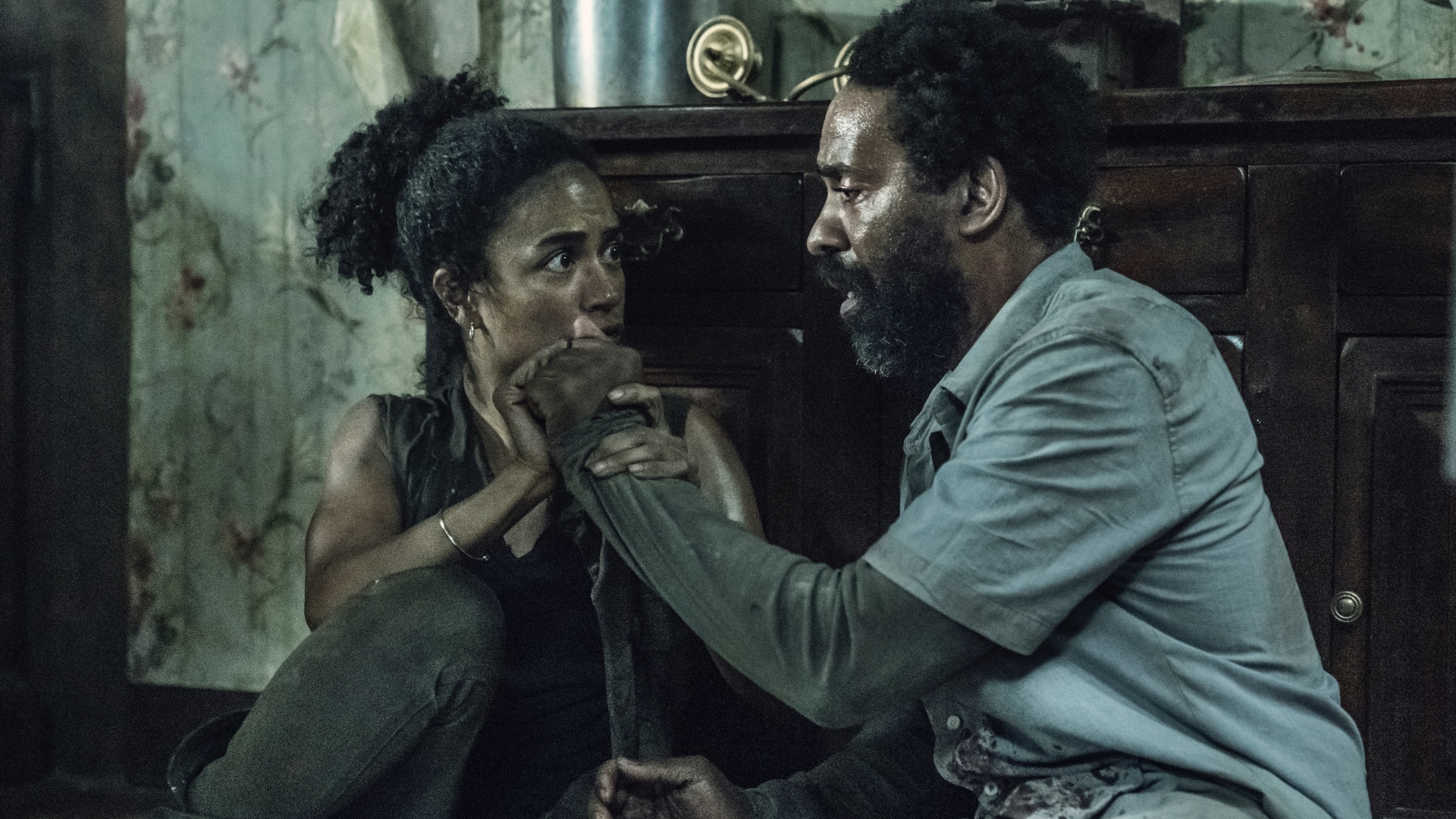 Clearly, writer Kevin Dieboldt and the various creative crew behind The Walking Dead are Wes Craven fans. The 1991 Wes Craven film The People Under the Stairs was one of the better movies Craven did, and it remains a lot of fun while also being shocking and still having some great scares. “On the Inside” takes that premise, combines it with Mile Flanagan’s Hush, and the end result is one of the most jaw-clenching, teeth grinding episodes of straight-out horror that The Walking Dead has done. KNB doing the special effects on that movie rubbed off on Greg Nicotero and Howard Berger, because not only does the special effects live up to that high standard, the episode itself is a full-on banger of a tribute to the late Wes Craven.

There’s no shortage of Last House on the Left gristle in “On the Inside.” There’s few places The Walking Dead won’t go, and there’s no cutting away demurely or emphasizing psychological horror in this episode; when it’s time for someone to get hurt, we see it, from a knife plunging into a chest or a fingernail getting ripped out with a pair of pliers. And that’s nothing compared to the full-throated horror of the episode’s climax, which contains some of the most audacious work of KNB’s illustrious special effects career. It’s as if Greg Nicotero was looking over an old sizzle reel of his best work, saw Captain Rhodes’ finale from Day of the Dead, and thought, “how can I make that more difficult and more awesome?”

Nicotero has become more than just a solid director of special effects sequences. I feel like I praise him every time he directs an episode, but his missteps are rare and infrequent; if he makes any in this episode, they’re not noticed because he follows them up with something stunning, or with Lauren Ridloff putting on a bravura performance. Throughout the episode, it’s established that Connie is exhausted, on no sleep, and too paranoid to sleep despite Virgil (Kevin Carroll) pushing for her to get some much-needed rest. She refuses, the after-effects of being trapped in a cave full of walkers fully evident on her face every time she has a flashback to being trapped. (The flashbacks themselves are mere memory fragments, deployed as jump scares not for the viewer as much as the character.)

With Connie being featured for much of the episode, Kevin Dieboldt’s dialog in those scenes is light, but effective when deployed. Lauren Ridloff is a great physical performer, whose facial expressions and body language convey as much as the American Sign Language at her fingertips. The sequence in which she runs into the room with Virgil, panicking, only to take his knife and scrawl “NOT ALONE” into the canvas of a painting is particularly effective, and it’s easy to see that the two characters bonded with one another while trapped underground through their interactions. They’re all they have left, and Virgil’s concern for Connie seems genuine, as the actress portrays the character’s lack of sleep through manic expressions and the wide-but-exhausted eyes of a child desperately trying to avoid bedtime. The communication between the two characters is rough, but effective, and their physical distance from one another throughout most of the episode works great, because it puts Connie in danger.

One of my favorite tricks Nicotero pulls in this episode is to isolate Connie. When isolated, the viewing audience loses the familiar comfort provided by foley. Connie’s scenes are given only the sparsest of soundtrack, with the viewing audience getting plunged into the thrumming heartbeat silence caused by a complete lack of background noise. The only sound is an accurate recreation of the sound of silence reverberating inside someone’s head when their ears are plugged shut, and the warm womb-like hum only serves to make Connie’s sequences of exploring the house, certain they’re being watched, all the more tense.

When Connie is with Virgil, or being openly chased by one of the feral man-monsters hiding within the walls of the house, the return of sound only makes the tense, Bernard Hermann strings that hit the soundtrack during the pursuit all the more unsettling. The scene in which the bloody hunting knife plunges through the wall inches from Connie’s face is applause-worthy in the way it’s shot and staged. Familiar horror references are always appreciated, particularly when they’re knocked out of the park like this.

There’s no real respite from tension in the B plot, which goes back to Daryl attempting to prove himself to the non-Leah Reapers. It’s tense because he has to torture a friend to get information about hunting down other friends while keeping up the act well enough to fool Pope. It’s the direct opposite of the scenes with Connie; she’s in complete silence while those around her (including the hiders in the house) are shown in noise, while Daryl and the Reapers are making lots of noise and the hiders in the house are silent. It’s a good juxtaposition, and no less effective for giving Kevin Dieboldt the opportunity to have Daryl cleverly leak information on the Reapers to Maggie and company hiding in the basement while still sounding like he’s playing ball for their team.

Much like Connie wanders through the house, knowing she’s being watched but unable to prove it, Pope seems to be watching Daryl closely, waiting for him to tip his hand but for the moment, unable to prove it. It’s not paranoia if they’re really after you, and it’s not paranoia when you don’t trust the leader of your new group not to kill you for a simple mistake, or for being unlucky enough to get stabbed in the back during a fight. Daryl’s hesitation to side with The Reapers, after that display, is perfectly logical, unless you’re Carver. (Alex Meraz is nice-guying all over Leah in every scene he gets to amplify his repulsiveness.) Why would anyone buy into Pope’s madness if you weren’t already half-drunk on the Koolaid?

Things end well for Connie and Kelly. Daryl, however? His fate hangs up in the air, as the final shots of the episode establish just how tenuous a place he has in The Reapers, even where Leah is concerned. There’s a brief break to exhale and un-knot the shoulders, but the edge still hangs over Daryl Dixon’s neck. With every antagonistic word traded with his traveling companions, he seems to bring the blade closer. Maybe he’ll be able to cut his bonds with it, or maybe he’ll lose his head.