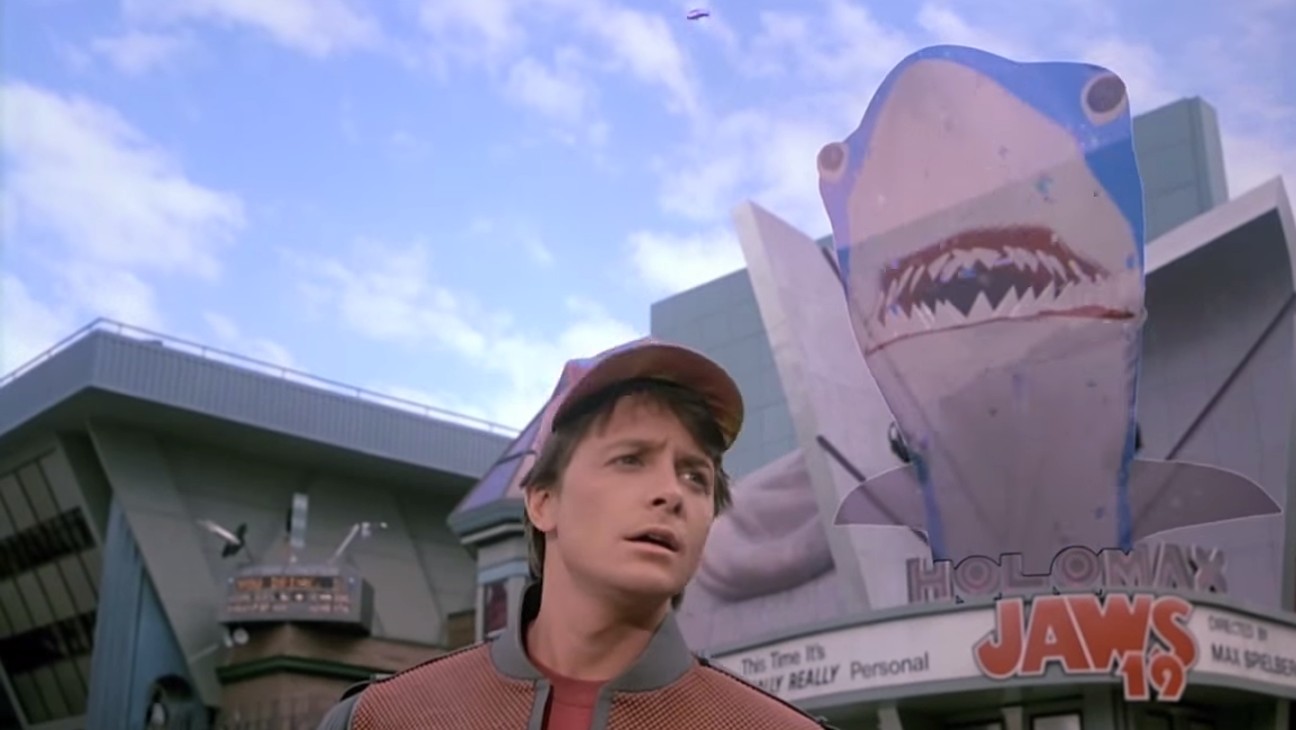 Back to the Future Part II is a strange movie. As a sequel that director Robert Zemeckis and screenwriter Bob Gale never intended to make, the ambitious follow-up to one of the greatest sci-fi comedies of all time was put into production simultaneously with Part III, which may have ultimately hurt the middle chapter since Zemeckis was still shooting scenes filmed in the Old West while editing Part II’s trippy vision of the then distant future…of 2015.

Even so, there are elements in the second Back to the Future that still play like gangbusters today, particularly in the sequences set during 2015. To be sure, part of the charm now is what those wild guesses about the future got wrong—such as the idea we’d all be driving around in flying cars, or even simply own cheap cars that didn’t run on fossil fuels. There were no real hover boards in 2015 (or 2021 for that matter), nor even automated Texaco pumps. Yet what Back to the Future Part II got very right is the numbing horror of something like Jaws 19.

Indeed, one of the best bits in the whole film is a slight dig at BTTF’s own studio, as well as the legacy of the film’s producer. The original Jaws is of course the first modern Hollywood blockbuster and it put Steven Spielberg on the map. With its innovative storytelling of leaving the monster to the imagination before finally providing the spectacle in the third act, Jaws is a masterpiece in narrative restraint that could still play for all audiences.

…Which is something no one would say about the three cash-in Jaws sequels that Universal Pictures green lit in the span of 12 years after 1975. In fact, when Back to the Future Part II was released in ’89, it’d only been two years since Jaws: The Revenge, the one where the ghost of Jaws went Bahamas and chased the Chief Brody character’s widow to the Caribbean while on a vendetta for what happened in ’75. It’s kind of hilarious.

As is the scene in Back to the Future Part II. In that sequence, Michael J. Fox’s Marty McFly stands slack jawed in the middle of Hill Valley’s town square, the same space that was so memorably used in the first BTTF film where Marty was forced to finally accept he’d traveled to the year 1985. In the sequel, he comes to realize what it means to be in 2015 when he turns around to face the local multiplex, which has only one film on its marquee: Jaws 19. And then to demonstrate to Marty the state of 21st century special effects, the “HOLOMAX” release teases its thrills as a holographic Great White Shark emerges from the building and descends on Marty’s head.

Perhaps like many an audience member who choked on their popcorn kernels in ’75 with fear, Marty screams bloody murder—and then realizes it’s just a movie and scoffs, “The shark still looks fake.” Yes, it always did, but at least in the first movie that didn’t matter so much.

At the time, the scene was a nice dig at Universal’s expense as well as the Jaws franchise as a whole. What was once the most revolutionary Hollywood movie of 1975 had become a punchline by 1989: a once glorious title that’d been run into the ground with endless cash grab sequels. And the joke is even funnier because of the “19” in the title. Nineteen movies of the same franchise. Could you even imagine?!

Oh, how sweet the irony is, then, that one of the most absurd notions in Back to the Future Part II turned out to be the most true! No, there haven’t been 19 Jaws movies (yet), but that might be by virtue of the studio churning the franchise’s mystique into putty before Gen-Xers and Millennials could grow up with it beneath unsullied nostalgia glasses. Nevertheless, the future where Jaws 19 could exist came true.

Consider that we scoff at the idea of 19 Jaws movies being made in 40 years, but Marvel Studios has released 25 pictures in only 13, with two more due out before Christmas 2021. And that doesn’t even include the television shows that are now coming to dominate Disney+.

I know what some will say: Marvel movies are a series of interconnected franchises, as opposed to one amorphous content farm. But that’s not entirely accurate. There are exceptions, of course, which stand out as singularly distinct from other MCU efforts. There’s Black Panther, for instance. That 2018 Oscar nominee is totally removed from the events of The Avengers, you might say. Then there’s Guardians of the Galaxy and its wacky space opera shenanigans occurring literal light years away from the events of Iron Man 3.

And yet, the appeal for most moviegoers, and the brilliance of Marvel’s marketing strategy, is that they all seem like the same thing to the undiscerning eye. And even to the discerning one, there is a pat familiarity to the formula, story beats, and sitcom-esque ability to wink at the audience at its own silliness. Tonally, they all feel of one piece. Hence why the first Shang-Chi movie was gladly welcomed by the industry last month as Marvel’s latest blockbuster hit—a feat borne in large off it being the next Marvel movie, as opposed to a new original property without a built-in audience.

It’s an aspect to the whole series which caused Dune director Denis Villeneuve to suggest that some Marvel movies are “cut and paste.” It’s also a formula which aids the studio to force its millions of fans to see it “as all connected” and be encouraged to go see the Ant-Man sequel they might otherwise skip in order to discover how its post-credits scene will set up the deus ex machina for Avengers: Endgame.

And that aforementioned Black Panther originally had its protagonist introduced in Captain America: Civil War, an Avengers movie by another name. It’s also the only “Cap” flick to cross $1 billion because they stuck Iron Man in it. Similarly, James Gunn’s Guardians films are genuinely auteur-driven, yet they still worked as a years-long tease of Avengers: Infinity War and Endgame’s big bad: Thanos. Hell, Infinity War’s biggest selling point in the trailer was seeing the Avengers and Guardians meet face-to-face for the first time.

The methods and talent being used to produce these endless sequels are far more sophisticated and entertaining than the hack work which produced Jaws: The Revenge, but then that’s why Jaws only lasted four movies and Marvel’s already mapping out its 30th “event” in the next few years.

This is not meant to only criticize Marvel, however. They are simply the most successful studio at exploiting their intellectual property in the 21st century. Universal’s own Fast and Furious movies aren’t half bad at that game, though. This summer just saw the 10th “Fast Saga” movie when you count Hobbs and Shaw. And while Vin Diesel claims the 11th main line Fast and Furious movie will be the last, you just know with its own Avengers-sized cast that Hobbs and Shaw will be merely the first spinoff franchise from “the family.”

Even Spielberg, who was reportedly never happy with the Jaws sequels and what they did to his first masterwork, has been much more ready to “open up” later successes like Jurassic Park. Considered a “smart” blockbuster entertainment in 1993 that inspired genuine awe from millions of moviegoers, that film’s fourth sequel (which was produced by Spielberg, like all the follow-ups) reveled in watching dinosaurs stalk around a haunted house, as if they were Frankenstein and Dracula. Next year’s Jurassic World: Dominion is supposedly intended to be the “final” film of the three most recent, Chris Pratt-led sequels, as well as another sendoff to the original 1993 movie’s cast. Yet it seems dubious that it’ll be the last film set in that “universe.”

After all, the “Skywalker Saga” ended with a whimper in 2019’s Star Wars: The Rise of Skywalker, but Disney is preparing to churn out more Star Wars movies and TV shows than ever before in the next decade.

This is not to say you should feel ashamed for enjoying any of these movies or franchises. Folks like what they like. But what Back to the Future Part II perhaps unintentionally predicted was that audiences would have an appetite for a proverbial Jaws 19.

When BTTF became a trilogy, sequels were still seen as a creatively risky proposition. Filmmakers often maintained artistic credibility by attempting to turn sequels into a larger thematic whole—often as a trilogy. Lucas set that standard with Star Wars, and only after his buddy Francis Ford Coppola claimed he’d never make another Godfather movie after Part II. Spielberg originally walked away from Indiana Jones after three movies, and many likely wish he’d stayed firm about that in retrospect. Meanwhile, Zemeckis and Gale have done the near impossible thing: refuse to allow Universal to make a fourth Back to the Future movie or reboot the series entirely.

But equivocations in the industry about a proverbial Jaws 19 are long gone. What was once a cheeky riff on the dystopian Coca-Cola billboard ads in Blade Runner have become a modern day reality in 2021. And hey, there’s now a real holographic Times Square billboard ad for that, too.