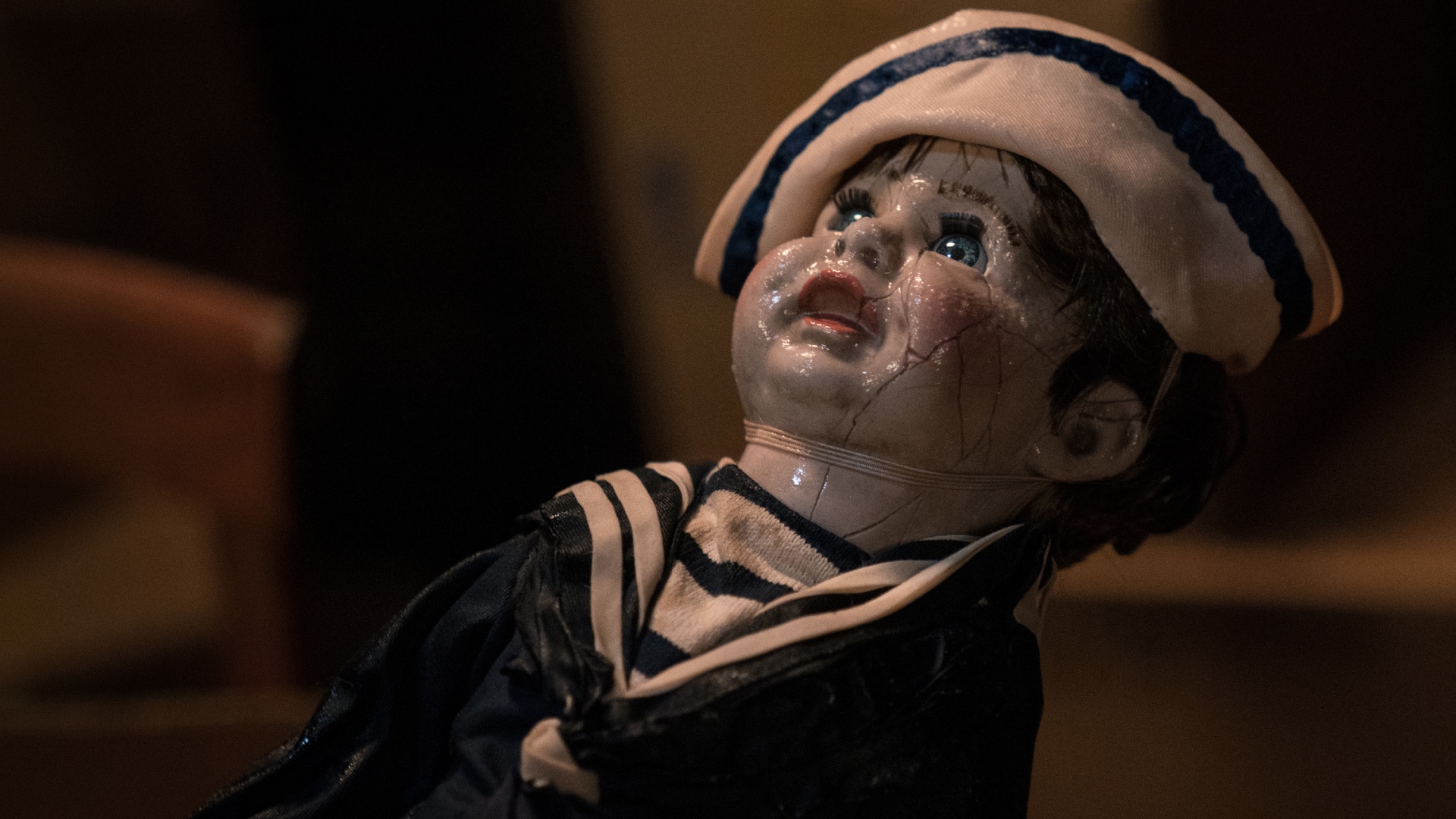 Pinocchio, your strings are showing. Creepy dolls don’t have to walk, talk, or wet themselves to capture paranoid attention. Chuckie, Annabelle, Talking Tina, and the Killer Krusty Doll from The Simpsons’ “Treehouse of Horror III” all bring solace to some, and torture to others. Eddie graduates from recurring character to monster-of-the-week in Evil season 2 episode 12 “D Is for Doll,” but will he live on in future episodes, or become another loose string in the fabric of the series?

As a favor to Kristen’s (Katja Herbers) therapist, the team is watching a man whose son is being pushed around by what might be a demonic infestation, or it might just be a doll which has seen too many Twilight Zone episodes. After a search of the house, a doll is found wrapped like a mummy, in a box which is secured by chains, which has water damage not caused by weather or pipes. The entire attic where it is found smells “like something died” in it, according to Ben (Aasif Mandvi). The object doesn’t breathe, move, or talk. It appears to be an inanimate, hand-made creation, but it communicates with its owners. The now-deceased mother of the battered fifteen-year-old gave the doll treats, and did whatever it wanted. Until she didn’t, and died.

The little boy who Kristen’s daughter Lynn (Brooklyn Shuck) babysits also follows his doll’s instructions. He doesn’t even want to play hide and seek in his own house, because his Eddie doll doesn’t like to share, and doesn’t play well with others. All this seems to mean the doll communicates, but it can also be something communicating through the doll. During one sequence Sheryl (Christine Lahti) finds herself in possession of more than one of the porcelain-faced figurines she makes financial sacrifices to. They are not the only Eddie dolls on display during the episode, but while Sheryl seems genuinely surprised by the extra toy friend, she knows exactly what to do with it.

Having two dolls present at a ritual appears to add power to the proceedings. The sequence reminded me of the film The Ninth Gate, where the real directions for a true satanic ceremony is spread out among three books, and knowing how to decipher Lucifer’s cipher. Edward (Tim Matheson) is playing a dangerous game with Sheryl. For himself, of course, she gets a little slap-happy towards the end. Edward thinks he can teach a Pavlovian dog new tricks, but Sheryl’s bark has more bite than he can chew. He does leave a nice parting gift – a family heirloom which doubles as its crest on the tablet of sigils. We don’t yet know the significance of the cryptic scroll, but it looks like a pre-digital Ancestry.com for demon spawn.

The generational specimen, kept in a mason jar, interacts very well with the two Eddies.

“D Is for Doll” opens with Sister Andrea (Andrea Martin) pouring the aggression into passive aggressive power plays. T is for trouble when the good sister is doling out the sugar cubes. She and Leland (Michael Emerson) have been performing graceless duets since their first pirouette at knifepoint, and are highlights in any episode. Leland is trying to make headway with Monseigneur Matthew Korecki (Boris McGiver), desperately squeezing his attention between his job as a hellcat and the interloper standing in his way. Leland is pressuring the Monseigneur into giving him a full-time position at the church, overseeing the recently possessed and offering counsel and consolation for their continued contrition. Sister Andrea is such a force in the room, she is basically cast out by the most superior official. It is a perfect beginning, comic, tense, and conspiratorial.

Sister Andrea’s scenes with David Acosta (Mike Colter) are no less spectacular, though far more intimate. The two characters are truly in a world of their own, separated from even their peers by a real calling, and a true mission, and the actors who play them leave emotional restraint at the door. Each has been more vulnerable, but together they are able to examine the root cause and determine personal responsibility. Martin and Colter allow doubts, recriminations and defiance full reign in their immediate consciousness, but never once lose perspective or make a false reach. They say twice as much because they make apparent the ideas they are biting back. In a sense, it’s as much fun as watching Kristen in the wine barrel during “S Is for Silence.”

The other unsung fun moment comes from a very unsuspected character, Kristen’s therapist Dr. Kurt Boggs (Kurt Fuller). He’s decided to follow the team around on their latest investigation. It’s part of his finder’s fee, he brought the case to their attention and is owed bigtime for being bashed by Kristen’s paranoiac outburst. He wants to write a book about it, he tells Ben as the Magnificent one is listening to walls creak. Is he annoying? Yes, but it is all worth it for the way Boggs says “no” after Ben asks if David approved of his kibbitzing.

The countdown to ordination is running down and David is playing the field. But he’s not one for ex-priests who think the Catholic Church is too much like the mafia. David has more of a problem with Gregory Biel, the layman expert called to exterminate the demonic infestation, but who is really there for comic relief. His performance recalls both The Stupendous Yappi (Jaap Broeker) from The X-Files, and Mr. Bookman, the library detective from Seinfeld. If Leland gets any say in the investigative team’s personnel, Gregory is the obvious choice to replace Kristen. It’s written in his book, the “Gospel of Gregory.”

The “D Is for Doll” page in the Pop-Up Book of Terrifying Things MMXXI comes late in the episode, because Evil is toying with us. Eddie may correspond to the sigil or counteract its hierarchy, but it might be in need of a full set. Sheryl should try Etsy.