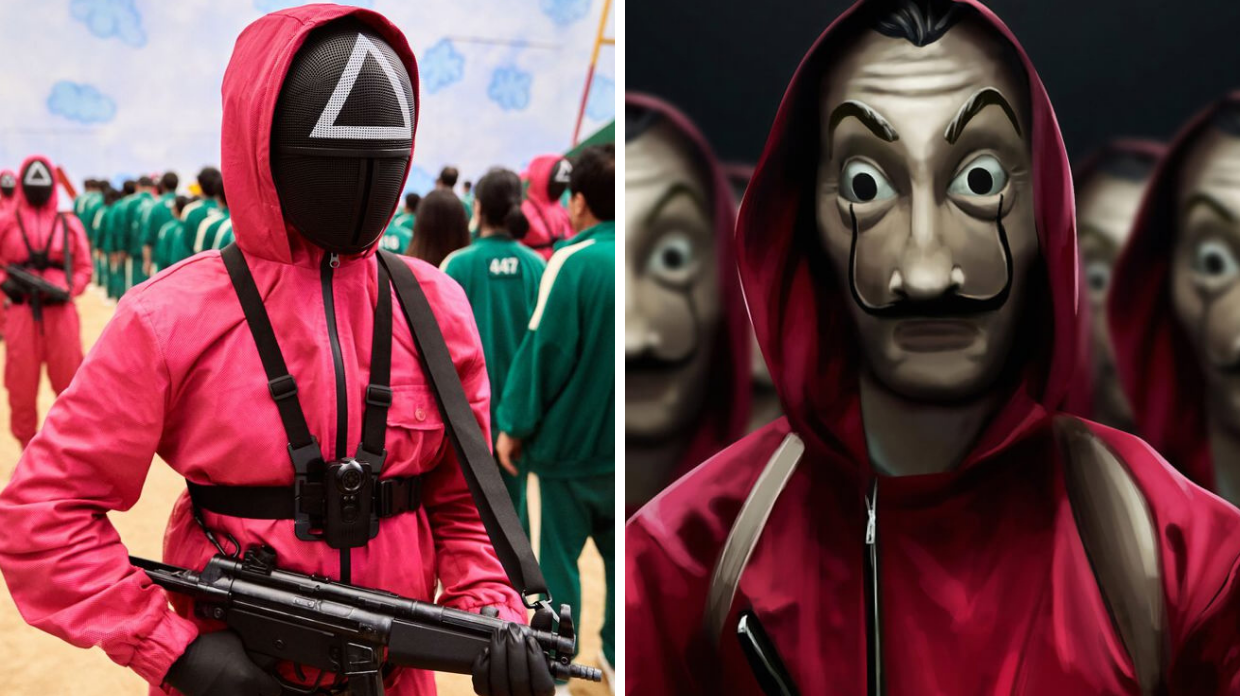 This Halloween is going to be all about masks and red hoodies. Two of this year’s hottest Netflix shows feature them prominently and the visual similarity is striking. In the South Korean breakout series Squid Game, supervisors wear bright red hooded outfits with black mesh face masks. The masks are emblazoned with a stark white circle, triangle or square, the symbols of the show. It’s a bold costuming statement that bears an uncanny resemblance to outfits in Netflix’s first global foreign-language sensation, the Spanish series Money Heist. In Money Heist, the captors and hostages wear red hooded jumpsuits and caricature Salvador Dali masks so the police can’t tell them apart. The Dali mask is the symbol of that show too. And both shows accessorize these costumes with full-auto rifles, leading many to comment on the similarities of the aesthetics.

Currently, there are only two foreign language series on Netflix’s Top Ten Most Watched List: The French-made series Lupin is second with 76 million views. Money Heist is sixth with 65 million. At this writing, the Squid Game numbers haven’t yet been released, but its popularity is surging quickly, so much so that it is already a major contender for the Top Ten. Squid Game memes are all over social media and there’s already been a run on those red hoody costumes, prompting Netflix’s co-CEO Ted Sarandos to say it “a very good chance it’s going to be our biggest show ever.”

Masks and red hoodies like these don’t figure into Lupin. The original series is based on Arsène Lupin, a fictional “gentleman thief” and a literary contemporary of Sherlock Holmes. The novel Lupin is the role model for the hero of the show, Assane Diop (Omar Sy). Consequently, Diop is too dapper for a bright red hoody (although perhaps it’s worth mentioning that in the popular Arsène Lupin anime, Lupin III occasionally donned a bright red sports jacket).

Squid Game, Money Heist and Lupin are three dramatically different shows, and yet there are some conspicuous parallels. Might these similarities be part of the formula to their global appeal?

It’s All About the Money

All three series center around the quest for a gargantuan prize purse. Both Money Heist and Lupin are about master thieves pulling epic heists. Both shows also have a comparable structure to their storytelling too. Invariably, things are not what they seem, and just when the thieves look like they might fail, there’s a twist that reveals it was a preplanned deception. When such a ploy plays out, there’s a flashback to the planning of the ruse. This narrative device showcases the cleverness of the heroes and their abilities to predict outcomes.

Consequently, much of the dynamic tension relies on a psychological chess game between the criminal masterminds and those who would bust them. In Lupin, it’s Diop versus Pelligrini (Hervé Pierre). In Money Heist, it’s the Professor (Álvaro Morte) versus Inspector Murillo (Itziar Ituño) and later Inspector Sierra (Najwa Nimri).

Squid Game isn’t about robbery in the same sense, but there’s a still big money prize – a giant piggy bank filled with Korean won. Nevertheless, the big payout is the overarching motivation for the game players, just like it is for the thieves of Money Heist and Lupin. All the characters in the three shows have bottomed out, forcing them into making desperate choices. They get trapped into extreme situations, however they got there by their own free will. They’re all betting their lives in hopes of cashing in on a huge jackpot.

All three shows center around criminals and losers, so none of them are the best parental role models. Squid Game’s Seong Gi-hun (Lee Jung-jae) is the epitome of a bad dad to his daughter Seong Ga-yeong (Cho Ah-in), gambling away her birthday money and trying to win her a present at an arcade. Lupin’s Diop’s career as a thief puts his son Raoul (Etan Simon) in jeopardy. Raoul’s kidnapping is the Season 1 cliffhanger, and his recovery is the focus of Season 2. Both Seong and Diop aspire to be good dads, but they fail.

Money Heist is a little more complicated when it comes to parental roles. There are several parent-child relationships in the show, each with its own unique complexities. While most of them serve to set up some sympathy for the plight of the characters, when you step back and look at it, they all make bad parental choices.

Nairobi (Alba Flores) had her son Axel taken from her and put into protective care when she was busted for dealing drugs. He is later used as a pawn expose her to sniper fire. Moscow (Paco Tous) is the father of Denver (Jaime Lorente) who joined the caper to help get his son out of debt. That’s almost like being a decent dad if you can overlook that he’s an ex-con who has pulled heists with his son before. Stockholm (Esther Acebo) begins as Arturo Román’s (Enrique Arce) mistress before falling for her kidnapper Denver. The series begins with her telling Arturo that she’s pregnant with his love child. In Season 3, Cincinnati (Luca Anton) is born, and Denver becomes his stepfather. However, Denver and Stockholm abandon Cincinnati with some monks so they can join the second heist. Lastly, there’s Sierra, who is so obsessed with pursuing the Professor, that she disregards her personal safety and jeopardizes her pregnancy. Now that she’s had her baby, we’ll see if she turns out to be a decent mom.

All three series are absurd yet engrossing binges. If you think too hard about what is happening, you realize just how ludicrous the stories are. Nevertheless, each show masters the setting up of addictive cliffhangers. The richly developed characters set in some exotic locales (although most of the action in Money Heist and Squid Game takes place in elaborate sets) keep us watching. Each show was also an unexpected hit. However, when it comes to Squid Game, we should have anticipated it.

Global interest has been growing for Korean culture since Psy dropped “Gangnam Style” in 2012 (don’t even get us started on BTS now). The 2019 film Parasite captured the coveted Palme d’Or and four Academy Awards, but it wasn’t the first South Korean project that caught the world’s attention. Others like The Handmaiden, Train to Busan, The Host and Burning spotlighted Korea’s unique visionary cinema. Korean TV series, or K-dramas, have also found a global audience. Paving the way for Squid Game have been shows like Kingdom, It’s Okay To Not Be Okay, Vincenzo and more. K-dramas have this astonishing ability to take old cliches into magical new directions that keep audiences hooked.

So did the Koreans steal masks and red hoodies from Money Heist? Probably not, but even if they had, that would be part for the course in the world of international TV, in which TV formats successful in one country are exported to others in the form of remakes. South Korea is currently in the process of remaking Money Heist for Netflix with a stellar Korean cast. Playing the Professor is Yoo Ji-Tae (OldBoy) and Tokyo will be played by Jeon Jong-seo (Burning). Park Myung Hoon from Parasite is cast as one of the hostages, presumably the variant version of Arturo.

As for what’s next for Netflix’s massively successful international dramas, even though Squid Game killed off nearly all its leading characters, the show left things wide open for a second season. Given its success, it’s just about guaranteed. There have been rumors about a third season for Lupin but nothing has been confirmed at this writing. The fifth and final season of Money Heist is coming soon.