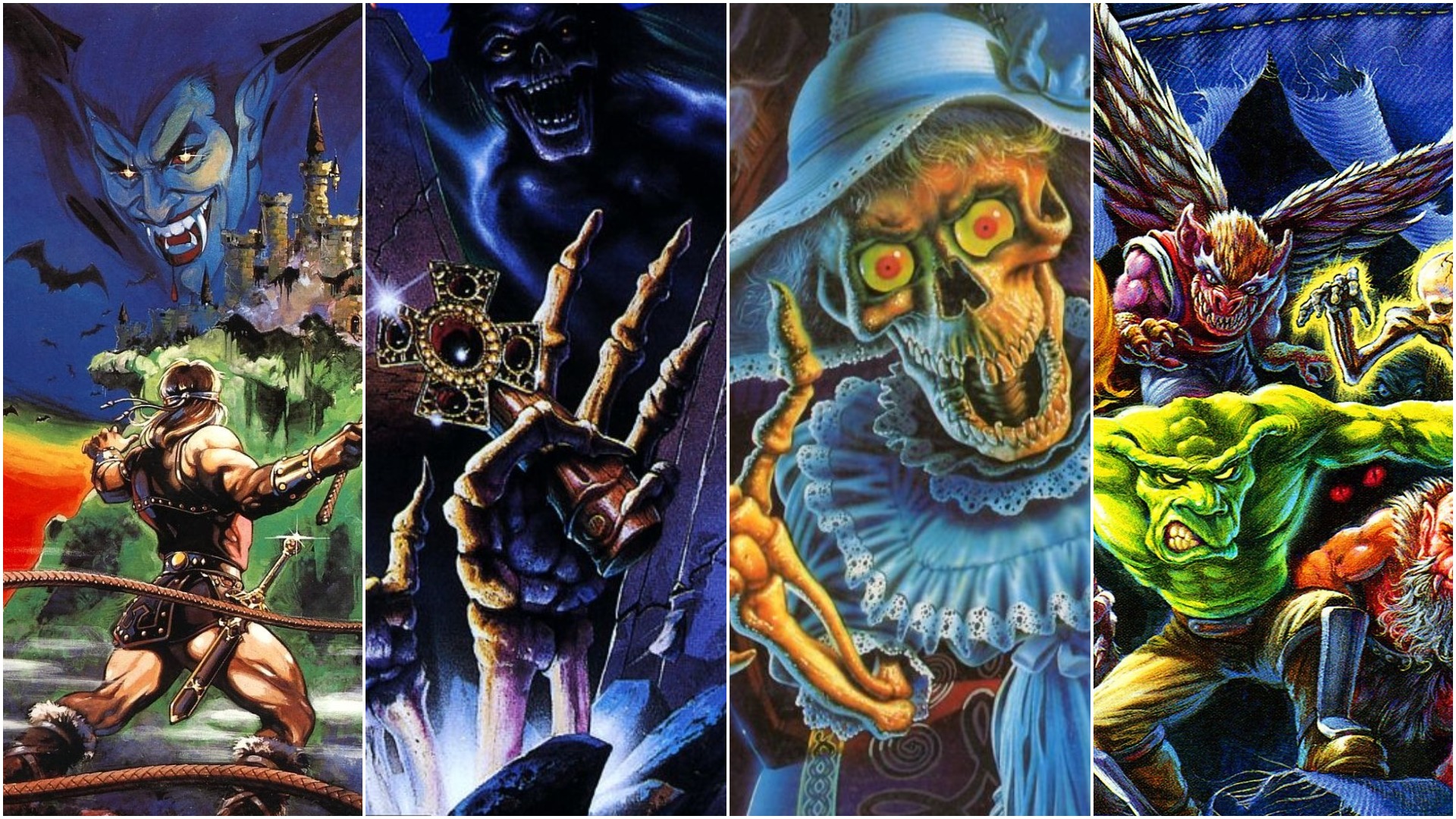 There’s no getting around the fact that the NES era isn’t generally considered to be the best time for horror games. While the popular narrative that horror gaming didn’t properly begin until Resident Evil was released in 1996 obviously isn’t accurate, it’s safe to say that the ’80s and early ’90s were a strange time for the genre.

In a way, though, that makes it that much more interesting to look back at the NES era of horror games and try to find the gems. Because there are so few stone-cold classics from that time, you’ve really got to dig deep into the unconsecrated ground of early horror games to find the titles worth talking about a little more.

A look at the best horror games from that time is less of a total celebration of every early experience and more of a necessary look at the early days of this genre and why it’s important to pay respect to the titles that were bold enough to be horror games at a time when everyone was still figuring that whole thing out.

Before we get into the list, though, here are a couple of notes to consider:

This unlicensed NES port of an obscure arcade game was only spoken of in hushed whispers during the ‘80s and ‘90s (when it was spoken of at all). It was one of the most controversial games of its time, and, to be honest, there’s almost no real merit to any version of this game beyond shock value.

Yes, we included Friday the 13th on our list of the worst NES games, but as I mentioned in my retrospective on the title, Friday the 13th can always boast the rare distinction of being a true NES horror game that’s actually fairly scary in its own right.

I almost never hear anyone talk about Dr. Chaos these days, which is quite surprising given that this, admittedly obscure, title had a lot of great ideas that were arguably ahead of their time.

The actual horror in this game is as simple as it gets (it’s a very “innocent” game in that respect), but the true star here is the gameplay variety. Dr. Chaos combines platforming, puzzles, and even early survival horror elements to form a strange beast that doesn’t always work but is usually fascinating.

Zombie Nation is an otherwise fairly standard shoot-em-up game that so happens to feature a strange horror setting that combines ‘50s sci-fi with mysticism. It also stars a giant floating samurai head trying to destroy the world, which is the kind of premise that really deserves at least some amount of credit regardless of the rest of the experience.

Along with being surprisingly difficult, Zombie Nation is a pretty rare game that regularly fetches high prices on the second-hand market. It’s not exactly a “good” game, but it is a fascinating retro horror-adjacent experience that tries its best to make a weird idea work.

11. Monster in My Pocket

Don’t come to Monster in My Pocket looking for much actual “horror,” but this 1992 game from Konami could easily be considered one of the NES’ most underrated overall experiences.

This strange adaptation of a comic book series sees you play as shrunken (and unlicensed) versions of Frankenstein’s monster and Dracula as they battle other shrunken versions of classic monsters. It’s just full of Universal-era horror love and that gameplay goodness Konami was known for once upon a time. There’s also an unlicensed version of this game called Batman & Flash that stars…well, Batman and The Flash.

Here we have another underrated NES game that arguably deserves to be remembered for how surprisingly “goopy” the whole thing is.

There’s an almost Giger-like quality to this game’s living environments and enemy designs. While this game rarely gets to properly showcase its best setpieces, there’s another sci-fi horror brilliance spread throughout to make this solid shooter an easy recommendation for genre fans looking for a retro fix.

To get the obvious out of the way, it must be said that Ghoul School’s poor visuals, choppy animations, and bad controls pretty much ensured it was destined to make a bad impression. Honestly, it’s a rough game to play to this day.

However, as an early example of survival horror, Ghoul School deserves at least a little more credit than it typically receives. This game’s RPG elements and labyrinth map make it a fascinating early prototype for the games that would soon dominate the genre. It may be more distinct than “good,” but it’s worth a second or first look for retro horror game fans.

Monster Party was reportedly supposed to be a much darker game, but I kind of love how campy and indescribably silly the final product is. There’s really never been another horror game like this, which is probably a good thing, but that doesn’t mean that Monster Party isn’t worth a look.

Shadowgate is one of two horror adventure games we’ll be talking about on this list, and while it’s not my favorite example of that particular concept on the NES, it is a fascinating dungeon crawler with surprisingly effective horror moments.

Shadowgate is ultimately an elaborate series of deathtraps that requires you to follow a pretty specific path in order to survive. It’s incredibly frustrating to play without a guide, but there’s something to be said for the way it makes you feel like you’re in a dungeon where some horrible death dealer is lurking around the next corner.

I probably don’t have to explain why Castlevania is on this list, but in case you’re wondering why it isn’t higher, it’s largely because there are other NES games that do the “horror” aspect a bit better than it does.

Even still, Castlevania remains one of the purest love letters to the horror genre that gaming has ever known. The Castlevania team recognized the perfect opportunity to cast you as the protagonist in a classic gothic horror adventure and fully realized the potential of that concept.

Yes, Maniac Mansion on the NES is a shell of the PC version of the game, but you still have to give the NES port credit for making a “close enough” version of this classic adventure title that allowed NES gamers to experience something truly different.

Maniac Mansion is a funny, strange, and yes, sometimes creepy journey through a haunted house that doesn’t feel quite like anything else out there to this day. It’s very genuine in its love of the horror genre, but it’s ridiculous enough to clearly distinguish itself from so many other worthwhile horror experiences.

Here we have another NES horror game that was the victim of some pretty notable censorship, but what’s really impressive about the NES version of Uninvited is how well the original experience translates to a much more family-friendly console.

This journey through a haunted house features some of the most memorable and genuinely terrifying imagery in NES history. While I doubt that it will scare modern gamers, you’d be surprised by how much fun it is to wander this game’s haunted halls.

The best retro Castlevania game ever made (and arguably the best Castlevania game) also happens to benefit from an extra infusion of horror that elevates it above its predecessors for the purposes of this particular list.

The Castlevania 3 team found a way to push the NES to its technological limits, and the result is a collection of environments and creature designs that still look surprisingly striking to this day. This one really makes you feel like you’re a true warrior wandering through a horror epic.

There’s no shortage of great Famicom games that sadly never made it to the U.S., but Digital Devil Story has to be considered one of the biggest missed opportunities for retro horror game fans living outside of Japan.

Essentially an NES-style JRPG with horror and sci-fi design elements, Digital Devil Story is a fantastic dungeon crawler that boasts some of the most memorable creature designs of that era. It’s a genuinely great piece of horror design that happens to also feature some great gameplay and a very good story. Seek this one out if you’ve never played it.

While I understand why it’s so hard to talk about Sweet Home without getting around to the fact that it was essentially the spiritual predecessor to the Resident Evil franchise, I don’t know if Sweet Home ever gets enough credit for being a genuinely great horror game in its own right.

Obviously, this early example of survival horror is limited somewhat by the technological restrictions of the NES, but I have to say that I genuinely love the way Sweet Home combines classic RPG and adventure design elements in such a way that essentially makes this a Metroidvania horror game. So far as that goes, it doesn’t hurt that Sweet Home features a plethora of genuinely scary moments.

This is clearly the best horror game on the Famicom/NES, but I honestly think there’s a strong argument to be made that Sweet Home is simply one of the best games of this era.