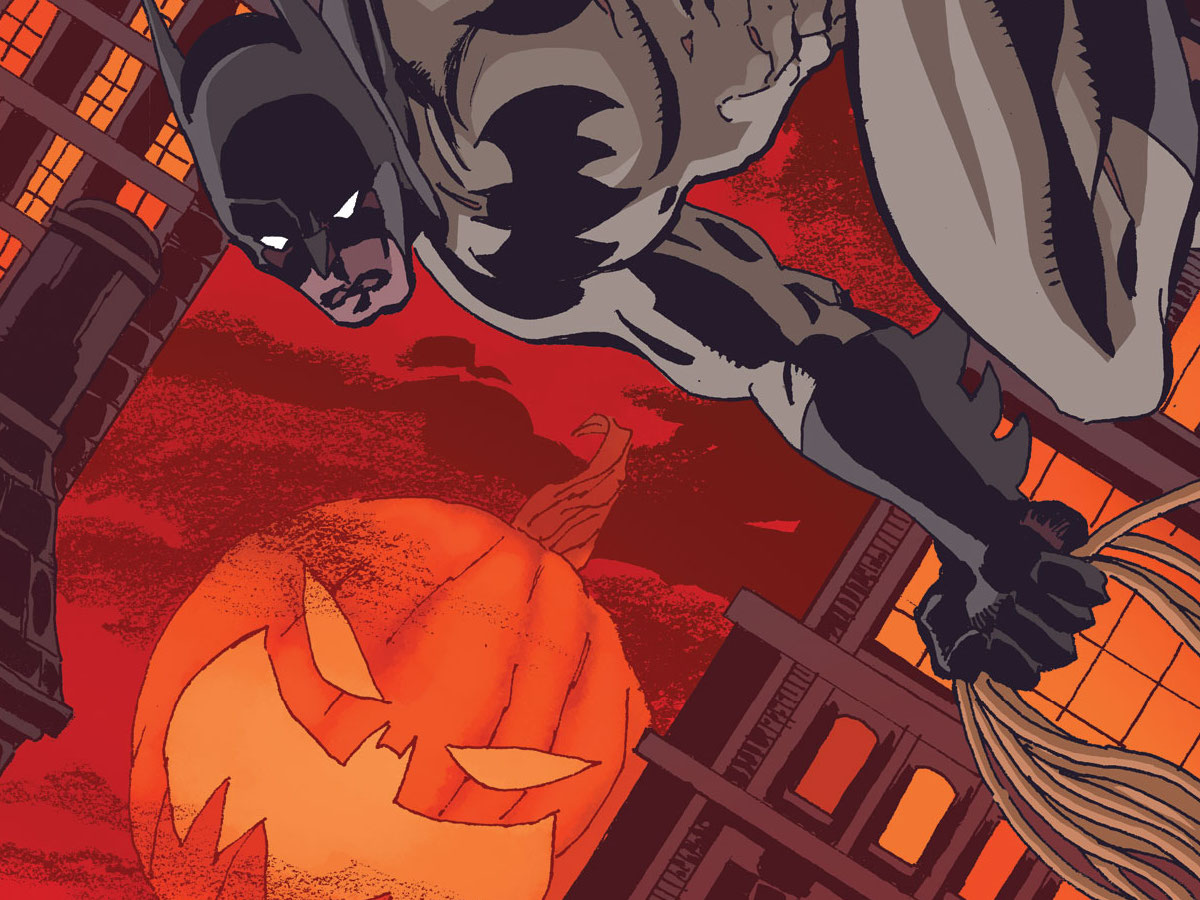 Gotham City is a familiar playground for Loeb and Sale, having kicked off their tales of Batman’s formative years with a trio of Halloween-themed specials in Legends of the Dark Knight, before the “real-time” month to month holiday-themed Batman: The Long Halloween. That was followed by Batman: Dark Victory, a sprawling Two-Face origin story that also brought Dick Grayson into the story, as well as Catwoman: When in Rome, which revealed new details about Selina Kyle.

The Long Halloween Special picks up threads from those stories, moving the calendar forward only slightly (it’s still early in the career of Batman and Robin) to give us another look at the gritty, street-level crime stories that have become a hallmark of the Loeb and Sale creative team. We spoke with them both on the occasion of The Long Halloween Special’s release.

Den of Geek: It’s been almost 30 years since you two first collaborated on your first Batman story. How has your creative process changed since then?

Jeph Loeb: That goes all the way back to 89. When we started, I didn’t know how to write a comic book. I had always heard these stories about how Stan Lee would talk to Jack Kirby and then Jack would sort of lay the story out, and then Stan would come in and put in dialogue or give him some ideas. And there’s some real questions as to how much storytelling Jack was doing all by himself.

But when our collaboration started, lo these many years ago, Tim and I didn’t have the internet or anything, we didn’t have a fax machine. So we would get on the phone and literally talk for hours about what would happen in a scene. I would describe it in cinematic terms: the camera is about a a mid-close up…and, you know, maybe there’ll be three horizontal panels. Tim would be taking notes, and I’m writing it on a yellow pad as we’re talking. Then he would send me the pages in the mail. So I would get them three or four days after he was done with them.

Archie Goodwin was our editor, and he said, “Jeph, I have to pay you, so you need to turn in the script.” And I went “you have the script, it’s the book.” “No, it doesn’t work like that. I need a physical script.” So I would literally go back and write a script…and I would just describe what Tim had done, then I would put in the dialogue that I put in.

That eventually got to a place where it just took so long for us to do anything that I had to start writing scripts. So I started writing them the way that I wrote movies and television, which was a lot of detail. It’s what a lot of people would call “full script.” But it’s always with the ideas that Tim had, and his right to be able to say, “this might work better if we do this” or “I don’t need this panel.” Some of the dialogue is in the main script, and then I would redo it when I got the final pages from Tim.

Tim Sale: When Jeph says “full script,” it’s not like an Alan Moore script or something like that. But that’s partly because of all that time we had spent talking, so by the time he got to actually having to write a script, he knew what to put in better and what to leave out. You know, “move the camera closer, Batman was grim, move it in closer again so it’s just his eyes and then pull back so we see the whole thing,” or something like that.

JL: Certainly I didn’t know as a comic book reader that with the best artists it’s a symphony. You’re following a rhythm and as you go from panel to panel, your eyes should lead you around the page so that it isn’t just a lot of power that’s coming out at you. Certainly there’s tremendously talented artists who do that and who get you excited by the image that’s on the page, but it doesn’t necessarily make for good storytelling.

And there’s things that Tim does on his own that I’m always amazed by. I’d written that scene [in Batman: The Long Halloween Special] where Gordon is going out trick-or-treating and he’s talking to his wife and you know they’re standing in the hallway. I wrote the scene at the door so I assumed it was going to be a door and the two of them and the kid and that was it. And instead what Tim drew is beautiful…there’s a hallway and stairs and there’s wallpaper and a closet and a door and…

Between the original Long Halloween and Dark Victory, you tell a sprawling Two-Face origin story. In The Long Halloween Special, Gilda and Harvey are once again at the center of this. What is it about Two-Face that makes you keep returning to him?

JL: It’s not because of Two-Face but because of Harvey. When we first set out to tell the story… I have to give credit where credit’s due which is Mark Waid heard we were doing a “year one” story and said, “I hope that you’ll take some time and delve into Harvey Dent. He’s a really interesting character.” And, and that really made it gel for me.

I had watched the documentary on The Beatles, and I had watched how these four very different men had come together and literally changed music. Then as quickly as it started, it ended. It gave me a sort of an emotional character drive. Because there were four men that were up on that roof: Batman, Jim Gordon, Harvey Dent, and Bruce Wayne. None of them knew that this character of Two-Face was going to come into their lives and really destroy it and and make it so that they would never be able to get back together again. Although, I’m always delighted when they attempt to try to cure Harvey and you know it’s one of the things that Batman addresses in this special before anybody has tried.

Dark Victory allowed you to bring in Robin, and he finally Robin gets a little bit more time in this than he did in that story. Tim, I was always struck by like the subtle redesigns that you did with Robin and the little bits of flair that you added to that classic Robin costume. How did you conceptualize some of that?

TS: It was probably ignorance. For one thing, Robin’s costume has changed in a number of times before I even got to drawing it. I don’t remember which particular iteration of the costume I looked at primarily. It wasn’t all the way back but I don’t remember really the first time I ever drew him.

I still depend on Jeph to try to catch me with little costume details. Stuff with the sleeves and the belt and the funky tights and the trunks…it all works better Dark Victory when he was a tiny little boy and it does as this young teenager.

How much time has elapsed between Dark Victory and this story?

JL: Not a lot. Kids grow very fast and so you know I kept referring to Robin as River Phoenix in Stand By Me. There’s a lot of questions as to how old Robin was when when Bruce found him. some people say eight, some people say 12.

I mean look, there’s only so many Halloweens. That’s one of the jeopardies of telling a story month by month. If, in fact Long Halloween starts on Halloween and then ends on Halloween, and Dark Victory starts the next Halloween, we’re at year four by the time we get out of those stories. And in my mind it’s all “year one-y.” If it could all take place in “year one” that would be great.

You do see Babs grow up and you do see that Jim’s son is no longer a baby, he’s about three. This is the fun of comics. How could Batman still be 35 years old when Robin is Nightwing and a grown man of 20 or 25, but Batman is still 35. So you tell me when it takes place.

TS: That’s why we set it in a very specific and yet unspecified timeframe. It’s just “early” and that that’s as much as we tie ourselves down to.

JL: It’s not as though people are standing around going “I don’t know what Batman is.” Some of that was because at the very beginning, Archie Goodwin, who will always be our inspiration and who was our editor said, “just make sure you’re not telling the first story of how these people met. Because that story may have already been told and you wouldn’t want anybody trampling on yours, so don’t trample on theirs.” We always sort of felt like this is the second story, or as I like to say, these are the stories that take place in between the stories that you know.

Batman: The Long Halloween Special is on sale now.