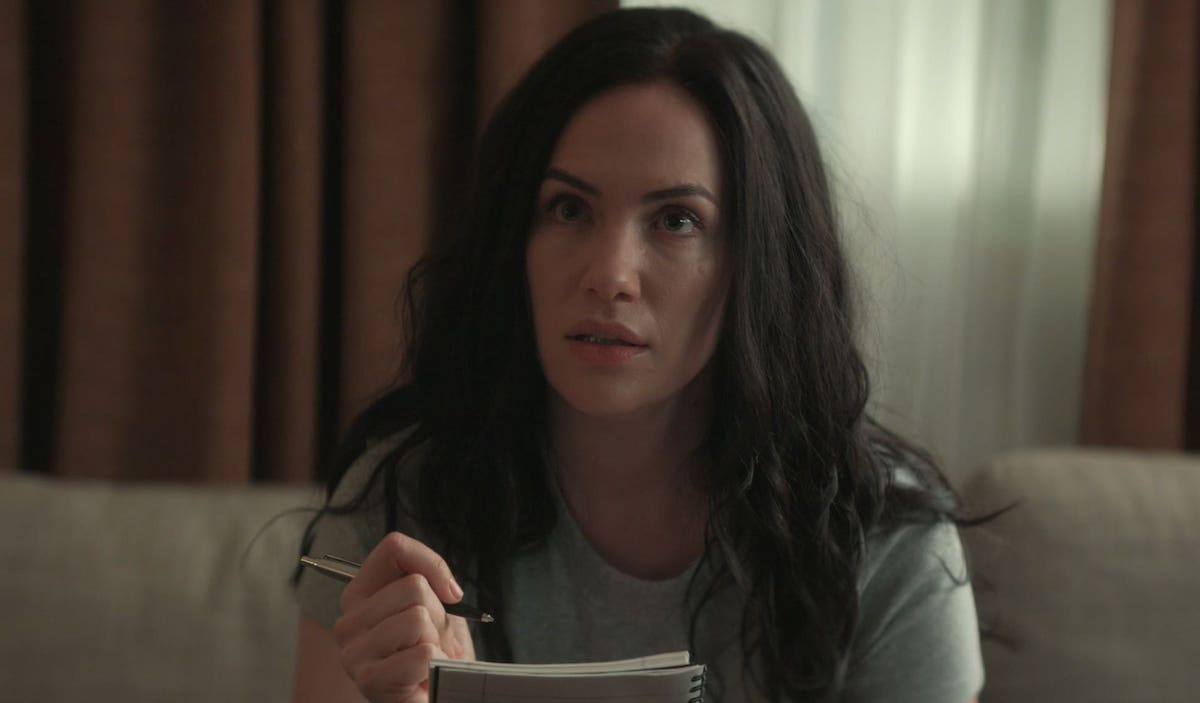 Hypnotic, the new Netflix thriller from directors Suzanne Coote and Matt Angel (The Open House), has arrived to scare the streaming service subscribers into a trance right before Halloween hits. Starring Midnight Mass’ Kate Siegel, Hypnotic centers on Jenn, a woman struggling after a miscarriage and who decides to seek professional help in the form of therapist Dr. Collin Meade (Jason O’Mara). Dr. Meade uses hypnosis on his patients to help them overcome their worst fears and Jenn decides to go under to determine how best to move on from her trauma and how to proceed in her relationship with her ex-fiancé.

After Jenn’s first hypnosis session, she blacks out in a grocery store parking lot. This occurred after she received a phone call from what sounds like Dr. Meade. When she comes to, she finds herself in her home with her ex-fiancé Brian (Jaime M. Callica) in anaphylactic shock. It appears he’s been fed sesame oil, which he is highly allergic toward. Jenn is aware of his allergy and has no memory of cooking the meal or anything after she received the call in the parking lot. She quickly determines that there must be some connection to the hypnosis, and after she brings her suspicions to Det. Wade Rollins (Dulé Hill), she discovers that Dr. Meade has a history of using “hypnotic suggestion” on his patients to deadly effect.

The ending of Hypnotic finds Jenn and Rollins discovering that Dr. Meade is actually named Julian Sullivan. Julian is the son of Dr. Xavier Sullivan, a man involved in the CIA’s MKUltra project during the 1960s and who taught his son Julian about hypnosis and hypnotic suggestion. Julian uses hypnosis on women who resemble his deceased wife Amy, placing them under hypnosis to act out his fondest memories of Amy. Jenn is the latest ringer for Amy, and Jenn’s “dreams” of romantic situations with Dr. Meade are implanted memories or actions acted out while Jenn was under hypnosis.

Trapped inside the former home of Xavier Sullivan, Jenn waits for Wade to arrive to her rescue. However, Wade struggles with Julian due to injuries sustained in a prior attack. Jenn fires a gun at Julian while he’s fighting with Wade and believes she kills her attacker. It’s revealed that this is all just more hypnotic suggestion, and that Julian came away from his fight with Wade basically unscathed. Trapped by Julian’s hypnotherapy trickery, Jenn’s last resort is waiting for Julian to use the phrase “my love” while under hypnosis. Jenn’s visit to a helpful, different hypnotherapist, Dr. Stella Graham (Tanja Dixon-Warren), allowed her to create a counter trigger for Julian’s hypnotic suggestion. Knowing that Julian referred to her as “my love” when Jenn recorded him during one of their sessions, “my love” is chosen as the counter trigger to free Jenn from all of Julian’s hypnotic triggers. When he utters the phrase, it works, freeing Jenn from Julian’s spell. She eventually recovers a weapon concealed on Wade’s ankle and kills Julian.

It’s a high-octane, reality-bending conclusion to a quick and fun horror thriller with such an interesting premise. There’s also some missing information in the backstory of Dr. Xavier Sullivan, should Netflix want to turn Hypnotic into a mini-horror franchise. We’ll have to wait and see if Hypnotic is able to cast Netflix subscribers under its spell, however.