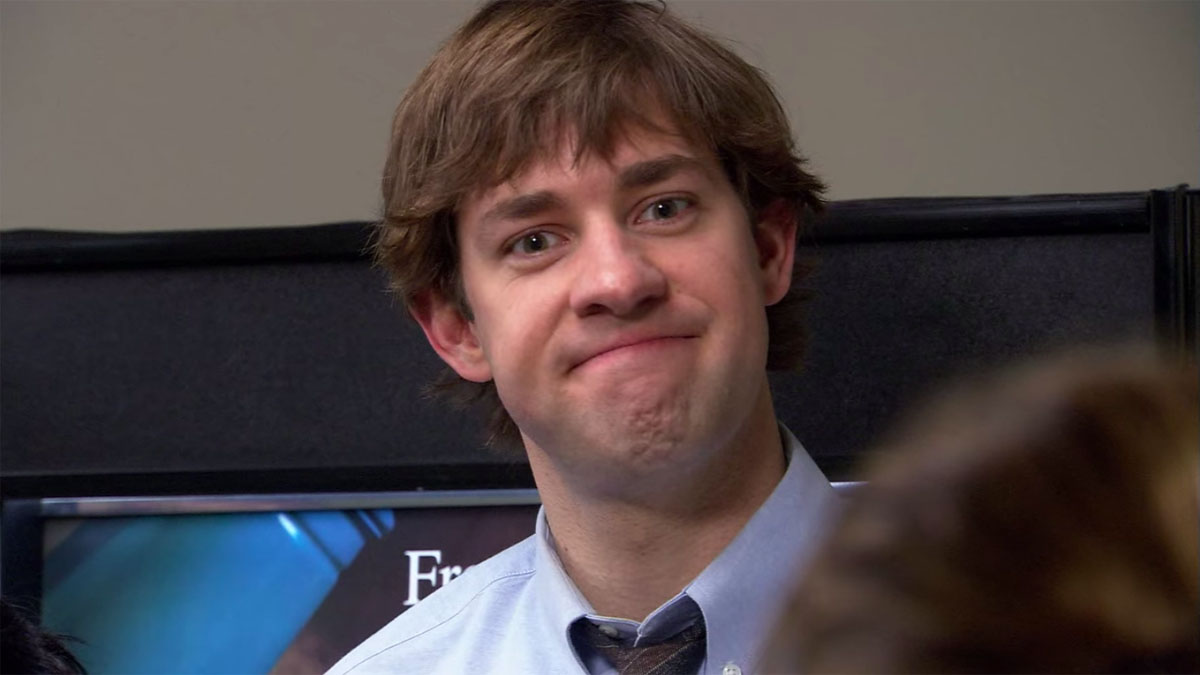 Remember when Martin Freeman played Tim on The Office (UK) and we all cried at the Christmas special when (SPOILER) he and Dawn finally got together? Wasn’t it wonderful?

Remember when Jim Halpert shouted down the phone at his wife Pam and made her cry when she accidentally didn’t record their daughter’s dance recital that he couldn’t go to because he was in Philadelphia (working at the company that he had invested in behind wife’s back)? Wasn’t it terrible?

Rewatching The Office: A US Workplace is problematic for many reasons; some parts of the show are uncomfortable to watch now (‘Diversity Day’, ‘Gay Witch Hunt’, basically most of what is said to Oscar… even Prison Mike makes me shift in my seat a bit these days). It’s undeniable that times have changed and some jokes have not aged well (Steve Carrell agreed there are some things that wouldn’t ‘fly’ these days in a 2018 interview with Esquire). Alongside all that, when I rewatch of The Office now I’m just bowled over by what a dick Jim is (just to be clear, I have nothing against actor-director John Krasinski who seems like a very nice man).

Jim and Pam are meant to be, we get it. He pined for her, he kissed her (while she was engaged to someone else), he strung along several other women (including the too-good-for-him Karen Filippelli played by Rashida Jones, and Amy Adams’ Katy, who he looked upon with total scorn) and then he finally won Pam.

Let’s take a minute to talk about Jim’s crimes against Karen; he encouraged her to move to Scranton (‘Branch Closing’, Season 3, Episode 7 – “Scranton’s not that bad so if they offer you a job there I think you should take it”) knowing full well he was in love with someone else and that Karen had feelings for him. Then when Karen gets to Scranton, everyone at the Scranton branch knows that Jim is in love with Pam, making a super-fun working environment for Karen. She’s then made out to be awful for attempting to live near him – not with him, near him (‘Back From Vacation’, Season 3 Episode 12) and for making poor old Jim stay up to try to talk through their problems (‘Ben Franklin’, Season 3 Episode 15). Justice for Karen!

You’ll recall Jim buying his parents’ house without telling Pam in ‘Frame Toby’, Season 5, Episode 8. It sounds romantic but… is it? How many of you would really want to live in your partner’s parents’ former home? Pam could never tell him if she hated the house, it’s literally his childhood home, and he’d already bought it! Of course Pam acted all swoony but I believe she really wanted to go full on Real Makeover: Home Edition on Casa Halpert.

Then, in a move that was not romantic in the slightest, Jim invested $10,000 (‘Here Comes Treble’, Season 9, Episode 5) of their savings (after they had agreed not to) in a company that is not even based where he lives with his family (I have Googled it and Scranton to Philadelphia is two hours by car and three hours by train) without telling Pam. The fallout of him making this decision is massive and Pam is left to look after their two children while Jim gallivants about at his stupidly named company (Athlead/Athleap – both moronic). Thank goodness she has lovely sound man Brian (‘Customer Loyalty’, Season 9 Episode 12) as a shoulder to cry on, because Jim’s shoulders are in Philadelphia. Then to top it all off at the panel in the finale, loads of idiotic women start digging at Pam (“If I had Jim he would have a free pass to do anything”) after he had finally seen sense (‘Finale, Pt 1’, Season 9 Episode 26). I don’t know who these women are (actors yes, I know) but, my goodness, does their treatment of Jim as some kind of demi-god for choosing his wife and children over his career fill me with rage.

Jim Halpert is a bully and terrible co-worker

I am not going to claim that I would enjoy Ed Helms‘ Andy as a colleague, but Jim really revels in his dislike for him. ‘Hilarious’ prankster Jim pushes an already volatile man over the edge and sends him to anger management by hiding his phone in the ceiling (‘The Return’, Season 3 Episode 14) but apparently that’s hilarious. Any consequences for the bastard’s childish antics? Absolutely not.

Dwight and Jim are willing adversaries throughout The Office, but Jim always starts it. I know, I know, he simply loves a prank but isn’t he just a bit mean? What are pranks if not bullying, with prep time? From the extensive list there are many that just seem a bit much (Pam, incidentally, is not blameless for her participation). There was the time they made Dwight think he has an ear condition called “pretendonitis” by making high pitched noises (‘The Coup’, Season 3 Episode 3), Jim intentionally slamming the brakes when Dwight said the back was the safest part of the car to sit in (‘Traveling Salesmen’, Season 3, Episode 13) and communicating with Pam in Morse Code to trick Dwight into thinking there was a bomb in the office (‘The Cover-Up’, Season 6 Episode 24) to name but a few.

Just because Dwight can take it doesn’t mean it’s right. One wonderful silver lining is that nothing makes me more gleeful when I rewatch The Office than the snowball fight when classic instigator Halpert starts something he cannot finish (‘Classy Christmas’, Season 7 Episodes 11/12).

So when it comes to Jim Halpert I have my feet firmly in the Toby Flenderson and Charles Miner camp – overrated and kind of a dick.

The Office is available to stream on Netflix.