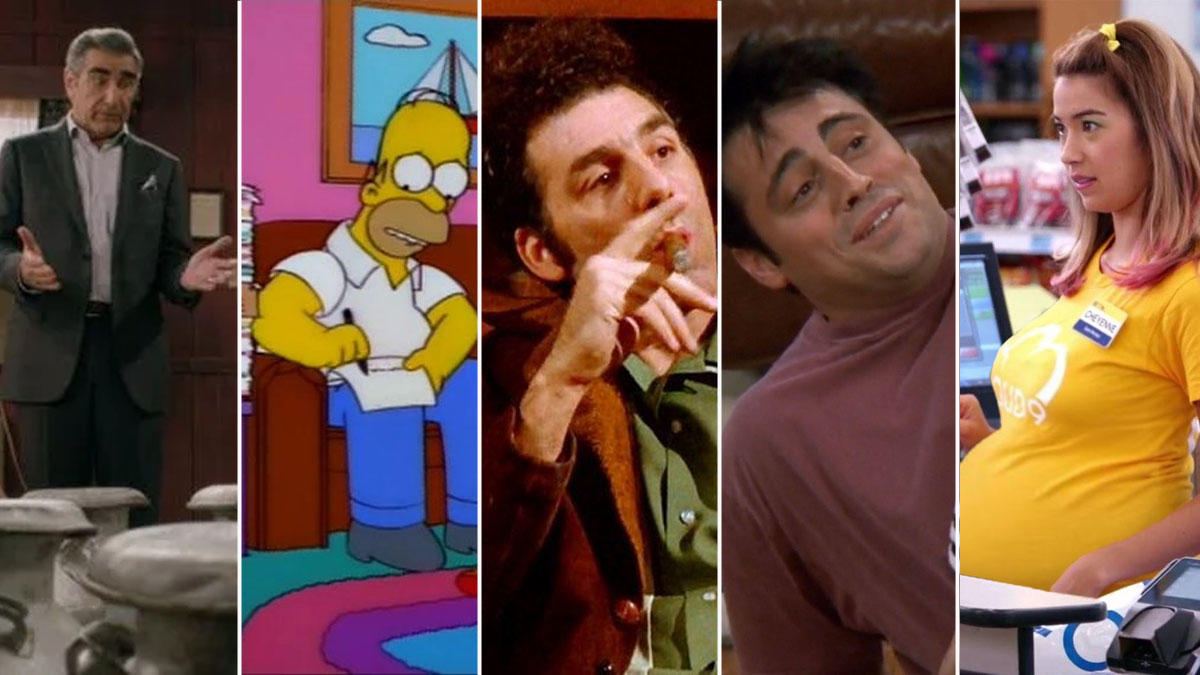 England and America are two countries separated by a common language but – as George Bernard Shaw would doubtless have added if he’d had a Sky TV package in the 1990s – joined by a common love of The Simpsons. Homer and co. are universal. It doesn’t matter if you buy your groceries at Walmart or do your big shop at Asda, The Simpsons speaks to us all.

Every so often though, what The Simpsons speaks to UK viewers is momentarily baffling – a reminder that wherever Springfield is, it’s not where we’re from. The same goes for other US sitcoms beloved in the UK. However much kinship we share, our rules are different. These are the American sitcom plots that introduced British TV fans to some of the curious legal differences between us.

In The Simpsons season nine episode ‘The Trouble With Trillions’, the people of Springfield rush to submit their annual tax returns before the deadline. “Would you look at those morons!” crows Homer, “I paid my taxes over a year ago!” When he finally submits his return, filled with false information, he’s arrested for tax fraud. Unworldly Brits watching this unfurl won’t have been fazed by the ludicrous undercover FBI mission Homer’s forced to undertake in Cuba as a result (we assume that’s just how the FBI works) but they will question why a full-time employee had to submit a tax return in the first place. (In the UK, only the self-employed submit a return, otherwise you’re taxed at source via your employer.) Horizon broadened.

Bet you didn’t think you’d read the words “cow-share agreement” today, but get ready, it’s coming. At the start of (Canadian-made but vaguely US-set comedy) Schitt’s Creek, Johnny Rose is seeking any opportunity to reclimb the ladder after losing his millions and being reduced to living in the backwater US town he once bought as a joke. In season two episode eight ‘Milk Money’, Johnny seizes on a scheme to make a buck in the raw milk trade. It’s illegal to sell, but apparently fetches a pretty penny. The plan is messed up when his daughter Alexis over-orders and they’re stopped by the police, who make them dispose of every illicit drop.

As long as it’s not in retail shops, citizens of every country in the UK bar Scotland (the sensible one in the family) are allowed to buy and sell unpasteurised milk filled with potentially lethal bacteria from farmers’ markets and specialist dairies, as their inalienable right. (What Schitt’s Creek doesn’t tell you is that the legal status of raw milk varies from state to state in the US. It’s only technically illegal to sell it over state lines, and it’s widely permitted for pet feed and under cow-share agreements. So now you know.)

When it comes to healthcare in the UK, we really don’t know we’re born. And thanks to the NHS, when we are born, our parents don’t take a hefty bill home from the hospital along with the baby. Thanks to Aneurin Bevan et al, our National Insurance contributions go towards a healthcare service that’s free at the point of delivery, meaning that we’ll never end up like Joey from Friends in ‘The One Where Joey Loses His Health Insurance’ needing to drum up work while bent double in pain from a hernia because we can’t otherwise cover the hospital fees. It’s all made clear in season one Scrubs episode ‘My Two Dads’, when JD falls out with Dr Cox after correcting a ‘mistake’ Dr Cox made by assigning medical tests to a dead patient. It wasn’t a mistake, but a well-meaning form of fraud that would let Cox treat an uninsured patient who wouldn’t otherwise be able to afford the care.

See also: Friends season 6 episode 4 ‘The One Where Joey Loses His Health Insurance’

Jaywalking… as seen in The Big Bang Theory

Apparently in the real world, jaywalking isn’t as big a deal as it’s made out to be on American TV (and the rules vary from state to state), but still, to UK viewers, the idea that you can be fined or even arrested for crossing a road outside the designated crossing zone is wild. Sheldon explains in The Big Bang Theory season nine episode ‘The Big Bear Precipitation’ that a police officer once witnessed him jaywalking but failed to do anything (prompting Sheldon to taunt him until he was arrested, as is good and proper). Who even is Jay anyway? What a world.

Illegal Cuban cigars… as seen in Seinfeld (and everywhere)

The US-Cuban trade embargo never really came up in the UK history curriculum at school, which left the illicit cachet of Cuban cigars on US TV a mystery to uneducated Brits like me. Kramer burning down George’s fiancée’s dad’s cabin with a Cuban, and attempting to start his own cigar-rolling production line, were US sitcom moments tinged with mystery, much like any and all references to baseball.

See also: How I Met Your Mother season 3, episode 15 ‘The Chain of Screaming’

In The Mindy Project, Dr Mindy Lahiri is an OB-GYN engaged in an ongoing feud with her practice’s upstairs neighbours, the midwives (played by the Duplass brothers). Her beef is that midwives rely on new age therapy and crystal healing to deliver children, and only do so outside of hospital settings. In the UK, midwives are generally who deliver our babies, and they do it in hospital (or wherever the baby happens to be at the time of arrival), working alongside nurses and doctors, with medicine and ventouse cups and whatever else is required. They don’t perform surgery, but they’re certainly not alternative therapy incense burners. Just watch Call the Midwife – those nuns are serious.

Honestly, this blew my mind as a child and continues to do so every time there’s a Drivers’ Ed scene in a US sitcom. When British teenagers need to learn how to drive, they usually have to pay a private instructor (or beg a willing relative) for individual lessons, then pass a theory and practical test. All of this happens independently of school. But in US sitcom-land, kids learn to drive at school, like an ordinary class (albeit one that usually incurs a cost). Slater and Zack do it in Saved by the Bell, so it must be real. Once again, what a world.

Statutory maternity leave is not a thing… as seen in Superstore

In NBC sitcom Superstore, full-time employee Cheyenne gives birth at work, but isn’t entitled to paid maternity leave. Her colleagues take up a charity collection for her, and her kind boss finagles her a two-week suspension on full pay (but loses his job in the process). Eligible full-time employees in the UK have to take at least two weeks’ statutory maternity leave (four weeks if they’re a factory worker) and can take up to a year, with six weeks on 90% of their normal pay and a further 33 weeks on minimal support. Though there are, of course, increasing ways for companies in the UK to duck out on their responsibilities through zero hours contracts and the like.

Unionising is a dangerous business… as seen in The Office: An American Workplace

It’s not legal, but according to sitcoms, ways can be found for unionising workers to be let go from their contracts, as threatened by Dunder Mifflin boss Jan when Michael Scott unwittingly encourages the Scranton warehouse crew to unionise in season two, episode 15 ‘Girls and Boys’. Trade unions, and the covert way employees have to go about joining them and arguing employee rights, make up a major part of the storyline in Superstore season five, which is essentially a course in the injustices perpetrated by modern capitalism on the worker, but with gags. There’s obviously a complicated history between unions and employers in the UK too, but to oversimplify greatly, being a member here seems less fraught with threat.

All that, plus: having to pass your practical driving test every few years to retain your license, as David does in Schitt’s Creek, the open container law meaning all the street drunks on The Simpsons sip their hooch from a bottle hidden in a brown paper bag, university costing not just an arm and a leg, but every limb going as seen in various places, probably including the aptly-named-for-this-discussion A Different World.

Read about the best comedy TV shows of 2020 here.