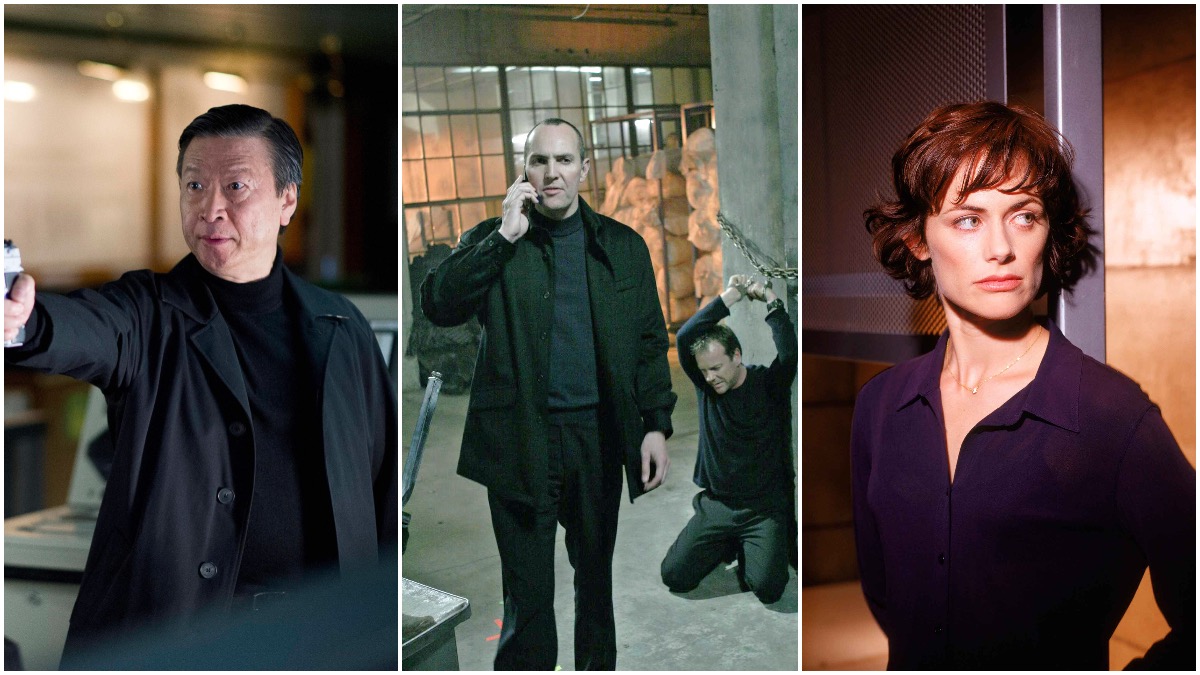 When it comes to reasons to watch classic Fox action series 24, its villains tend to end up pretty low on that list.

The biggest draw of the show, which celebrates its 20th anniversary on Nov. 6, is undoubtedly its unique format. Each season takes place over the span of a day and in real-time, meaning that a season’s 24 episodes make up 24 real-time hours (with some carve outs for commercials, of course). Then there’s the show’s hero, Jack Bauer. The character brought to life by Kiefer Sutherland begins as an ex-military counter terrorism unit bureaucrat before slowly blossoming into one of the most ruthlessly efficient killing machines in pop culture history.

Amid all that excitement, it doesn’t much matter who the villains are. Jack could be tracking down and assassinating Sesame Street muppets and the thing would still work. And honestly, that would have probably been preferable when compared to 24’s oft-racist depiction of generic Middle Eastern terrorists. Still, some 24 villains deserve commendation. It’s not easy to survive, let alone stand out on a show featuring Jack Bauer. Here are 10 that come pretty close to doing so.

Note: The Tony Exception – You will not find Tony Almedia (Carlos Bernard) on this list. Because Tony Almedia is an ally-turned-antihero, not a villain. We will not discuss this further.

I can’t find it now and I trust that it’s been lost to internet history, but EW (then fully branded as Entertainment Weekly) once hosted a conversation between 24 showrunner Howard Gordon and the executive producer of a daytime soap opera (whose name I also cannot remember but I swear this happened!) to talk about how they would run each other’s show’s. This conversation came well before 24’s sixth season and one has to imagine whether Howard Gordon took that soap opera producer’s advice.

Installing Jack’s own father Phillip (James Cromwell) as the big bad of season 6 is absolutely a move straight out of a soap opera. And the choice was weirdly fitting for the increasingly operatic drama of 24. Phillip founded BXJ Technologies and got a taste for corporate villainy. He worked behind the scenes in the Sentox nerve gas conspiracy of season 5 and conspired with Cheng Zhi to advance China on the world stage. That’s a lot of villainy for one man but thankfully Cromwell is the kind of actor who has the gravitas to pull it off.

Most seasons of 24 fall into a comfortable two-part rhythm. The first half deals with Jack trying to halt a terroristic threat (usually originating from Islamic radicals in the Middle East, or Eastern European separatists) while the second half then has Jack uncover the real money behind the operation (usually a corporate creep or politician). When it comes to the second part of that 24 villain formula, Stephen Saunders is one of the show’s better “man behind the curtain” string-pullers.

In a very GoldenEye move, 24 presents Saunders as an ex-MI6 agent and an associate of Jack’s, with the two being the only men to survive the ill-fated “Operation Nightfall” to take out the Drazen family in Kosovo. Rightly disillusioned by Western government’s inflated intelligence/military apparatuses, Stephen uses a dangerous virus and a Mexican cartel to try to force the United States to dismantle it. Little does he know that the U.S. government will do pretty much literally anything other than disarm. U-S-A! U-S-A! U-S-A! U-S-A! Anywho, Stephen Saunders was right and that earns him a spot on this list.

Throughout its nine-season plus a movie run, 24 increasingly struggled with diversifying its villain pool. There are only so many times that one can return to international terrorism without it getting tired. We know this because 24 did it a lot and it did, in fact, get tired. 24: Redemption and season 7 villain Benjamin Juma (Tony Todd), however, was a breath of fresh air. Operating a rebel group in the fictional African nation of Sangala, Juma was a successful coup leader that somehow earned political recognition from the U.N. (and who also regrettably slaughtered tens of thousands of civilians).

Juma is a successful villain because he does something that no other 24 villain does – he successfully storms and occupies the White House. Though he is ultimately killed by Jack, that level achievement is quite rare for 24 baddies. He’s not the big bad of season 7 as that “honor” goes to Starkwood CEO Jonas Hodges (Jon Voight). But Tony Todd was Candyman and Jon Voight wasn’t, so he’s the real winner of this season.

Victor Drazen is the first big bad on 24 and in many ways he set the template for what’s to come. Drazen is played by a big name star in Dennis Hopper (similar to James Cromwell as Phillip Bauer and Jon Voight as Jonas Hodges). He also has a personal connection with Jack’s history (like Stephen Saunders and the upcoming Christopher Henderson).

Above all else, however, he’s just a formidable opponent. The plot of 24’s first season is a big one. Some unknown actor is pulling the strings on a massive conspiracy to kill both Jack and Senator David Palmer. It takes a performer with the gravitas of Dennis Hopper to really pull it off. This guy quite simply looks like a video game boss.

Of all the 24 villains that have a personal connection to Jack Bauer, only Nina Myers represents a more acute betrayal. Christopher Henderson (as played by Peter Weller a.k.a. RoboCop) was a former Director of Field Operations at CTU, much like Jack. In fact, Jack worked directly under Christopher and considered him a mentor.

When Christopher turns to the dark side, working with Phillip and Graem Bauer as part of the Sentox nerve gas conspiracy, it presents a compelling “what if?” in the 24 universe. What if someone as capable as Jack Bauer decided that working with the U.S. government was pointless and opted to freelance for whoever was the highest bidder. Well, it would look quite a bit like Christopher Henerson’s arc here. This is one of the few 24 villains that we wish lasted for more than one season.

Bane holds a special place in Batman’s rogue’s gallery as the only man to have “broken the bat” by cracking Bruce Wayne’s spine over his knee like a frustrated baseball hitter snapping his bat in two. When it comes to 24, Cheng Zhi is very much the man who “broke” Jack Bauer.

This Chinese diplomat played by Tzi Ma isn’t as physically imposing as Bane, but the psychological torment he puts Jack through in a Chinese prison has pretty much the mental and emotional effect of breaking Jack’s back. Cheng is an unusually prolific villain for 24, appearing in parts of at least four different seasons. He also has perhaps the coolest death scene thanks to Jack’s quick thinking and creativity with a katana.

It’s no secret that 24 sometimes got so intensely bizarre that topping itself from season to season became all but impossible. All the ludicrously fun storytelling reaches its arguable height in season 5 when its revealed that NONE OTHER THAN THE PRESIDENT OF THE UNITED STATES, Charles Logan (Gregory Itzin), is at the top of a vast criminal conspiracy that includes multiple prominent assassinations and the selling of dangerous nerve gas to terrorists with the goal of getting some of Central Asia’s oil.

Charles Logan is a wonderfully corny and fun villain in 24 season 5. When he turns up in later seasons, he’s somehow even better. He’s not a particularly dangerous physical threat to Jack but his unique position in the American government makes him a tough target to deal with. Also, no other actor hammers home the true terror of seeing Jack Bauer coming to get ya’ quite like this guy. With his uniquely Nixonian visage, Gregory Itzin was perhaps always destined to play loathsome bureaucrats. He still outdoes himself with Charles Logan.

If Jack Bauer has a nemesis, then Nina Myers (Sarah Clarke) is it. Nina Myers is the first of many moles to operate out of the Counter Terrorism Unit Los Angeles bureau and her betraryal is undoubtedly the worst. Nina is CTU’s second-in-command, Jack’s closest friend, and also his former lover. In the show’s first season, there is perhaps nobody less likely to be CTU’s mole…and that’s obviously why she had to be it.

Nina really should have been 24’s best villain ever. That Benedict Arnold-level backstabbing is not easily forgotten and she’s also just a capable schemer and killer to begin with. As we saw with Christopher Henerson and later Tony Almeida, a CTU agent turning to the dark side creates a very formidable villain. The only reason that she doesn’t top the list, however, is that her reign was unfortunately short. We don’t blame 24’s producers for killing Nina off in season 3. No one knows how long any show will last and you’ve got to put your best storytelling foot forward. But not having her for the series’ final six seasons is still a bummer.

Jack Bauer’s level of competence is almost supernatural. He’s so effective at his job that he might as well be an Uncle Sam-themed superhero. That poses a big challenge to many of 24’s would-be villains. When Jack Bauer is a super soldier who is all but guaranteed to win, who could possibly meaningfully oppose him? That’s what makes season 4 villain Habib Marwan (Arnold Vosloo) so impressive.

Though Jack does eventually stop Habib Marwan’s reign of terror in season 4, it’s hard to argue that the Turkish badass wasn’t wildly successful before then. On “Day 4” of 24, Marwan: bombs a train in Santa Clarita, kidnaps the Secretary of Defense, gains access to six American nuclear reactors, kills countless federal agents, shoots down Air Force One with the president inside it, and ultimately launches a nuclear missile.

Season 4 is an odd duck among 24 seasons in that it doesn’t maintain that two-part format of first terrorist threat, then man behind the curtain revealed. Habib Marwan essentially occupies both roles and in the process becomes Moriarty to Jack’s Sherlock Holmes.

Perhaps this seems like a curious choice at first. Mandy (Mia Kirshner) was only ever a minor villain on 24. After appearing in the series’ very first scene, she would pop up occasionally as a murderess for hire to the highest bidder. Hell, Jack and Mandy barely even share any screen time. But she is unique among her fellow 24 villains in one crucial way.

Look at the rest of the choices on this list. Notice anything in common? That’s right: they’re all dead (save for the squirrely Charles Logan). As of 24’s conclusion with 24: Live Another Day and 24: Legacy, Mandy is not dead. That alone makes her the most impressive villain in the show’s history.