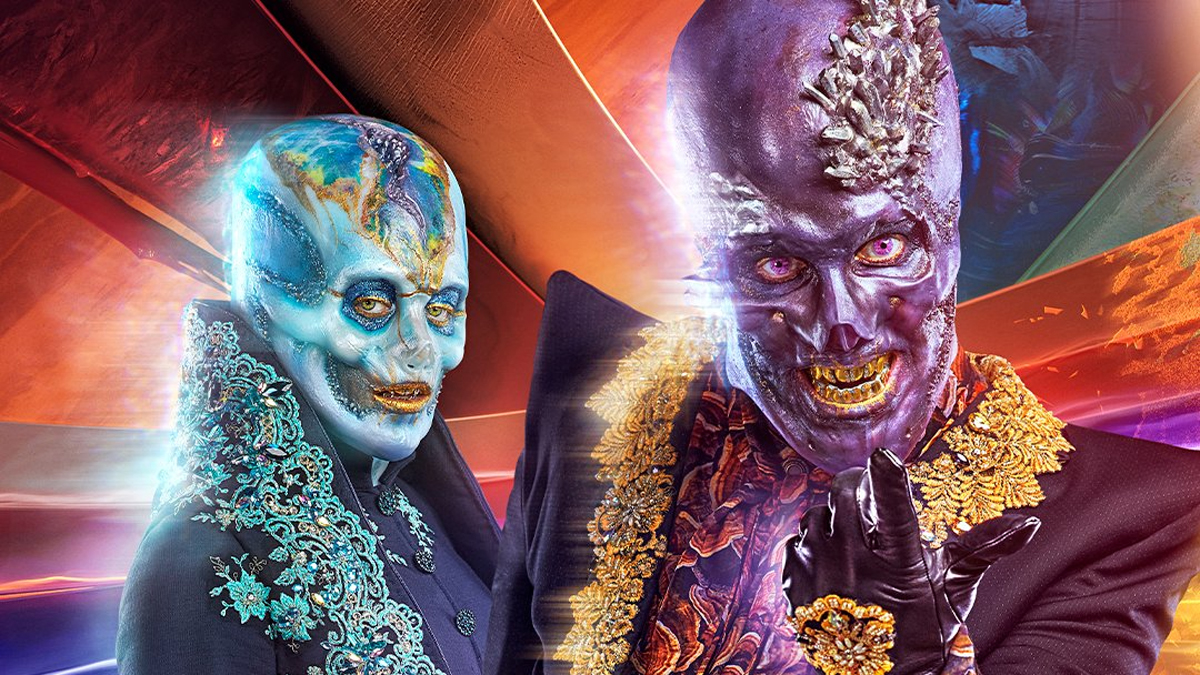 Warning: contains spoilers for Doctor Who: Flux ‘War of the Sontarans’

He waited. He planned. And now, he’s going to execute. That’s what Swarm told Division Agent K-Toscs before doing exactly that and blasting her into a billion pieces of glittery cloud with the touch of his hand in ‘The Halloween Apocalypse‘. Swarm had already paralysed and drained her boss of life, absorbing her energy to fuel his revivifying ‘renewal’, and psychically fritzed his containment chamber to escape a millennia-long incarceration.

All of this action was beamed direct to the Doctor’s brain via a reactivated psychic link she once shared with Swarm in a lifetime beyond her memory. (Imagine the inconvenience of everyone you’ve ever had a psychic link with being able to switch it back on at will – the WhatsApp group you can never leave.)

Giving the Doctor a front row seat to his escape scene was Swarm’s opening gambit in what he says is their “final fight”. They’ve had loads of fights before, but the Doctor can’t remember any of them because it all presumably happened while she was an agent of The Division. (The shady Time Lord organisation who recruited the Doctor as one of their agents and then, when they let her go, wiped her memory of all previous regenerations and rebooted her as a child to live the Gallifrey, Academy, TARDIS-thieving life we’re all familiar with.) So, who is Swarm?

The Swarm is a Time Lord/The Master Theory

Swarm’s ‘renewal’ from actor Matthew Needham – credited as Old Swarm – to actor Sam Spruell shared more than a little with a regeneration (pain, lights, screaming, bits of face going in and out) has understandably given rise to the theory that he’s a Time Lord. Add to that the fact that, as a general rule, the Doctor’s previous psychic links tend to be with other Time Lords such as past Doctors and the Master, and you can see the logic. Swarm did say that his and Azure’s names were approximate translations. Should fans be on the lookout for another Melody Pond/River Song game?

Somewhat less logical is another theory that Swarm is somehow the Master. As the Doctor’s centuries-long frenemy who has form when it comes to draining the life force of passers-by, there’s some sense to it, but the timeline doesn’t work. If Swarm dates back to the Doctor’s Division days, then he can’t be the Master (never mind the fact that Swarm is supposed to have been chained to a pole in a quarry since the dawn of time, which would inhibit his participation in the Master’s various schemes). The Doctor and the Master first met as kids after the Division wiped her memory and made her a child again. He said so in ‘The Timeless Children’ and when has the Master ever lied?

That’s not ruling out the possibility that Swarm’s ‘renewal’ somehow links him to the interdimensional portal people from whom the Doctor/the Timeless Child is now supposed to have sprung. Who knows, perhaps the Doctor’s true form is a Lush bath ballistic dressed as Lawrence Llewellyn Bowen.

Wherever Swarm comes from, he’s clearly out for revenge against the Doctor, who was likely the Division agent that locked him up on the remnants of the Burnished Rage battleground in the first place. If so, then the Doctor foiled Swarm’s last attempt to do whatever it is he’s doing, so odds are she’ll be able to stop him again. The difference being that this time, he has what you might call the home advantage of being the only one knowing what’s going on, and has had thousands of years to perfect his scheme. Which is what, exactly?

Swarm’s first destination – after a quick visit to Prince’s tailor – was the Arctic Circle, from where he retrieved his sister Azure (Rochenda Sandall). She’d been living there as a human until big bro blasted her disguise away to reveal her true alien form – a sort of posh Christmas tree ornament with rapper teeth and a taste for embellished tailoring that even a matador might tell you to tone down a bit.

Azure’s first villainous act was the kidnapping of Di, Dan Lewis’ potential love interest from National Museums Liverpool. Di was telepathically compelled by Azure inside a creepy house, which turned out to be a portal to a mountain-surrounded sea. “We’re going to have fun with you!” laughed Azure, creepily. Laughing creepily, turning people into ash, and a statement collar are so far Azure’s top three faves.

The Temple of Atropos

The siblings’ next move was arriving at the Temple of Atropos (likely inspired by the Greek goddess of the same name, which roughly translates to “inflexible or unchanging”. Atropos was the one of the three Fates or Moirai responsible for ensuring that people followed the lives they were destined. She was in charge of the death side of things). As well as the power of telepathic communication and ash-ifying things with a single touch, the Ravagers also have the ability to teleport. They appeared to arrive directly inside the Temple without a ship, and once there, zapped cockily from place to place, avoiding Vinder’s fire. (Vinder didn’t think to turn his gun on their companion, Passenger, who may not have shared their teleportation power, but was admittedly a 7 feet tall goth Skeletor, so not someone you’d want to provoke.)

Swarm tells us that whatever heinous scheme originally landed him in space prison at the dawn of time started right there at the Temple of Atropos. Millennia ago (though as the Spatial-Temporal readings on Planet Time are an impossible zero according to the Doctor’s Sonic, perhaps millennia ago means last Tuesday, or twenty minutes from now) he and Azure attempted to mess with the Mouri, who seem to be the universe’s plumbing system for time. When all’s well, it flows through them and runs in the right direction. When all isn’t well, it gets backed up and starts spurting out in unexpected places.

The Flux and the Malfunctioning TARDIS

The Flux is currently sweeping the universe disintegrating things, “disobeying every law of time and space, disrupting every particle it comes into contact with”. That’s what’s responsible for the damage to the Temple and the Mouri, say the Priest Triangles, which has caused time to run wild. That’s what’s been playing havoc with the TARDIS which sort of… eats time to get around, making it swap its doors about, erupt in slimy crystalline growths and sound its wild-catastrophes-only Cloister Bell.

Swarm and Azure are laughing their heads off at all this. For some reason, they want time to flow around the universe uncontrollably and not through neat Mouri pipes. What we don’t yet know is their relationship is to the Flux. Did Swarm cause the Flux, or did the Flux turn up and somehow give Swarm the power to break free of containment and embark on this scheme? When Azure turns the lovely chippy priest triangle to ash in ‘War of the Sontarans’, she tells Swarm that “it” is stronger this time. Does she mean their power? What is its source? Who is the Passenger? What is Planet Time? And what was all that about time being evil and seeking its own? So many questions.

Plus one more: what is behind Yaz and Vinder and Joseph Williamson etc. being zapped to the Temple of Atropos to perform repairs? As well as Swarm, Azure and the Flux, there seems to be a power trying to combat the end of the universe through the Doctor and her companions. Intrigue! Time will tell, and with just four episodes left to unravel all these mysteries, it had better get a wriggle on.

Doctor Who: Flux – Once, Upon Time airs on Sunday the 14th of November on BBC One, BBC iPlayer and BBC America.

The Boys Season 3: How That Imagine Video Came Together
How The Superman & Lois Season 2 Finale Sets Up Season 3
Evil Season 3 Gives in to a Sex Demon
Elvis: Where You’ve Seen Austin Butler Before
Shadowhunters Season 3 Episode 12 “Original Sin” | AfterBuzz TV