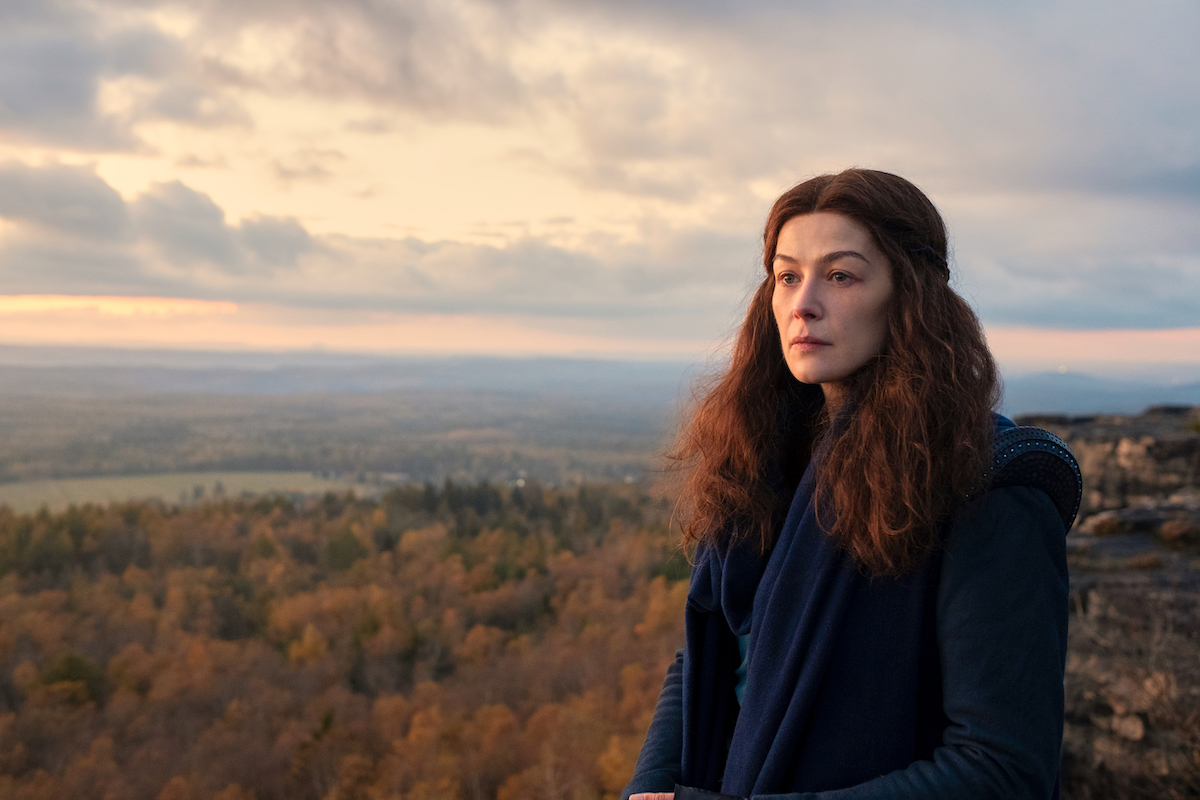 Robert Jordan’s The Wheel of Time series is quite rightly defined as massive. In fact, some have called it unadaptable. The story spans fourteen novels spread over two decades and was ultimately penned by two different authors (Jordan passed away in 2007 and fellow fantasy writer Brandon Sanderson was brought in to finish the series based on his notes.) It was also considered fairly groundbreaking in many ways, from its sprawling cast of major characters to its incorporation of the cyclical nature of creation most often seen in Eastern religions, its focus on balance and duality, and perhaps most importantly, its inclusion of multiple powerful, impactful women.

It’s hard to overemphasize how revolutionary the sheer act of simply including female characters in a fantasy story like this felt when the first book in this series was published in 1990. It’s true, not every woman in The Wheel of Time is particularly well-drawn or what modern readers might consider fleshed out, but in a publishing world that rarely bothered to include the most basic of token female characters, Jordan’s work stood out as a breath of fresh air—and enraptured a generation of fans.

“I think that one of the things that was so important about The Wheel of Time when it first came out was just the number of female characters that are in it,” Rafe Judkins, showrunner of Amazon’s upcoming television adaptation and self-professed “Robert Jordan nerd,” says. “You read Lord of the Rings and it’s just Eowyn. It’s only her, and I love female characters when I read, so for me to only have her to love in Lord of the Rings was always really hard for me.”

Judkins understood implicitly that his television adaptation would also have to adapt itself – to the changing landscape of fantasy fiction in the years since The Eye of the World hit shelves in 1990, to savvier audiences who expect more nuance from stories of this nature, to the expectations of viewers who fell in love with nuanced female characters like Daenerys Targaryen, Cersei Lannister, and Sansa Stark on HBO’s Game of Thrones.

“One of the things about the books is that they were probably quite, quite feminist in the ‘90s when they came out, and so I want to stay true to that and make them feel feminist for today,” Judkins says. “I think if we took some of the things that happened in the books and put them on screen today, they would not feel as feminist. There’s a 30-year gap between when those [first books] came out and the [series] end.”

According to Judkins, the Wheel of Time writers’ room spent a great deal of time considering how best to adapt the series’ female characters for the screen, and to appeal to the modern women who would be watching them.

“Our writing staff and our directorial staff and our producers, they’re all half or more than half women too, so just trying to make sure that we are delivering on the promise of the series from the 90s that it would be quite feminist,” he says.

Part of that promise is simply a numbers game. The Wheel of Time series is fairly remarkable in that it features many female characters with significant roles to play within the world of the story – and not simply as love interests for the series’ men. It features a female-centered magic system, multiple women in positions of political power, and a pervasive sense that their gender is clearly and obviously capable of much more than simply being wives and mothers.

“Coming to the Wheel of Time and just seeing all these different women who  – and I do think when you have a multiplicity of characters representing any group, much less burden falls on each of them – like each of them can be much more of who they really are,” Judkins says. “You just have so many different kinds of women represented on the show and different kinds of female power.”

One of the series’ most powerful women is Moiraine Damodred, a member of the female group of magic wielders known as the Aes Sedai, who channel the One Power in order to protect the world from the forces of darkness.

Oscar-nominated actress Rosamund Pike plays Moiraine, a character who, at first glance, seems a bit different from the roles she’s famous for, such as Gone Girl and A Private War. But, according to Pike, it is the complex nature of the Aes Sedai’s character that drew her to the role.

“Robert Jordan was very interesting in that he was able to write women with real mettle,” Pike says. “Women, who I’ve learned from the fandom who’ve written me letters, have inspired many men and I think that’s quite unusual.”

Pike, who describes her role as “delicious,” credits Moiraine’s “hidden reserves of depth” with the decades-long fascination with the character, as well as her apparently boundless determination to do the right thing for humanity.

“She’s a woman with a purpose,” Pike explains. “I think her commitment to her cause is almost – it has an almost religious zeal to it. It’s at the cost of everything else and that’s a sort of level of commitment that I really admire.”

Moiraine is hardly the only fascinating female character on The Wheel of Time’s canvas – now or in seasons to come. Pike enthusiastically points out that “there are so many amazing female characters coming” in the show’s second season, which has already been greenlit and is currently in production.

“I mean, Moraine is a great character,” Pike laughs. “But [in] our second season that we’re shooting now – there are many, many more fantastic, interesting, complex, mysterious, you know, all kinds of adjectives women, [who run the gamut] from innocence to experience.”

According to Judkins, the simple fact that powerful women are not seen as particularly surprising or unexpected within the world of the story is important.

“Women hold their power in very, very different ways in this world and on the show,” Judkins says. “Even [on a show like] Game of Thrones, the women were very often incredible and successful in spite of their gender. I don’t think that’s true in the world of The Wheel of Time. [Here], women are expected to be powerful and successful, so who she is as a person has a much bigger impact on her role.”

Updating the depiction of the series’ female characters isn’t the only change Judkins chose to make in his adaptation. His Wheel of Time series is also much more intentionally diverse than Jordan’s books, featuring multiple lead characters of color and essentially race-bending several characters who aren’t specifically identified as white in the books (but were likely assumed to be so by readers.)

“I think the books were kind of groundbreakingly diverse when they came out initially,” says actor Marcus Rutherford, who plays ​​Perrin Aybara, a young man from the small village of the Two Rivers and one of several ta’veren – or characters around whom the titular Wheel weaves its Pattern of destiny – in the story.

“But I think by making the show reflect the world we live in today, having a real diverse, global cast – it allows for really cool actors to come on board,” Rutherford says. “It’s something that’s kind of quite new and exciting but still very much holding [with] what Robert Jordan kind of wrote down.”

So much about this adaptation of The Wheel of Time is about acknowledging the important work that Jordan’s original series did within the fantasy space, while still pushing the genre forward in a way that resonates with modern audiences.

Judkins also hopes that his Wheel of Time will mark something of a sea change in the way we look at fantasy on television, a move away from the darker aspects of the genre to something that’s more aspirational.

“I think at its core, The Wheel of Time still has – it’s a world where hope exists and that’s not [necessarily] true in something like Game of Thrones,” Judkins says. “That feeling of hope gives it a very different feeling than some of the other stuff in fantasy right now that’s much more bleak.”

Fire Emblem Warriors Three Hopes Release Time: When Will the Game Be Playable?
Stranger Things Season 4: Could Vecna’s Victims Be Key to Defeating Him?
15 Difficult NES Games That Were Easier in Other Regions
The Boys Season 3: How That Imagine Video Came Together
Star Wars: Obi-Wan Kenobi Film Trilogy Shelved After Solo Problems