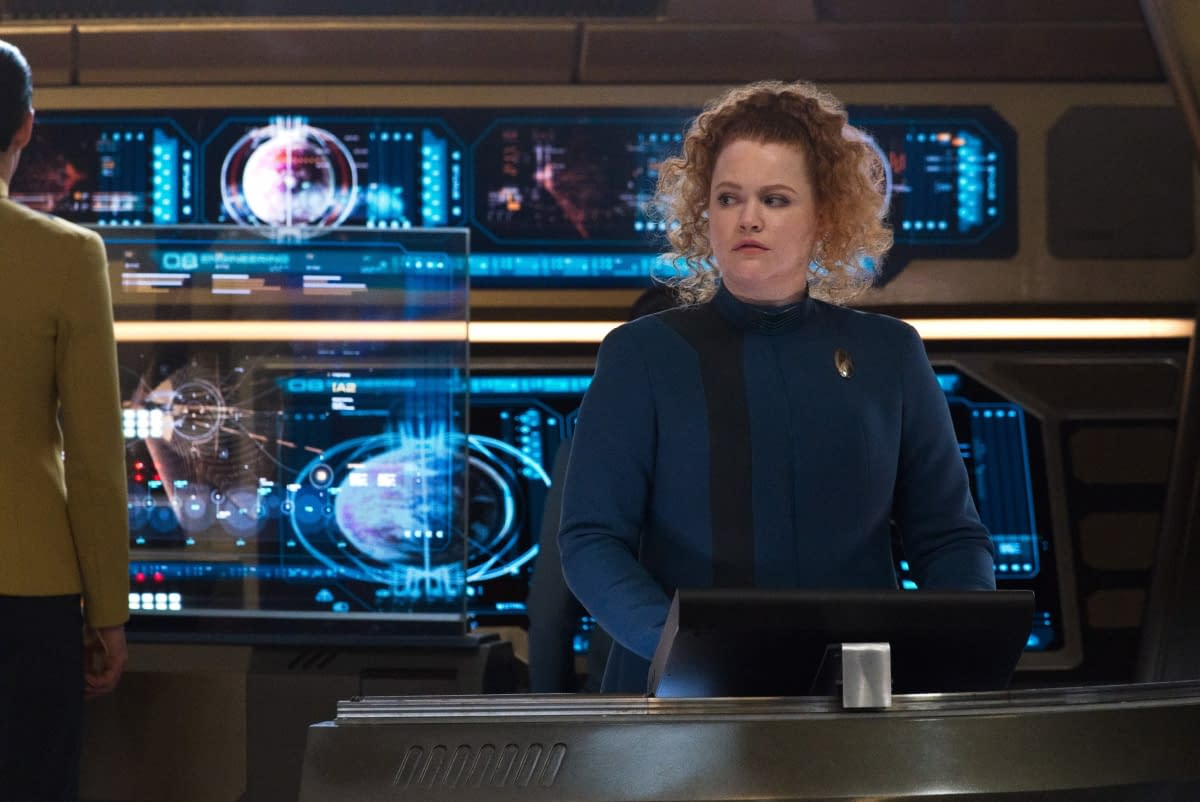 The crew of the USS Discovery might be firmly established in a century well beyond the rest of Star Trek canon, but that doesn’t mean the rich history of the Final Frontier isn’t always with them. In fact, even the title of the very first episode of Star Trek: Discovery, Season 4, is an Easter egg. “Kobayashi Maru,” references Star Trek II: The Wrath of Khan, and the famous no-win scenario first introduced in that film. The idea of a no-win scenario is a big deal for Captain Burnham in this first episode of Season 4. But, that very big thematic concept isnt’ the only Trekkie call back in the debut episode of DISCO’s latest season.

From shout-outs to Captain Archer from Enterprise, to the tech that makes transporters beam you up, here every Easter egg and reference we caught in Discovery Season 4, Episode 1, “Kobayashi Maru.”

While describing Grudge’s species at the beginning of the episode, Burnham seems to vaguely reference another famous Star Trek cat, Spot, from The Next Generation. In his famous poem “Ode to Spot,” Data’s first words were: “Felis Catus is your taxonomic nomenclature.”

Though the details are different, the overall tone and sweep of the first scene in this episode feels very reminiscent of Star Trek Into Darkness. In that film, Bones and Kirk were running for their lives while a group of friendly aliens was chasing them for perceived religious heresy. In this episode, the “butterfly people”— as Book calls them — are similarly annoyed, also because of a miscommunication.

Bringing your pet ruins another away mission — Captain Archer style

The fact that the simple presence of a pet can cause an alien species to get profoundly offended also seems to reference the Star Trek: Enterprise episode “One Night In Sickbay,” in which Captain Archer accidentally offends an entire alien species because his dog Porthos pees on some trees.

Although the opening credits for the show are very familiar by now, there are a few small details changed for this season. As of now, the USS Discovery in the credits appears as its upgraded-self, complete with detached naccells. The anomaly is also referenced in the credits, as is a mysterious glyph, which could represent some kind of mathematical equation.

When we visit the Kaminar high council, we see several Ba’ul chilling in the water outside of a dome. The Ba’ul are the other dominant lifeform on the planet Kaminar, in addition to Saru’s species, the Kelpiens. We actually haven’t seen the Ba’ul since Season 2, when it was revealed in the episode “A Sound of Thunder,” that in eons in the past, the Kelpiens had enslaved the Ba’ul, a situation which was reversed by the 23rd century. Now, it seems they all are living in harmony, a 930 year legacy which was arguably started by Captain Pike and Burnham in Season 2.

New uniforms and the passage of time

Although no comment is made about the new color-coded uniforms worn by the crew of the Discovery, Saru tells us five months have passed since the end of Season 3. Apparently, at that time, Starfleet decided to roll out some new uniforms, at least, for the DISCO crew. Personal at Starfleet command, and later, Commander Nalas, all wear the mostly grey uniforms from last season.

Because Starfleet is no longer based on Earth, we find out here that the academy itself has actually been shut down since after the Burn.

As Book and Burnham walk down the corridor, we see what appears to be — and sounds like — a very large tribble. This isn’t the first time tribbles have appeared in Discovery. Lorca had a tribble in Season 1, and in Season 2, a tribble sound effect was used as a special code during a transmission between Burnham and Ash Tyler.

As played by Chelah Horsdal, President Rillak is the first new president of the United Fedaration of Planets we’ve seen in quite some time. Rillak has a mixed heritage of being both Bajorian and Cardassian. And, an Easter egg last season established that the Cardassians joined the Federation sometime before the Burn.

Just before Discovery jumps into Federation HQ, we see the USS Voyager-J, which was first introduced in Discovery Season 3, in the episode “Die Trying.”

When President Rillak reveals the new “Archer Space Dock,” we clearly hear the theme from Star Trek: Enterprise — “Archer’s Theme” — composed by Denis McCarthy. This is the theme that played over the end credits of most episodes of Enterprise, and in some ways, was the other main theme of that series, beyond “Faith of the Heart.”

The space dock itself bears a striking resemblance to the basic shape of the space dock from Star Trek: The Motion Picture. It’s even got those distinctive honeycomb lights! Rillak also says that “the next generation of Starfleet vessels will be constructed” in in this space dock, which feels like a reference to The Next Generation.

Tilly jokes that being a cadet “feels like 1,000 years ago and yesterday — which it was, simultaneously.” This references the fact that Discovery jumped from 2258 to 3188 at the end of Season 2. In Season 1, set mostly in 2257, Tilly was still a cadet. So, it’s been 930 years, but also, because of time travel, like a year.

When Nalas mentions his space station is “squiddled” Burnham later tells Detmer that this is an “Akoszonam expression.” Previously, Nalas’ species wasn’t actually established on screen, but he appears to be the same species as Kima from the Short Treks episode “Children of Mars,” which served as the prologue to Star Trek: Picard Season 1.This means that Kima and Nalas are both, retroactively, members of the Akoszonam, species. Probably.

While trying to rescue everyone from the doomed space station, Stamets mentions there’s something wrong with the Heisenberg compensator. This may sound like random DISCO space jargon, but, the Heisenberg compensator is an Easter egg from The Next Generation. It’s mentioned as an essential part of the transporter in “Realm of Fear,” and again in “Ship in a Bottle.” Shocking no one, O’Brien talks about it a lot in Deep Space Nine, too.

Stamets appears to be the chief engineer of Discovery

While the “regular” main engineering of Discovery is still a little murky (it has a warp drive, too, folks) we do see Stamets seemingly in charge of all of engineering. Is he actually the chief engineer now? Where’s Reno!?

Burnham asks Detmer and Owo: “How long will it take our Dots to remove that debris?” This references the Dot-23 robots on Discovery, which replaced the Dot-7s that Disco and the Enterprise had in Season 2. On the USS Discovery, the Dots are seemingly imbued with the self-aware consciousness of the ship itself, whic, in the future — as seen in the Short Treks episode “Calypso” — may be known by the name “Zora.”

Burnham pilots a craft called a “Worker bee” in this episode, which appears to be a souped-up 32nd Century version of a deep-cut  Star Trek craft. Worker bees have actually been around since the era of The Motion Picture. They’re essential maintenance craft that allow Starfleet crew to perform complicated construction tasks in space. Although never actually named outright on screen, reference books like Mr. Scott’s Guide to the Enteprise (1989) and various ‘90s comics, depicted all sorts of different versions of Worker bee shuttlecraft in both the 23rd and 24th centuries. Discovery has been using worker bees since Season 1 and Ash Tyler even flew one to retrieve data about the Mirror Universe.

In addition to mentioning a “next generation spore drive,” President  Rillak also talks about a “Pathway” drive prototype, which will be installed on “Voyager for testing.” This feels like a reference to the “Pathfinder” project in Voyager, headed by Reginald Barclay, and designed to bring Voyager home.

Needs of the many

Rillak accuses Captain Burnham of being reckless saying, “you were prepared to sacrifice the many to save the few.” This references the Vulcan axiom of “the needs of the many outweigh the needs of the few,” also introduced in The Wrath of Khan. Rillak suggests that Burnham might have gained a “pyrrhic victory,” had she lost more lives than she saved. Considering that Rillak is not human, this is a pretty impressive linguistic reference. A “pyrrhic victory,” references an ancient King named Pyrrhus who was able to take out a Roman Army, but lost most of his amry in the process.

It’s unclear if Rillak is throwing around fancy words to rile Burnham up, or if she’s got another motive all together. Either way, unlike any Star Trek captain before, Burnham has a Space President breathing down her neck, seemingly at all times. What is this, Battlestar Galactica?