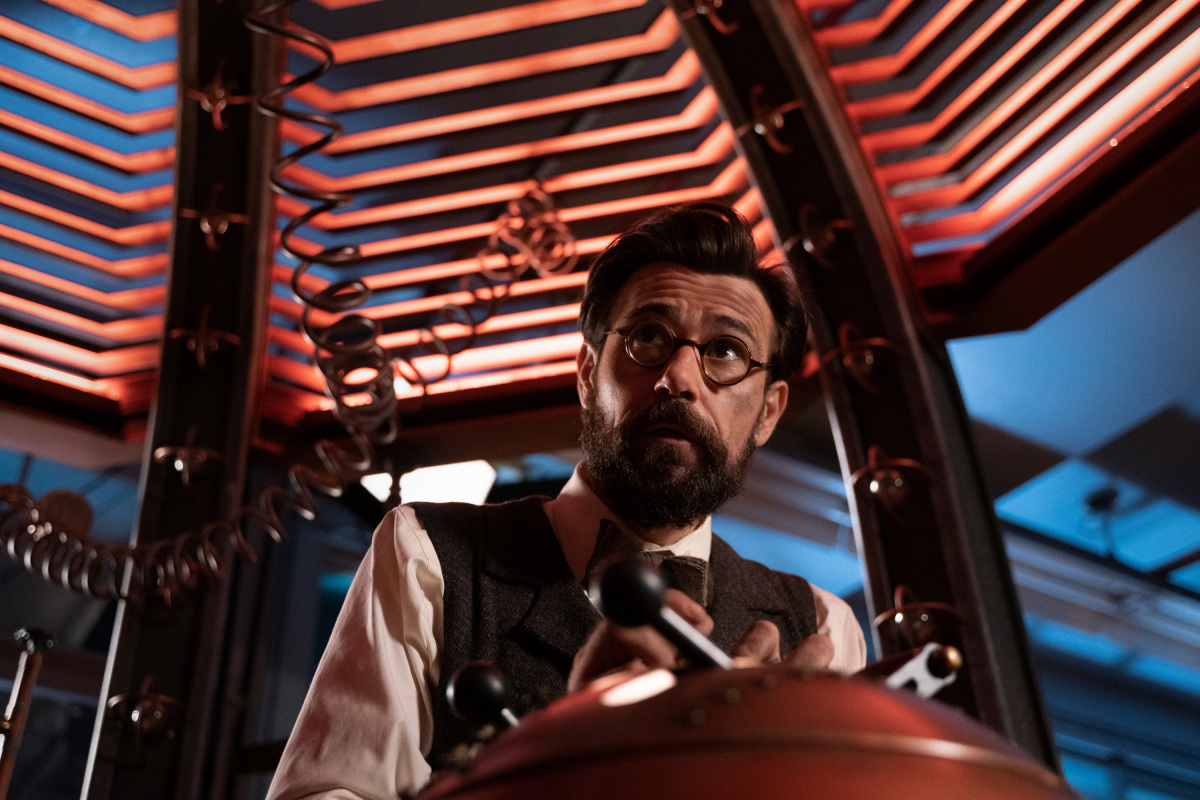 I don’t know that any DC show has ever had the kind of run that Legends of Tomorrow is on. We’ve reached the midseason finale, at about the midpoint of an odd season – going by COVID-adjusted production and air schedules, this feels more like a season 6.5, even if season 7 has its own distinct identity and vibe. But at this point in the season, it’s incredible that not only have we not had a bad episode, we haven’t even had a mediocre one.

The past month of Legends episodes have been among the strongest this show has ever put on, bookended by the perfect 100th episode and now the best midseason finale this show has ever aired. And it’s all because of the amazing chemistry the cast has.

There are two moments that really stand out. “A Woman’s Place is in the War Effort” takes the Legends to an American aerospace factory during World War II. The men are all off fighting the war, so the factory is trying to meet its production schedule by hiring a ton of women, but the factory floor is segregated by a giant asshole of a boss, setting up a payoff to Astra’s season long bubbling rage at early century racism. The women of the Legends go to work at the factory as an excuse to steal materials to repair their time machine (busted by Bishop’s toilet meteor) and get home. InstaZari is the only one to stay behind in the House of Secrets, changing places with her counterpart in the totem and working with Behrad to teach Nate Persian customs (by using Bishop to demonstrate hospitality) so Nate will fit in better in the totem.

The first moment that clicks is when everyone comes back to the House for dinner and sees Bishop roaming freely. Sara gets mad until Behrad explains what they’re up to. She waves a finger in his face and tells him “you’re lucky I love you guys,” and the joy radiating from the show was palpable. This cast so obviously enjoys each other that you can’t help but feel it. Every interaction feels effortless and true. That moment felt so much like the pinnacle of this show’s potential – it’s Parks & Recreation with superheroes, a show about nice people who like each other being nice to each other, with chemistry that leaps off the screen.

And speaking of chemistry, Behrad and Astra were electric. I couldn’t take notes during their scene later in the episode. Astra freezes the factory boss in a moment of rage at his bigotry, and she and Gideon use his “approved” stamp to imitate him. In true Legends fashion, they immediately hand power to the workers, dropping a suggestion box on the middle of the shop floor and then approving basically every suggestion that comes across the desk. That includes integrating the factory, which leads to the only blemish on the episode (more on that in a second), and forces the much smaller integrated staff to hustle to get their plane built in time.

Behrad, frustrated that Bishop is taking advantage of him, brings lunch to Astra in the office and they each share their stress and immediately become the most magnetic straight couple this show has ever shipped. She knows exactly who he is and explains him perfectly, and he knows exactly what she needs to hear and gives it to her, and their long look at each other at the end of that scene tells me the cast and crew know exactly how good they are together. I can’t wait for this show to come back so we can get more from them.

The show’s lone disappointing scene was the argument about progress between Astra and the janitorial supervisor about the pace of progress. The supervisor argues for “slow, sustainable” change, pushing back against Astra integrating the shop, while Astra pushes back saying “when someone stabs a knife nine inches into your back, pulling it out six inches isn’t progress.” That’s a terrific metaphor, but a heady topic for this show to tackle in so little time, especially when we’re living in the opening act of what William Gibson called “The Jackpot” – the moment in human history when all our systems simultaneously degraded to the point of collapse. Arguing about the pace of change is kind of moot.

That said, the show just kind of jumps past it. Integrating the factory is enough of a change to trigger Evil Gideon to send in a squad to take them down. The Legends get away with the help of Bishop, who sacrifices himself to buy them time to get away. And we find out at the very end that the squad attacking the Legends is actually a crew of alternate Legends.

This was a fun twist at the end of an excellent episode, which capped the strongest half-season Legends of Tomorrow has ever had. I hope the break doesn’t kill the show’s momentum, because we’re in the middle of something really special here.