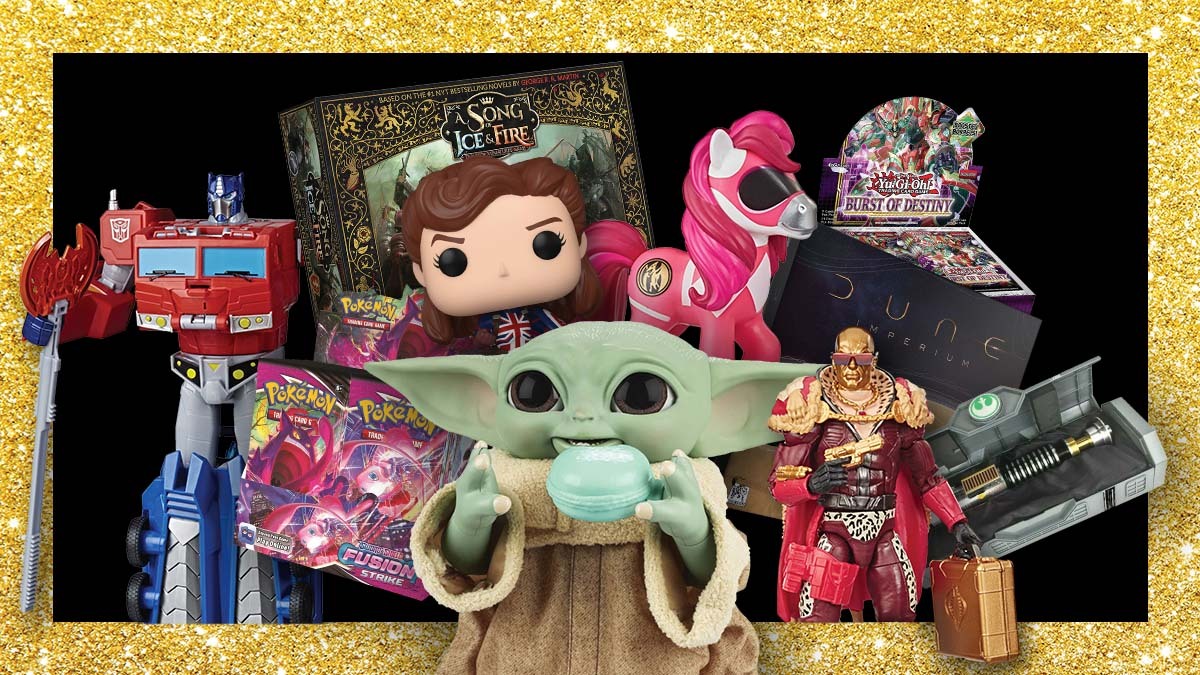 This article is part of our Collector’s Digest series powered by:

There’s no need to be stressed about gift-giving this year, as Den of Geek has partnered with eBay to present this terrific gift guide that covers all aspects of fandom. From collectible card games to toys to comics and beyond, consider this an overview of the greatest gifts to give (and get) this year.

The latest set in the Pokémon TCG line is Fusion Strike, and it’s shaping up to be one of the most in-demand entries in the card phenomenon ever–in other words, now more than ever, you gotta catch ‘em all!

Now, um, bursting on the scene is the newest expansion to the unstoppable Yu-Gi-Oh! Official Card Game complete with an abundance of rare, must-have cards.

The much buzzed about Nightfall expansion of the MetaZoo TCG is here, bringing with it creatures that will send your imagination soaring!

Double Diamond is the newest Digimon TCG booster series, one that promises the debut of several fan favorite characters that will increase this line’s impressive collectibility.

It’s been 40 years since Pac-Man first munched his way into our hearts, and this incredible (and collectible) coin is an ideal way to celebrate this milestone anniversary!

The spice may be life, but these 1 oz. silver Dune coins available in House Atreides or House Harkonnen variants and packed in a collectible tin gift box are pretty darn sweet too.

Marvel’s What If…? Funko POP!s

Marvel’s What If…? is the animation sensation of the year, so it makes sense that the Funko POP!s based on the show, including Captain Carter, T’Challa Star Lord, and many other characters from the series, are equally cool.

Buy Marvel’s What If…? Funko POP!s

The magic of Disney combines with the artistry of “Painter of Light” Thomas Kinkade with your choice of eight 8×10 Mickey and Minnie Gallery Wraps depicting the characters in a variety of joyous surroundings.

There’s no more compelling character in comics today than Miles Morales, and it started back in August of 2011 when he made his debut in this issue of Ultimate Fallout from writer Brian Michael Bendis and artist Sarah Pichelli.

Comics underwent a seismic shift after this issue of The Incredible Hulk introduced Wolverine and changed the industry forever, ‘nuff said?

Asmodee’s frontier favorite returns with a second edition packed with cattle ranching action as you attempt to get your herd to Kansas City safely.

Return to a galaxy far, far away with this miniature-packed tabletop game that has Jedi Knights and Clone Troopers fighting against Separtist forces.

The original Star Wars trilogy is the backdrop for this exciting infantry-based miniatures battle game in which the Rebel Alliance squares off against the Empire.

Promising “skirmish combat in the 41st Millennium,” this entry in the Warhammer saga has incredible scenery and exciting gameplay that will captivate veteran players and newbies alike.

With 60 new Citadel miniatures and an exciting Warhammer environment to explore, /Age of Sigmar: Dominion/ is shaping up to be a must-have tabletop experience this holiday season.

Prepare for intense battle and inspiring heroism with an assortment of new Warhammer miniatures that you can build and paint before utilizing them in your next campaign.

Descent: Legends of the Dark

Featuring heroic and monstrous miniatures, Asmodee’s Descent: Legends of the Dark is a fantasy tabletop game that is generating huge buzz.

Buy Descent: Legends of the Dark

By drawing inspiration from both Frank Herbert’s seminal sci-fi novel as well as Denis Villeneuve’s acclaimed film adaptation, this card-driven game thrusts you into the intrigue and danger-packed universe of Dune.

Lost Ruins of Arnak Board Game

Czech Games’ Lost Ruins of Arnak transports players to a strange island where a thriving civilization once existed…and one whose mysteries result in a unique gaming experience.