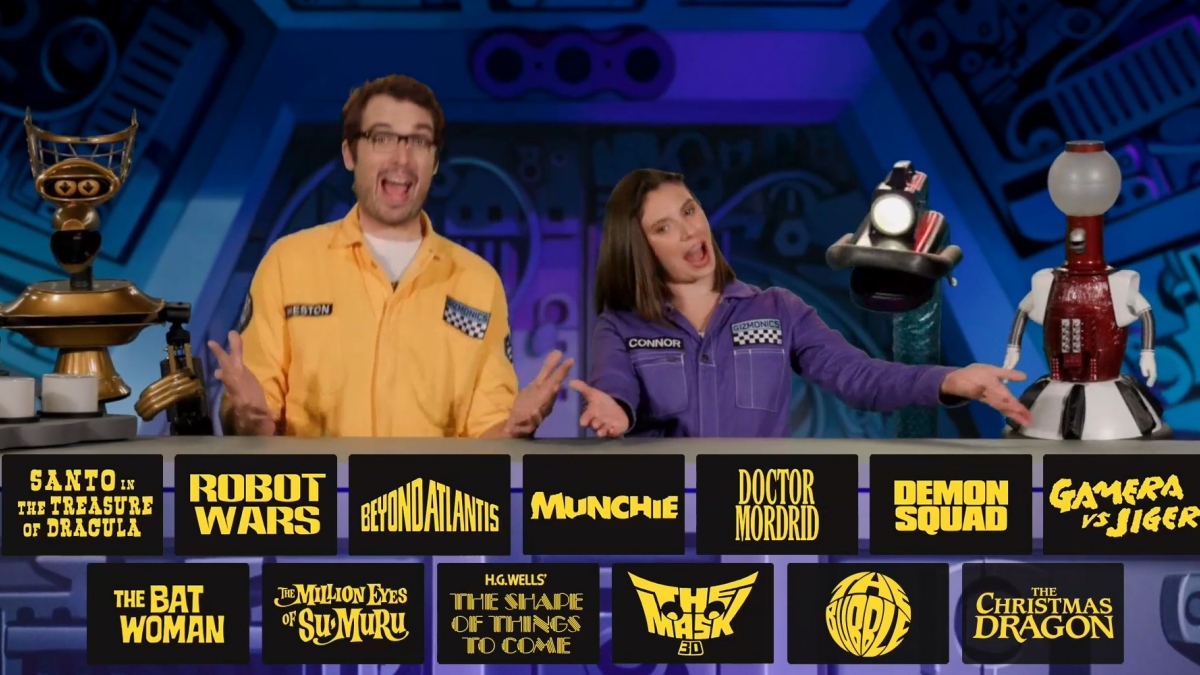 Mystery Science Theater 3000’s Turkey Day isn’t just an annual marathon of classic episodes to sit back and watch on Thanksgiving. Depending on the timing, fans watch it hoping to see some kind of news. In this era when MST3K’s always in flux, viewers have their fingers crossed that we’re going to see some kind of look into the future of the franchise. Luckily, Turkey Day 2021 gave us plenty to sink our teeth into.

To get us back up to speed, after years of being off TV, a Kickstarter campaign started up in 2015 and successfully brought MST3K back for an eleventh season on Netflix for 2017. It ran for fourteen episodes and while the new cast needed some time to figure themselves out, it had plenty of high notes. Then things seemed to wither before it had a chance to soar.

The twelfth season hit in 2018 with a mere six episodes, each cut shorter than your usual MST3K episode. Netflix quietly cancelled the show, with part of the agreement being that creator Joel Hodgson had to wait at least three years before finding a new home for the show. A series of live tours helped keep the brand active, but COVID threw a bit of a wrench into that.

Thankfully, another successful Kickstarter will bring us another season and a new home for the show. This time, we’re getting thirteen episodes on Gizmoplex, an upcoming streaming service for checking out MST3K stuff with a little RiffTrax material thrown in for good measure. While some episodes will feature Jonah Heston (Jonah Ray) with his versions of Crow and Tom Servo (Hampton Yount and Baron Vaughn), other episodes will feature the live tour’s Emily Connor (Emily Marsh) and her versions of Crow and Tom Servo (Nate Begle and Conor McGiffin).

What Movies Will be on MST3K Season 13?

MST3K has been sadly light on luchador superhero movies. We hadn’t seen any of these babies since TV’s Frank left back in the sixth season with Samson and the Vampire Women. Much like that classic, this stars legendary Mexican wrestler El Santo as himself, albeit a more fantastic version. Like in the sense that he had built a time machine that allows people to experience past lives. The woman who he uses for this experiment is the reincarnation of one of Dracula’s victims and this leads to the luchador and the King of Vampires throwing down.

Advertised as a thematic sequel to Robot Jox, Robot Wars brings a similar style of post-apocalyptic robot-fighting action. This Full Moon Entertainment release features giant robots battling it out with stop motion that somehow makes it look incredibly rad and incredibly cheesy at the same time. At least it looks better than whatever was going on in Atlantic Rim.

In what was supposed to be a pure exploitation film until the studio decided to make it more family-friendly in hopes of a wider audience (ie. have the women wear tops), Beyond Atlantis has a pretty simple setup. A group of adventurers, including one played by Sid Haig, are out to rob an island of some hidden treasure. They bite off more than they can chew once they discover that the natives are half-fish! And not in the usual mermaid way, but in the sense that they all have weird piranha eyes. It’s creepy.

Munchie is actually the second part of a trilogy, sandwiched in-between Munchies and Munchie Strikes Back. Born out of the attempts to capitalize on the success of Gremlins, we somehow end up with this terrible family comedy starring a greaser rodent puppet with the voice of Dom DeLuise. Munchie tries to use his magic powers to help a loser kid get revenge on his bullies and catch the attention of a very young Jennifer Love Hewitt in her film debut.

Months back, I interviewed Joel Hodgson and he mentioned how season 13 will feature the “new Manos.” I have to imagine he’s talking about Munchie. Word from those who wrote the episode is that it nearly broke them.

We have another Full Moon release and this one is sort of awesome on its own. Granted, the MST3K treatment is welcome, but you can totally watch this on your own and enjoy it. As the story goes, Full Moon was going to make a Doctor Strange movie, but due to some complications, they lost the license. Hence, B-movie royalty Jeffrey Combs plays Dr. Anton Mordrid, the ORIGINAL CHARACTER DO NOT STEAL of the Mystic Arts.

Once again, the record for most recent movie on an episode of MST3K is broken. Demon Squad is about a “paranormal investigator” who is trying to solve a crime while dealing with all sorts of otherworldly folk. It sort of comes off as an inexperienced filmmaker’s attempt to make a noir mystery with the cast of Nightbreed and a ten dollar budget. It looks rough, but seems to have some heart in its attempt.

Back in the Joel era, MST3K cut through the original Gamera movies like a knife through butter. A couple of the movies never got the treatment, so here we are. As Japan puts together Expo ’70, they accidentally unleash a new kaiju threat in Jiger. Gamera not only gets his ass kicked by the beast, but he’s also infected by Jiger’s offspring. The only thing that can save the world now is the children and their love for Gamera. That’s usually how these things work.

What happens when you take an El Santo movie and replace him with a woman who just bought a Sexy Adam West Halloween costume at Party City? This very, very unauthorized mess from Italy. The Batwoman (no, not that one) is a scantily-clad professional wrestler who lives the high life and has to stop a mad scientist and his ridiculous lobster monster from taking over the world. Said mad scientist owns a boat called “Reptilicus,” so I’m looking forward to the callback jokes there.

Ah, so this is interesting. The Million Eyes of Sumuru has not only been featured on RiffTrax (along with its sequel The Girl From Rio), but it was also part of the KTMA-TV “season 0” of MST3K. The movie deals with Sumuru, a terrorist leader of a sect of ass-kicking supermodel assassins. Their plan is to have women conquer the world, a plot that can only be stopped by one Frankie Avalon. I can’t believe it took them thirty years before revisiting this gem.

Despite its title, this movie has very, very, VERY little to do with the book of the same name. Instead, it’s Jack Palance starring in a movie trying to capitalize on the success of Star Wars, only succeeding in giving us a sci-fi mess. There is some effort mixed in there, but the whole thing is just a dreadful attempt to ape a popular brand. At least the robots are sort of cool, if clunky.

No, it’s not about the wacky green vigilante or the ugly redhead. Instead, The Mask 3D is about a psychiatrist who tries on a mystical tribal mask and trips out on it. He becomes addicted to wearing it and his surreal visions, even though it turns him into a violent psychopath. Huh, maybe it’s not too far from the comic character after all. Anyway, this will be the first Halloween-based episode of MST3K and the only black-and-white entry for this season.

Feeling like a full-length Twilight Zone episode, a married couple’s vacation goes awry when they end up in a village full of people acting strangely. Soon they realize that not only is there a glass dome around the village, but aliens appear to have taken over. Yeah, that twist is a lot more obvious in the retitled version called Fantastic Invasion of Planet Earth. Though that version of the movie is nearly two hours long, so maybe it’s better that we just get The Bubble instead.

Father Christmas is dying because something something magic and the only ones who can save him and save Christmas itself are a ragtag team of medieval orphans and their newly-discovered pet dragon. Like many pieces of modern crap you’d see riffed, this movie uses a LOT of digital effects, high quality masks, and an excessive amount of scenes shot in the forest. Apparently, this episode will feature Jonah, Emily, AND Joel riffing together.

As revealed at the very end of the 12 hour+ Turkey Day marathon, MST3K’s thirteenth season will begin on March 4, 2022. Considering the last episode announced is a Christmas-themed one, it’s likely that all thirteen episodes will pop up over the course of 2022, but Joel has let it be known that they aren’t doing one big binge-ready dump. The episodes will arrive when they’re ready.

In addition to the thirteen episodes, there will also be monthly live events on Gizmoplex. No real details on what those will entail. We’ll also get twelve shorts! Man, I missed those.

Check out some quick trailers for each movie as well as information on Gizmoplex here.

The Flash: The Eternal Appeal of Eobard Thawne
Inside DC’s Legends of Tomorrow
Shadowhunters Season 3 Episode 12 “Original Sin” | AfterBuzz TV
Evil Season 3 Gives in to a Sex Demon
Will the Obi-Wan Kenobi Finale Bring Back Qui-Gon Jinn as a Force Ghost?