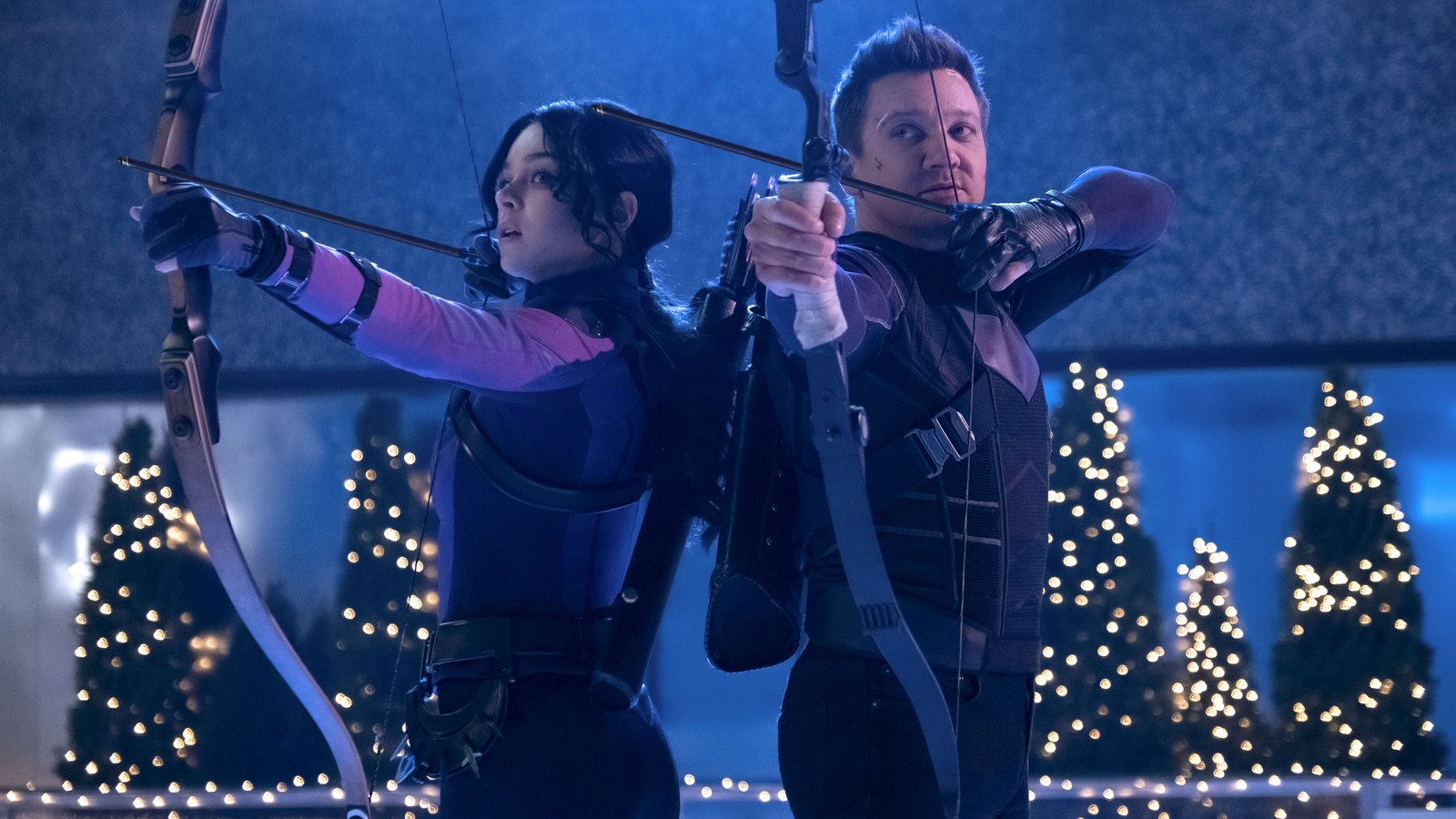 One of the first things you notice when watching the new Marvel series Hawkeye is the time and place in which it is set.

The show is located in New York City, and the time is some point after the events of Avengers: Endgame and Spider-Man: Far from Home — meaning it’s taking place at the end of either 2024 or 2025, since the former took place in 2023 and the latter in the summer of 2024. And yes, we said “the end” of whichever year it’s in, because as one can glean pretty quickly, Hawkeye takes place just a few days (six, to be exact) before Christmas.

Yes, for the first time since 2013 — when Iron Man 3 was the first and, to date, last entry to take place during this part of the year — a Marvel Cinematic Universe story is set at Christmas time.

Visiting the Big Apple with his kids for a little pre-holiday sightseeing, a semi-retired Hawkeye/Clint Barton (Jeremy Renner) quickly sends his clan home as he teams up with a new hero named Kate Bishop (Hailee Steinfeld) and uncovers a criminal conspiracy involving the remnants of the Avengers. Barton has just a few days to figure it all out and get back home in time himself to join his family for Christmas.

“I think the holiday predated me,” says director Rhys Thomas at a press conference when asked about the Yuletide setting. “But, yeah, I mean, I’ll take the Die Hard feel…I think the story of a character like Clint just trying to live his life and trouble coming to find him, it’s a trope that we all love and enjoy.  And setting it at Christmastime, that clash of family time with business time, is a classic combo.”

Thomas admits that he has to “hand it to” Marvel Studios chief creative officer Kevin Feige for the initial idea, with Feige saying, “This is fun because it’s a Christmas story taking place during the holidays, and it also is based on early discussions about a limited time period — about setting a series in not quite real time, but essentially a six-day period.  Six episodes, six days.”

Feige adds that the question of “Will Clint make it home for Christmas?” proved to be somewhat of a palate cleanser for the Marvel team after the vaster objectives of tales like Endgame, Loki and Eternals. “(This) was fun and a breath of fresh air after world-ending stakes and Celestials bursting out of planets and multiverse shenanigans. This is, like Hawkeye himself, a grounded, family based show.”

Even though it’s been eight years between Iron Man 3 and Hawkeye, this isn’t the last MCU joint we’ll see taking place during the most festive time of the year either. The Guardians of the Galaxy Holiday Special is slated to come out about a year from now, for Christmas 2022, and Feige notes that movies and TV special set during the holidays are part of a long tradition that includes classic fare like Batman Returns and the annual Doctor Who specials.

“I’ve always loved films or shows or specials that take place over the holiday season,” says Feige. “I think there’s a heightened amount of emotion and a heightened amount of conflict and tension that can occur in this glorious season. Honestly, we’ve always been looking for opportunities…The Guardians of the Galaxy Holiday Special has literally been in the works for four years.”

With all kinds of multiverse hell expected to break loose in the MCU in movies like Spider-Man: No Way Home, Doctor Strange in the Multiverse of Madness and Ant-Man and the Wasp: Quantumania, this might be the last relatively peaceful Christmas that any Marvel hero has for a while…so here’s hoping Hawkeye makes it home in time to enjoy his.

Hawkeye is streaming now on Disney+, with new episodes premiering on Wednesdays.

Link Tank: When Marvel’s Secret Invasion Could Be Set on the MCU Timeline
Bad Buddy and the Subversive Sentimentality of BL Storytelling
Wakanda Forever: What Does The Future Hold For Black Panther 2?
Munich: Netflix WW2 Movie Holds Mirror Up to Today
Everything You Need To Know About The Activision Blizzard Scandal