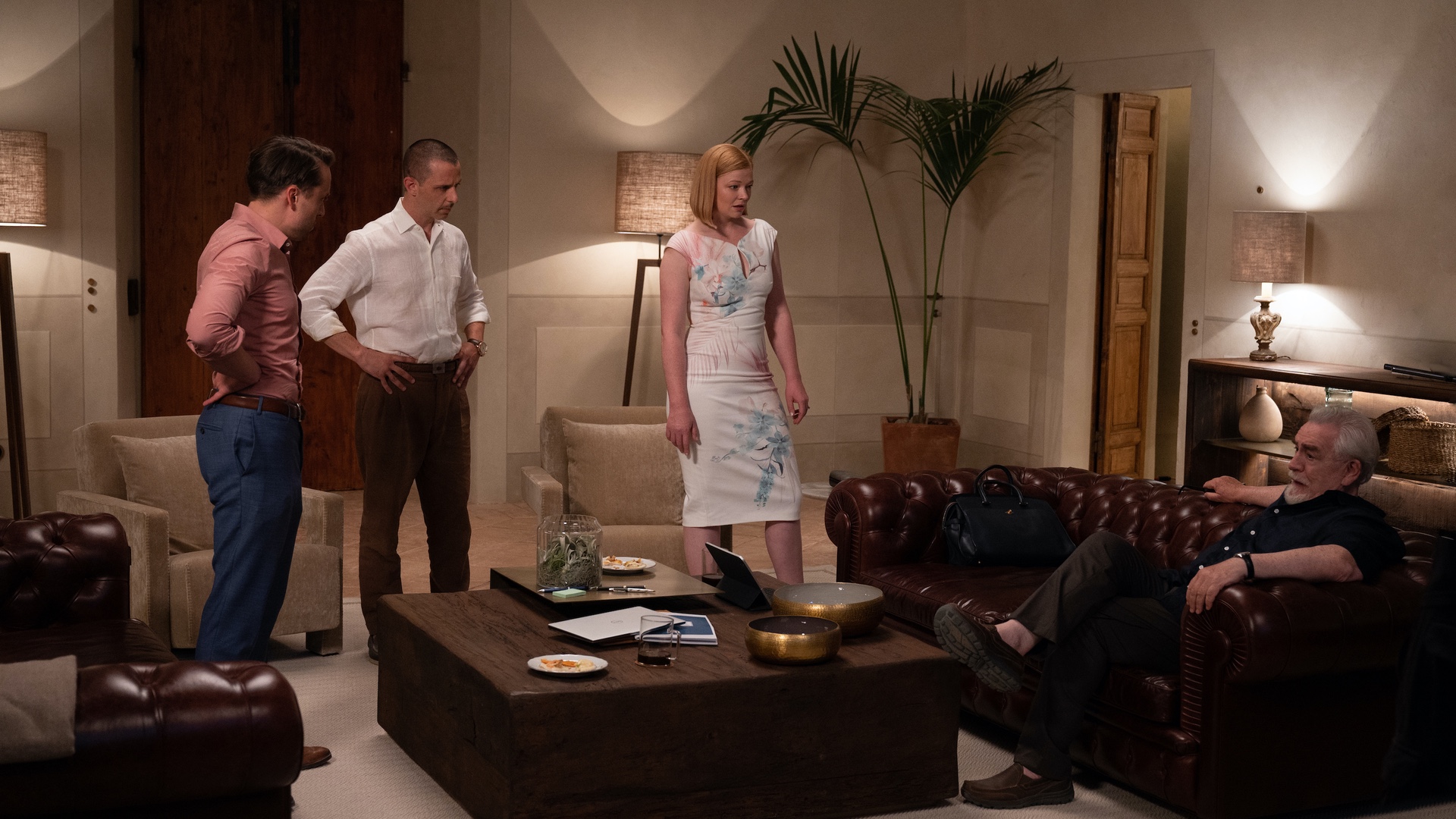 Here’s the thing about the Succession season 3 finale: everything is going to work out fine for the Roy siblings.

Despite the sale to GoJo ending any chance of their inheriting Waystar Royco, Kendall, Shiv, and Roman Roy aren’t going to be financially destitute any time soon. The trio has been obscenely rich for so long and that is almost functionally impossible for them to ever not be rich anymore. Through their previous jobs at Waystar, allowances, and various investments, each of the Roy children are certainly still multi-millionaires, if not billionaires. Like the Murdoch family children they’re based on, the Roys will always be rich and always be welcome in Illuminati-level high society. Nothing actually bad happens to the Roys in the brilliant “All the Bells Say”. Kendall recovers from a likely suicide attempt in the penultimate episode almost immediately. Nobody else is physically injured, maimed, or killed. Everything is OK.

And yet…the Succession season 3 finale is still somehow among the most devastating hours of television this year – or maybe ever. Fans on social media have taken to calling the events of the finale the show’s “Red Wedding,” and it doesn’t feel like hyperbole. The emotional devastation brought down upon Kendall (Jeremy Strong), Shiv (Sarah Snook), and Roman (Kieran Culkin) from their parents is every bit as brutal as the violent eradication of King Robb Stark’s mother, wife, unborn child, army, and any chance of ever avenging his father’s death. How Succession makes the two events feel even remotely similar is a miracle of storytelling and a reminder of the inherent power that good drama holds over us all.

Throughout its opulent three seasons on HBO, Succession has often been compared to the works of Shakespeare. Like the bard’s best dramas, Succession is a larger-than-life dynastic struggle that is frequently as humorously crass as it is tragic. Never have those Shakespeare comparisons felt more apt than in season 3’s final episode, however. It’s in this installment that Succession reminds us just how scarily wealthy and powerful these people are. Like the actual royalty in Hamlet, Macbeth, King Lear, or pretty much any other Shakespearean tragedy, the Roys truly know the slings and arrows of outrageous fortune.

For the second episode in a row, Succession puts HBO’s money to good use by filming on location in beautiful Tuscany. The Roy kids begin the hour by playing Monopoly and being disgustingly, inhumanly rich. Roman congratulates his brother-in-law Tom Wambsgans (Matthew Macfadyen) for improving ratings on their news channel ATN by turning up the “bigot spigot.” After the game, Roman asks his siblings “How was the Monopoly? Did you pay some income tax for the novelty value?” Later when Kendall finally breaks down and confesses to accidentally killing a waiter at Shiv’s wedding, Roman and Shiv are supportive of their brother to the point that they’re downright dismissive over the loss of a human life.

This episode is filled with example after example of the Roy family’s malevolent influence on the world around them. They are terrible as a collective and they are each terrible in their own individual ways. And even if they weren’t terrible, their mere existence as outsized consumers of the global GDP pie would be fundamentally evil. Succession never hides from that reality. In fact, it leans into it with scenes like those described above. Despite all that, however, it’s nearly impossible not to empathize with the Roy kids throughout all of this finale.

We’re an empathetic species. We feel bad for those in pain and we simply can’t help it. The ability of Succession’s writers and performers to exploit that empathy is truly remarkable. Look at this instantly iconic shot from the episode below for example.

No one should feel bad for these people. They are all stakeholders in a parasitic media conglomerate that is tearing Western democracy apart. Kendall literally killed someone. But in this moment it’s so hard to remember any of that. When Roman puts his hands on his older brother’s shoulders, Kendall reacts like bolts of lightning are shooting through his body. He gasps and devolves into sobs, shocked at the first real expression of familial support that he’s felt in years. You all but forget that a few episodes ago, the Roys chose an outright white supremacist to be their preferred presidential candidate.

The reason why the Succession season 3 finale is able to make a relatively minor speed bump feel like an outright execution comes down to the acting. In the week leading up to the finale, a New Yorker article profiling Jeremy Strong’s atypical and intense acting techniques went modestly viral. It was fodder for some jokes and became a thing when The Celebs ™ annoyingly got ahold of it and decided to defend one of their own from nonexistent attacks. That moment in the Tuscan dirt, however, more that justifies whatever methodology Strong needs to do to get in character and stay there.

Every other actor puts in some transcendent work as well. The final 10 minutes or so are an absolute tour de force from Culkin. Roman barely moves during the final confrontation with his father, only lifting his hand to hide his face from his wrath periodically. But his expressions are that of someone being beaten to within an inch of their life by a professional boxer. When the final betrayal goes down, Roman lets out something like a sob before falling to the ground and groveling on the floor in front of his surrogate mommy/surrogate girlfriend/surrogate everything Gerri.

Meanwhile Shiv looks like she is fully prepared to set the room on fire with her rage. She assures Tom that everything is ok because it has to be. But then falls into such an apocalyptic sourpuss upon being embraced by Tom that the episode has no choice but to close on the image. Even Tom gets in on the action earlier, sharing a scene with Cousin Greg (Nicholas Braun) that is almost unbearably tender. Pop culture has previously had some fun with intensely homoerotic pairings between seemingly heterosexual men before, but Greg and Tom’s relationship makes them all seem silly by comparison. These people live big lives. And Tom well and truly wants to be Nero, paired up with his tall, beautiful Sporus. It’s equal parts grotesque and beautiful. It all works because the actors make it work.

Then there’s Brian Cox. Plenty of children have complicated relationships with their father. In this hour, however, Cox’s Logan is more Thanos with an Infinity Gauntlet than Rupert Murdoch. Logan has defeated his children before they’ve even walked into the room to confront him. That incompetence, more than the attempted betrayal itself, is what truly enrages him. He disassembles his own progeny like a demonic surgeon – picking them apart one by one and leaving them in a quivering mess in the corner.

Again though: nothing truly physical has occurred here. Logan stands up exactly once and yells exactly once. No one is struck. No one even cries, save for Roman’s brief choke after gasping out “dad.” At the end of the day, none of this will even significantly affect the Roy kids’ bottom lines. Hell, just last episode Kendall begged his father to let him out and was denied the opportunity. Somehow though the pain of this parental betrayal consumes all like a thick fog of pure misery spreading across the room. Kendall, Shiv, and Roman’s defeat is so total and their pain is so real that it’s a shock that composer Nicholas Brittel’s brilliant soundtrack isn’t replaced by The Rains of Castamere. The Roys don’t deserve our pity but they get it all the same. That’s the magic trick of well-crafted drama…hell, of well-crafted storytelling in general.

Though Succession borrows much of its plotting and vibes from Shakespeare, in considering this finale I’m reminded of a far more recent tragicomic genius: Dan Harmon. In the pilot episode of Harmon’s NBC sitcom Community, lead character Jeff Winger (Joel McHale) is charged with bringing his study group back together after tearing it apart. Ever the capable lawyer, Jeff steps out to deliver an inspiring speech with the help of the pencil as a prop.

“I can pick up this pencil, tell you its name it’s Steve, go like this, and part of you dies on the inside,” Jeff says, snapping the pencil and witnessing his peers’ horrifying reaction.

Jeff’s point is that people can sympathize with anything, so why can’t the study group sympathize with each other? That pencil had a name and mere seconds after learning it, his friends became invested in it. The Roy family members on Succession are arguably less sympathetic than even pencils. Pencils don’t fundamentally make the world around them worse. The Roys do.

When the Roys are snapped in half, however, our horrified reaction is still the same. We can’t help but care and Succession knows that.

The Magicians Season 4 Episode 1 Review & After Show
Robot Chicken DC Comics Special 3: Magical Friendship – Official Trailer
Why Diablo Immortal May Already Be Doomed
Stranger Things Season 4: Could Vecna’s Victims Be Key to Defeating Him?
15 Difficult NES Games That Were Easier in Other Regions