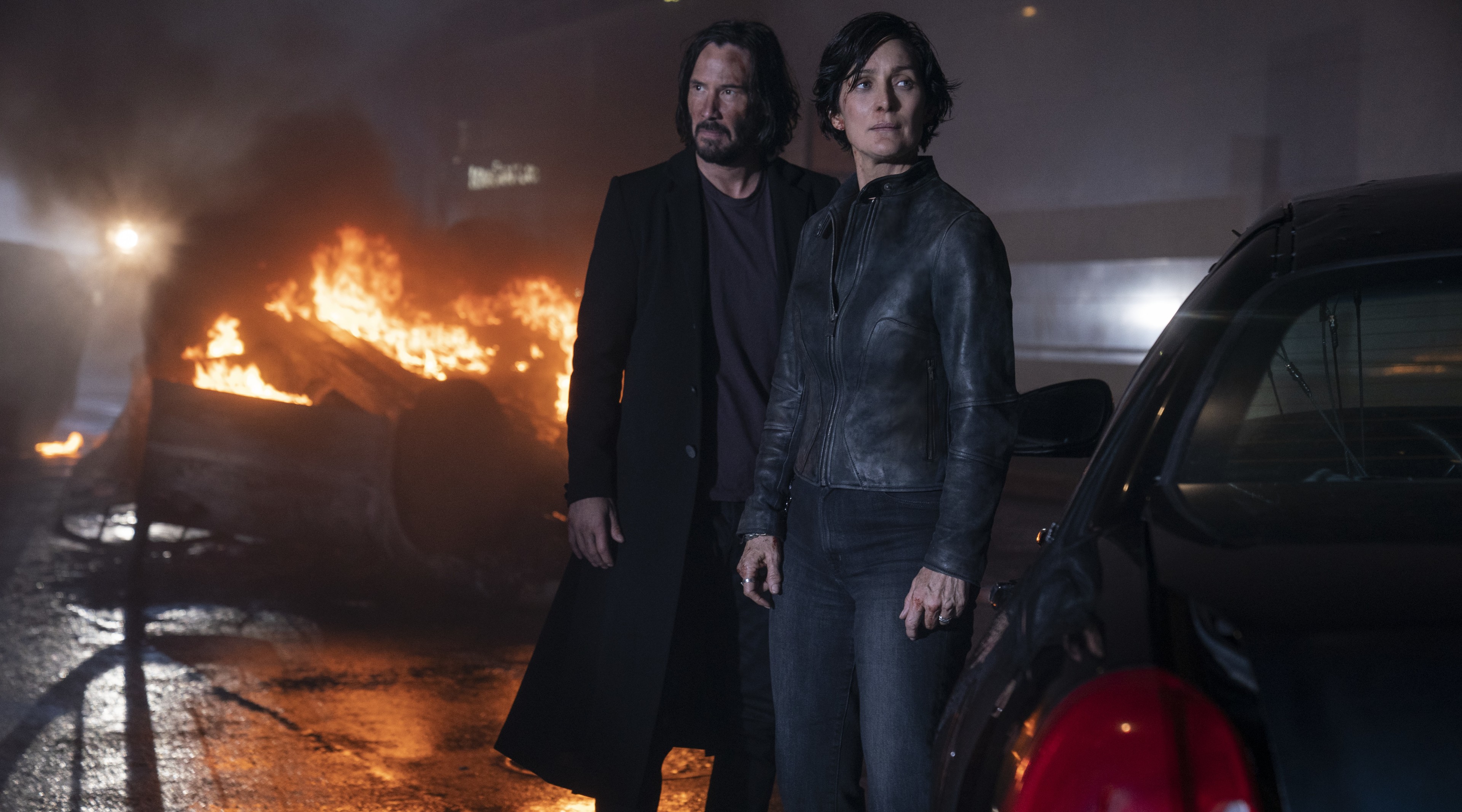 No two Matrix movies are alike. We remember the original as a revolutionary cyberpunk action film that introduced audiences to “bullet time” and the “wire fu” action sequences of the East. But The Matrix sequels weren’t just more of the same: The Matrix Reloaded is in many ways a superhero fantasy with the kind of CG spectacle we take for granted in the Marvel age. Meanwhile, The Matrix Revolutions could best be described as a manga and anime-inspired mecha horror movie, an absolutely twisted conclusion to the story that feels like the Wachowskis’ answer to the equally controversial The End of Evangelion.

Now, almost 20 years after the end of the original trilogy, how do we describe The Matrix Resurrections, a legacy sequel that’s at once a nostalgic look back at 1999 as well as a standalone continuation of Revolutions? Simply put: this is a love story, within an action movie, within a meta exploration of our obsession with nostalgia. If Lana Wachowski’s love letter to Neo, Trinity, and Morpheus is guilty of anything, it’s that at times it is too ambitious for its own good and can’t quite stick the landing in the third act. But ambitious is what a Matrix movie should be, and Wachowski takes incredibly big swings over the course of the film’s two and a half hour runtime. The result is a sequel that’s as delightfully weird as it is satisfying, especially for those like myself who love Reloaded and Revolutions as much as the original.

Resurrections has remained surprisingly unspoiled through its months-long marketing campaign, a true rarity in a year that also saw the release of Spider-Man: No Way Home, arguably the leakiest movie in blockbuster history. But just a day from release, The Matrix Resurrections‘ biggest secrets have been kept. Sure, you’ve probably read plenty of online fan theories and speculation pieces that sound like they might be right, but I guarantee you that no one has guessed correctly. This is my roundabout way of saying that it’s really difficult to talk about this movie’s plot without spoiling something…

But here goes: a new generation of runners are on a desperate mission to find Neo (Keanu Reeves), who is somehow back in the simulation despite his death in Revolutions. The only problem is that Neo is actually Thomas Anderson, a shell of his former self who’s hooked on the blue pill and can’t remember his past life. With the Machines closing in on humanity, it’s up to heroes Bugs (Jessica Henwick) and a new, younger Morpheus (Yahya Abdul-Mateen II) to free Neo’s mind before it’s too late.

Yet, the rabbit hole goes much deeper than that. The film wastes no time giving us answers to some of its biggest mysteries while also setting up even bigger questions in the first act that pay off in mostly interesting ways. Despite the movie’s length, Wachowski’s script, which she co-wrote with novelists David Mitchell (Cloud Atlas) and Aleksandar Hemon (Nowhere Man), benefits from the film’s brisk pacing, although it’s sometimes too plot-heavy for its own good, especially after it takes a big turn halfway through.

Indeed, the movie’s first hour is its strongest, a mind-bending tumble through what’s real and what isn’t that also reckons with the saga’s legacy in unexpected ways. The Matrix Resurrections might be the most self-aware nostalgia play ever put on the big screen, delivering loads of easter eggs and references while at the same time commenting on why audiences have come to love these shallow winks so much. This aspect of the movie is every bit as wild as you’d expect from Wachowski, who is clearly having loads of fun with the material that’s half social commentary and half wish fulfillment for those fans who’ve ever wanted to watch Neo and Trinity kick ass one more time.

Unfortunately, Resurrections also tackles the unenviable task of following up, and at times over-explaining, the events of its predecessors, especially Revolutions, which is often described as the trilogy’s most convoluted and alienating installment. As much as I wanted to love the sections of the movie that picked up where the story left off in 2003, they’re by far the weakest parts of the film. Wachowski, Hemon, and Mitchell fall into the same trap from 20 years ago, with the movie slowing down to a crawl for a long info dump full of new Matrix-y jargon midway through that only weighs the film down. I thought I’d be delighted to see Wachowski boldly pick up the threads of The Matrix‘s most maligned sequel and make them something really special, but when the first half of the movie is so weird and brilliant, the more straightforward approach later in the picture feels like a little bit of a let down. Let’s just say I don’t expect Resurrections to make fans out of those who disliked the first two sequels.

What absolutely does work is the chemistry between Reeves and Carrie-Anne Moss, who reprises the role of Trinity but (again) not in the way you expect. Four installments in, Reeves and Moss are still digging up new sides of these characters. Their reunion in Resurrections doesn’t feel so much like an Agent-bashing retread but something much more refreshing and romantic. It’s through them that Wachowski is able to explore some much more personal material about time lost and second chances, all leading to a very cathartic third act that’s pure kung fu and wish fulfillment.

Yes, there’s loads of action in The Matrix Resurrections courtesy of Neo, Trinity, Morpheus, and Bugs, from slow-motion bullet hells jam-packed with gravity defying stunts, to chaotic car chases, to one particularly stunning leap of faith off a giant skyscraper. The action sequences are fun as hell, but don’t expect anything quite as innovative as the original. I did find the kung fu portions a little underwhelming compared to what’s come before, but fans will be happy to know that these fight sequences involve more practical effects and way less CG. Ultimately, all of these set-pieces are showcases for how Wachowski has evolved as an action director, with shots that feel more grounded even as incredible things are happening on-screen. Gone are the heavy-handed effects of Reloaded — you definitely won’t hear bowling pins crashing down as Neo and Trinity punch their way through the bad guys.

Henwick and Abdul-Mateen II’s turns as the leaders of a new generation of heroes are major highlights too, but I can’t help but feel the film’s resolution lets them down for reasons I won’t get into here. That said, by the end of the movie, both the acrobatic Bugs and surprisingly funny Morpheus have more than earned a spin-off or two. I really want to see these characters on the big screen again. Don’t sleep on Jonathan Groff or Neil Patrick Harris’ mystery characters either.

Nothing in the movie quite tops its initial premise but there’s no doubt that The Matrix Resurrections more than justifies its existence in the end. This is no cynical corporate cash grab like so many other legacy sequels that have released in the decades since Neo first saved Zion. Instead, it feels like a story that Wachowski, the writers, and the actors needed to get off their chests. It’s beautifully shot, flushed in color (scenes are drenched in green, blue, and thick, oppressive reds), a little messy, and very weird. That, to me, is a worthy Matrix movie.

The Matrix Resurrections is out in theaters and streaming on HBO Max on Dec. 22.