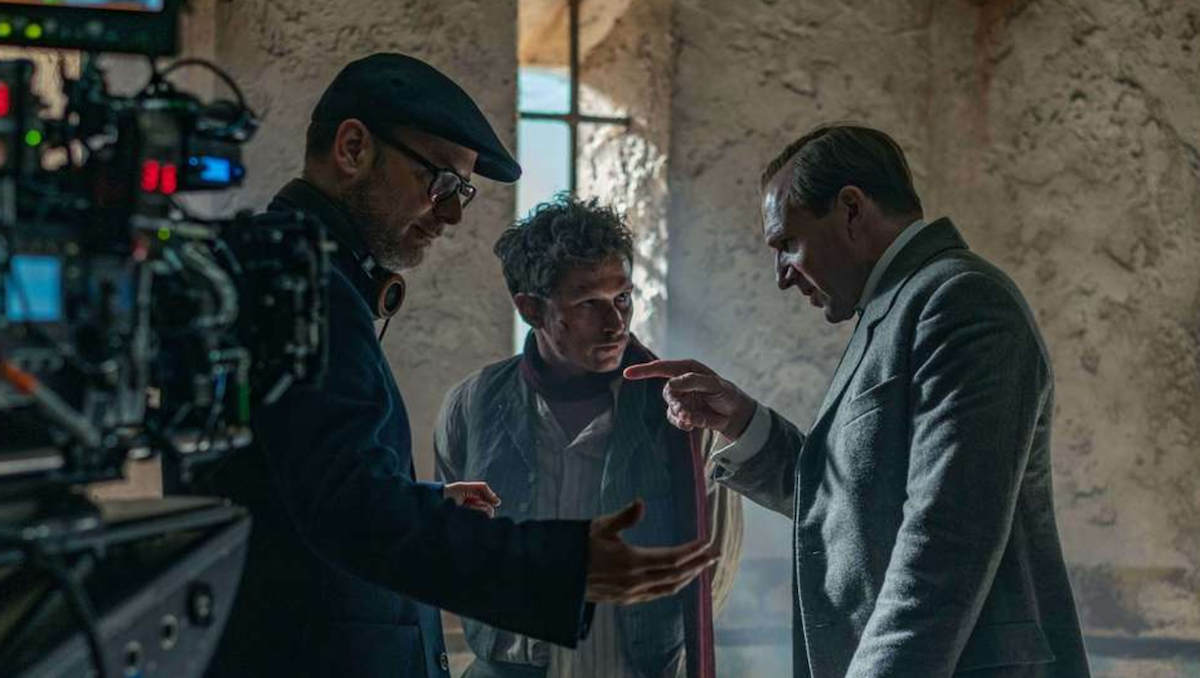 Matthew Vaughn loves watching The Man Who Would Be King (1975). It’s easy to see why. The John Huston adaptation of a Rudyard Kipling yarn is one of the best adventure films ever made, not least of all because Huston and his co-screenwriter Gladys Hill were able to quietly insert some anti-imperialist critiques into the story of Danny and Peachy (Sean Connery and Michael Caine), two former British sergeants in 19th century India who turn soldiers of fortune and, eventually, men who might call themselves living gods. It doesn’t end well for either, and yet there is something so adroit about the performances that they never cease to charm.

They more than charmed Vaughn during a recent rewatch, however. They inspired him to approach his whole Kingsman universe, which he has developed across three films at his production company, Marv Studios, from an entirely different angle: one where the proverbial stiff upper lip was never raised higher, the sun had yet to set on the British Empire, and blokes like Danny and Peachy could get in over their heads and still be proper gentlemen about it as the ground (or rope bridge) vanished beneath their feet.

“I forgot just how amazing it was,” Vaughn tells Den of Geek on the eve of The King’s Man’s theatrical release. “I was laughing that there was a Kingsman already in it… and it had everything a movie should have. It was epic, adventurous, [it had] emotion, a great story, and some important statements, politically and morally.”

When it was over, Vaughn turned and said, “Why don’t I make The Man Who Would Be Kingsman?”

So began the first step to this holiday season’s The King’s Man, a cheeky and overtly stylish action movie that is, yes, a prequel to the 2015 surprise smash, Kingsman: The Secret Service, but also a proper spy adventure set during the First World War. In the new film, lead characters Orlando Oxford (Ralph Fiennes) and his son Conrad (Harris Dickinson) interact with real historic figures like the literal King of England (Tom Hollander), as well as Archduke Franz Ferdinand, the Austrian noble whose bizarre assassination in Serbia shockingly triggered the Great War.

When we chat with Vaughn, he reveals that he never intended to do a Kingsman prequel back in 2015. Similarly, the WWI angle was more or less decided for him by the dropped line in the first picture about the Kingsman organization being founded after the war—“I couldn’t say, ‘Know what? I’m going to change the folklore,’” Vaughn laughs. But by digging into the history around World War I, he was struck by just how startling the details still are.

For instance, the scene where (spoiler) Archduke Ferdinand is slaughtered in the streets of Sarajevo really did involve a royal swatting away the first grenade intended for their car, causing it to blow up beneath another vehicle in the procession. In The King’s Man, it just gets to be Conrad who prevents the initial attempt on Ferdinand’s life.

That’s small potatoes though when compared to how a character like Grigori Rasputin is realized on-screen. In history, Rasputin was a self-proclaimed holy man in Imperial Russia who managed to capture the ear of Tsar Nicholas II. But on-screen he’s played by Rhys Ifans as a gregarious demon who will attempt to seduce anything on two legs, and when that doesn’t work settles for instigating one of the best fight scenes in years.

“I could never come up with a person like Rasputin,” Vaughn marvels. “What an amazing, amazing character.”

That might be, but he can come up with dynamic action for such a person. As with the best set-pieces in Vaughn’s action movie oeuvre—from Chloe Grace Moretz’s Hit-Girl rescuing Nicolas Cage in Kick-Ass to Colin Firth obliterating an entire church filled with possessed bigots in a single take during Kingsman—the scene where Fiennes locks swords with Rasputin’s high kicks is a case study in precise, giddy choreography and stunt work. For Vaughn’s part, he doesn’t think he asks his actors or stuntmen to perform feats that different from other filmmakers; he just knows how to frame them.

“Every shot is telling a story,” says Vaughn, “and I find with some other action movies, once you go into action mode, it’s just action, and you could cut it into another action film and it would all still be just action. They forget to tell the story and the stakes.”

Yet to Vaughn, the stakes of a Christmas Eve duel in the Kremlin were clear: he needed his longtime stunt coordinator and second unit director, Brad Allan–a collaborator who understood how to lean into the specificity of a sequence.

“We started doing some research into ballet and the cossack dancing,” Vaughn explains, “and then I found out cossack dancing used to be fighting and then they got told they couldn’t fight in that style anymore, this Russian kung-fu, and it then became a dance. So I was thinking if some guy could be bouncing off their ass with one foot off the ground while kicking you, you could be in trouble. So let’s take the dance, let’s take the action, and let’s bring it all together.”

Vaughn couldn’t have had a better collaborator in executing such visually kinetic mayhem than Allan, a man whom Vaughn says was “my true partner in crime.” Which makes The King’s Man all the more poignant since it marks Allan’s last officially credited role as second unit director and supervising stunt coordinator.

Allan, who was only 48, passed away in August after a a dazzling career that began by working as Jackie Chan’s protege and one of his many on-screen sparring partners in films like Mr. Nice Guy (1997) and Gorgeous (1999), before he left Team Jackie to begin his own career as a stunt choreographer and coordinator. At the time of his passing, he had reached international acclaim for superhero movies like Wonder Woman (2017) and Shang-Chi (2021), as well as his partnership with Edgar Wright on movies like Scott Pilgrim vs. the World (2010) and The World’s End (2012).

But it’s arguable one of his first major successes as a stunt coordinator came when he masterminded those aforementioned Hit-Girl fight scenes in Kick-Ass with Vaughn.

“On Kick-Ass, it was quite interesting,” Vaughn recalls. “He’d been involved in so many movies where he just wasn’t respected at what he did and his stuff would be re-edited and ruined when he saw the film. So he had a lot of mistrust of me, and then he learned I truly loved action and that I worship Jackie Chan, and he was taught by Jackie, so there was a lot of common ground between us.”

Vaughn continues, “Then he came aboard with Kingsman, he’d gone off after Kick-Ass and worked on a few other Hollywood movies and had terrible experiences, but when he came back to do Kingsman, we sort of earned each other’s respect and trust.”

This carried them from the first Kingsman showstopper where Colin Firth intones, “Manners maketh man” in a London pub to the new movie where Allan and Vaughn turned a historic figure Rasputin into a regular Baryshnikov.

Says Vaughn, “[Allan] would take my crazy ideas and together we’d mold it to story, to choreography, to invention…. I’m making a movie at the moment without him where we did stunt business together, and he really has left a huge hole, and really just gone before his time. And yeah I miss him, just plain and simple. I totally miss him.”

The King’s Man thus stands as an unofficial tribute to that collaboration, from the Rasputin scene to others where Fiennes, an Oscar nominated and BAFTA winning actor, gets to climb up cliffside like he’s David Niven—The Guns of Navarone (1961) is another touchstone for Vaughn—and then cross swords with the Empire’s greatest unseen foes.

Vaughn claims that Fiennes’ current role as M in the James Bond movies was never a deciding factor in casting him in The King’s Man. Rather, the director suggests, who else could be more dapper and charismatic as the droll original Kingsman? With that said, he’s thrilled audiences may see the M and Voldemort actor in a new light–and even something closer to Errol Flynn, an idol for Fiennes whom he and Vaughn both studied while prepping this movie.

“Those guys were really not appreciated for what they were doing on-camera,” Vaughn says of the stunt work in films like The Adventures of Robin Hood (1938) and Captain Blood (1935). “So I said, ‘Ralph, we’ve got to get as good as that and then we can put the cameras in different places. We’ve got technology that they didn’t have.’ But he learned it. Ralph went out [with] all that sword fighting, and he was good. He did a lot of sword fighting in school for stage and for Shakespeare, and he loved it. He really loved doing the action.”

When audiences are finally able to see it on the big screen, it’ll be at a moment where attentions are clearly divided. Indeed, last weekend’s Spider-Man: No Way Home was such a massive success at the box office that there were reports of theaters cutting screenings for the weekend’s other ostensible major releases. And when we spoke with Vaughn, he was aware of how the theatrical moviegoing industry is increasingly only favoring one massive spectacle at the expense of all others.

Yet he’s hopeful that The King’s Man can find its audience, because here is an action spectacle that, despite its inherently cheeky sensibility and century-old setting, feels surprisingly vital to our current moment.

Says Vaughn, “There’s a lot we can learn from this history. Choose your leaders wisely, little things can become very big things very quickly, the world can change. Look at what happened [then], and what we’re experiencing now. Look at Ukraine and Taiwan, and Spanish Flu and COVID.” He later adds, “We’re going through a very strange period of history where we’re all part of a new history being written.”

It’s perhaps nice then to be reminded of another century’s inflection points through the cheerful lens of the Kingsman and their like, be they Orlando and Conrad, or Danny and Peachy.