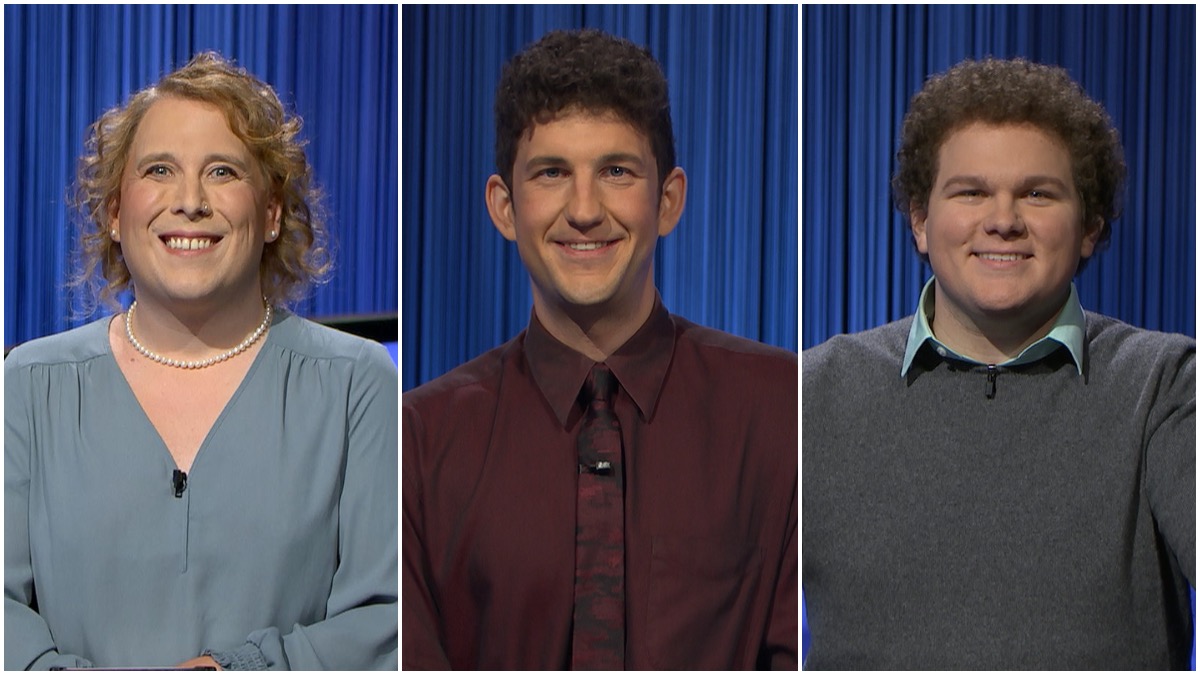 Stop us if you’ve heard this one before, but a Jeopardy! contestant is absolutely dominating the field right now.

Current champion Amy Schneider of Oakland, California is currently riding a 19-game winning streak in the venerable American quiz show. Many of those 19 victories have been absolute laughers, with Schneider leaving her opponents in the dust. She currently has nearly $750,000 in regular season winnings and her dominance in the Final Jeopardy! round is shocking even current Jeopardy! guest host and forever GOAT Ken Jennings.

In nearly any other of Jeopardy!’s 38 seasons, Amy Schneider would be the biggest story of the year. And yet, she’s not even the most decorated winner of this current season. That honor goes to Matt Amodio, who earlier this year ended his remarkable run at 38 games (good for second all time behind Jennings) and $1,518,601 earned (good for third all time behind Jennings and James Holzhauer).

Amodio would eventually be defeated by Jonathan Fisher, who turned in an impressive 11-win performance himself, breaking the record for most games won after dethroning a “super-champion”. Even more “modest” winners are setting records, like 5-game winner Andrew He earning a record of $52,001 for a champion’s first appearance (the second place finisher earned $51,999 which is, you guessed it: another record).

More than in any other era of Jeopardy!, the show’s lengthy record book feels particularly vulnerable. It all begs the question: are Jeopardy! contestants getting better or is the show getting easier?

The first thing you need to know when confronting this question is that “is Jeopardy! getting easier?” is a popular historical query. Like longtime SNL fans wondering if the show has gotten worse (it hasn’t) or THC enthusiasts wondering if weed has gotten stronger (it has), Jeopardy! fans always have their eye on the strength of the show’s questions. There are dozens of Quora and Reddit posts from throughout the past decade featuring fans asking this very question. Predictably, none of them are able to settle on a firm answer.

Truthfully, there is really no way to assess for sure whether Jeopardy! questions are getting easier because trivia, by its very nature, is context dependent. While studying certainly helps, learning trivia is really about the lifetime accumulation of knowledge. In acquiring that knowledge, one’s environment and culture is crucial. Jeopardy! questions run the gamut from American pop culture to mathematics to geography to more. It’s a diverse array of content that most Western intellectuals should be able to handle. But should the writers decide to randomly troll their contestants and base an entire episode around “Mid ‘70s Korean TV Dramas”, the objectively smart people onstage would likely be seem quite dumb.

With that in mind, it’s nearly impossible to say whether the questions are getting harder because what constitutes a “difficult” question is intensely subjective. Still, with the increased number of super-champions that Jeopardy! has seen in season 38, something must have changed, right? Well, as we all know, quite a bit has changed in terms of Jeopardy!’s personnel, if not its structure.

The most obvious difference between the past season of Jeopardy! and the 37 that preceded it is the absence of beloved host Alex Trebek. Trebek, who died in early 2020, was the consummate Jeopardy! professional. He was a steadying presence for the chaotic game, delivered questions with concise grace, and even provided important context after answers. Still, while losing Trebek was heartbreaking, there’s no reason it should have led to a change in question difficulty.

In addition to the hosting turnover, Jeopardy! infamously underwent some other behind the scenes personnel changes in its 37th and 38th seasons as well. Harry Friedman, who served as producer of both Jeopardy! and Wheel of Fortune since 1999, retired from the role in 2020. His replacement Mike Richards, flew a bit too close to the sun and was fired in 2021, leaving Michael Davies to take the top job. Throughout all the high level palace intrigue, however, the writing and researching staff has remained static for many years. In fact, current editorial producers Billy Wisse and Michele Loud have been with the show since 1989.

This all leaves us with only one likely conclusion to draw: Jeopardy! contestants really are probably getting better. And there’s a good reason for that.

Dating back to James Holzhauer in 2019, the current crop of Jeopardy! super-champions all have something in common. They’re relatively young. Contestants like Holzhauer, Amodio, Schneider, and Fisher haven’t just grown up with Jeopardy! (like many previous longtime champions have), they’ve grown up with the Jeopardy! “meta”.

Though Jeopardy! is a relatively simple game show, having the right strategy still matters. Jeopardy! fans in places like r/jeopardy and JBoard.tv have made cracking the code to the game show a group effort. It’s through a steady stream of online conversation and analysis that Jeopardy! fans have established strategies like hunting for Daily Doubles, betting effectively on Final Jeopardy!, and understanding what kind of questions are most likely to be asked.

Contestants like Matt Amodio and Amy Schneider, while brilliant, have also had the benefit of taking in years of Jeopardy! analysis from a thriving online community. Simply put: Jeopardy! questions have not gotten harder. But they may need to soon if they want to outpace the intelligence, experience, and expertise of Jeopardy!’s fandom.