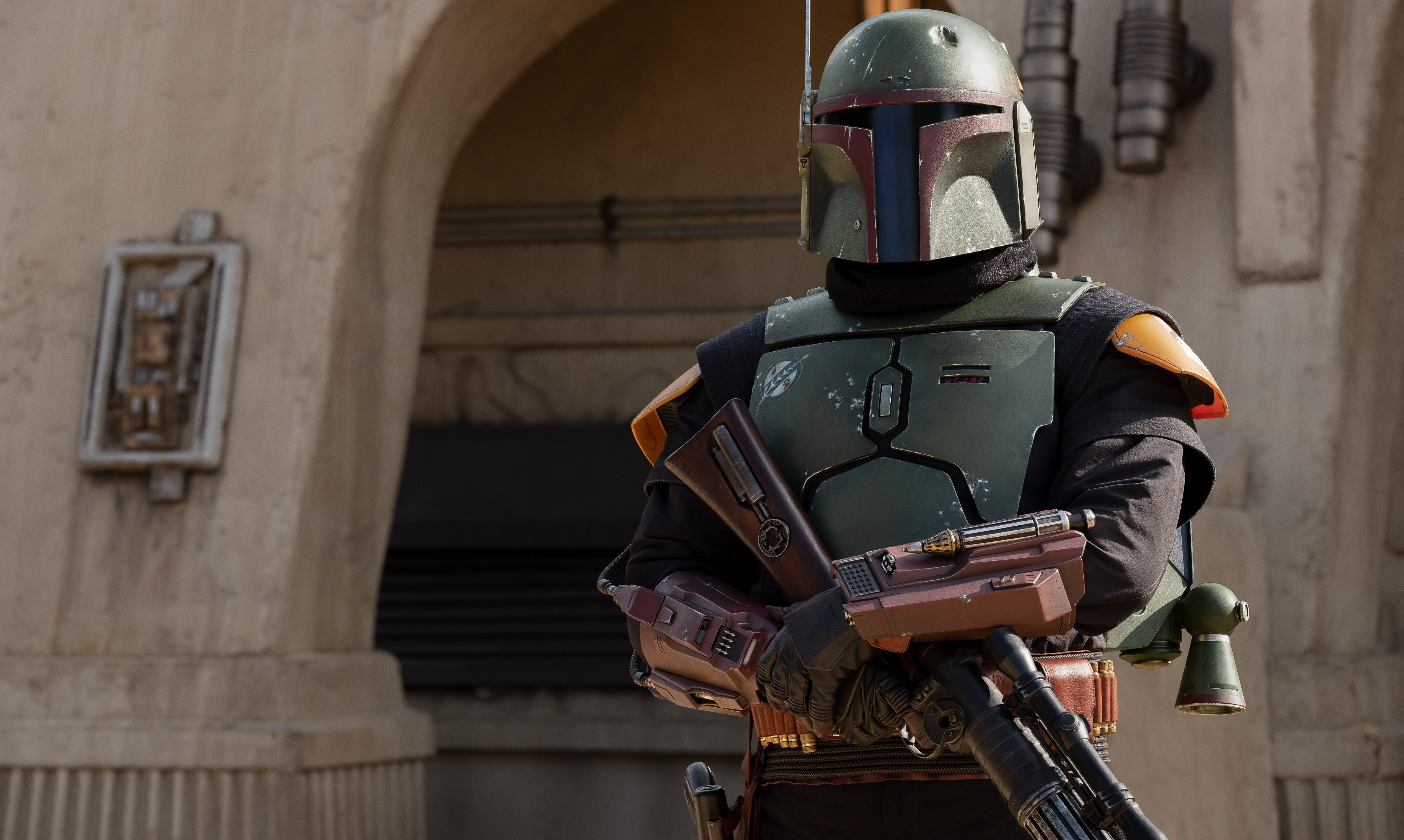 Despite the desert planet’s reputation as the middle of nowhere of the galaxy, a lot of things happen on Tatooine. In the second episode of The Book of Boba Fett, the bounty hunter turned crime lord digs further into Mos Espa’s underworld and learns from the Tusken desert-dwellers. Along with the Tusken culture we detailed last week, there are quite a few Star Wars deep cuts to see in “The Tribes of Tatooine.”

The Hutt twins’ Wookiee bounty hunter is Black Krrsantan, a key character in Marvel’s Doctor Aphra series and other comics. He worked for Jabba the Hutt in the era of the Empire as well as Darth Vader. During this part of his career he also fought Han Solo and Chewbacca. Black Krrsantan was a brutal fighter, whether in hand-to-hand combat or with his species’ signature weapon, the bowcaster.

The Pyke Syndicate appears here after numerous animated appearances in The Clone Wars and their live action debut in Solo: A Star Wars Story. A large gang, they traffic in spice, fuel, and people. The leader of the gang in this episode appears to be a new character, but wears a smaller version of their signature snake-inspired helmets.

Order of the Night Wind

The assassins who went after Boba and Fennec turn out to be from the Order of the Night Wind, a new (or at least newly named) group. They bear a passing resemblance to the Kage Warriors, a group Boba Fett encountered in The Clone Wars (also in an episode with a train), but there doesn’t seem to be any connection.

– The Hutt twins are new characters, said to be Jabba’s cousins.

– They delayed their trip to Tatooine because they were enjoying the “debauchery” of Nal Hutta, the Hutt homeworld. This planet has appeared in numerous tie-in media, including in The Clone Wars, which showed the ruling body to be a “Grand Hutt Council.” George Lucas created the original design of the planet, a swampy place. Later, The High Republic series stated that the swampy state isn’t natural, but a result of an invasion of the sapient plant creatures known the Drengir.

– The Hutts have carved out their own empire at the edge of the Republic, known as Hutt Space. It has remained independent under both Republics and the Empire, although it faces attempts at takeovers from both inside and out.

– The insult the assassin throws at Boba Fett is “E chu ta,” a Huttese curse. It featured in The Empire Strikes Back to show the dire straits the characters found themselves in at Imperial-occupied Bespin, as C-3PO is shocked even a fellow protocol droid would be so rude as to say it to him.

Showrunner and director Robert Rodriguez voices Mayor Mok Shaiz, the Ithorian in charge of Mos Espa. Ithorians speak in a multi-layered language with one mouth on either side of their necks, requiring the mayor to wear a translation device to speak Basic.

One of the most famous Star Wars locations that never officially appeared on film, Tosche Station is where Boba rustles up some speeder bikes. It’s established as Luke Skywalker’s local hangout in A New Hope.

A scene that would have shown Luke hanging out with his friends and watching the battle where the Empire captured Princess Leia was cut from the film but today can be found pretty easily online. At the time of A New Hope, Tosche Station was more of a garage and repair shop than a bar. It was a sleepy place for rural teens to hang out. It appears to have gotten much seedier in the meantime, now serving as a bar where alien Nikto miners push the human regulars around.

Those regulars are Laze “Fixer” Loneozner (Skyler Bible) and Camie Marstrap (Mandy Kowalski), two of Luke Skywalker’s friends from the aforementioned deleted scene. Both tended to gently mock Luke and his friend Biggs, calling Luke “Wormie.” Laze and Camie were originally played in A New Hope by Anthony Forrest and Koo Stark, respectively.

– The spice on the train is coming from Kessel, the infamous planet where gangs use slave labor to harvest the drug. It has appeared as a criminal hot bed in both canon and Legends after C-3PO first mentioned the dismal conditions of the mines in A New Hope. The planet finally appeared on the big screen in Solo.

– The lava planet Mustafar makes a fitting metaphor for being in hot water. It’s the site of the climactic fight between Obi-Wan Kenobi and Anakin Skywalker/Darth Vader in Revenge of the Sith. It later appeared at the start of The Rise of Skywalker.

– Like in the first episode, we see a glimpse of Kamino, Boba Fett’s homeworld from Attack of the Clones. Its destruction at the hands of the Empire was dramatized in The Bad Batch.

The rocket engine on top of the train looks salvaged from a pod racer, the dangerous race cars of Tatooine as seen in The Phantom Menace.

– Tuskens continue to take roughly the role Native Americans tend to take in Western movies, as people with knowledge of the land and little technology who work with a heroic outsider.

– Trains and train robberies are a staple of Westerns, with too many appearances and subsequent parodies or references in other genres to list.

The episode was directed by Steph Green. You’ve definitely seen her work in many other genre series, including Luke Cage, Watchmen, The Man in the High Castle, Bates Motel, and Preacher. The Book of Boba Fett is her first Star Wars credit but hopefully not her last!