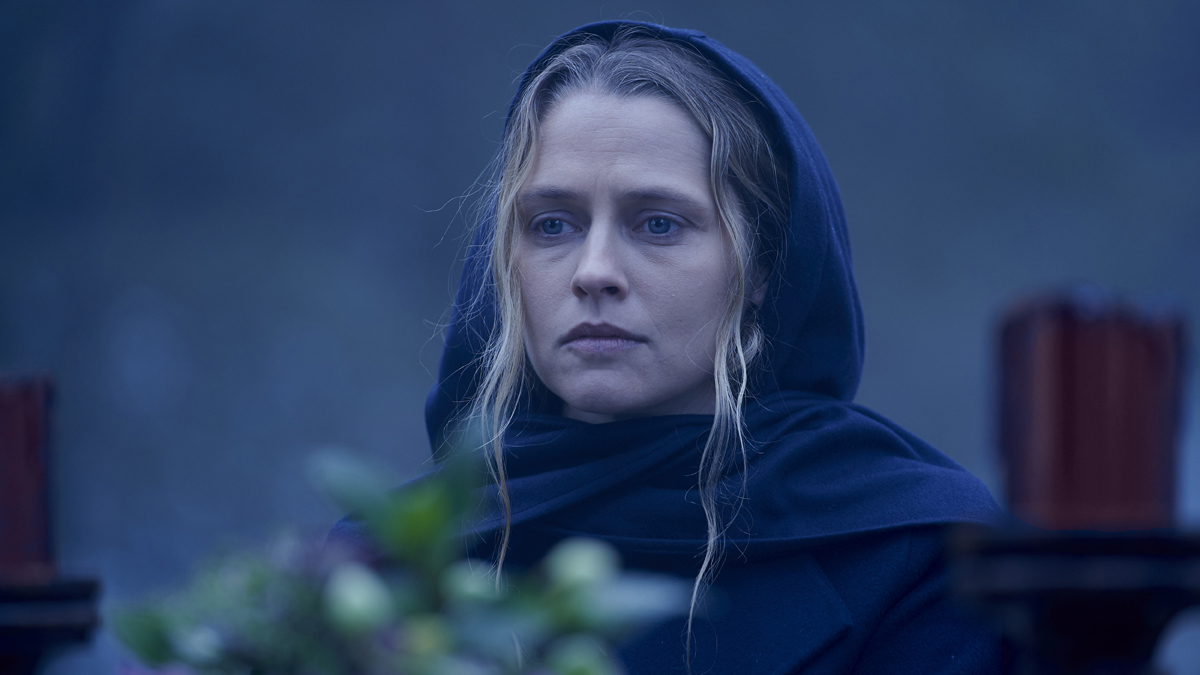 Warning: this A Discovery of Witches review contains spoilers.

They may be magical creatures ruled by mystical rites, but when it comes to family, the vampires, witches and daemons are no different from the rest of us. Gather the clan together under one roof and pretty soon it’s all rivalry, resentment and stalking out of dinner in a huff. One brother doesn’t like his new sister-in-law, the youngest wants the eldest to move with the times. ‘You’re breaking an ancient covenant’, ‘You didn’t tell me I carried a genetic disease that turned my vampire children into uncontrollably vicious monsters’…  All the usual beef. The only difference is that the de Clermonts get to do it in all a stunningly lit castle over a glass of what must be excellent wine.

Season three got off to a mournful start as Diana and Matthew time-walked straight to poor Aunt Em’s death bed. Sept-Tours has never looked more melancholy than in the aftermath of Peter Knox’s assault. The Roydons’ return was greeted with emptiness and silence, and then the shouting began. Matthew raged at Marcus for not stopping Knox, Marcus raged at Matthew for centuries of lies, and Baldwin raged at it all, having all but lost his grip on the family.

Even for a bunch of cold-bloods, that de Clermont dinner was a chilly affair. Having banished the lesser immortals to Sept-Tours’ servant’s quarters, Baldwin presided over a meal of political clashes and veiled insults. Peter McDonald (replacing Trystan Gravelle, who was tied up with filming commitments to The Lord of the Rings) fitted the role of de Clermont patriarch like a glove. It was all there – the flash of vulnerability at each mention of Philippe, the pass-agg swipe at Matthew and Diana’s future children, his derisory correction that Knox hadn’t killed a woman but only a (nose-wrinkle) witch… This new Baldwin can stay.

McDonald’s character though, may not stay the head of the family for much longer if Marcus’ breakaway plan has anything to do with it. (Thank you, A Discovery of Witches for upping all of our Scrabble games with the word ‘scion’.) Gallowglass reminded Marcus that division isn’t new for the de Clermonts – this lot have been at each other’s throats for centuries.

And the cause? Then as it is now: bigotry and the refusal to accept difference. Philippe wouldn’t recognise Hugh and Fernando’s relationship, and the pain of that injustice has been carried for 700 years. Sarah and Fernando’s delicately written and performed scene about the longevity of grief was a tender reprieve amidst all the table-thumping going on elsewhere. If there’s one silver lining to the sad loss of Em, it’s that Alex Kingston is finally getting some real lines, and good ones too.

Em’s funeral was another tender scene, and more proof that all the good traditions lie on the witch side of the magical creature divide – the vamp stuff is always so bloody and bestial, while we still know barely anything of daemon culture. That wasn’t corrected even by the welcome return of Greg McHugh as Hamish, whose potential was wasted after making that big helicopter entrance and then speaking barely a line – the sacrifice demanded by having such a big cast, and so many grand locations.

Speaking of big entrances and grand locations, a round of applause please for the Venice speedboat, (imagine the waste if Deborah Harkness had set Congregation HQ in an entirely more practical commuter town. In this show it’s Glamour. Every. Time.). Whenever that ancient cabal meets, A Discovery of Witches gives fans a little Bond movie thrill as a creature glides through through that magical barrier, wearing a pair of extremely cool sunglasses. It was Agatha’s turn this episode, and the scene that followed lived up to the intro. Never ones for a quick chat and a doughnut, the Congregation dialled the tension up and voted Peter Knox out. Good riddance, obviously, but was that wise? Would they not rather have a powerful witch like him on the inside of the tent and pissing out, rather than on the outside pissing in? Time will tell.

Another Bond movie location arrived in Dr Roberts’ incredibly slick and stylish Imperial College lab (there was definitely some dodgy big pharma funding behind that). Christopher Roberts, played by Ivanno Jeremiah, exemplified the spirit of a true scientist by demanding evidence and when given it, adapting his understanding to suit. One bouquet of water-flowers and Dr Roberts was in. Secrets of blood-rage, he’s coming for you.

Coming for Diana and Matthew is a new threat in the form of Benjamin, a brutal killer with a sadistic side. Matthew sired him in a “most terrible calculation” and then abandoned him, Dr Frankenstein-style. Now one way or another, Benjamin’s unresolved daddy issues are about to become resolved. Luckily for Matthew, his wife’s a badass weaver whose magical powers no know bounds. I know whose side I’m on.

A Discovery of Witches Season 3 is available to stream in the UK on NOW and airs on Sky Max on Friday January 7th at 9pm. It begins airing in the US on AMC+ on Saturday January 8th.