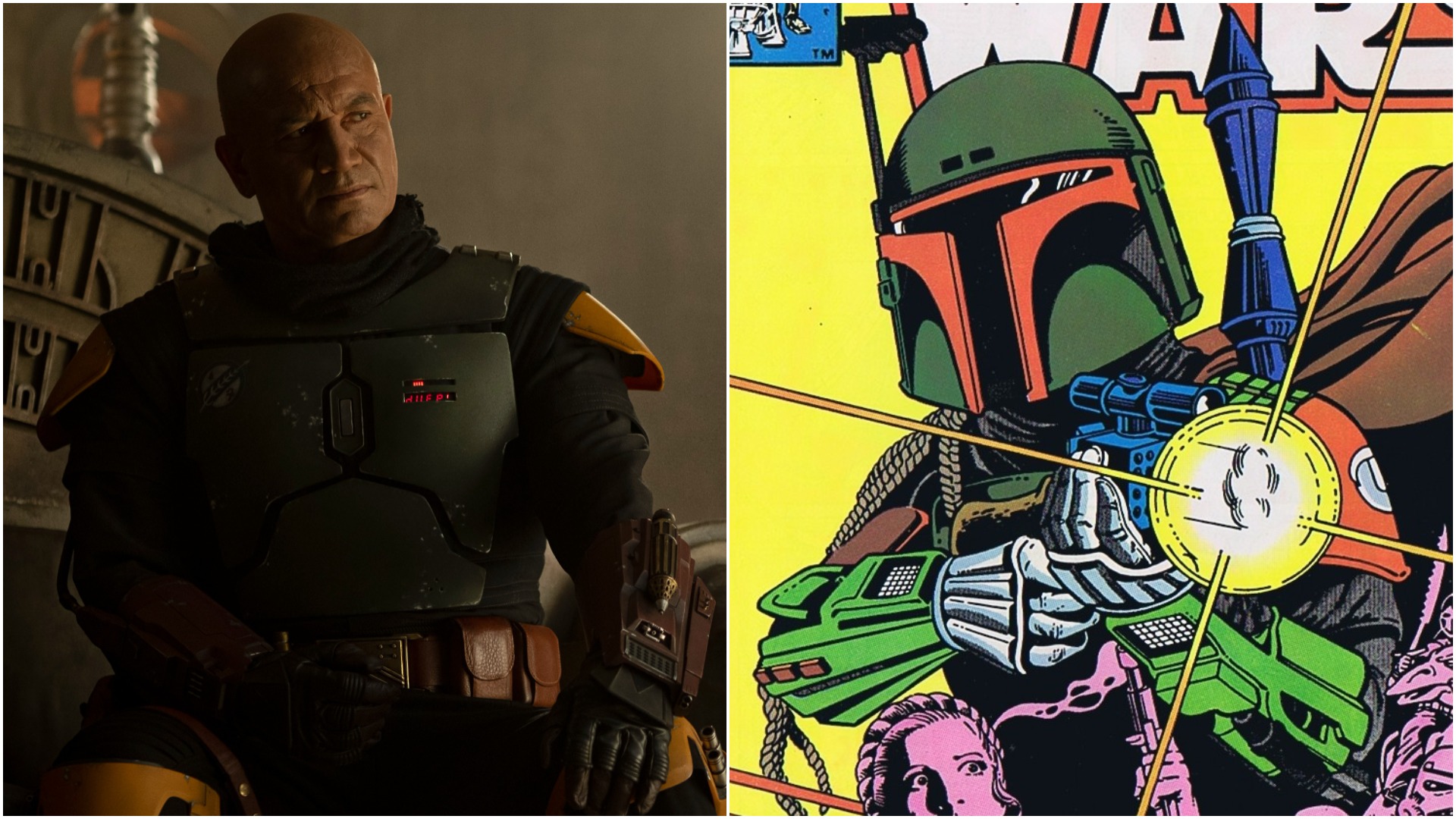 The Book of Boba Fett picks up the threads of the bounty hunter’s untold adventures in the years after Return of the Jedi, paving a new, unexpected path for the fan-favorite rogue. While most Star Wars fans expected the Mandalorian gunslinger to once again embrace a life of crime, no one could have predicted Boba’s big career change from bounty hunter to Tatooine’s newest crime lord.

But this is actually a Boba Fett story decades in the making. After all, writers were already hard at work continuing the book of Boba just mere months after he took a tumble into the sarlacc pit in 1983. Many of those early stories took place in the pages of the classic Star Wars comics published by Marvel in the ’70s and ’80s. It’s no surprise, then, that the new Disney+ series has already established several connections to Marvel comics, both new and old…

Boba escaped the dreaded sarlacc’s stomach almost as soon as he fell into the pit. On Dec. 13, 1983, just months after the release of Return of the Jedi, Marvel published Star Wars #81 by Mary Jo Duffy and Ron Frenz: the (now non-canon) story of how Boba survived his gruesome fate but found himself right back in the belly of the beast (literally) by tales’ end.

The issue takes a much more lighthearted approach to Boba’s escape. Instead of punching and burning his way out of the monster’s digestive system, the sarlacc burps out Boba, sending him flying into the sands above.

Like in The Book of Boba Fett, it’s those pesky Jawa scavengers who first discover an unconscious bounty hunter. But in this case, they confuse him for some sort of droid or cyborg, so they pack him into their Sandcrawler. He later has a run-in with Han Solo and Leia, who are trying to rescue Artoo from these same Jawas. Fortunately for Han, Boba is suffering from amnesia and doesn’t know he’s staring his mortal enemy in the face. Because of this, Han decides to try and rescue Boba too, but when Leia says the scoundrel’s name, the bounty hunter suddenly remembers what happened to him and shifts right back into kill mode.

The story ends with Han and Leia escaping the Sandcrawler as it goes crashing down into the sarlacc pit, dooming Boba once again to be slowly digested over 1,000 years. Don’t worry, he’ll get out again…eventually.

Boba’s story isn’t the only way in which The Book of Boba Fett pays homage to Marvel comics, though. That fearsome Wookiee bounty hunter introduced in “The Tribes of Tatooine” as the Hutt twins’ bodyguard? That’s Black Krrsantan, a character who debuted in 2015 in Marvel’s Darth Vader #1 by Kieron Gillen and Salvador Larroca, and who has become one of the foremost bounty hunters of Disney’s canon Original Trilogy era.

That first issue of Darth Vader begins Black Krrsantan’s story in the months after A New Hope, when the Dark Lord of the Sith is trying to hunt down the rebel who destroyed the Death Star. Already working for Jabba the Hutt alongside Boba Fett, Krrsantan is sent by the crime lord to aid in Vader’s search.

Krrsantan also fought old Ben Kenobi on Tatooine in one of the “From the Journals of Obi-Wan Kenobi” stories from Marvel’s Star Wars by Jason Aaron and Mike Mayhew. In issue #20 (2016), Krrsantan comes face to face with the Jedi Master after kidnapping Owen Lars, Luke Skywalker’s uncle. Guess who won that fight.

He’s had run-ins with Han Solo and Chewbacca in the comics, and even helped stop a plot to assassinate Emperor Palpatine in the pages of Doctor Aphra, which is where he’s appeared int he comics most recently.

With his arrival on The Book of Boba Fett, Black Krrsantan becomes one of the few Star Wars characters who has made the jump from comics to live action.

War of the Bounty Hunters and the Hutt Twins

Marvel’s War of the Bounty Hunters crossover event, which takes place just months before Return of the Jedi, provides a key piece of backstory critical to understanding the full scope of the power struggle in The Book of Boba Fett.

In that story, the Grand Hutt Council, the group that rules over the galaxy’s most powerful criminal organization, betrays Darth Vader for complicated reasons we won’t get into here. And when Vader discovers their treachery, he does what any Sith lord would do: he slaughters them all — except for Jabba, who was the only Hutt smart enough to remain loyal to Vader and the Empire. By the end of the Marvel series, Jabba is truly the last crime lord standing, at least within the Hutt Cartel.

Jabba’s death in the opening act of Jedi really does seem like the final nail in the coffin for the Hutts’ iron grip on the underworld, but we learn in The Book of Boba Fett that isn’t the case. Jabba’s twin cousins have come to Tatooine to collect what they believe is rightfully theirs, and are undoubtedly happy to kill Mos Espa’s new daimyo to get it.

In a way, the arrival of the twins is as much a continuation of the Hutts’ story told in War of the Bounty Hunters as well as Jedi.

They may not look like much but they’ve got it where it counts. “The Tribes of Tatooine” brings the little telepathic rodent-like species known as Hoojibs to live-action Star Wars. Native to the planet Arbra, the Hoojibs first appeared in Star Wars #55 (1981) when the Rebel Alliance arrive on their home world in search of a new base after barely escaping Hoth. In the David Michelinie and Walt Simonson story, the rebels help the Hoojibs reclaim their home by defeating a monster named Slivilith.

While Hoojibs are considered very deep cuts today, they were staples of ’80s Marvel comics. One Hoojib, the extremely cute Plif, even traveled with Luke on many of his later adventures! Plif later became a New Republic senator in the non-canon Legends continuity.

Clearly, Plif was having a better time than the Hutt twin’s Hoojib is on The Book of Boba Fett…