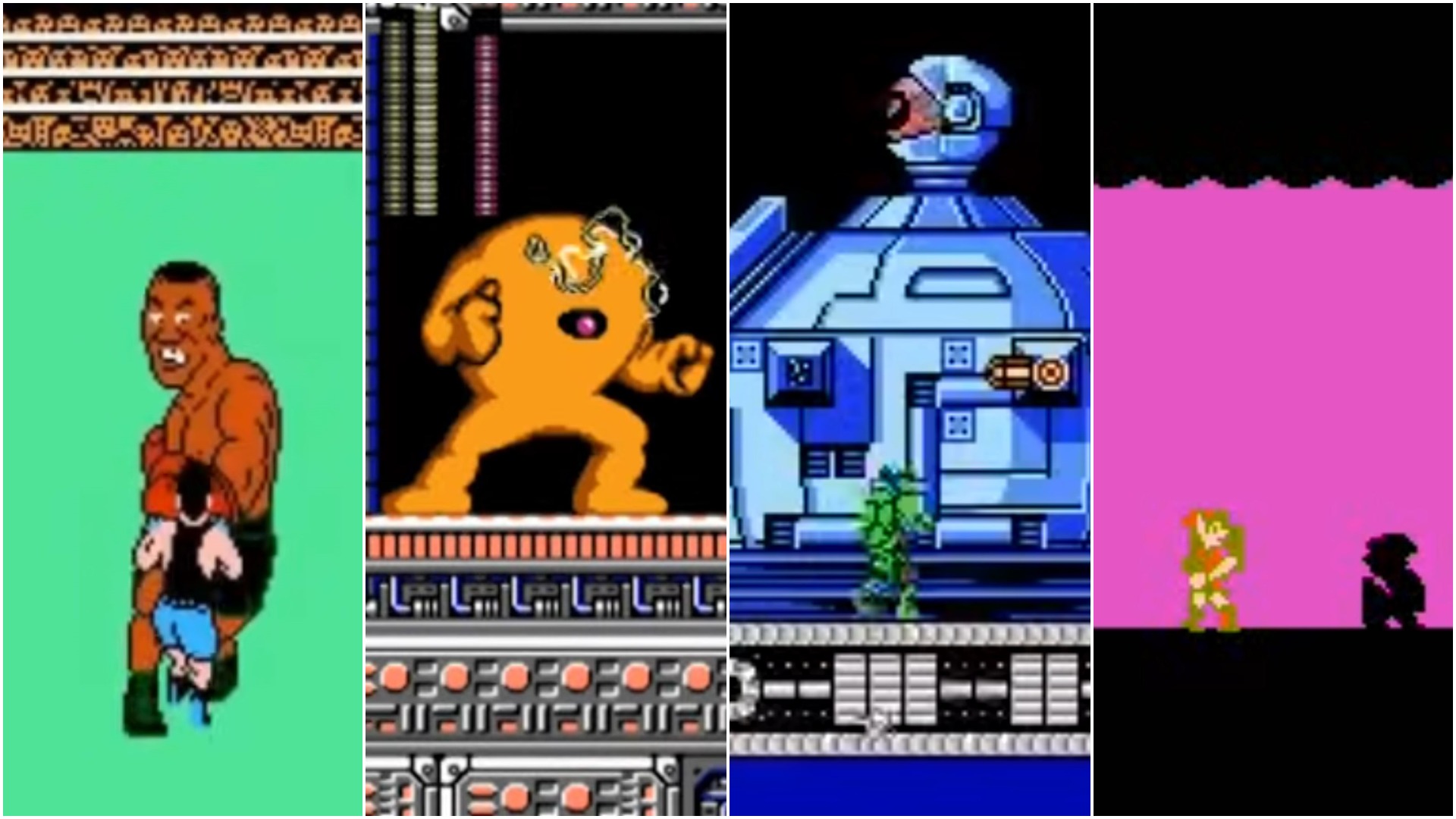 We’ve had a lot of fun in recent months looking at the history of some of the hardest games ever made, but it’s hard to talk about the most difficult games of all time without giving a little love to the boss fights that often make them as challenging as they are.

So far as that goes, there are few consoles in gaming history that can match the NES’ legendary lineup of difficult bosses that taught many of us the simple facts about the cruelty of life. Many of the best bosses of the NES era were screen-sized monstrosities that were designed to make us wonder why the developers hated us so much.

While no NES boss will ever be harder than whichever one haunted your childhood, these are the 15 NES boss fights that will break you no matter which games you grew up with.

As the champion of the VWF and a possible half-man/half-puma abomination, it makes sense that The Great Puma is the final boss of Pro Wrestling for the NES. What makes considerably less sense is The Great Puma’s absurd health pool, lighting-quick speed, and ability to use any special move in the game whenever he pleases.

It’s incredibly difficult to beat The Great Puma by pinfall (I’m honestly not entirely sure it’s possible), which means that you’ll likely have to resort to a number of cheesy alternate tactics and a little help from a turbo controller to stand a chance of getting past him. Remarkably, he’s not even the toughest final boss in an NES sports game…

Half of the battle against Judge Doom in Who Framed Roger Rabbit? involves figuring out how you’re supposed to read his health bar and how the game expects you to survive this fight’s second phase. Even after you’ve figured out the basics, you still have to deal with the fact that you have very few resources at your disposal that are capable of dealing even a noticeable amount of damage to the Judge.

It’s that brutal combination of confusion, repetitiveness, and a lingering feeling of absolute uselessness that makes this fight so tough to beat as well as an impossible to forget part of so many shattered childhoods.

Like a lot of the bosses from this era, there is actually a fairly easy way to cheese the fight against Machine Gun Willy. If you don’t know that very specific trick, though, then you are probably going to be left wondering why this game is asking you to bring your fists to a gun fight.

It’s bad enough that Willy’s machine gun deals so much damage, but the thing about this fight that will really start to drive you crazy is the fact that your own window of opportunity to deal damage to Willy without taking lethal damage yourself is so comically small. This fight demands that level of precision and patience that defines many of the toughest bosses from this era.

This bizarre and strangely difficult Addam’s Family game ends with the lovable Uncle Fester facing off against a massive alien construction that feels like it belongs in a Contra game rather than this consistently frustrating action-adventure title that rarely gives you a way to properly defend yourself.

Yes, there are some ways to cheat this boss fight and avoid taking damage, and you had better take full advantage of them. Otherwise, you’ll be left in a “fair fight” with a bullet hell-style boss whose ability to fill the screen with deadly projectiles is made that much worse by the realization that he really only needs a couple of shots to end your run.

There’s certainly no shortage of difficult bosses in the early Mega Man games (more on that in a bit), but it really shouldn’t come as a surprise that Mega Man 3’s Needle Man is still considered to be one of the absolute toughest enemies in the history of this difficult franchise.

Needle Man is one of those classic Mega Man bosses that utilizes an attack pattern that may not technically be random but is close enough to random to make you wonder just what it is this game expects you to do about it. It also only takes a few hits from one of his varied attacks to drain your health pool and inspire you to throw your controller in the air.

Towards the end of the already difficult Bucky O’Hare, you’ll suddenly find yourself piloting a small escape pod and navigating some especially frustrating “shoot ’em up” stages. The change in pace is tough enough, but what really puts this sequence over the top is the fact that you soon find yourself battling the dreaded Toad Air Marshall and his ability to fill the screen with projectiles all while outrunning a wall of fire that is constantly creping from the left of the screen.

I can’t overemphasize how jarring that change in gameplay is or the sheer amount of stuff that this sequence throws at you and expects you to overcome. Even games from this era are rarely this cruel.

The notoriously hard Jackal (a top-down shooter in the style of Ikari Warriors) saves its most devious challenge for the very end when you’re tasked with assaulting the enemy fortress and soon find yourself surrounded by suicidal soldiers, cannon fire, tanks, helicopters, and pretty much every other kind of nemesis and nuisance you can possibly imagine.

This kitchen sink-style fight concludes with a one-on-one duel against a massive tank equipped with a flamethrower and repeating canon that forces you to play perfectly if you’re going to have any chance of surviving this gauntlet. It’s about as rough as 8-bit battles get.

While the arcade version of Mr. Big is more difficult than the NES version of NARC‘s final boss (and you can cheese this fight with the help of a second player or extra controller), it’s hard to deny that trying to defeat Mr. Big by yourself in any version of this game is one of the most infuriating challenges you can embark upon.

This boss is capable of using his various weapons to essentially cover the screen in instant death projectiles. His generally erratic nature along with the size and variety of his attacks makes it just shy of impossible to go toe-to-toe with this foe without depending on what essentially amounts to cheat codes.

While The Legend of Zelda has benefited from some truly incredible boss battles throughout the years, few of the franchise’s fights have proven to be anywhere near as challenging as this battle against Shadow Link in what is generally considered to be the black sheep entry in the series.

Shadow Link’s ability to mimic your movements and attacks makes him one of the most uniquely challenging enemies in this game as well as in the history of the Zelda franchise. It’s an incredibly erratic encounter that most players won’t stand a chance of beating unless they take advantage of a particularly useful glitch.

Anyone unfortunate enough to play Teenage Mutant Ninja Turtles for the NES can tell you how difficult it is, but few people know the misery of trying to face off against the technological terror known simply as the Technodrome.

If you want to know what it’s like to battle the Technodrome, try to imagine just about every common NES deathtrap coming at you at once. This thing affords you almost no breathing room and then fills what little air remains with foes that it quite literally throws at you like rotten tomatoes. Unlike some of the bosses on this list, there’s really no easy way to cheat the Technodrome. You just have to get very, very good.

Yellow Devil is a funny kind of boss. If you know its patterns (or if you’re willing to cheat), you might be able to beat it with relatively little trouble. However, if you dare to make even the tiniest mistake, you’ll soon find that this boss is capable of killing you with a speed that can only be described as upsetting.

What makes this fight so frustrating is that it asks you to rely on platforming abilities that you may or may not actually have at this point. Shooting enemies in a Mega Man game is one thing, but being asked to dodge moving platforms that can kill you in a near-instant while finding a small window to shoot at an enemy is quite another matter entirely.

There are certainly a few Ninja Gaiden boss fights worthy of a spot on this particular list, but few fights in this franchise’s history are as frustrating as the battle against Jaquio at the end of the very first Ninja Gaiden game.

This multi-stage boss fight forces you to master this game’s complicated movement mechanics and learn to love the absolute smallest windows of timing. It’s bad enough that you have to dodge so many attacks during this battle, but what will really set you off is the way that this fight forces you to sneak in attacks during nearly non-existent moments to breathe. Oh, and don’t dare die during this multi-phase boss fight unless you want to start the whole stage over.

Batman is another one of those notoriously difficult NES games that manages to peak with a final boss fight that somehow makes the rest of the game feel almost reasonable by comparison.

I’ve seen a few different strategies for this infuriating boss fight, but nearly all of them require you to be pretty much perfect with your defensive and offensive timings. I’m genuinely amazed by the fact that this boss can technically be beaten despite his complimentary styles of attacks that make what was a safe space in one moment the absolute worst place to be the next moment.

Many of the hardest NES boss fights ever require you to live and work in a razor-thin safe zone where even some of the most dangerous digital creations ever programmed can’t hurt you. Well, few safe zones ever programmed are quite as thin as the one you’ll need to learn to love if you want to beat Dracula in Castlevania 3.

Dracula’s first form is tough enough to kill most NES gamers before they even realize what’s happening, but it’s the fact that you have to find a way to kill all three of his increasingly difficult forms in one perfect run that makes this an absolute nightmare of a final encounter. The amount of mistakes you have to avoid in order to actually beat Dracula is simply ridiculous.

It somehow feels “right” that Mike Tyson tops this list ahead of Dracula, The Joker, and various mythological monsters considering that the former Heavyweight Champion was indeed the baddest man on the planet at the time of Punch-Out!’s release and one of the few fighters ever who brought true final boss energy to the ring.

There’s no real “trick” to beating Mike Tyson. In order to overcome one of the toughest bosses in Nintendo history, you’ll need to memorize his complex pattern and perfectly execute a complex series of dodges and punches that will leave you feeling like you just went 15 rounds with the actual Mike Tyson.

There’s a purity to this one-on-one battle and the way it emphasizes the arcade-like nature of this era of difficult games that elevates it above nearly every other NES boss fight.