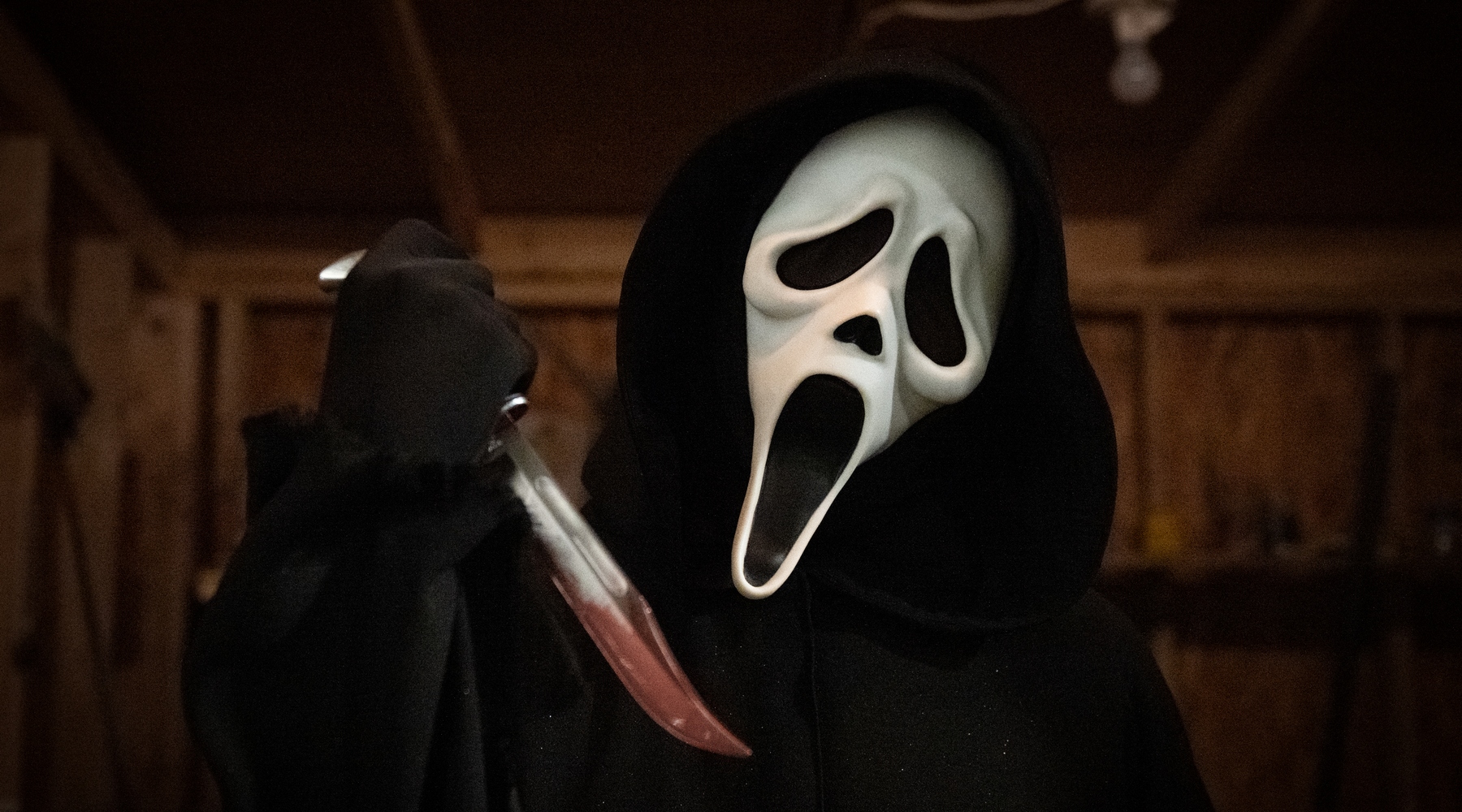 “What’s your favorite scary movie?” an all-too-familiar voice (deployed once again by series stalwart Roger L. Jackson) intones on the phone to Tara Carpenter (Jenna Ortega), who’s cooking up some food in her kitchen when she picks up the ringing landline. But in a twist, Tara doesn’t rattle off “The Shining,” “Halloween,” or even “Stab,” the successful but now aging horror franchise based on the long string of murders in her own town of Woodsboro. No, Tara is a fan of “The Babadook,” “It Follows” and other examples of, she sniffs down the line, “elevated horror.”

A quarter century ago, Wes Craven’s original “Scream” might have been called “elevated horror” for its sly combination of slasher mayhem, genuine suspense and black comedy, not to mention its masterful running commentary on the horror genre and its tropes, delivered by the cast members themselves. And yet even back then, the success of “Scream” led to it being cannibalized into first one sequel, then a trilogy, then a fourth film a decade later, and now a fifth, another 10 years after “Scream 4.”

Much has changed in the horror genre since then, including the arrival of so-called “elevated horror” (which has always actually been there, even back in the day of the first “Scream”), the parallel concepts of reboots and legacy sequels, and the rise of toxic fandom. All these developments are dutifully addressed in “Scream,” the fifth entry in the series and the first not directed by Craven, who passed away in 2015.

Taking over behind the camera are Matt Bettinelli-Olpin and Tyler Gillett from the filmmaking collective known as Radio Silence, who delivered 2019’s witty and delightfully grisly “Ready or Not.” That film’s light touch would seem to make Bettinelli-Olpin and Gillett prime candidates to helm a “Scream” movie, but while they provide a few tweaks and twists on the material, their jump scare-heavy direction of the script by James Vanderbilt and Guy Busick is dutiful to the franchise formula to a fault, determined to elicit a few squeals of delight from well-serviced diehard fans but not much from the rest of us.

In one unusual move, the opening scene’s Tara survives her encounter with Ghostface, which draws her estranged older sister Sam (Melissa Barrera) back to town after several years, new boyfriend Richie (Jack Quaid) lovingly in tow and dark family secrets hanging over her head. Of course, all of them — including Tara’s local friends — know the history of Ghostface and the various killers that have inhabited the costume over the course of 25 years, but none of them seem particularly surprised that the Munch-masked murderer is back on the scene; they just need a refresher on the horror movie rules.

That handily comes from good old Dewey Riley (David Arquette), who’s remained in town all these years although his life has changed considerably. Arquette is perhaps the best part of this film, playing a man whose life has taken a turn toward irrelevance and who must admit to himself that he was born to do battle over and over with Ghostface. Arquette is as quirky as ever, but there’s an added poignancy to the role now that makes him a standout.

Of course, he warns both Sidney Prescott (Neve Campbell) and Gail Weathers (Courteney Cox), both of whom have left town — and in Gail’s case, left her marriage to Dewey — in the decade since “Scream 4” to stay the hell away. And if the news of their breakup counts as a spoiler, well, that’s the only one you’ll get from this point on, aside from the fact that both Sidney and Gail will eventually show up as well for another confrontation with whoever’s donned the cowl this time.

There is some suspense for a while about who’s doing the Ghostface thing this time out, but those viewers with sharp eyes and ears should be able to figure it out pretty early on. That’s really the big problem with “Scream”: there’s a sense of going through the motions this time out, and even the trying-to-be-smart cultural and genre observations feel more forced than usual.

Bettinelli-Olpin and Gillett add the expected heavy gore to the whole thing — this may be the most viciously violent entry in the series — and try to amp up the tension with a constant stream of fake scares, but they run out of ideas early on: there are so many shots of Ghostface either popping up behind a victim or emerging from behind a closing door or cabinet that one begins to wonder if the directors are actually parodying those shopworn moves (to be fair, in at least one scene, which takes place in and around a well-lit, sunny kitchen, that seems to be the case).

Arquette is a welcome presence, as mentioned above, as are Campbell and Weathers, but they’re not nearly as essential to the plot this time as, say, a couple of veteran webslingers who show up in a recently released superhero movie. The rest of the cast features a mix of both lesser known supporting “Scream” characters and new faces, many of which don’t survive, but the newbies in particular don’t make much of a lasting impression once the credits start rolling (and once they start, you can leave — no bonus scenes or table-setters for “Scream 6” attached to the end of this one).

It’s hard to truly dislike the new “Scream.” Even after telling the joke successfully in the 1996 original, Craven, screenwriter Kevin Williamson (and others), and a game rotation of actors managed to keep the sense of fun going through the next three movies, riffing on different aspects of horror, pop culture and celebrity status while still providing a compelling, sometimes scary narrative. There are flashes of that in 2022’s “Scream,” and the directors do manage to balance the film’s multiple tones nicely enough.

As with recent legacy disappointments like “Halloween Kills” and “The Rise of Skywalker,” however, the movie seems more interested in fan service for its own sake than in truly mocking it as it might have once done. What was once subversive and meta is…still meta, but much more rote. It might have been elevated once, a long time ago, but now if we had to choose between “Scream” and, say, “The Babadook,” we know which one we’ll watch.