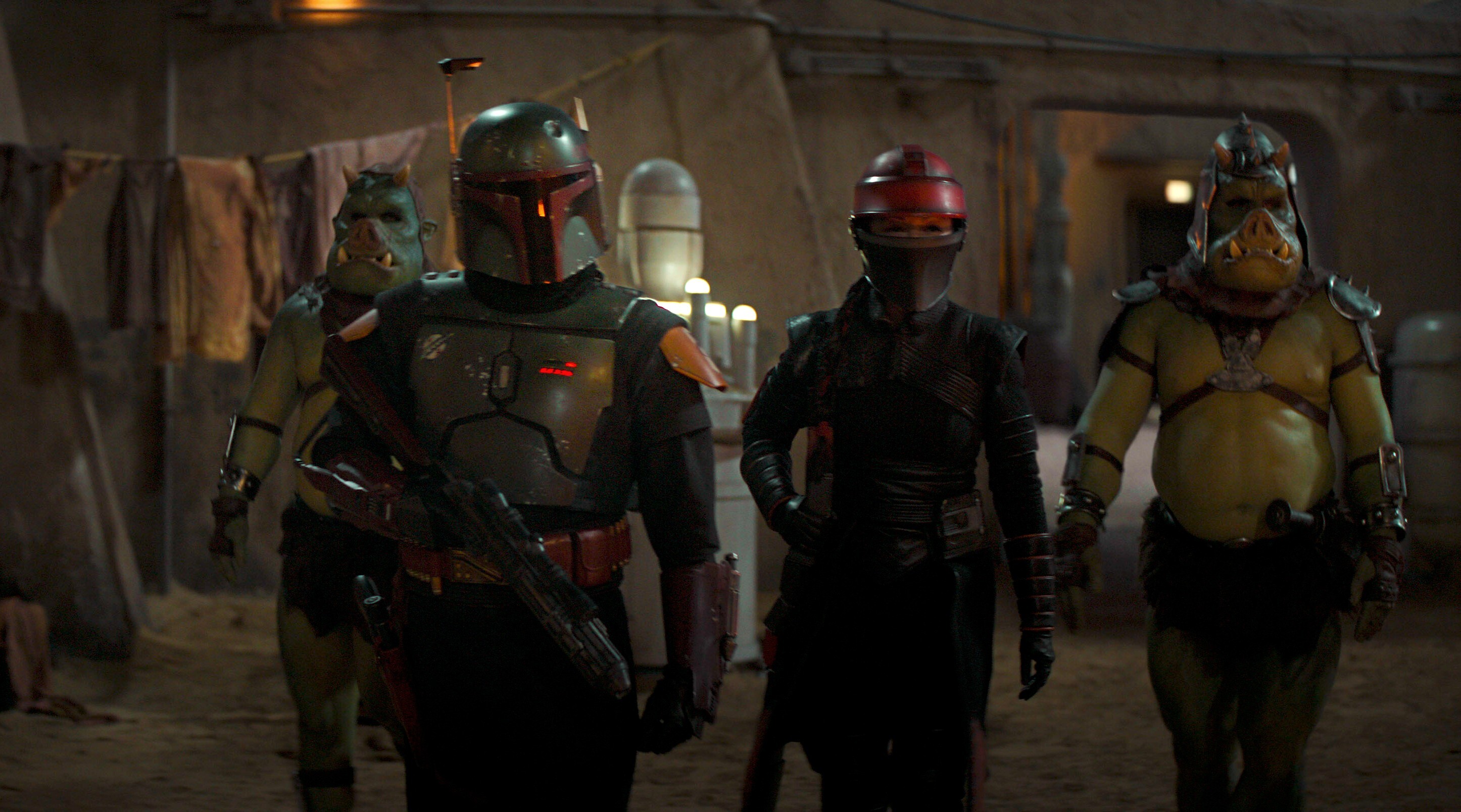 The Book of Boba Fett Episode 3

One of the most wonderful things about Star Wars is the ability to imagine day-to-day life in that world. On Tatooine, it’s clear mundane life might include buying water and looking out for raiders (Tusken or otherwise) on the horizon. In “The Streets of Mos Espa,” glimpses of relatively urbane Tatooine continue to give the galaxy far, far away the sort of color and texture you can imagine living in. But as Boba Fett‘s attempt to create a power base in Mos Espa’s underworld goes on, the actual events feel more like a shopping list than an adventure with everyday life implied on the side.

Boba still struggles to keep a hold on his criminal territory. When a water monger comes to him with complaints about a biker gang, he discovers the bikers are actually down-on-their luck kids and hires them. A brief return to the flashbacks shows Boba learning to negotiate on behalf of the Tuskens, but ends with a more violent lesson: the tribe slaughtered in revenge. Back in the present, the Wookiee bounty hunter Black Krrsantan attacks while Boba is healing in the bacta tank. Boba and Fennec capture the Wookiee with the help of their npew allies, the bikers. It turns out the Hutt twins sent Krrsantan, but instead of being angry their bounty hunter failed, they’ve learned some news that sends them fleeing back to their own territory. The Pykes are coming in force. The tug-of-war between criminal interests on Tatooine finds its new footing with a big ally on Boba’s side: a young rancor, delivered by the Hutts as acknowledgement that Boba won against Krrsantan.

I really like the concept of an episode that focuses entirely on street-level life, but this one adds little we didn’t already know from the first two episodes. The exposition and dialogue make this even worse. In the opening scene, 8D8 explains the makeup of the criminal factions of Mos Eisley. It’s a mix of information we already know and information it would have been nice to know in the first episode. In particular, the droid explains where each gang has its physical base. It’s clearer by now how power in this city works: three gangs have split control of Mos Espa and the ineffective, corrupt mayor plays along.

Maybe the stiffness of this dialogue could be explained by the fact a droid is speaking it — a shame they’ve put such a funny and charismatic actor like Matt Berry (What We Do in the Shadows) in this role. However, the dialogue throughout the episode is also dull both in terms of the words spoken and the actual meaning. “No one respects you,” the apparently rather brave water monger Lortha Peel (Stephen Root) declares to Boba. 8D8, the water merchant, and the rancor keeper (a fun Danny Trejo cameo) all explain things so straightforwardly that I felt like I was reading a Star Wars encyclopedia. Elsewhere, “That’s a crime,” Boba declares. When the dialogue isn’t redundant (“another opportunity to strike again”), it simply makes me miss Star Wars‘ goofier side characters or speech quirks.

Fennec’s role is still pretty much one-note, too, although Ming-Na Wen continues to play her with steely energy. I love that she grins at the prospect of eating like a king (and the food set out for the crime lords’ dinner is truly appetizing). But while his past with the Tuskens’ mercy backs up why Boba wants to spare as many of his enemies as he can now, her motivation is still pretty obscure. It’s okay, even fun, that she just wants power and luxury. But we’ve seen enough different versions of the conversation where she advocates for killing and Boba advocates for mercy. Aren’t there other themes their partnership could explore?

In addition to the dialogue sounding flat, there are a few odd cases of characters walking awkwardly in and out of scenes at convenient times. How far from Mos Espa is the palace formerly known as Jabba’s? Because Black Krrsantan seems to be walking home. And what was the water monger doing before he overheard the swoop bikers’ conversation with Boba?

The bikers offer up one of the episode’s two big fight scenes. Their costumes looked a bit out of place, more like hipsters than down-on-their-luck street orphans, but it was hard for me to complain about that when the flashy coats were at least one-third of their personalities. Overall I enjoyed the action as the bikers chased down the mayor’s aide, though. With plenty of reaction shots from droids and aliens, and speeders knocking over cargo and water jugs left and right, the chase didn’t feel like it took place on a stage at all. Some CGI shots were more noticeable than others, and the city streets were too crowded for the chase to build up much speed. But it did make Mos Espa feel thoroughly lived in. This version of Tatooine is far from empty and sterile.

Black Krrsantan provides the other major fight scene, dragging Boba out of his bacta tank. I really appreciated how much work must have gone into these costumes. I imagine it’s no small feat to make Wookiee and Gammorean outfits that can look good while handling performers rolling down stairs. The aliens were entirely convincing, but, like in this show in general, even a fight scene that travelled a bit felt oddly static. Black Krrsantan raising electrified brass knuckles or biting Boba’s hand are presented with about equal weight.

Boba clearly hasn’t had time to process the trauma of his latest bacta tank memory. Seeing the Tuskens killed links right back to how abandoned he felt by his father. As an audience member, the slaughter feels forced and unnecessarily cruel. After all the work put into exploring them in episode 2, the Tuskens are all removed off-screen, without ever even having individual names. Even if some of them are to return later in the season, it’s still a dismissal of all of that development last episode. It’s unsatisfying, except as yet another lack of closure in Boba’s life.

I’m beginning to get a bit more on board with the story they’re trying to tell of Boba’s unresolved feelings throughout his own life affecting the way he operates as a crime lord. But it’s a pity that it’s done mostly through repetition of imagery and blunt dialogue. With Boba’s old enemies, the Pykes, coming to town, changes may be afoot in Mos Espa.

Call of Duty Warzone: Best Season 4 Guns and Loadouts
Fortnite: How to Beat Darth Vader and Loot His Lightsaber
Forget Elden Ring 2: Why Sekiro 2 Should Be FromSoftware’s Next Game
Evil Season 3 Gives in to a Sex Demon
Westworld Season 4 Episode 1 Review: The Auguries