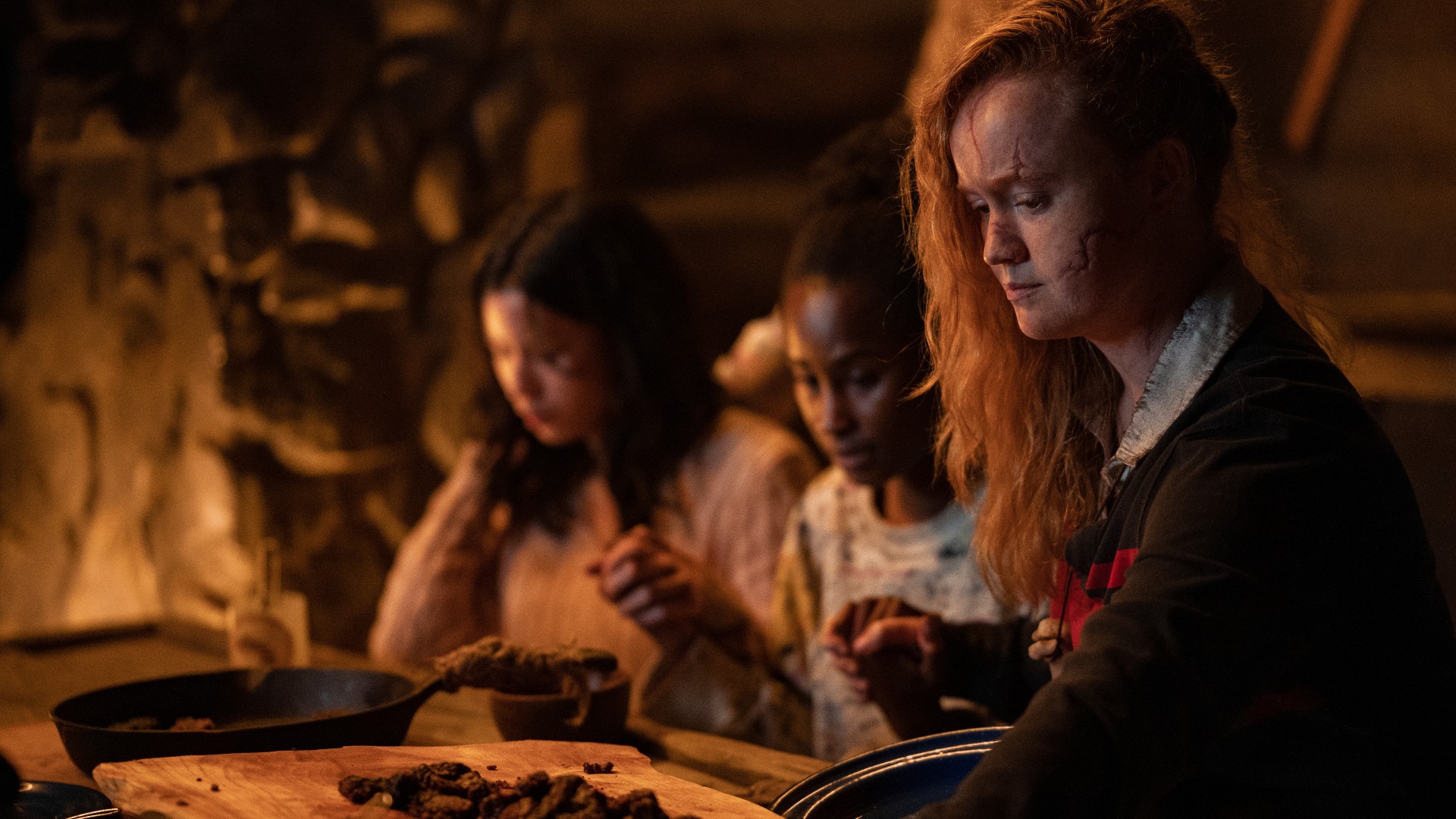 Yellowjackets is, without doubt, one of the best shows we’ve seen in the past year, a series that combines a pair of tense, dual-timeline mysteries with a deft exploration of the dark underbelly of female friendship and the looming threat of cannibalism. (Yes, really.) Boasting a banging soundtrack and a cast full of talented teen newcomers alongside a handful of former 1990s It-Girls returning to pitch-perfect form, everything about this show is straight-up amazing and like almost nothing else on TV right now

The series’ first season is often unbearably tense, teasing its viewers with questions whose answers only seem to spiral into more questions. How many members of the eponymous girls’ soccer team that crashed landed in the Canadian mountains actually lived through their 19-month survivalist hell? What happened to the girls that didn’t? And when did eating their teammates become a thing that they all accepted? Those are only a few of the questions we were all dying to know the answer to heading into the season 1 finale, and while we didn’t find out the answers to all (or even most) of them, it’s hard not to feel like the final episodes of the first season have given us a whole lot to think – and theorize – about while we wait for season 2.

Here’s everything you need to know about what went down in the Yellowjackets season finale and what it might mean going forward.

Who Dies in the Yellowjackets Season 1 Finale?

Though an almost unbearable feeling of dread exists through most of the episode, the only person who officially dies in “Sic Transit Gloria Mundi” is Yellowjackets team captain Jackie.

While this may not move the storyline in the present-day forward much, it does fill in a lot of emotional gaps about why Shauna is the way she is and puts a ton of (admittedly often bizarre) theories about Jackie’s final fate to rest. There’s also real relief – at least for me – in the knowledge that her death was a stupid, tragic accident and that (at least as far as we know) no one actually ate her.

The fates of several other characters are left up in the air during the finale. Travis’ brother Javi has disappeared following the drugged-up events of the girls’ Doomcoming party and is nowhere to be found. In the present day, Misty releases Jessica, the reporter she’d been holding as a prisoner in her basement, with promises of collaboration on a tell-all book. But not before she doctors her cigarettes with what we must assume is a potentially fatal overdose of fentanyl. Jessica blacks out and drives her car into a trash can, but whether she actually died from Misty’s drugs is at the moment unknown.

Oh, and Lottie killed a bear. Apparently with a single stab!

Who is Alive in Yellowjackets’ Present Day Timeline?

Yellowjackets continues to play its cards extremely close to the vest when it comes to revealing who, precisely, made it out of the wilderness alive. Though their (admittedly iconic) group entrance into their high school reunion makes it appear as though Misty, Natalie, Shauna, and Taissa were the only Yellowjackets to return home, we find out by the end of the hour that that isn’t entirely true. Lottie Matthews apparently remains very much with us.

Lottie, she of the burgeoning dark visions and violent animal sacrifice, not only appears to have made it out of the woods, but founded something that feels very much like a cult in the 25 years that have passed since her ordeal. Whether Lottie was truly behind Travis’ death or how exactly she managed to recruit a squadron of goods to kidnap Natalie are questions season 2 will have to answer, but it certainly seems as though we now have a pretty good idea who was sending the other girls postcards decorated with that strange symbol from their Canadian cabin. To what end? We don’t yet know.

What on Earth is Going on With Taissa?

While viewers may have been prepared for a lot of wild twists in the Yellowjackets finale, I’m not sure anyone was ready for the revelations about Taissa. Granted, we knew she’d been sleepwalking and eating dirt and was so concerned about her behavior that she asked her wife and son to leave their home for their own protection. (None of which, for the record, are good things!) But the revelation that she’s built a blood-soaked altar in a basement crevice that includes the decapitated head of the family dog is pretty much next-level disturbing.

Is Taissa aware of what she’s been doing? Does she know she killed their supposedly “missing” pet? And does she believe her blood sacrifice is somehow responsible for her improbable, last minute state senate victory? If so, does that mean she’s likely to keep doing it?

Natalie, who is contemplating suicide, is interrupted by a bunch of strangers in sweats bursting into her hotel room, all of whom sporting medallions emblazoned with that bizarre stick figure image from the group’s time in the woods. She’s dragged out of her room and stuffed in an unmarked van – just as a voicemail confirms one Lottie Matthews was responsible for emptying out Travis’ bank account after his death.

It certainly looks like Lottie sent some of her followers to kidnap Natalie for getting too involved in trying to find out the truth about Travis’ death. But if so, why? Clearly she (and/or her group) are not averse to murder, so why boether to leave her alive at all?

A certain segment of the internet’s dedicated squad of Yellowjackets citizen detectives wanted Adam to have a shocking secret identity. Per these theories, he was everything from a secretly grown-up Javi to Shauna’s woods baby, somehow alive and returned to her (Which, ew? They hooked up, y’all!)

Yet, in the end, it seems as though he was a fairly normal guy, if one who got mixed up in something that eventually went way over his head and ultimately became yet another victim of Shauna’s lingering trauma. But rather than have his identity turn out to be some sort of shocking secret, instead he is more of an emotional symbol – of the escape Shauna was chasing, and the idea that she could ever have a life that wasn’t directly shaped by the crash of Flight 2525.

It seems very likely someone will discover his dismembered body in the park next season though, right?

What Happened to Jackie?

Jackie’s death is the direct result of the events that occurred at Doomcoming, in which Misty accidentally gets everyone high on mushrooms, Shauna and Lottie almost commit a ritualized murder, and Jackie herself sleeps with Natalie’s sort-of boyfriend Travis. (Though technically they may have been on a break?) The girls are furious at Jackie for sleeping with Nat’s man and she’s offended that Shauna has anything to say about this particular turn of events, given that her BFF slept with Jeff, is pregnant with his child, and lied about it all repeatedly to Jackie’s face.

The two girls unload on one another in an argument that’s probably been brewing for years. Shauna calls Jackie weak and useless and insists that she’s the sort of sad-sack whose life has almost certainly peaked in high school. She reveals she never wanted to go to Rutgers in the first place, and basically leads the rest of the Yellowjackets in kicking Jackie out of their cabin. And this decision leads to her sleeping outside during the season’s first snowstorm and freezing to death. Shauna,who seemed to be preparing to forgive her friend, is devastated upon discovering her blue and frozen form.

Boy, thinking back on Shauna’s penitential trips to Jackie’s parents’ house for brunch every year sure does hit differently now that we know she’s one of the – if not the primary – reasons her friend froze to death, huh?

Javi hasn’t been seen since the Doomcoming party – you know, the one where a bunch of the girls almost ritually murdered his brother. Despite Travis and Natalie’s best efforts, no one has been able to locate him, which likely doesn’t mean anything good. Especially since winter has arrived and one night out alone in the elements was enough to freeze Jackie to death.

This being Yellowjackets, that certainly doesn’t mean he died of natural causes – or even that he is, in fact, actually dead – but the odds are certainly not in his favor at this point.

Who is the Antler Queen?

In case you missed the reveal at the end of Season 1’s penultimate episode, “Doomcoming” where she donned her headdress for the first time, Lottie Matthews is the Antler Queen.

She also appears to be busy inspiring cult-like devotion in several members of the Yellowjackets, most notably Lan, who seems to view the token she gave her as a mystical object capable of bestowing life or death protection and Misty, who is basically ready to follow anyone that’s not actively blaming her for giving them all drugs.

Roughly translated, “Sic transit gloria mundi” means “Thus passes the glory of the world”. A phrase that was once commonly used when papal power is transferred from one Pope to the next, perhaps it’s meant to indicate the official rise of Lottie as a mystical power broker of some sort in both timelines. Or someone could have just thought it sounded cool.

Are the Girls Witnessing the Supernatural or Experiencing a Collective Psychotic Break?

This is perhaps the central driving question behind Yellowjackets, and it’s one that season 1 leaves up in the air – in fact, you’d be well within your rights to believe either way at this point.

It certainly seems as though the girls are witnessing some dark, potentially supernatural things in the woods, and the devotion of some to supposed dirt gods and magical tokens is definitely growing. (Lottie’s bear sacrifice, Van’s obsession with wolves, etc.)

Yet, their collective mushroom-induced hallucination certainly makes a compelling case that the stress of their shared trauma may well be messing with their heads in similar and profound ways. (There is, after all, a predominant theory that a similar mass psychological incident is at the heart of the Salem witch panic and it’s also pretty much what happened to the boys in William Golding’s Lord of the Flies, which bears more than a passing resemblance to this story.)

So About That  Whole Cannibalism Thing…

Ten episodes later, and we still don’t know the identity of the girl who was hunted and eaten in Yellowjackets’ very first scene.

Many internet theories insisted that Jackie would turn out to be the girl who was pursued, murdered, and eaten in the Yellowjackets pilot, thanks to the necklace the dead girl was wearing. But with Jackie’s (mercifully much less gruesome) death confirmed before the girls’ ever started hunting one another for sport, the identity of that girl is another mystery that will have to wait for Season 2 to give us answers.

Of course, the question of whether the girls’ decided to use Jackie’s dead body as their first human food source or as an offering of some sort to Lottie’s weird forest gods remains up in the air.

Stranger Things Season 4: Who Dies in Volume 2?
Once Upon A Time Season 7 Episode 22 Review w/ Rose Reynolds | AfterBuzz TV
The Boys Season 3 Has a Different Take on Fatherhood
Best Games to Play While You Wait for God of War Ragnarok
The Magicians Season 4 Episode 1 Review & After Show