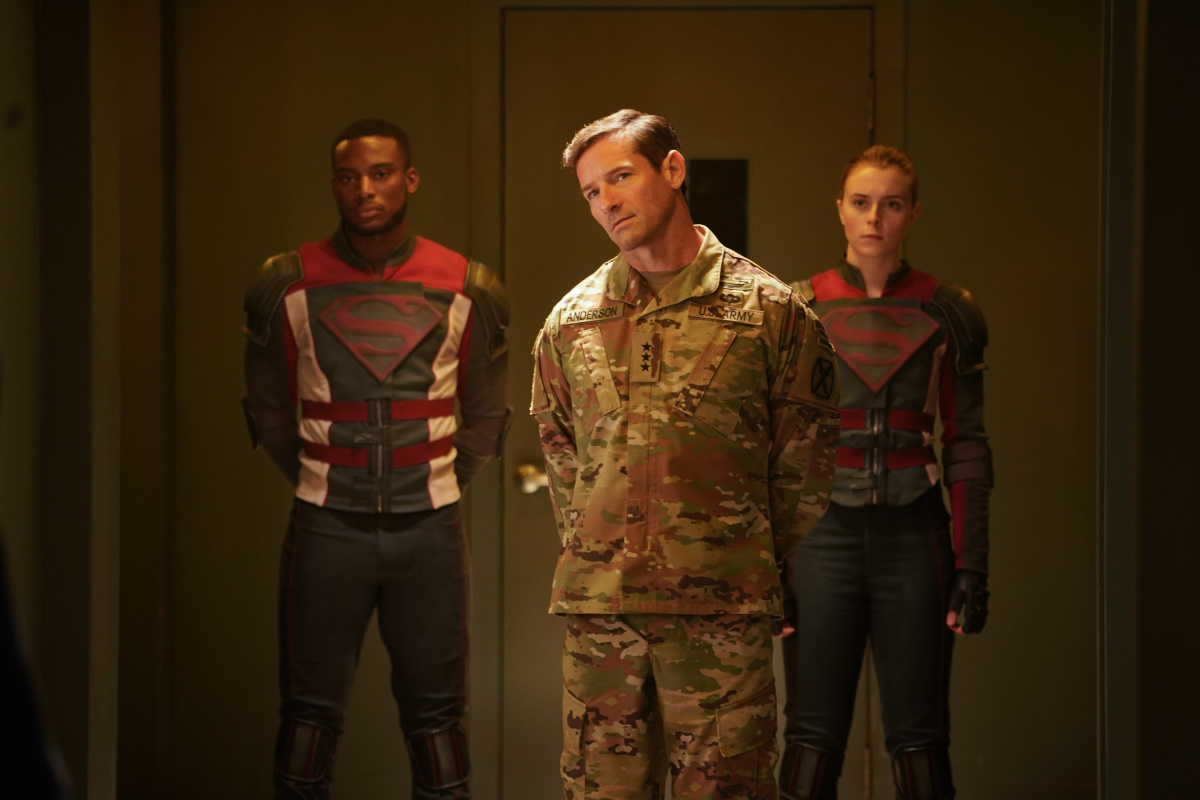 For a show that still manages to do a ton of small town, teen soap, and general family drama in every episode, Superman & Lois still somehow manages to squeeze about two hours worth of Man of Steel lore and DC Comics deep cuts into its one hour timeslot each week. To be clear, this show has been on such a roll that it’s currently doing everything right, with Sarah Cushing’s revelation that she kissed someone while off at summer camp being treated with approximately the same dramatic tension that we’re getting out of the “holy moley, they’re actually doing Doomsday on this show” moments.

And sure, for the time being, it does kind of look like all roads lead to Doomsday. Hell, it’s looked that way since last season, with the introduction of the Eradicator, Tal-Rho’s journey to seemingly becoming the Arrowverse equivalent of the Krypton Man/living personification of the Eradicator itself, John Henry Irons’ continued presence, and much more. But now they’re really going for it, and while we wait for that big reveal to come through, Superman & Lois season 2 is threading the needle with loads of other ’90s Superman comics characters, all of whom help put the bigger picture in focus.

“We have multiple villains this season,” Superman & Lois showrunner Todd Helbing told me recently. “They all sort of start at different times, and they’re not necessarily connected, but then you’ll see how they all start to fall into place with each other.

Let’s take these in order…

Lieutenant Mitch Anderson is based very loosely on a character from DC Comics. And yes, he has a connection to Doomsday. Mitchell Anderson first appeared in 1992’s Justice League America #69, a crossover with the larger Death of Superman story which was used to illustrate how powerful Doomsday was, as he absolutely tore through the Justice League on his way to Metropolis. But one of the houses caught in his path of destruction was young Mitchell’s family home. Mitchell was a troubled teen, who changed his ways after Superman saved him and his family, blaming himself for the Man of Steel’s death at Doomsday’s spiked hands.

But this version of Mitch eventually became a minor superhero, the magnetically powered Outburst, who joined a shortlived super team known as, you guessed it…

The Supermen of America

The Supermen of America as they were in the comics bears little to no resemblance to what we’re seeing on screen at the moment, and that’s just fine. They were a team of superpowered teens who we don’t need to get into here (although I wouldn’t be surprised if some of them end up sharing real names with their comic book counterparts down the road, given how clever this show is with its names). But just as TV Mitch isn’t exactly the kind of guy you would trust to lead a team of superhumans, in the comics, the SoA were formed by none other than Lex Luthor.

Who is Philip Karnowski?

That big goon who hands Supes his ass after huffing some X Kryptonite gas is identified as Philip Karnowski. Real intimidating supervillain handle…unless you go by his comics name of “Barrage.” Barrage wasn’t exactly a big deal in the comics either, but he DID become a member of a team with the rather on-the-nose name of the Superman Revenge Squad, proving that the Supermen of America don’t have a monopoly on subtlety.

But you know who assembled the Superman Revenge Squad? Morgan Edge. Maybe it isn’t a coincidence that Tal-Rho reappears in the same episode where Barrage makes his Arrowverse debut after all.

It’s AmerTek who is mining the X Kryptonite from the Shuster Mines, and they’re a company that has popped up periodically in the Arrowverse over its history. Of course, in the comics, AmerTek was the place John Henry Irons worked before he became Steel, and the weapons he helped manufacture there were a key part of why he decided to go into superheroing. But we’re slightly less interested in AmerTek at the moment than we are in one of their employees…

Assuming that the Dr. Faulkner in charge of the AmerTek mining operation is Dr. Karen Faulkner, well…she might be headed for some action, too. In the comics, Dr. Faulkner becomes the superhuman Rampage (think an orange She-Hulk when Shulkie isn’t in control of herself and practicing law…but with a mohawk…and radioactive). There’s no reason to believe that something like, oh I dunno, an earthquake at the X Kryptonite mine that she’s working at would expose her to enough radiation to give her dangerous, uncontrollable, rage-driven superpowers is there?

Even a name heard on a podcast as the series explores Lois’ arc this season is a tease for a potential villain. Here, it’s Allie Allston, the former leader of a possibly NXIVM style cult, who ensnared Lois’ sister Lucy (who hasn’t been seen in the Arrowverse since Supergirl, but who is due to appear later this year on Superman & Lois) and drove her to a suicide attempt.

In the comics, Alexandra Allston was a new version of the Parasite, able to feed off of energy from a variety of sources, including people and especially Superman. We’ve seen Parasites in the Arrowverse before, so this would be a new one. And there’s of course something delicious about some scam-ass cult leader being a parasite. And since teams seem to be the order of the day, let’s just mention that Alexandra was recruited by Lex Luthor (hmm…him again) to join the Secret Society of Super-Villains for a spell.

There’s a real beauty to the way Superman & Lois is teasing out its Doomsday introduction. In the comics, in the months leading up to the launch of the Death of Superman story proper, the final page of each Superman book would just feature a green-gloved fist, relentlessly pounding away at a metal wall in a mysterious underground bunker, with each issue that wall giving way a little more, and a little more of the spiky flesh beneath the glove becoming visible. We’re basically getting the visual equivalent of that here, and it looks like we’ll finally get the full reveal next week.

But there’s something else going on here, too! It seems that the show is adding a new wrinkle to Doomsday, with the monster seemingly having some kind of psychic link to Superman. Honestly, it was never all that satisfying that Doomsday could simply beat Superman to death, but here, he seems to be channeling something else, and it’s affecting the Man of Steel in debilitating fashion.

My theory on this goes back to Doomsday’s origin story. Doomsday was created as a perfect weapon, an experiment in evolution, and in order for that to happen, he had to be killed over and over again, relentlessly, for decades. Is it possible that Doomsday is “broadcasting” the pain of his existence to Superman with every tremor?

Or, as Lois suspects, is this a case of Superman “feeling” the death of Krypton. But even if that’s the case, if Doomsday was there and survived Krypton’s destruction, the memory of those screams and his own trauma might be what is interfering with Clark’s well being.

Look, it’s a stretch. But is it? Three of the above villains have comic book connections to Luthor, albeit tenuous ones. Maybe this is just me desperately wishing that Jon Cryer’s Lex, who I genuinely consider to be the best, most complete version of the character ever portrayed in live action. Of course I’ll always love Gene Hackman’s Lex, but Cryer is the total package. Of course, Lex is currently spending some quality time in the Phantom Zone after the events of the Supergirl series finale, but with the show finally reuniting the Lane sisters later this season, it seems logical that we’ll start getting some more of the Superman supporting characters from that show making appearances here down the line.

And to be certain, when I mentioned this to Helbing way back in August, he didn’t exactly give a committed answer, but he didn’t rule it out, either!

“Look, I think Jon was awesome as Lex, so I’m certainly open to anything,” Helbing told me at the time. “I think we’d have to find the right story where it would work. Lex Luthor is such an iconic character, so it might be a bit, you know what I mean? There are some other characters that we want to explore. If we’re going to make our own stamp here and try to carve out our own story in Superman history, let’s tell some fresh new versions of this.”

What do you think about the potential for all these villains on Superman & Lois season 2? Let us know in the comments!