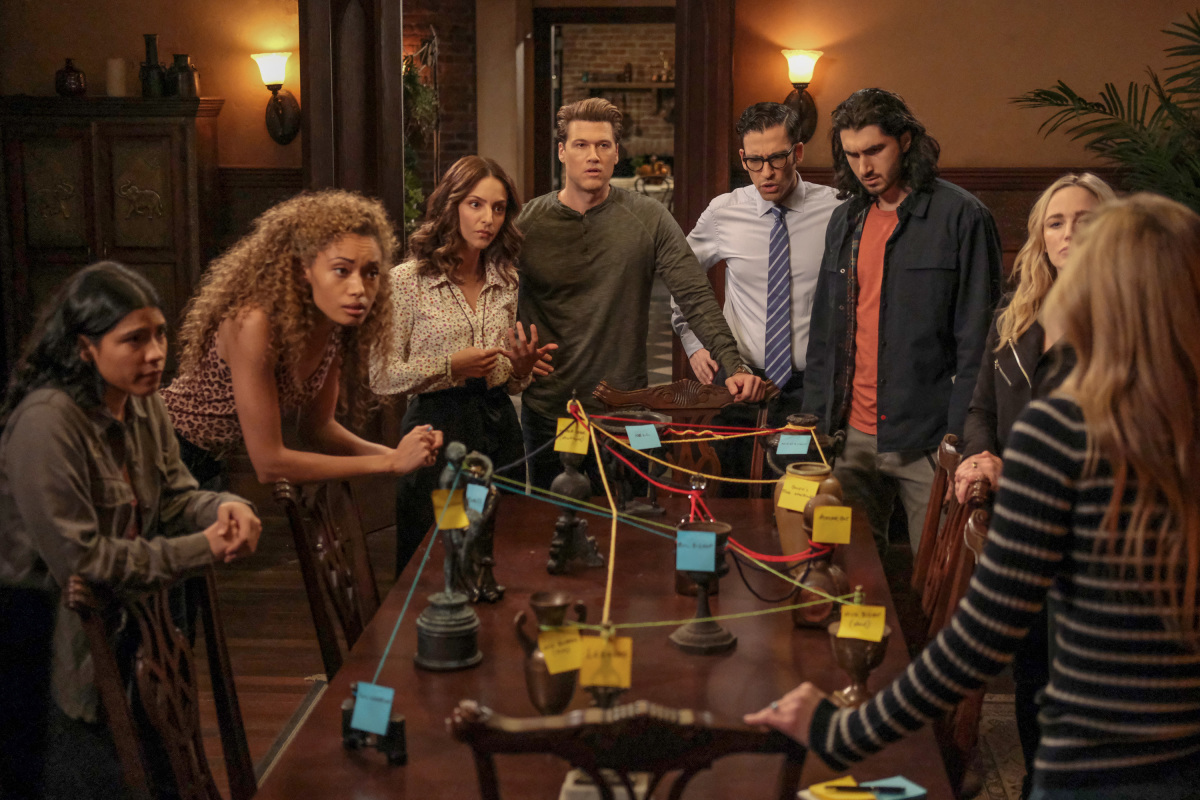 “Lowest Common Demoninator,” the latest episode of DC’s Legends of Tomorrow, is a ringing testament to what this show is capable of doing. The most impressive feat that this show can pull off is to screw around and laugh at itself and everything else for 45 minutes, then hand it over to the character with the least screen time and who is one of the least developed of the regular cast, and have him deliver a quick monologue full of character and emotion that crests his arc for the season so far. That they pulled it off shows how much everything is clicking right now. How they did it is a really nice example of the grasp the cast and crew have on every aspect of Legends.

This is our first episode back from the midseason break for the main cast (as opposed to their cartoonish robot duplicates), so of course they jump right into turning everyone into cartoonish alternate versions of themselves. The crew jumped back to the House of Secrets at the end of the World War II incident two episodes back, and once there they discovered they were in hell and surrounded by a reality show crew that sold their souls for a hit show. So slowly everyone turns into a reality show archetype of themselves.

To me, the reality parodies are both the weakest part of the episode and some of the strongest, but I suspect the weakness stems from my complete revulsion at reality television. I know who some of them were supposed to be (and props to Sara for pointing out that she was a Real Housewife), but I spent a lot of time trying to figure it out and second guessing myself.

At the same time, holy cats was there some funny stuff here. Nate’s descent into Jersey Shore meathead, Spooner’s insane Survivor instincts, Sara shouting “You promised me you would save one inconsequential person and not your entire generation” at Gwyn when he proposed to stop Franz Ferdinand’s assassination to save his boyfriend. But the line of the night and maybe the line of the entire series came just as the crew started to evolve for their show. Gary and Gideon had snuck off to fool around, and Gideon began having second thoughts despite enjoying Gary’s “sweet little bottom.” And as she walked away, Adam Tsekhman crushed another line read: “b…b…but…my bottom.” It might not be as good as “WHERE IS MY NIPPLE?” but it was really funny.

While the reality show antics were hilarious, the meat of the episode came almost entirely from Behrad. We’ve heard about his upbringing before – in the shadow of Zari, he ended up on a reality show with the rest of his family, only to be recast because he was “too boring.” That got rehashed a little as they realized what was happening, but it was also an excuse to sideline B for most of the hour. When he comes into play, though, he runs off with the entire episode.

Behrad explains that he self-medicated because he couldn’t deal with sharing his life with the cameras, that exposing every failure or heartbreak to the whole world was too difficult, so he started not showing anyone anything, and using pot to help cover it up. And he finally confesses his feelings to Astra, furthering the pairing that I never in a million years would have guessed at four episodes ago, but am completely enamored with now. They are just magical together, Shayan Sobhian and Olivia Swann are magnetic.

And that’s the true strength of the show. It’s really fun to watch people who are exceptionally good at their jobs do them well and enjoy the doing, and everyone working on Legends is really good. They have a complete grasp on every character, to the point where the cast can play alternate versions of themselves on consecutive episodes, but slip back to the normal versions in the last quarter of the second one and just soak us in character work. They can do so much with so little space that they’ve got enormous amounts of room to have fun, which only amplifies how entertaining the show is.

Seven and a half seasons in, Legends of Tomorrow is the best it’s ever been. Shows don’t really do this anymore, so I’m going to enjoy every second of it.