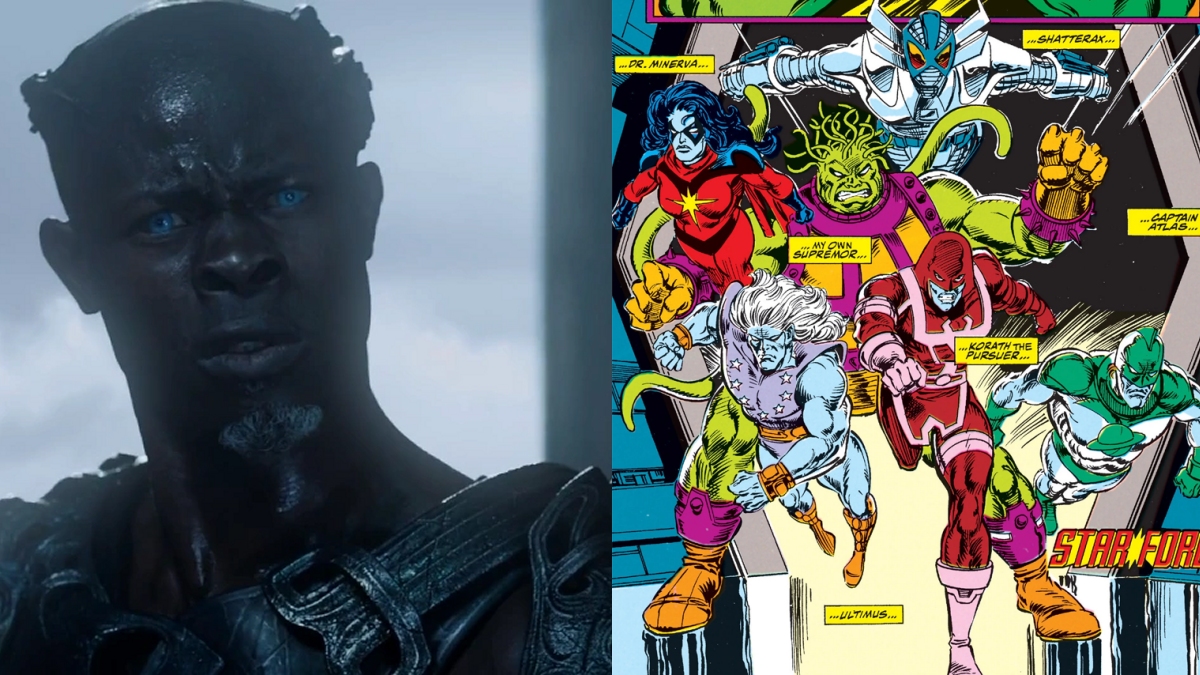 When you think of Marvel fighting games, your mind probably goes to Capcom’s library (everything from their initial X-Men game to the latest Marvel vs. Capcom crossover battle). Or maybe you think about the X-Men: Mutant Academy games Activision used to make. Perhaps the weird one-off that is Marvel Nemesis: Rise of the Imperfects (Johnny Ohm, we hardly knew ye). I highly doubt the first thing you think about is Avengers in Galactic Storm: a one-on-one fighter from Data East with CGI sprites based on a 1990s Avengers storyline that nobody ever talks about.

Now, many of you might remember Data East releasing Captain America and the Avengers back in 1991. The side-scrolling beat ‘em up isn’t the best in its genre, but it does holds up in how well it represents the Avengers. You have your choice between Captain America, Iron Man, Hawkeye, and Vision (white version) as you take on the Red Skull and such villains as Ultron, the Mandarin, and Crossbones. It’s 30 years old, but it feels timeless.

Today, I’m not talking about that Avengers game. I’m talking about Data East’s follow-up, 1995’s fighting game Avengers in Galactic Storm. Overshadowed by better games in its genre, Avengers in Galactic Storm never got its own home console port. It instead became an obscure footnote that did little to stand out. To its credit, it’s the first fighting game to have a team assist function (if you ignore King of Fighters ’94) The graphical style had sprites made from CGI renders that resembled Killer Instinct or Donkey Kong Country, but half as fluid and with less detail.

The game was based on the 1992 Avengers storyline Operation: Galactic Storm, which saw the Avengers defend Earth from a war between the Kree and the Shi’ar. Meanwhile, that same year, Capcom released Marvel Super Heroes: a fighting game based on the 1991 storyline Infinity Gauntlet. Considering Infinity Gauntlet is the basis for two of the biggest money-making movies of all time and Operation: Galactic Storm is the least memorable Marvel comic to be named after a real war, you can figure out who drew the small straw there.

But it isn’t just the source material that separates the two fighters. While Marvel Super Heroes has some oddball choices like Shuma-Gorath and Blackheart, it’s mostly made up of Marvel mainstays: Captain America, Iron Man, Spider-Man, Wolverine, Hulk, Magneto, Dr. Doom, etc. Avengers in Galactic Storm has eight playable characters, an unplayable boss, and eight assist characters. The Avengers’ assist characters are fairly mainstream with Thor, Iron Man, Vision, and Giant-Man (albeit during the time when Clint Barton had the mantle). With the Kree side, you at least have Ronan the Accuser in there as an assist.

In terms of roster, Avengers in Galactic Storm has had people wondering for years, “Outside of Captain America, who the hell are these guys?!” It’s amazing how obscure the roster is. The Kree villains at least make sense in that regard, but the Avengers? Even they are attached to a very specific era of the team.

Yet after all these years of pointing at the bizarre roster, the Marvel Cinematic Universe has done the impossible. They have brought a level of relevance to the characters from Avengers in Galactic Storm! Well, most of them, at least.

Yeah, yeah, there’s nothing much to discuss here. Captain America was already a well-known superhero, though the MCU took his popularity to another level thanks to three solo movies, four Avengers movies, two movies with comedic cameos, and a legacy. It is interesting to compare him to his Marvel Super Heroes counterpart. They share similar attacks, but Capcom was able to add the novelty of making it possible for Cap to lose his shield mid-battle.

Eternals spent several minutes pointing the camera at Dane Whitman, played by Kit Harington. The message they were giving us was that he was absolutely not important, but he totally will be one day. Then in the post-credits, they revealed that he had some kind of mystic sword and a voice belonging to Blade the Vampire Hunter told him to be careful with it.

Soon we will be seeing some cinematic version of Black Knight, who, conveniently enough for the purposes of this discussion, is also one of the heroes from Avengers in Galactic Storm. The game’s depiction is a very specific take on Black Knight from when he had a leather jacket over his armor. It was the 90s, after all.

Fittingly, thanks to Universal Islands of Adventure also being stuck with a 90s aesthetic due to legal reasons, there’s a big picture of Black Knight hanging on the ceiling of the Captain America Diner.

Also wearing a leather jacket – as was the style of the time – was Crystal. The Inhuman princess has the ability to manipulate the elements. As someone who was neither a mutant nor explicitly in the Fantastic Four, Crystal is someone who really could have been Marvel’s breakout female hero if they played their cards right. She was, for a time, the go-to Inhuman character to interact with other corners of Marvel. Hence her Avengers membership during this time.

Unfortunately, while Crystal is part of the MCU, it’s the part that nobody likes to talk about. She was played by Isabelle Cornish in the ill-fated Inhumans TV series. I’m not saying the one-season series was a failure, but word is that if you whisper its name on Disney property, you will be grabbed by goons and thrown into a dungeon.

Then again, Crystal could potentially make a comeback if the MCU’s attempt at the Fantastic Four works out. Johnny Storm is one of the few romantic interests she has who hasn’t been killed off by this point.

As superheroes tend to be temporarily replaced with someone else for a year or so to shake things up, Eric Masters replaced Donald Blake as Thor’s human identity. He’s mostly remembered for standing in during Infinity Gauntlet. Once Thor went back to normal, Eric Masters got his own grittier, extreme Thor knockoff form called Thunderstrike. As Thor’s Luigi, he joined the Avengers for a time and, you guessed it, wore a leather jacket.

On one hand, Eric Masters probably won’t be showing up in the MCU any time soon. On the other hand, leaked images on the set of Thor: Love and Thunder show the God of Thunder as a member of the Guardians of the Galaxy. As he tries to fit in, he’s wearing a very deliberate red leather jacket sans sleeves, giving us a visual that is close enough to the MCU version of Thunderstrike!

The Kree Supreme Intelligence, is the alien race’s version of Zordon from Power Rangers. It’s a blobby face in a giant tube who constantly delivers exposition about their genetics and how they work as a plot point to whatever space epic is going on. A very bewildering choice for a fighting game character, Supremor is an android/clone body that the Supreme Intelligence uses for fighting.

The Supreme Intelligence does exist in the MCU, but we’ve never seen its true form. For us, we only know it as the AI that mentally appears to Captain Marvel in the form of Annette Bening’s Dr. Wendy Lawson/Mar-Vell. So remember, if you select Supremor and use your head tentacles to strangle Captain America, you’re actually kicking America’s Ass with the mom from American Beauty.

In the comics, Minn-Erva was a recurring villain for the original Captain Marvel. Once that guy’s series ended and he was killed off, Doctor Minerva faded into obscurity until 12 years later when she was brought back for Operation: Galactic Storm. Once that storyline finished, she made a couple of appearances here and there before vanishing for 20 years. So once again, to keep the male-to-female ratio from being too much, this game used a character who went two decades without so much of a mention in the comics.

Minn-Erva showed up in Captain Marvel as part of the Kree army. You might remember her as the one who talks up how much of a craphole Earth is. The blue-skinned soldier didn’t get to do much and was ultimately shot down and killed by Maria Rambeau in the third act. At least her actress Gemma Chan was able to raise her hand and ask the studio, “Can I play someone else now? That barely counted as a performance.”

Here it is. In a video game where you play as random Avengers characters, the fact that one of them would be reimagined for the big screen in the form of a man who is mainly remembered for saying, “Who?” is somehow the greatest punchline of them all.

Yes, this Juggernaut cosplayer in rocket boots is that guy from Guardians of the Galaxy and Captain Marvel played by Djimon Hounsou. We still haven’t seen the Punisher of any of the Fantastic Four in a fighting game, but we have the T’Challa Star-Lord fanboy. In fact, Korath got to be playable in a fighting game earlier than Thor, Gambit, Venom, Black Panther, Black Widow, Dr. Strange, Cable, and Deadpool.

Lastly, we have the cyborg Shatterax and the final boss Galen-Kor. Sad to say, these two haven’t been immortalized with MCU appearances yet. Maybe they’ll pop up in the next Guardians of the Galaxy or The Marvels. Maybe they were hanging out reading magazines in the background of a Jessica Jones episode and I didn’t notice them. I never did watch the third season.

It goes go full circle, at least. Both Shatterax and Galen-Kor made their last comic book appearances during the event Annihilation: Conquest. The same event created the modern version of the Guardians of the Galaxy that we all know and love.

When they look at the roster of characters and ask you, “Who?!” you can look them in the eye, smile, and respond, “Yes. That guy.”

This Forgotten Lord of the Rings Game Should Have Been a Great RPG Franchise
The Walking Dead: The One Big Daryl Change Norman Reedus Asked For
Fate: The Winx Saga – Is Rosalind Telling the Truth About Blood Witches?
Call of Duty Modern Warfare 2: Best Guns and Loadouts
Teen Titans Go! – “The Mask” (clip)