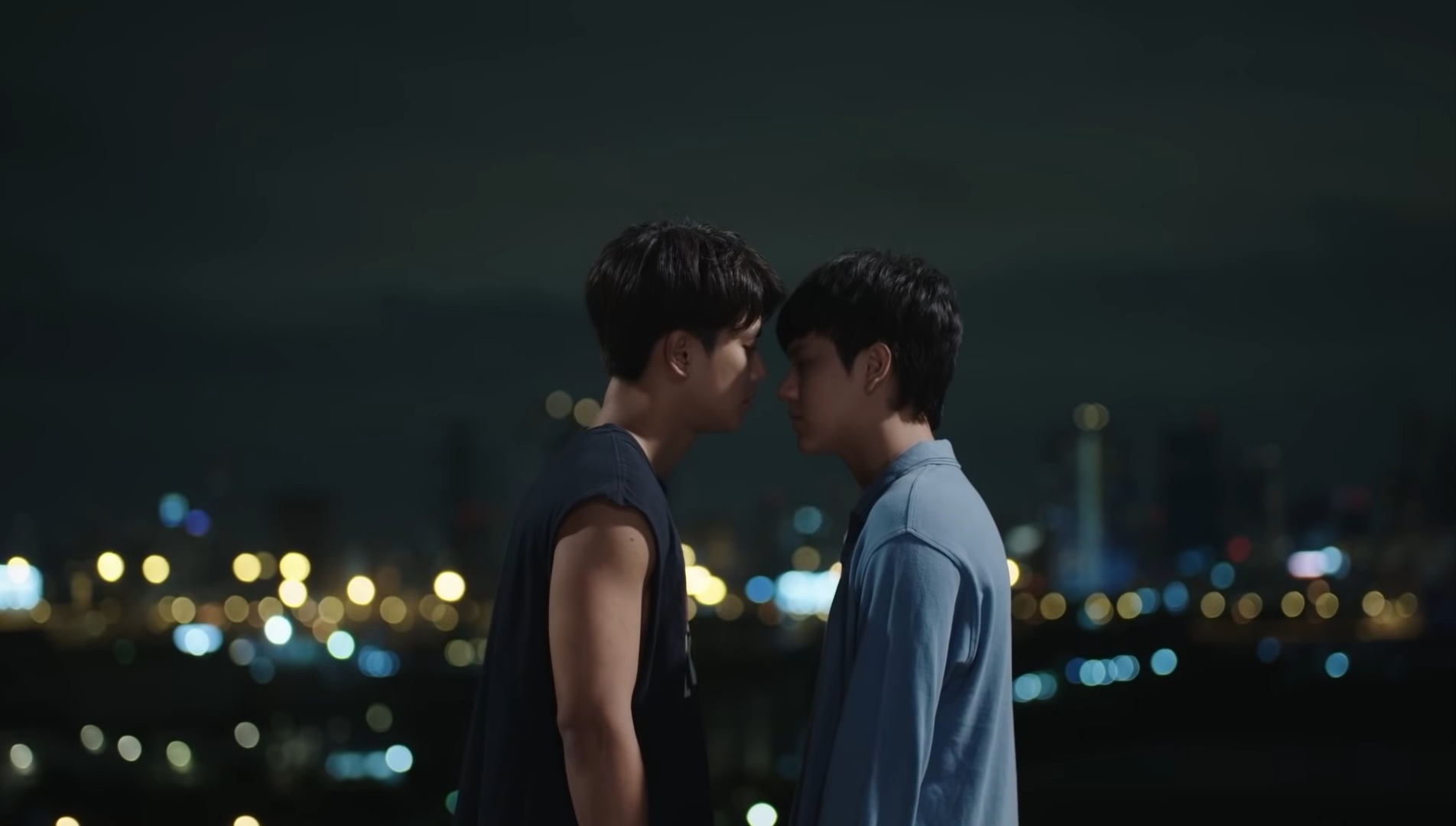 This Bad Buddy article contains some spoilers, though not for the series finale.

Bad Buddy wrapped up its 12-episode tale today. The Thai rom-com about two boys who fall in love in spite of the rivalries between their parents and friend groups, became one of the sweetest stories of late 2021, a beacon of tenderness in a harsh world and a genre-defining example of the increasingly popular Boys’ Love (BL) format. With the dramedy airing its final episode via WeTV and Thai channel GMMTV’s official YouTube channel, let’s take a moment to reflect back on why this show is so damn good and why you might want to consider embracing the rich, transnational world of BL drama.

Bad Buddy begins as fun-loving Pat (Pawat “Ohm” Chittsawangdee) and perfectionist Pran (Korapat “Nanon” Kirdpan) enter their first year of university in Bangkok. Pat is an engineering major, while Pran studies architecture—two faculties traditionally at odds with one another. Unbeknownst to their feuding friend-groups, the animosity between Pran and Pat goes back much further than college and the engineering-architecture rivalry. The two grew up next to one another in an affluent Bangkok suburb, and their families are enemies. Because of this, the two have been pitted against one another since birth, made into competing symbols of their parents’ successes and failures. It’s a lot of pressure, only intensified by the fact that these two can’t keep their hands off one another. In general, the show is an utter delight, with a flexibility in tone that sees the the story expertly shifting from gloriously goofy to devastatingly romantic to just plain devastating in the blink of a frame. (And don’t even get me started on how this show manages to make flirting over product placements like Canon printers and peppermint-scented nasal inhalers so goddamn charming.)

Bad Buddy is situated within the context of Thai BL dramas (known as “Y” in Thailand). BL, short for “Boys’ Love,” is a term that originated in Japanese culture to describe stories (e.g. manga, web novels, TV shows) that feature homoerotic relationships between men. While BL dramas fall under the umbrella of queer media, they are a sub-genre traditionally created by and for (straight) women, though this has never been the whole truth and both the perception and reality of who consumes BL is continuing to evolve as the genre grows. Today, the term “BL” is used in many different cultural contexts, though is most commonly applied to narratives coming from East Asian and Southeast Asian countries, and it is becoming increasingly mainstream and popular. The Thai entertainment industry in particular has embraced the genre. (Even though same-sex marriage is still banned in Thailand.) As the genre becomes more popular in more financially lucrative mediums in which men disproportionately have more opportunities, it is common for men to serve as creators of BL on-screen stories. (Bad Buddy is directed by queer filmmaker Backaof “Aof” Noppharnach, one of the best storytellers working in the Thai BL industry right now.)

While BL fandom is diverse, it does historically skew female, presumably because women are looking for narratives that eliminate the explicit depictions of the power imbalances that come with a constructed gender binary and that we are awash in in our daily lives. Sometimes, this means looking to escape into a world in which women—though not femininity—are removed from the equation. In Boys Love Manga and Beyond: History, Culture, and Community in Japan, academic Rio Otomo writes: “To say the reader disappears in BL may sound negative. But forgetting one’s gendered body, or floating away from a fixed identity, is essentially a liberating concept and, for that reason, it is the core idea of queer theory.”

Why are so many women interested in stories that center men and their romantic relationships? In short, because it is exhausting being a woman in a world that devalues, objectifies, and polices women. When it comes to fantasy, it’s often more pleasurable for us to imagine a relationship in which women do not exist than it is to imagine a relationship that contains both men and women, given the ways that gender has been constructed in our cultures. (“Of course,” notes Otomo, “this reader may not necessarily be a woman but instead a man who has a desire to transform existing social relations, and, hence, is searching for a new utopian vision.”)

Even within the context of BL, Bad Buddy is special. Like any genre, BL has its fair of problematic tropes; Bad Buddy subverts so many of them, making for a stronger, more inclusive story. There is no homophobia in the world of Bad Buddy, with many supporting characters going out of their way to express encouragement of same-sex relationships—even before it becomes known that any of the characters are queer themselves. The challenges the central couple faces in being together never have anything to do with their queerness. In another example of Bad Buddy subverting toxic tropes, both Pran and Pat make it clear that they are not “only gay for each other,” a common trope that can read as bi-erasure or a broader dismissal of queerness. In Bad Buddy, it is made clear that the characters have distinct, queer identities outside of their attraction to and love for one another.

Bad Buddy actively challenges the casual misogyny that seeps into many mainstream stories. At one point in the series, Pran calls Pat out when he makes a gendered joke about their roles as “husband” and “wife.” “Does calling me a wife make you feel superior?” asks Pran, pushing back against Pat’s casual misogyny. “You don’t need to call us husband and wife.”

More broadly, Bad Buddy‘s female characters are depicted as full humans, with complex interior lives of their own. While the series features Ink (Pansa Vosbein), a girl from Pat and Pran’s past is presented as a potential threat to their coming together, in a subversion of the “crazy ex-girlfriend” trope, it’s eventually made clear that the true obstacle is actually the two boys’ unexpressed jealousy and unwillingness to communicate with one another. Ink is not only uninterested in either of them romantically, but is supportive of their relationship. Past that, she has identities and interests outside of her relationships to the male leads. The same can be said for Pran’s mother, Dissaya (Paradee Vongsawad). Though Pat and Pran’s parents are sometimes the antagonists of the story, they are never treated as villains. When the unexpectedly complex secret behind the parents’ long-running feud is revealed, and Pran confronts Dissaya about it, the narrative makes space for Dissaya’s pain and perspective, even while she stands in the way of the central couple.

Another three-dimensional female character comes in the form of Pat’s younger sister, Pa (Pattranite Limpatiyakorn), who represents the other major relationship in Pat’s life. When one of Pran’s friends expresses a romantic interest in Pa, Pat doesn’t fall into the common misogynistic “don’t touch my sister” response, but rather says it is up to his sister, encouraging the boy to go for it. Generally, Pa and Pat’s sibling relationship is one of the healthiest in the show, and a constant source of support and solace for both characters. Without giving too much away, the show also features a “girls love” subplot, less common in BL dramas, that is treated with as much tenderness and romance as the central couple’s story.

If it wasn’t apparent from the examples above, Bad Buddy is artfully constructed. (One climactic scene is soundtracked completely by Thai xylophone.) There are the performances of series stars Nanon and Ohm, who not only have killer chemistry but demonstrate an impressive range in their respective portrayals of two men coming of age while trying to balance their hearts, ambitions, and family pressures. The performances suggest a complete commitment to the material on the parts of the young actors, but also speak to the talent of director Aof, and the rest of his team. Good performances tend to come from the creation of a safe space for actors to be vulnerable and explore, and P’Aof seems to have done that with Bad Buddy.

Bad Buddy scores on visual storytelling too. While the show doesn’t have the budget of the average American TV show, P’Aof makes exquisite use of what he does have—and, by that, I mean: when a scene is emotionally significant, he directs the shit out of it. When Pat and Pran share their first kiss, it is on a Bangkok rooftop. The scene is one of the series’ longer ones, running for six, emotionally heightened minutes as the two finally address the sexual and romantic tension that has been building for five episodes. P’Aof doesn’t rush it (Pat literally sighs 4.5 times before he even approaches the other boy), knowing how important the moment is. As Pat confesses his feelings to Pran, the camera gets tighter on the two performers, and the lights of the city blur into something abstract and distant. For a moment, Pran and Pat are the only two people in the world, leading to a desperate (on Pran’s part) and euphoric (on Pat’s part) kiss that has both characters in tears. It’s one of the most romantic and devastating scenes of TV I have seen in a long time, and it is only the midway point of this story. (Also, Pat is wearing a muscle tee that reads “Baseball Mom,” one of many choice T-shirts for the character throughout the series run, which is just icing on the cake.)

Thai BL, like any other genre, comes with its strengths and weaknesses. As with other genres, it’s not for everyone, nor does it have to be. But, in a global media landscape still ruled by the redundant machismo of Hollywood storytelling, it’s a breath of warm, fresh air—a wonderfully queer story that also happens to be one of the TV’s most romantic shows.

There’s nothing inherently lesser about sentimental storytelling; there’s as much potential for narrative complexity and power in the tears and laughter of melodrama as there is in the violent shadows of grimdark drama. If you’re open to that potential, Bad Buddy‘s tender, joyful, often hilarious tale of two boys coming-of-age in love could be for you.