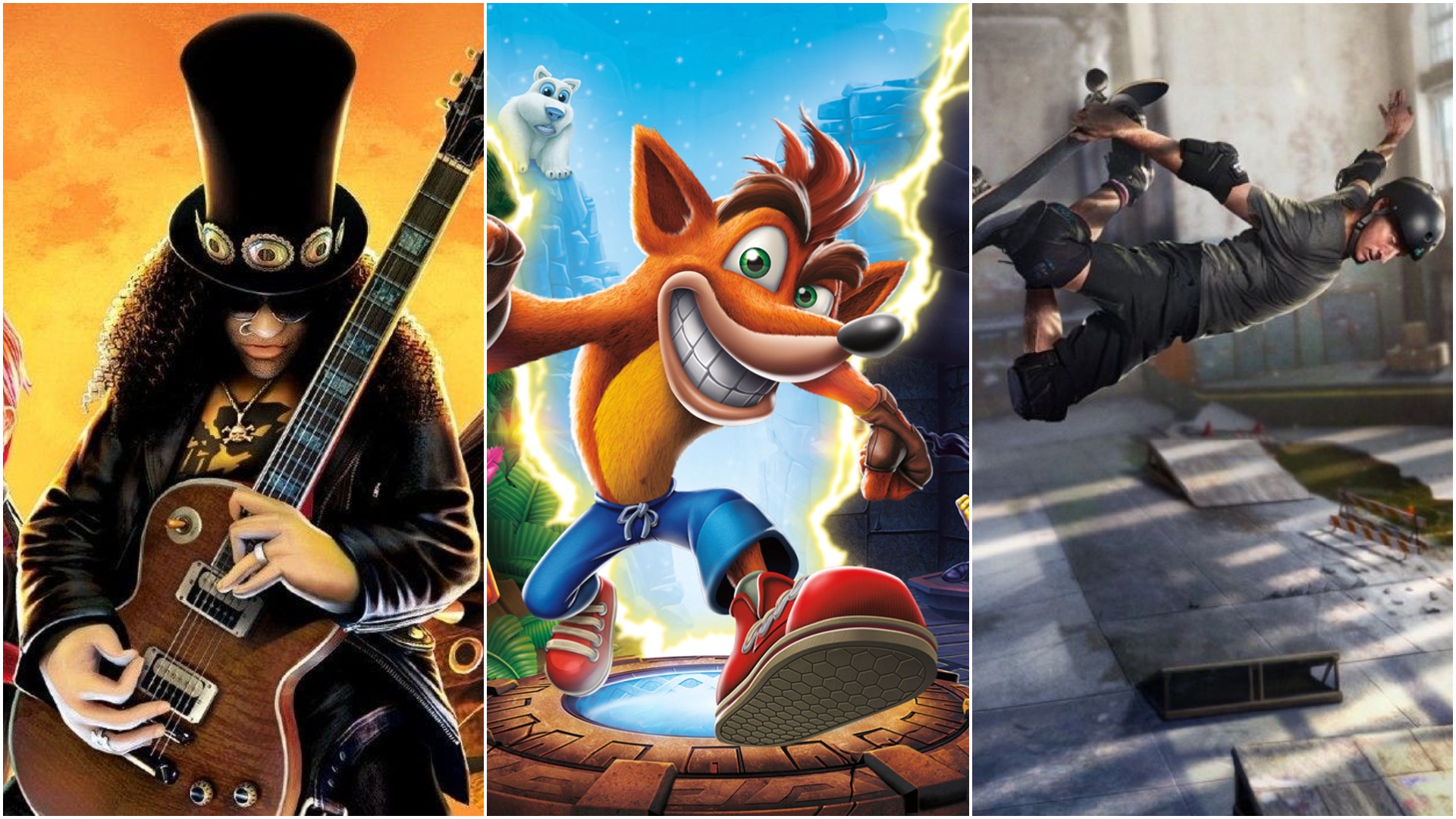 While the news that Microsoft is working to complete a nearly $70 billion acquisition of Activision Blizzard is shocking for reasons that go far beyond what new video games we’re going to get, it’s hard to look at the list of Activision Blizzard properties and not get a little excited about the many dormant franchises the Xbox team could revive.

It might sound like we’re simply dreaming when we suggest that Xbox could do more with the Activision Blizzard library than Activision Blizzard did, but Head of Xbox Phil Spencer’s recent comments about which Activision Blizzard properties he would love to revisit have a lot of people genuinely excited by the idea that Microsoft bought the company for so much more than the rights to the Call of Duty franchise.

While there is no shortage of incredible Activision Blizzard games that Xbox Studios could revive if they choose to do so, these are the 10 series that leave us feeling surprisingly optimistic about the future of this deal.

Phil Spencer isn’t the only person who was quick to talk about Guitar Hero once Microsoft’s acquisition of Activision Blizzard was made public. Even before the news broke, it felt like more and more gamers across social media have been wondering what happened to the Guitar Hero franchise, why we aren’t all failing at “Through the Fire and Flames” at this very moment, and whatever happened to all those plastic instruments we used to own.

Reviving the Guitar Hero franchise for the modern age wouldn’t be easy (the series’ downfall can easily be attributed to mass fatigue towards the concept as well as the cost of keeping up with all the new hardware and DLC releases that came with it), but there’s certainly something magical about that series that you have to believe could still work if it was put in the right hands.

While Phil Spencer revealed his age when he got excited about the idea that Microsoft may soon control the future of the Hexen franchise, anyone familiar with the Raven Software shooter series is probably just as excited about the prospect of Hexen making the glorious return it has long been denied.

Hexen‘s blend of medieval melee weaponry and magic made it one of the best “Doom clones” of that particular era, and it’s that same combination of combat concepts that helps the shooter stand out to this day. Simply put, Hexen deserves the same kind of high-end revival that Doom received in 2016.

Speaking of which, it’s worth noting that Microsoft may not only soon own Hexen developer Raven Software but original Hexen publisher (and Doom 2016 developer) id Software as well. The scope of their video game empire truly is impressive.

The success of Tony Hawk’s Pro Skater 1 + 2 seemingly guaranteed that the Tony Hawk franchise would likely be revived in some way, but this new deal may just help ensure that we not only get additional Tony Hawk remakes but a proper new Tony Hawk game as well.

I think that the recent Tony Hawk remake strongly suggests that the best way to make a modern Tony Hawk game is to go back to the franchise’s basics, but I’d honestly love for Tony Hawk’s Pro Skater 1 + 2 developer Vicarious Visions to take a shot at crafting their own kind of Tony Hawk game. Of course, they could always revive the Tony Hawk Underground concept.

Regardless of the specifics, it does feel like the future of the Tony Hawk franchise is in good hands.

While Microsoft is undoubtedly happy that they will soon control World of Warcraft (even if that MMO has fallen on hard times as of late), it’s certainly worth noting that may soon also be in their power to revive the Warcraft RTS games as well.

Will they do it? The answer to that question depends on a number of factors, but it’s certainly worth noting that Warcraft 3 Reforged‘s failures can reportedly be attributed to a lack of support and resources, so Microsoft’s willingness to give a hypothetical Warcraft 4 team that support and those resources could go a long way to actually making that seemingly dead project a reality.

Granted, this is still obviously a bit of a stretch, but if Microsoft finally made Age of Empires 4 happen, then why not Warcraft 4?

If Microsoft is willing to do something really crazy like let Blizzard make more than just a few games that are really just microtransaction machines, then they could find a reason to revive The Lost Vikings.

The Lost Vikings‘ fascinating blend of side-scrolling platformer gameplay and puzzles made it one of the most unique games of its era, and I honestly think that format would lend itself well to the kind of couch co-op experience the Xbox team is always looking to add to Game Pass.

Even if they do want Blizzard to focus on other things, I’m sure that there are other studios in the Xbox family that would love to take a shot at this concept.

While Pitfall probably isn’t one of the Activision Blizzard franchises that jump out at you when you look at a list of the various properties in their library, this could prove to be one of the more sneakily valuable series Microsoft just secured the rights to.

Whether they want to go the “gritty reboot” route or let the Pitfall franchise remain just a little bit silly, the Xbox team may just be able to turn Pitfall into their own Uncharted or Tomb Raider franchise.

Ok, that might be just a bit of a stretch, but there is a fairly sizeable hole in Xbox’s lineup of exclusive action-adventure games that Pitfall could (ironically) help fill if they give this property to the right studio.

It’s tempting to just say “every Sierra game,” drop the mic, and walk away, but for the sake of maintaining the integrity of an internet list, I have to give the nod to the King’s Quest franchise.

Sierra’s King Quest series is considered by many to be the greatest point-and-click adventure franchise ever. While it’s always been a shame that Activision Blizzard spent so many years letting pretty much every Sierra Games property stay dormant, it’s the King’s Quest franchise I find myself missing most when I see other modern adventure titles doing so well.

Bonus points for this one if Microsoft lets Double Fine make a King’s Quest game.

Yes, I’m sadly aware that the Xbox team can’t just decide to make an X-Men game whenever they want, but as long as we’re wishing, a revival of Raven Software’s exceptional ARPG series has to be near the top of my wishlist.

Many have tried, but few ARPG co-op games can match the way that X-Men Legends so brilliantly utilized that genre to deliver not just one of the greatest co-op ARPG experiences in its class but the best X-Men game ever made.

Look, if it comes down to it, I will settle for getting the X-Men Legends games on Game Pass.

I truly believe that a modern studio could cash in big by making a car combat battle royale game, and the Xbox team may soon have the chance to prove me right by resurrecting Interstate ’76.

Interstate ’76 and its spin-offs didn’t exactly set the world on fire (they always lagged somewhere behind the Twisted Metal games in many respects), but there was always a craft and style to the titles that made them so much more than the car combat games you played if you didn’t own a PlayStation.

While this one is probably pretty far down the list of priority franchises, it will be interesting to see if Microsoft decides to do something with it if that rumored Twisted Metal reboot proves to be a hit.

Much like THPS, the creative and commercial success of Vicarious Visions Crash Bandicoot N. Sane Trilogy should have guaranteed a proper Crash Bandicoot revival. Of course, old management usually needed a pretty good reason to release a “mere” single-player game.

Which long-dormant Activision Blizzard properties would you like to see Xbox Studios revive? Let us know in the comments below.