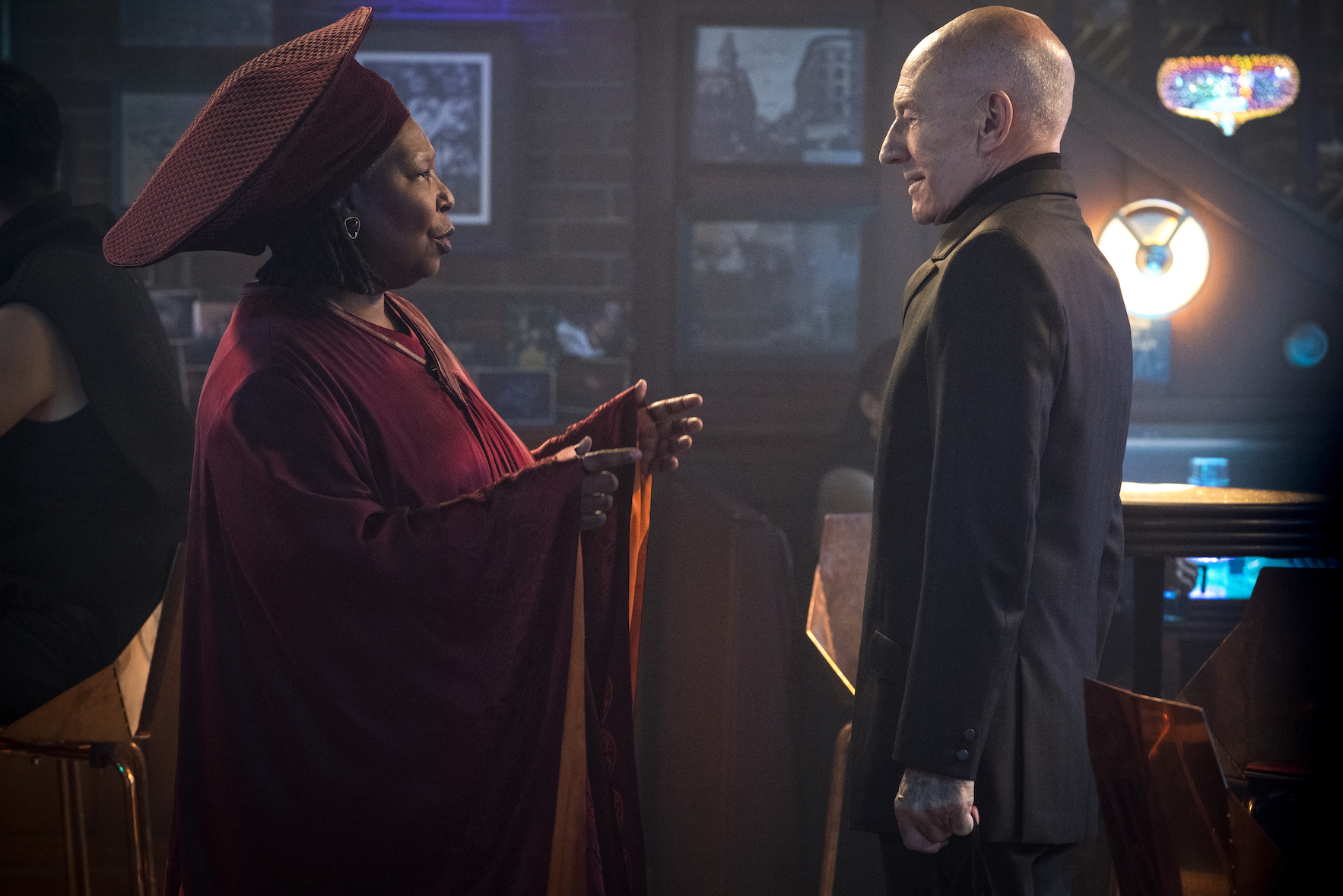 In Star Trek IV: The Voyage Home, Bones (Deforest Kelley) reminds Kirk (William Shatner) — and the audience — about how the crew of the classic Enterprise has traveled back in time before. “Sure, slingshot around the sun. If you pick up enough speed you’re in time-warp. If you don’t, you’re fried.” And now in Star Trek: Picard Season 2, this classic, and wonderfully suspenseful version of time travel is finally back. No Guardian of Forever. No time crystals. Just slingshotting around the sun like a bunch of maniacs. Here’s what that means and why it’s awesome…

The new trailer for Picard Season 2 finally reveals that Whoopi Goldberg has returned to the Trek pantheon as the timeless and perpetually wise Guinan. Instead of tending bar on the USS Enterprise-D, she’s now set up on shop on an alternate version of Earth. And, from the looks of this trailer, it’s Guinan who encourages Picard and the crew of the La Sirena to head back to Los Angeles, Earth in the year 2024.

The trailer also reveals that either Vulcans or Romulans mind-meld with a young human boy, at some point in the past. (Could this be young Jean-Luc or one of his ancestors?) We also see Q (John de Lancie) with Brent Spiner in 2024. Previously, Spiner confirmed his new Picard Season 2 character is a member of the Soong family, but not one we’ve seen before. So, Q is time traveling with his Q powers. Romulans (or Vulcans) are time-traveling somehow, and the Borg Queen is in the mix, too, who, we know, also has time travel abilities.. In the 2021 Star Trek Day Picard trailer, Jean-Luc said “there are other ways of traveling in time,” which revealed the Borg Queen. This suggested that maybe Raffi, Seven, Jurati, Elnor, Rios, Picard, and (maybe?) Soji were using Borg tech to travel in time, but the new trailer makes it seem like they’re going a bit more classic route.

In several shots in the new Picard Season 2 trailer, we see the La Sirena — and maybe one other starship — very clearly flying around the sun. In those moments, the close-ups on Jean-Luc seem to suggest that this is the same time warp technique used by the TOS crew three times: In the TOS episodes “Tomorrow is Yesterday,” “Assignment: Earth,” and, of course, famously, in the 1986 film The Voyage Home. And, similar to The Voyage Home, the story of Star Trek: Picard season 2 is taking the crew back to a time in Earth’s past that is fairly contemporary with the time of the release. Yes, 2024 is a few years in our future, but pretty close to our own time, just as The Voyage Home hit up 1986.

But, the return of this type of time travel is probably more than just fan service. Like Kirk in The Voyage Home, Picard has to do some time travel off-the-books. From the looks of things in the trailer, the state of the Federation has been utterly altered by something that’s happened in 2024, and possibly, at other points in the timeline, too. In this alternate future, it seems like Picard and Seven are working for some sort of twisted version of the Federation, which could indicate they’ll have to go undercover to even in their own time. Although Starfleet briefly sanctioned the slingshot time travel thing in the 23rd Century, as Bones pointed out in The Voyage Home, this isn’t the most reliable or safest version of time travel available. The fact Jean-Luc is using it in Picard proves the gang is desperate.

Still, because the Borg, Q, and Guinan are all in the mix, it’s possible — if not outright likely — that the slingshot time travel trick isn’t the only time travel in play. Because the Picard Season 2 showrunner is 12 Monkeys time travel trickster Terry Matalas, putting your chips on more than one style of time travel is a pretty good bet.