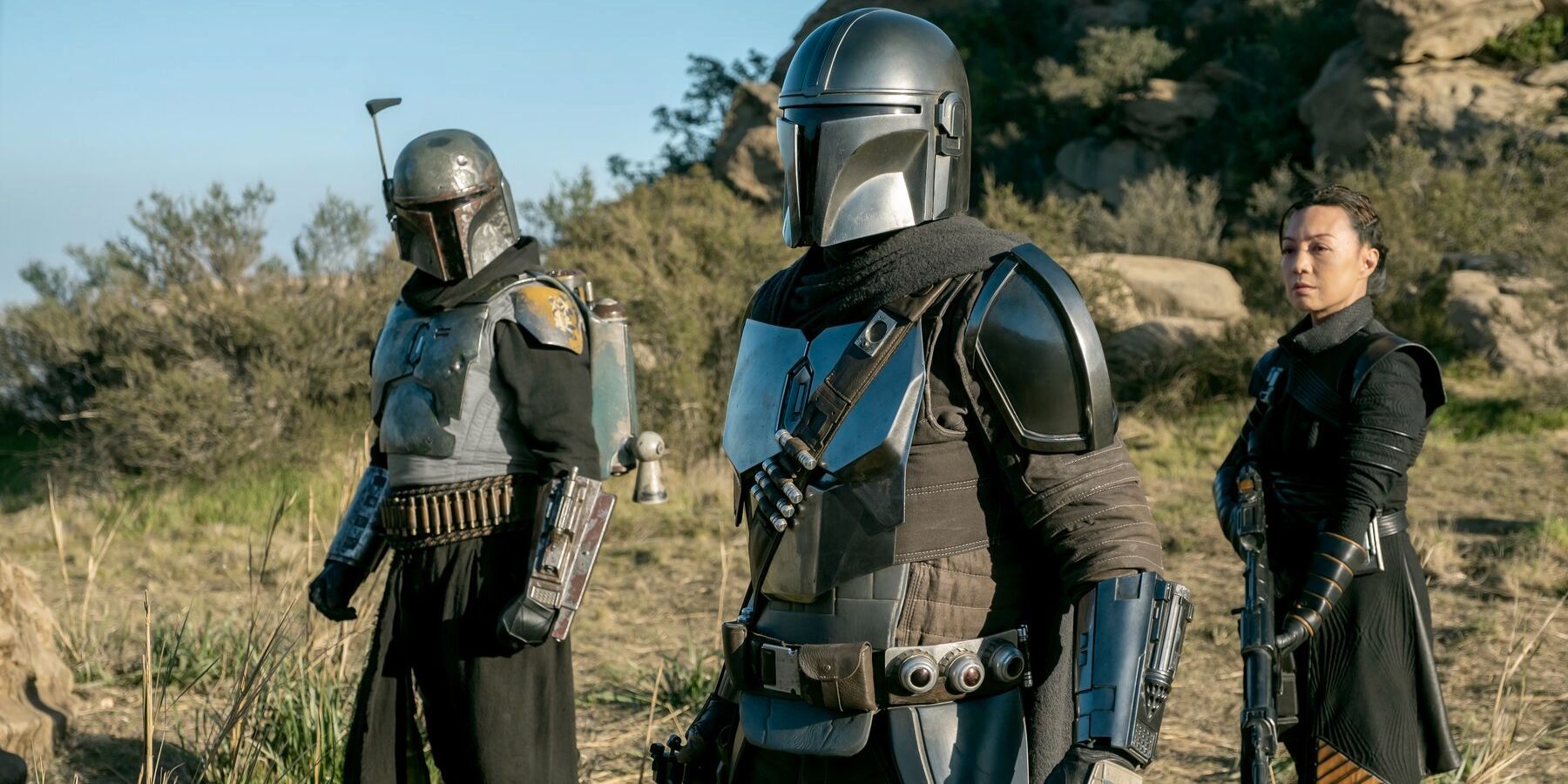 This Star Wars article contains spoilers for The Book of Boba Fett and The Mandalorian.

After struggling through four very slow-paced episodes in which not much of note happened at all, The Book of Boba Fett has finally delivered a chapter that demands attention. “Return of the Mandalorian” is exciting, spectacularly shot, and takes us to new places we’ve never been to before, including a very cool ringworld called Glavis. Most importantly, it pushes the the story of the post-Return of the Jedi era of Star Wars forward.

The only problem is that the episode doesn’t contain a single second of Boba Fett, who I assume is back in his bacta tank reminiscing about how he acquired a bacta tank. Instead, it’s Din Djarin who gets the starring role in the show’s best installment. With Din comes the return of actual stakes, interesting pieces of new lore, and even a bit of humor, something the spin-off series has tried and failed at throughout its largely dry run. Somehow, “Return of the Mandalorian” has come from the same writer as the first four episodes, executive producer Jon Favreau, who evidently has way more fun writing about Din than the iconic Star Wars character that inspired him.

Previously, I considered whether the return of Din Djarin could fix what was wrong with The Book of Boba Fett. Until episode five, this seemed like a Star Wars show that wasn’t having much fun existing, as it went through a checklist of lore explainer flashbacks; a roster of side characters that exited the stage almost as soon as they entered it; and endless easter eggs and callbacks meant to feed your nostalgia, surface details that might be enough for some viewers but that don’t actually make for good storytelling.

“Return of the Mandalorian” leans into some of these things, too. We still get a Naboo starfighter zipping through Beggar’s Canyon, both references to The Phantom Menace, and a cute droid that looks like BD-1 from the Jedi: Fallen Order video game shows up to help Peli Motto in her shop. (One also can’t help but notice how lazily convenient it is that Din returns to Tatooine at the exact moment when Boba and Fennec are looking for reinforcements.) The difference is that all of these easter eggs are complementary to the narrative, while in the rest of The Book of Boba Fett, the callbacks seem to be the whole story.

The former bounty hunter now turned crime lord of Mos Espa has been stuck in the past for most of his show, remembering how he escaped the sarlacc, how he lost his armor and ship, how he got them back, and so on — tidbits meant to fill out his backstory, sure, but they come at the expense of anything happening in the present, where the story is supposed to move forward. It feels like there’s about an hour episode’s worth of present-day storytelling across the first four chapters (which run 176 minutes total), as Boba visits the mayor’s office, fights a few henchmen, chats with some Hutts, pets a baby rancor, visits the mayor’s office again, hires some kids to do crimes with him, and has a big mob dinner where nothing of intrigue happens at all.

Is the problem that Boba’s story was over before the show even began? With his armor and ship back, Bib Fortuna lying dead on the palace floor, and Boba sitting on the throne, he seems to have achieved everything he set out to do, even before the title card for The Book of Boba Fett hit our screens. Was the point of the show, then, to just let us know how he got all his cool swag back?

The Book of Boba Fett seems to have forgotten the ways of The Mandalorian. Yes, you can absolutely fill your story to the brim with nostalgia, lore, and interesting backdrops, but you still have to give your protagonists something to do and somewhere meaningful to go. With one crossover episode, the show manages to push Din’s story forward in a big way, while teasing what’s come before without the cumbersome flashbacks.

What happened between Din and Bo-Katan after he won the Darksaber? Well, it can be inferred that they…settled the dispute since Din still carries the weapon and is ready to learn how to master it. The consequences of taking his helmet off to first save Grogu and then bid him farewell? He’s been labeled an “apostate” and exiled from his Mandalorian tribe until he can make a pilgrimage back to Mandalore.

But first he embarks on another quest, one filled with pathos: he wants to find the adopted son he gave away so that he can give him a present, despite the fact that Jedi are supposed to forgo attachments. Din doesn’t care about the Jedi code. He loves Grogu and wants to see him again. That’s captivating and says loads about who Din is, even though we don’t see his face at any point in the episode. It’s this kind of emotional storytelling that has made The Mandalorian such a success and that The Book of Boba Fett has failed to replicate.

There are clear stakes for Din’s story and the episode cleverly plays with them in scenes where the bounty hunter gets injured or falls off a bridge or is challenged to a duel. If something happens to Din — if he dies — it means he never gets to see Grogu again.

If Boba Fett were to die, well, he’d…just be dead again. And maybe Mos Espa would need a new daimyo, although it’s unclear at the moment what power the title bestows on its owner. As Stephen Root’s ballsy water monger says in “The Streets of Mos Espa,” no one really seems to respect Boba Fett as daimyo. Not the other gangs and not the pesky teens on their Vespas.

Even Din puts the crime lord on hold in the final scene of “Return of the Mandalorian,” while he goes off to find his son, a reunion we could see in the next chapter. It would make sense. The character once described as a Boba Fett clone has outshone the old bounty hunter on his very own show. Din might as well take the throne for good.

House of the Dragon’s Own Long Dark Night Re-Introduces a Game of Thrones Issue
House of the Dragon Episode 8 Trailer: The Threat of War Looms
Why Google Stadia Failed and Is Finally Shutting Down
Overwatch 2: How to Unlock Every Hero
The Best Rick Grimes Moments on The Walking Dead