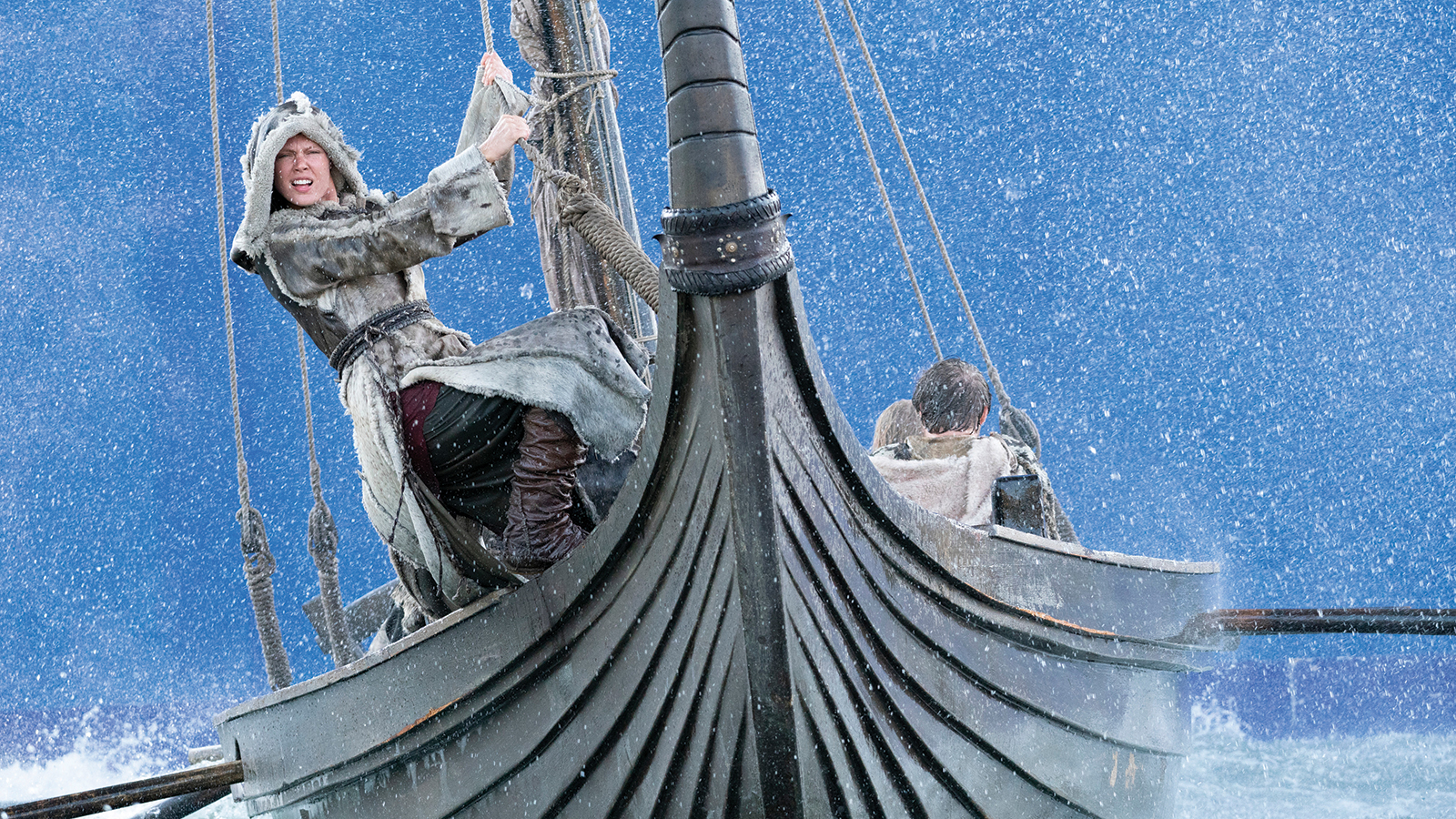 This opening letter is from the Den of Geek x Vikings: Valhalla Special Edition Magazine created in paid partnership with Netflix. You can read the full digital issue here!

On paper, a Vikings spin-off certainly seems like a no-brainer. The original series ran for six seasons and garnered legions of fans thanks to its adventurous storytelling, morally gray characters, cinematic action sequences, and willingness to take risks. The simplest choice would have been to create essentially a carbon copy of the original, leaning into its themes of legacy and explicitly tying the new series to its parent program.

Instead, Netflix has gone in a different direction, setting Vikings: Valhalla 125 years after the original, in a world where names like Ragnar and Lagertha are remembered as mythic figures more than real people who loved and struggled and triumphed.

“We had no desire to do Season 7 of Michael [Hirst]’s show.” Vikings: Valhalla creator Jeb Stuart tells Den of Geek. “I loved everything they did. But I needed to find a place to tell a different story.”

And Valhalla is certainly that. Full of multi-dimensional characters and massive action setpieces, the Netflix series certainly feels like a close relative of the original History Channel drama. But Valhalla is very much its own thing, navigating a deft and nuanced tale about two competing religions and the evolution of a kingdom.

“The one thing I said from the beginning—I couldn’t write an episode of Vikings,” Stuart says. “I wouldn’t know how to do that. And that’s not fair to either Michael or me. It’s like coming in after Gene Rodenberry and saying ‘write another episode of Star Trek.’ This is Next Generation.”

Touting its “fresh” and “accessible” feel, Stuart hopes to attract a Netflix audience that “might not have approached” the original series for whatever reason. But he is equally adamant that fans of the original Vikings will find plenty to love in Valhalla.

“To fans [I’d say], I was a fan. I’m not trying to throw the old show away. It contains the DNA of Vikings. It’s just a different animal. And you should be able to go to the zoo and see a zebra and a horse and say, ‘I can love them both.’”

One of the biggest differences between Vikings and Valhalla is the latter’s sprawling cast. In the original series, all roads generally led back to Ragnar Lothbrok (Travis Fimmel) in some way. And even after he was dead, the story was largely driven by his children. But Valhalla features at least half a dozen major characters, all with competing agendas and stories of their own.

“It’s really an ensemble piece,” Executive Producer Morgan O’Sullivan says. “Sure there are stars in it, but all the characters are equally important. We’re blessed in these characters and the way they’re written.”

Viewers may be surprised to learn that most of the characters they’ll encounter in Vikings: Valhalla were real people. Olaf Haraldsson was a king of Norway and later canonized by the Catholic Church. Canute was King of England for the better part of two decades. Leif Eriksson is widely remembered as the explorer who first set foot on continental North America, but he was also a Chrisitan convert who played a key role in spreading the religion among the Norse people. And Harald Sigurdsson is still considered by many historians to be the last great Viking warrior.

“Obviously in Vikings, our main characters were semi-mythological for most of the way through,” historical advisor Justin Pollard explains. “But now we’re in the 11th century. The idea is to keep the main action with real characters.”

But, given the scarcity  of available primary sources, no one should look to Valhalla as a completely faithful retelling of the “extraordinary” lives of these men and women.

“Is it accurate? No. We don’t have enough information to make it accurate,” Pollard says. “This is not a forensic reconstruction. [But] we use a synthesis of different sources that we hope feels authentic. That’s the word I always use in any historical drama—is it authentic?”

There’s also the question of what makes a good story and whether the historical record is dramatic enough for modern-day television purposes.

“It’s hard to write a dramatic explorer, okay?” Stuart says. “Years ago when they brought me in to rewrite (the movie) Backdraft, Ron Howard said, ‘It’s just not exciting.’ And I said, ‘Ron, here’s a reason we make cop shows and not firefighter shows. Cops solve problems, firemen put out fires.’ And explorers are kind of in the same situation.”

“We have to build these characters as interesting people,” Pollard says. “So we take the little bit of history we have and add into that the later texts, the saga texts, which is where we get Leif Eriksson and Erik the Red and Freydis and all these people. And it’s like taking characters out of a children’s book. They’re wonderful or they’re terrible. And folding those together—it’s trying to find a middle ground.”

And, as most historians are painfully aware, history is most often written by those with an agenda, rather than those who desire to preserve a record of the things that actually happened.

“The funny thing about history is: who do you listen to?” Stuart asks. “Emma created her own biography about how great she was. Harald Sigurdsson took his poets with him wherever he went. So what we know about them and what we say is factual really is their lens that they want us to view them through.”

Instead, Stuart aims to use the “wonderful gray areas” that exist in between the facts we do know to tell his story.

“Leif, for example, is an interesting character. We do know he was one of the great Christian proselytizers of the Viking world. How did that happen? That’s [the space] where I go out and play,” Stuart says. “There’s lots of [room] for me to start developing that.”

From its opening frames, Vikings: Valhalla reflects many of the aspects of Viking culture which have fascinated us for hundreds of years.

“I think they have some of the values that we still respect today. They are great travelers. They have a great zest for exploration. Sometimes quite violent exploration, but exploration all the same,” Pollard explains. “They are the first white Western Europeans to reach the Americas. That’s an extraordinary thing to do at that time period. And I think that sense of adventure we all grew up on, that you tend to see in Indiana Jones movies. They’re the epitome of that.”

One of the most interesting and refreshing aspects of Viking culture is obviously its women. We all know the stories of shield-maidens and likely cheered both the political machinations and battlefield tactics of Lagertha in the original Vikings series. But Vikings: Valhalla introduces us to multiple intriguing female characters, from the deeply religious warrior Freydis Eriksdottir to Emma of Normandy, a woman who was the queen of three countries and the mother of multiple kings, including Edward the Confessor.

“One of the things I love about Viking culture is women could own property, women could divorce their husbands, women could rule kingdoms,” Stuart says. “But, after 1066​​ women essentially went into the Dark Ages.”

“In Christian medieval Europe, the role of women is being suppressed… becoming more and more proscribed,” Pollard adds. “This is not true in pagan Viking society. I hope what this series will do is show that pre-conquest, there were women who were absolutely actors in their own right. They were powerful.”

Making sure the female characters of Vikings: Valhalla were complex, layered individuals with agency of their own was a priority for everyone involved with the show.

“It was really important,” Pollard says. “Michael and Jeb wanted that right from the start. It’s about actually showing that the role of women in pre-conquest society was extremely dynamic and extremely important. And the only reason you don’t know that is because late historians have rubbed those bits out.”

“What I don’t want to write and I’m not going to write is a woman who is on the back foot,” Stuart says. “I find Freydis aspirational. She’s literally and figuratively a scarred character. But you love her because she’s always pushing forward.”

Valhalla also deals with another rapidly shifting aspect of 11th-century society, the widespread changes across Europe in the wake of the rise of Christianity.

“We’re coming towards the end of the Christianization of Europe at this point,” Pollard explains. “But a lot of the Christianization in Northern Europe was done at the point of a sword. And as we all know, the most appalling, bitter, and often bloody wars are over belief. It’s fairly easy if you’re just after someone’s gold mine or their house or whatever. But when you’re after their mind, it’s a very different thing.”

The other interesting tension, of course, is that this conflict isn’t simply between Christians and Vikings. Many Vikings by this period were Christians themselves and were as interested in converting their own people as much as any of the English might have been.

“The conflict and the drama of Valhalla is that [these people] are literally losing their beliefs,” O’Sullivan says. “And they’re converted to something that’s foreign to them and something that a lot of them go against. People don’t like change.”

Yet, unlike many series that wrestle with topics of faith and religion, Valhalla works hard to present both sides of its story fairly and with nuance.

“In [media] about Vikings in the 20th century, there has tended to be a Christian bias to it, which not surprisingly portrayed Vikings as barbarians,” Pollard says. “A lot of effort went into trying to play belief in terms of peoples’ own psycho-geography. It was really important to try to balance those up whereby nobody’s view of the world seems weird.”

According to Pollard, this involved treating everything from pilgrimages to pagan holy sites in a way that “people from a more Western tradition can understand as being equally valid.” And, as a result, many of Valhalla’s best dramatic moments stem from this clash between belief systems.

“I think if I went out and told everybody it’s a show about religion, no one would watch it!” Stuart laughs. “But I do think our beliefs about Christianity or Islam or Catholicism or any of those things are part of who we are, [even if] we haven’t been to church in forever. That’s a very powerful [thing].”

The depth and complexity of Valhalla’s narrative will likely surprise people tuning into the show expecting nonstop battles and bloodshed (though there are certainly a fair amount of both those things). But according to Pollard, that willingness to play with viewer expectations is part of its appeal.

“I think the success [of the franchise] has been exactly because it isn’t just dudes stabbing [things]. You’d get bored of finding ways to stab people, wouldn’t you?” he laughs. “The joy of [the show] is you’re going to see one of those periods in history that everyone says, ‘oh, yeah, I know about that.’ But in fact, you’ve no idea, and it will be genuinely surprising to see how it actually played out.”

Why The Sandman Season 2 Still Hasn’t Been Confirmed
Wrath of the Lich King Classic Release Time: When Will the WoW Update be Playable?
Call of Duty Modern Warfare 2: Best Guns and Loadouts
Who Will Win Celebrity Jeopardy!?
The Suspect Episode 5 Review: The Finale Reveals Who Killed Catherine