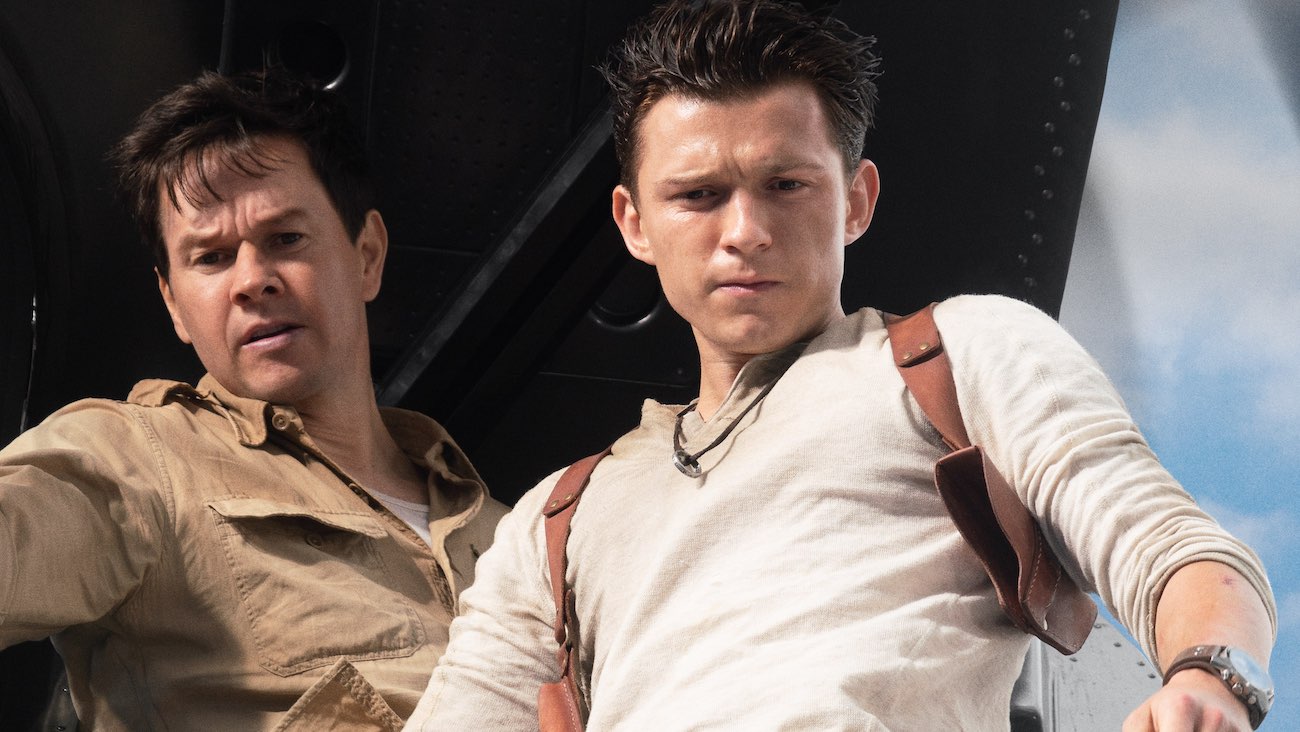 It may seem like a natural transition for Uncharted, one of the most cinematic game franchises in history, to be adapted to the big screen, but the games aren’t just movielike in their presentation; they’re every bit as well-made and entertaining as the Hollywood action movies they pay homage to, if not moreso. Even the games’ protagonist Nathan Drake, voiced by Nolan North, is as charismatic and likable as any movie action hero you could name. So, if the games essentially out-movie the movies they’re based on, why make an Uncharted movie in the first place?

As it turns out, Uncharted, starring Tom Holland as Drake and Mark Wahlberg as his conman mentor Sully, does in fact manage to justify its existence. It isn’t a great action movie, but it is a good one. Despite not being as compelling or polished as the games it’s based on, the first big screen Drake adventure is still a lot of fun, and Holland opens the franchise up to a younger audience that may not have been drawn in by video game Drake’s middle aged machismo.

As in the games, Nate and Sully’s relationship is the heart of the narrative, though the film takes an origin story approach in this first installment. Sully recruits Nate to help him track down a golden key that could lead them to a pile of riches, and while history nerd Nate’s curiosity is piqued by the key’s link to Magellan’s 16th century seafaring expedition around the globe, what seals the deal for the movie’s narrative is Sully’s admission that he knew Nate’s long lost brother, Sam.

Our two heroes learn to trust each other as their adventure unfolds, even if the road to get there is a bumpy one. They’re a far cry from the chummy partners in crime we see in the games, with Nate questioning Sully’s motives every step of the way. But the new story direction works nonetheless, and fan favorite Chloe Fraser (Sophia Ali) adds an extra layer of intrigue. Nate is never quite sure who to trust, or if he can trust anyone at all. Trust is the main theme of the story, and while this is perfectly reasonable considering it’s a story about a gaggle of thieves scrambling to find a long-buried treasure, all of the lies and backstabbing gets old after a while and dampens the mood more than it should.

What lifts the film’s spirits are the elaborate set pieces, which look almost as impressive as the ones from the games (this actually isn’t as big of a knock as it sounds). Some are inspired by the source material, like the dizzying cargo plane gunfight from Uncharted 3 that opens the film. And some are brand new, like a breathless parkour chase in Barcelona and a puzzle-driven brawl into the bowels of a creepy old church. The final battle, an aerial joust set in the clouds above the Philippines, is a ton of fun as long as you can overlook its outright absurdity. None of the action scenes are particularly groundbreaking or inventive, but they’re fast-paced and energetic, and Holland does a fantastic job of selling the humor and emotional stakes amid the chaos.

One of the smartest decisions director Ruben Fleischer (Zombieland, Venom) and his team made was to have Holland’s take on Drake be wholly his own. He bears only a slight resemblance to the video game Nate (the hair, the henleys) but he does very little in the way of imitating what North and the writers at Naughty Dog created. He drops the occasional “oh, crap!” here and there, which was virtually obligatory. But beyond this, Holland’s Drake is his own. He’s younger, more optimistic, and a touch less cocky than his digital counterpart, which works better for an origin story.

Wahlberg, on the other hand, isn’t as natural of a fit. The biggest issue here is that he’s a little too slick for the role and threatens to steal a bit of Holland’s cool guy thunder when they’re together. Their energies aren’t as complementary as one would hope, and the sections of the movie that see the two separated are, unfortunately, all the better for it. What’s worse, the film’s villains—the knife-wielding Braddock (Tati Gabrielle) and maniacal millionaire Santiago Moncada (Antonio Banderas)—add very, very little to the film, which is a shame considering the actors’ level of talent.

Holland and Ali are tremendous together, however, and save the movie from mediocrity on multiple occasions with their mean-but-kinda-flirty quips back and forth.

Strangely, Uncharted’s greatest strength actually pertains to something we don’t see on screen–its potential sequel. The movie feels like a terrific setup for a future story that would be more in line with the spirit of the games, particularly with regards to Nate and Sully’s friendship. Without spoiling anything, there is a tease as to what one could expect in a sequel and, infuriatingly, it is maybe the most entertaining morsel of suspense in the entire movie. With hope, Nate’s big screen debut is solid enough to warrant a bigger, better sequel down the line because, man… where’s Elena?!