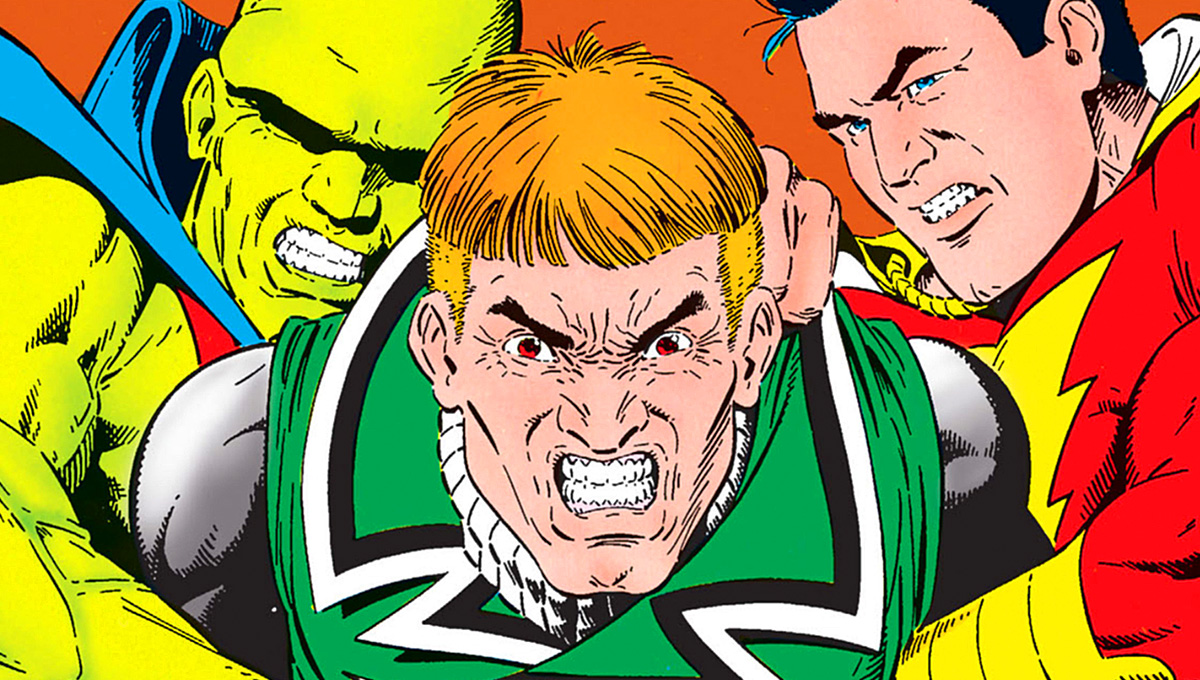 This article contains The Suicide Squad and Peacemaker and spoilers.

Picking up right where James Gunn’s The Suicide Squad left off, Peacemaker was a profane, hilarious, and brutally violent exploration of the weirder side corners of the DCEU that fleshed out the world of ARGUS and Task Force X. It even brought some new depth to Amanda Waller as a bonus. Like Gunn’s DC movie, Peacemaker wasn’t afraid to revel in some obscure DC Comics references and by implication expand the boundaries of the DCEU (Green Arrow! Doll Man! Matter-Eater Lad!). But nobody really expected the Justice League to show up…did they?

Well, they did. And it was awesome.

Yes, the Peacemaker season finale actually delivers a Justice League cameo. A joke earlier in the episode to “call the Justice League” paid off with Superman, Aquaman, The Flash, and Wonder Woman appearing mostly in silhouette, too late to be of any help and getting a verbal lashing from Cena’s Peacemaker. OK, the “not-quite-a-real-cameo” thing has been done before, notably in the end of of Shazam!, which couldn’t get Henry Cavill in the Superman suit but still managed to sneak the Man of Steel on screen. But Peacemaker took it a step further, with Jason Momoa’s Aquaman and Ezra Miller’s Flash actually trading barbs in a hilarious moment.

I mean, it’s really something of a miracle that Warner Bros. execs just allowed Momoa, the star of their first billion dollar DCEU movie with Aquaman, to utter the words “fuck you, Barry” to Miller’s Flash, whose own movie is due out later this year.

While “hilarious” isn’t really a word we’ve come to associate with the DCEU version of the Justice League, as director Zack Snyder favored a mythic, almost operatic take on the team, this brief cameo is proof that Gunn’s edgier, comedic sensibilities work just as well for core DC characters as they do for the misfits of The Suicide Squad. Hell, The Suicide Squad even featured the first villain the Justice League ever faced as its primary menace with Starro, and the weirdly nuanced alien threat of Peacemaker wouldn’t have felt completely out of place in a League story, either.

Gunn has proven he’s more than capable of big action and cosmic spectacle, both with his DC work and with the Guardians of the Galaxy films at Marvel. And while the weirdos he’s worked with in the DCEU might make it seem like he’s best suited to sticking to the margins, that isn’t necessarily the case. In fact, one of the greatest Justice League comics of all time is tailor made, not just for Gunn’s sensibilities, but for the strange transitional moment that the DCEU itself is in.

When J.M. DeMatteis, Keith Giffen, and Kevin Maguire were given the green light to relaunch the Justice League comic in 1987, it was a transitional time for DC Comics. Crisis on Infinite Earths had just transformed DC continuity with a new, streamlined, non-multiversal approach. Originally intended to reboot (decades before this was a word we associated with entertainment franchises) the entirety of the DC universe, editorial instead opted to take a blended approach, with certain characters (Wally West’s Flash) picking up the legacy of their recently-deceased predecessors and others (Wonder Woman, Superman) getting fresh starts from high profile creative teams. As a result, DC’s first Justice League book of the post-Crisis era had some editorially-mandated limitations, with key characters like Superman, Wonder Woman, Flash, and the most famous (at the time) Green Lantern unavailable for inclusion on the roster.

The result was a team consisting of mostly second-stringers: Blue Beetle, Black Canary, Dr. Fate, a new version of Dr. Light, Martian Manhunter, Mister Miracle, Booster Gold, Guy Gardner (an obnoxious, arrogant Green Lantern), all led by a reluctant (and usually annoyed) Batman. Giffen, DeMatteis, and Maguire decided to take this group of also-rans and turn Justice League into a book that dealt as much with workplace dynamics and interpersonal conflicts/comedy as it was about world-saving superheroics. Fans of beloved (and brilliant) DC TV show Legends of Tomorrow might recognize the formula, for example.

Justice League gave birth to the Blue Beetle/Booster Gold best buddy/bromance, featured Black Canary constantly on the verge of throttling the insufferably sexist Guy Gardner while simultaneously reveling in Gardner tormenting the childlike Shazam for being too straight-laced, introduced Martian Manhunter’s fondness for Oreos, and delivered arguably the funniest page of any DC comic of a generation.

The book was a massive critical and creative success, unlike anything being published by DC or Marvel at the time. The entire run has been collected in trade paperbacks, and it’s also available to read on DC Universe Infinite. This, along with the book that heavily influenced both Gunn’s The Suicide Squad and Peacemaker, Jon Ostrander and Kim Yale’s Suicide Squad (which launched at the same time as Justice League) hold up incredibly well and I can’t recommend them highly enough.

Interestingly, the DCEU now finds itself in a similar transitional moment that DC Comics found itself in back in 1987. Any attempt to make a new Justice League movie has to reckon with the fact that several key characters are essentially unavailable. Despite a stated desire to return to the role, Henry Cavill’s time as Superman appears finished, and Ben Affleck has no intention to don Batman’s cape and cowl. Gal Gadot is pretty busy, and completing her Wonder Woman trilogy with Patty Jenkins would likely be the priority over another Justice League movie. While the DCEU has yet to properly introduce the Green Lantern, a Green Lantern Corps TV series is in development at HBO Max, which probably takes any GL off the board for inclusion at the moment.

The mission statement of the DCEU itself has changed considerably since Zack Snyder first built the big screen Justice League. In what some may see as an overcorrection, recent years have seen a lighter tone take hold in movies like Shazam!, The Suicide Squad, Birds of Prey, and even Aquaman. But just as it was in that classic run of Justice League comics (and, for that matter, Gunn’s two DC screen efforts), that tone doesn’t lower the stakes. Gunn is particularly at home with cosmic/alien threats, exactly of the type that the Justice League should be taking on.

It’s easy to imagine a new Justice League movie featuring known quantities like Momoa’s Aquaman, Miller’s Flash, Zachary Levi’s Shazam, and Jurnee Smollett’s Black Canary making up the core of the League, alongside newcomers like Xolo Maridueña as Blue Beetle and perhaps Leslie Grace’s Batgirl. Perhaps it’s time to finally let Harry Lennix shine as the Martian Manhunter, too. And with rumors swirling that Michael Keaton will continue on in the DCEU as an older, more experienced Batman, an extended cameo as an exasperated strategist would certainly help complete the flavor of that classic comic series.

Keep in mind, I’m not advocating for a flattening of the DCEU style to Gunn’s edgy comedy. One of the smartest things Warner Bros. has done to distinguish themselves from their chief superhero movie making competition has been to allow different directors to bring their distinctive styles to the works they’re adapting. There’s still room for exploration of more serious themes as we saw in Patty Jenkins’ first Wonder Woman movie or that we’re likely to see in Matt Reeves’ The Batman, and a diversity of tones and styles should be embraced and celebrated.

But in the meantime a Gunn Justice League would revitalize an unfortunately (and perhaps unfairly) troubled brand that should be the flagship of Warner Bros’ entire DCEU efforts. It might also be seen as the culmination of this current era of the DCEU, which still must uncomfortably navigate its own continuity and fandom politics. The release of Zack Snyder’s Justice League was a vindication of both that director’s vision and his fans’ faith in him, but by all accounts, that era is over. A pandemic, an R-rating, a difficult franchise legacy, and a simultaneous streaming release hobbled Gunn’s The Suicide Squad at the box office, but a potential new Justice League movie wouldn’t face the same challenges.

Now, if only he hadn’t already used Starro…