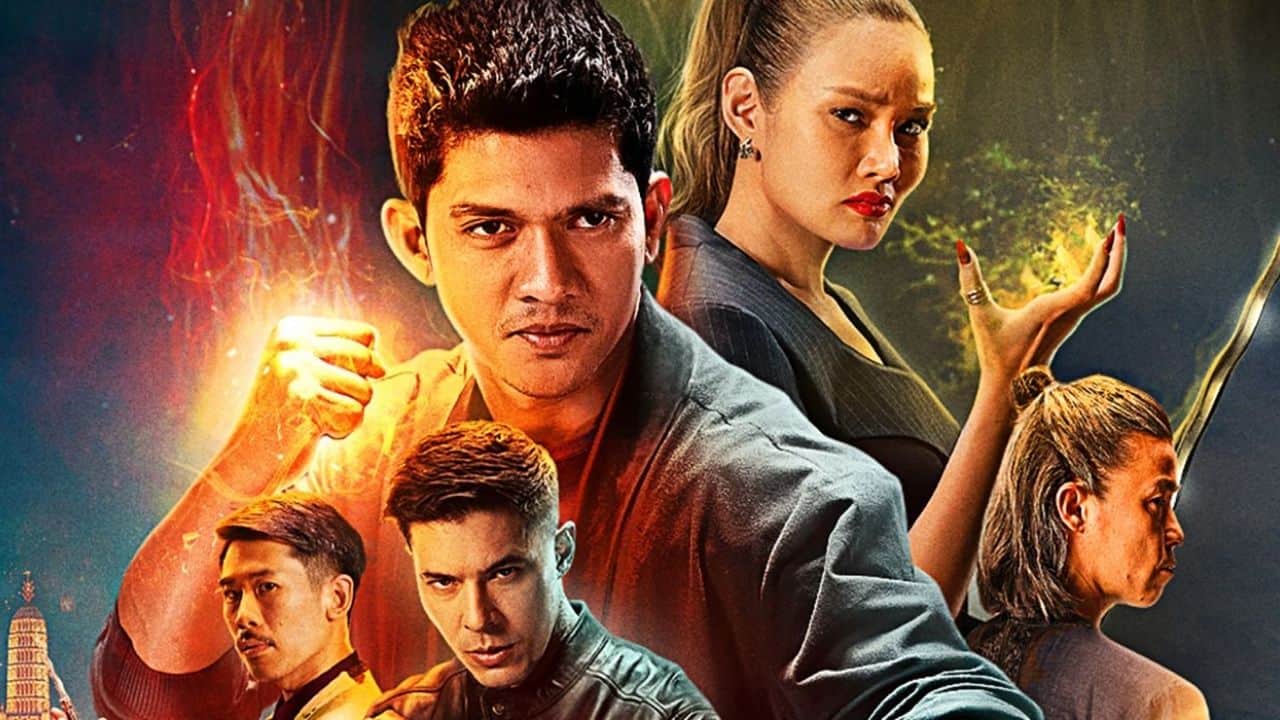 When Tommy (Lawrence Kao) quips this line in a Fistful of Vengeance, it’s almost meta. Fistful of Vengeance is the feature film sequel to Netflix’s 2019 10-episode martial arts driven series Wu Assassins. It is produced in the same spirit as Fox’s Firefly and Serenity or Netflix’s own Sense8 by the Wachowskis (which also had a lot of martial arts.)

Beyond Tommy, two other Wu Assassins leads reappear in Fistful of Vengeance. Indonesian martial arts superstar Iko Uwais reprises his role as Kai Jin, the San Francisco Chinatown chef and last incarnation of the Wu Assassin, an eternal superhero warrior out to save the world. Also there’s Lu (Lewis Tan), a mere mortal like Tommy but with ridiculous Kung Fu skills. Wu Assassins was a martial arts driven show, reminiscent of AMC’s Into the Badlands, DirecTV’s Kingdom, and Warrior on Cinemax.

With a predominantly Asian cast, Wu Assassins was ahead of its time. Like CW’s Kung Fu reboot last year, Wu Assassins was a forerunner of Asian inclusion, just a bit premature. It didn’t receive the showering of accolades that Kung Fu got, but that show came out right when the spike in Covid-blaming Asian hate crimes left media clamoring for some positive Asian representation. Kung Fu received copious critical praise hailing it as flagbearer for the ‘Stop Asian Hate’ movement and AAPI representation.

Despite preceding the pandemic, Wu Assassins had an almost prescient sensitivity. The series contained clever cultural nods that spoke to an Asian American experience. Netflix capitalizes on this with its teaser preview which spotlights a scene from the episode 7 “Legacy” where Uncle Six (Byron Mann) educates a racist diner waitress about the history and rights of Asian Americans. It’s almost a lecture, followed immediately by Uncle Six and Kai beating the crap out of a gang of offended rednecks, just to emphasis the point. Fistful of Vengeance perpetuates this Asian inclusiveness vibe with an almost all Asian cast. As Tommy said, “Like the Avengers…but Asian.”

Everybody was Kung Fu Fighting

However, this AAPI representation takes a supporting role in Fistful of Vengeance. Just like the series, this franchise is first and foremost a showcase of martial arts. Fistful of Vengeance is almost solid fight scenes, even more so than the original series. It doesn’t mess around with too much plot, just like its predecessor. Wu Assassins was a pastiche of clichés, reciting time-worn martial arts tropes such as the ancient “chosen one,” the family restaurant threatened by a Chinatown triad, the defiant cop who’s doing the right thing despite her commanding officer’s orders, the junkie brother, and so on. It’s part homage and part rip-off, liberally poaching elements from shows such as Highlander and Avatar: The Last Airbender.

What redeemed Wu Assassins was a cast packed with genuine martial arts masters. Most martial series use actors who just had a few months of training prior to filming, and stalwart fans of the genre can tell. Uwais was a national martial arts champion who was discovered in his breakout film The Raid and went on to star in a string of well-regarded yet brutal martial arts films, as well as having a cameo in Star Wars: The Force Awakens.

Tan was trained from childhood by his father, the veteran stuntman and martial artist Philip Tan. When he took the role of Lu, he was fresh out of Into the Badlands and on the way to the lead role in Mortal Kombat. The buddy-film chemistry of Uwais, Tan, and Kao works well. They are more like the Asian Three Musketeers then the Avengers. However, it struggles to echo the importance of family, a formula that has been so lucrative for the Fast & Furious franchise.

Other noted martial artists from the original series included Mark Dacascos (John Wick Chapter 3: Parabellum), Katheryn Winnick (Vikings), and JuJu Chan Szeto (Crouching Tiger Hidden Dragon: Sword of Destiny). However, beyond Uwais, Tan, and Kao, only Chan Szeto reprises her role as Zan. Fistful of Vengeance is not Season 2 compressed into one movie. This is a whole new story.

Fistful of Vengeance is disconnected from the Wu Assassins finale. In the final scene, the first Wu Assassin Ying Ying (Celia Au) appears before Kai to tell him “The world still needs the Wu Assassin” and the restaurant begins to mystically collapse. But that teaser goes nowhere. Au doesn’t appear in Fistful of Vengeance and Jenny (Li Jun Li), the proprietor of the restaurant and Tommy’s sister, is dead. Fistful of Vengeance is Kai, Lu, and Tommy avenging Jenny’s killer in Thailand. It’s just as well because that final teaser felt incongruously tacked on, as if the showrunners realized at the last moment that they needed something to pitch for Season 2. Netflix should go back and delete that scene now.

Fistful of Vengeance immediately dives headfirst into the action. When Kai, Lu, and Tommy are chasing clues at a Thai nightclub, a big bar brawl breaks out pitting the trio against a jiangshi, which is Chinese kind of vampire. This sets the pace for the film – it’s a barrage of Kung Fu fight scenes strung together with a supernatural story that gives fan service to Chinese mythology akin to Shang-Chi and the Legend of the Ten Rings. In some ways, Fistful of Vengeance harkens The Raid in its unabashed portrayal of gratuitous violence. It’s almost like fight porn. The threadbare plot breaks up the action just enough to grab more snacks and refresh your libations.

Fistful of Vengeance adds some new cast members from other action-based franchises including Jason Tobin (Warrior, F9), Pearl Thusi (Queen Sono), and Yayaying Rhatha Phongam (The Protector 2). The stunt team is predominantly Thai, a nation that captured the attention of action film fans twenty years ago with the bone-crunching flicks of Tony Jaa and Panna Rittikrai.

One Fight in Bangkok and the World’s Your Oyster

The postcard perfect Thailand locations are captured with impressive drone shots. It’s the cinematography that elevates Fistful of Vengeance above the average martial arts flick with expansive bird’s eye perspectives on the fights. One soaring shot that moves from a parking structure car chase to a rooftop poolside fight and then back to the car chase makes for a tasty bit of ultraviolence. It’s a sensational piece of drone camerawork and action choreography, one of several surprisingly brilliant scenes that stand as testaments to the filmmakers’ technical skill.

Where Fistful of Vengeance succeeds is the action. Uwais, being a chef, is bloody handy with butcher knives and still delivers some of the best elbow strikes in film. At 6’ 2”, Tan strikes an imposing figure and backs that up with the agility and precision from a lifetime of training. Kao’s background is in dance not martial arts, but he knows how to move and levels up considerably for Fistful of Vengeance. And Chan Szeto has fierce enough skills for a villainess who can convincingly trade punches and flying kicks with the boys. For fans of fight choreography, there’s some serious eye-candy here.

Ultimately Fistful of Vengeance is more about action than plot. For those looking for a profound story, this is the wrong genre. The scope and intensity of the action builds consistently throughout the film, as any good actioner should, and a climactic battle where Kai and Lu face off is masterfully executed with a complex one-er where the camera bobs and weaves through the fisticuffs for a dazzling and innovative match. For martial arts fans, Uwais versus Tan is worth the price of admission.

Fistful of Vengeance is now available on Netflix.