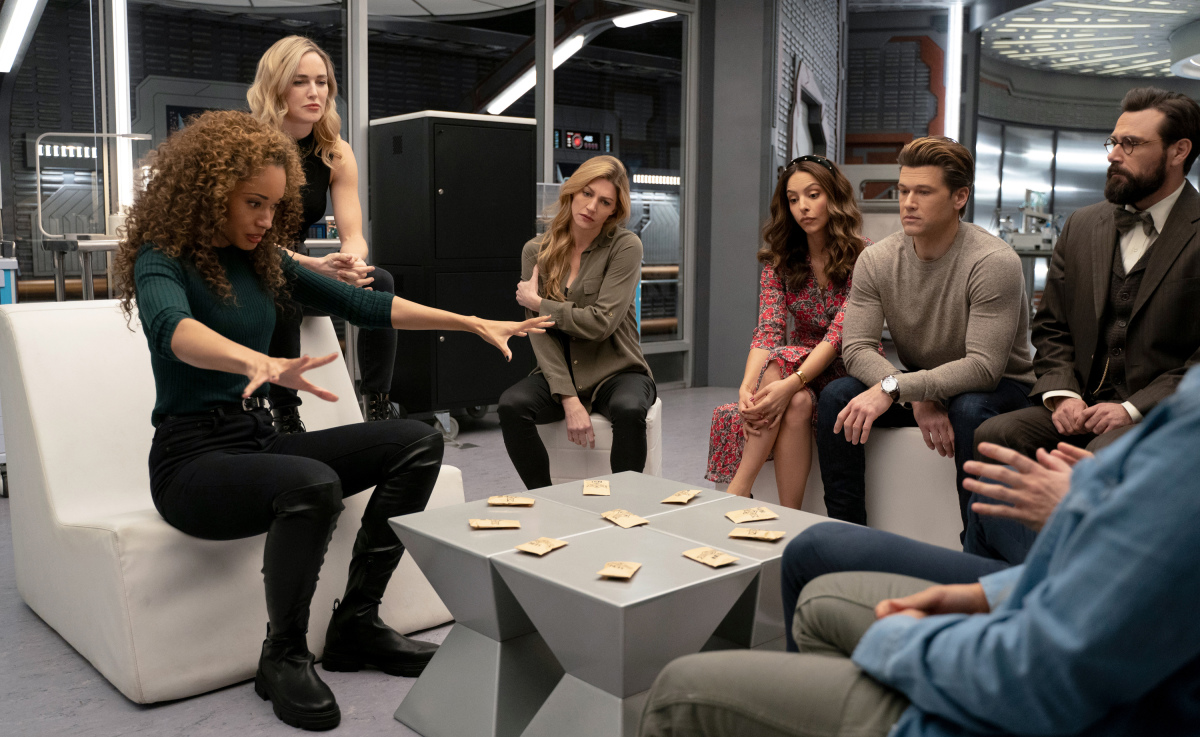 It never occurred to me before today to check and see if DC’s Legends of Tomorrow had been renewed for an eighth season. I just took it for granted that a show that was so consistently perfect would of course be coming back for another year. But after “Too Legit to Quit,” I’m really starting to wonder.

I know there’s one episode left in this season. And it’s set up beautifully – this episode ends in an exceedingly badass way, and had me really pumped for next week. Only then I thought to check if we were getting another season, and I went and made myself sad all over again. That’s not terribly fair: the first through fourth times I was sad tonight, it was the Legends’ fault.

The episode is mostly structured like a finale. The gang has to turn Evil Gideon back on, to reactivate sickbay and help save Goodeon (aah? AAH?). They invoke Gideon’s protocol 276, her inherent self-preservation instinct, to protect all of them – if EG airlocks them all, she’ll catch her embodied form too, so she can’t do that. From there, Goodeon and Gary negotiate safe passage for the team: they’ll each retire back to their correct timelines, while Goodeon and Gary stay on as Captain and Captain’s boyfriend of the Waverider. And to convince them to take the deal, each member of the team gets a glimpse of their future.

This kicks off a chat among the team about what retirement might look like, and a quick run through of all the people who have left the show I mean the team since it started. This is where it started to feel like a finale – this kind of melancholic introspection is very abnormal for this series, the superhero show most impacted by marijuana legalization. Even the 100th episode was triumphant in its reminiscence. Here it was just a reminder of all the things we’ve lost as this show rolled on. And it was pretty sad. Even though I can comfortably say Legends of Tomorrow is better now than it’s ever been, it was still pretty great before, and the chemistry this cast has had since it made the switch to a comedy has been undeniable, even through the seven different iterations.

Those four aforementioned times I got sad came, in order, at Zari’s future; Nate’s future; Behrad’s future; and Gwyn’s future. Zari gets to be a tycoon, inventing “audible lipstick” whatever the hell that is, and becoming a titan in the cosmetics industry. But nowhere in her future clips does she see the totem on.

This has implications for Nate, as far as I can tell, because his future doesn’t involve the totem, but it does have him writing a book about his time travel adventures with an absolutely bitchin professor goatee. Behrad becomes a musician, and his delight at getting a copy of his own record is a highlight. But Gwyn’s reward is he gets to go live on a Welsh sheep farm, alone, for the rest of his life. Astra runs for Congress (I think – I believe she spent too much time in Hell to be eligible for the Presidency) in 2040, and Sara and Ava have a daughter.

I was, to put it mildly, a disaster during these flashes. If you made it through them without getting a little misty, congratulations for not being a catastrophe because the world is a nightmare and your kids don’t let you sleep ever, I guess. Jes Macallan’s reaction to seeing her future daughter is stunning, one of the best bits of acting this show has ever seen, and Tala Ashe proves once again her brilliance showing Zari’s discomfort at going back to a pre-hero life. Those two have seen massive character growth since their introduction to the show, and you get all of that growth packed into a couple of very brief moments thanks to gifted actors.

The show does a great job of leaving some little threads to pull at should they get renewed – Zari’s unhappiness at returning to a life she perceives as frivolous; Nate’s insecurity at how much of his future is about someone else’s past; of course, the threads meant to be picked up next week. But I’m shocked at how much actual closure we got. I would honestly be a little surprised if Ava and Sara don’t walk away from the Waverider after this even if we get another season, their story feels so well wrapped.

As for the badassery meant to be picked up next week, well…Gwyn gets to go home with his love Alun thanks to some Legends trickery. Only it wasn’t real – Gideon discovered that Alun’s death is a fixed point, so she makes a robot duplicate of him. Dark Gideon uses her lie to drive a wedge between Gideon and Gary, and then airlocks Gary as an impediment to her plans. And at the very end of the episode, Gwyn disconnects his beloved, with a promise to find the real one. Whether it’s the last episode of Legends or not, next week looks like a banger.

House of the Dragon Anthology: What Other Targaryen Stories Could Be Explored
13 MCU Theories That Were Too Good to Be True
The Best Rick Grimes Moments on The Walking Dead
Overwatch 2 Release Time: When Will the Free-to-Play Sequel Launch?
GamesMaster: Before YouTube and Twitch, Sir Patrick Moore’s Floating Cyborg Head Was the Best in Gaming TV