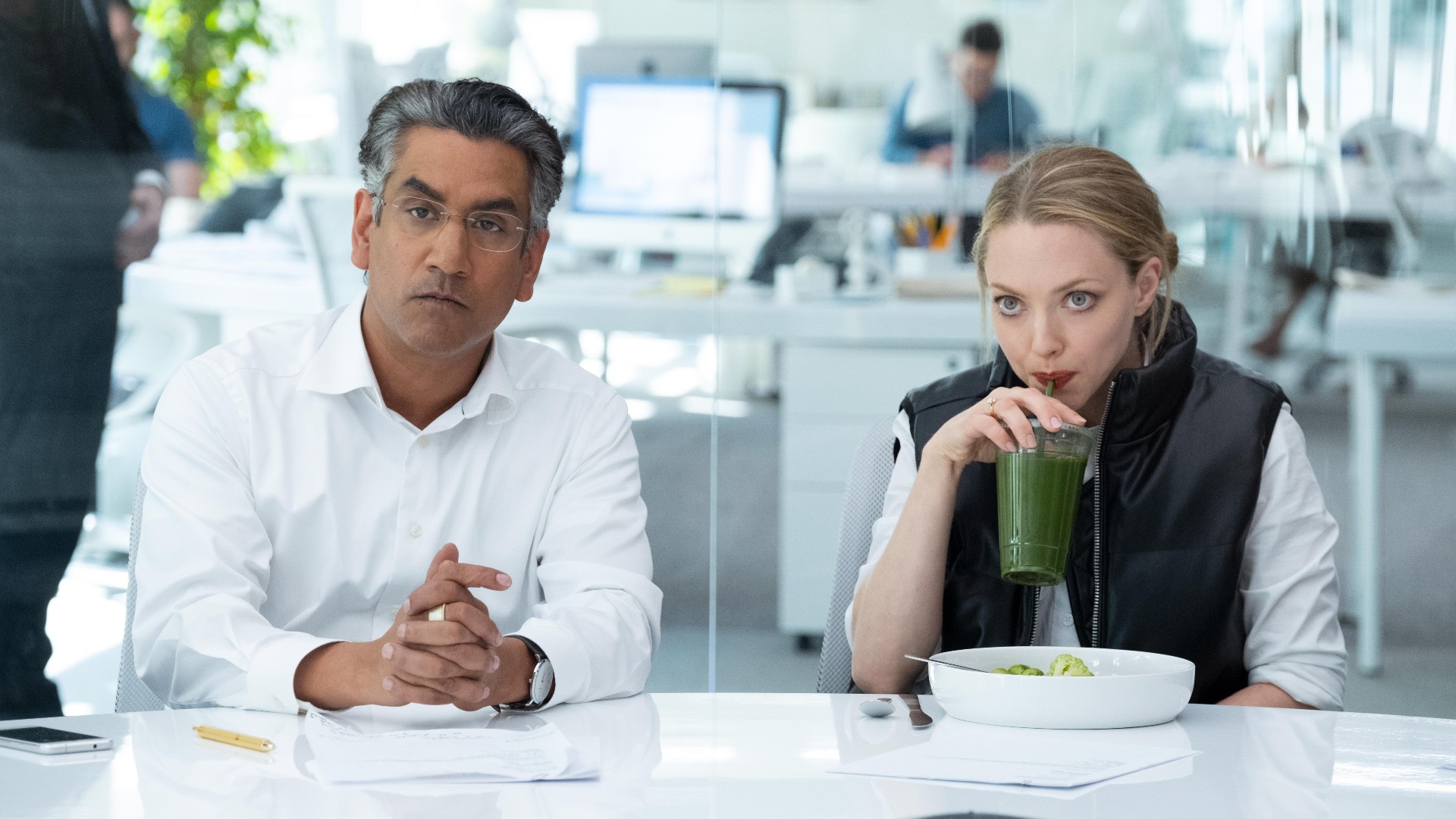 This article contains potential spoilers for The Dropout.

We’ll leave it to the sociologists to determine exactly why, but stories about big time liars are huge right now. The recent trend arguably got started this year with the Netflix series Inventing Anna, which covered one woman’s successful attempts to convince New York society she was a German heiress. Coming up later in March is WeCrashed on Apple TV+, which will follow the meteoric rise and precipitous fall of joint workspace company WeWork.

Now Hulu is presenting its own fraudulent epic with limited series The Dropout, which is set to unpack arguably the most flagrant, outrageous, and bizarre case of corporate fraud in the new millennium. The Dropout is based on an ABC News podcast of the same name, which was in turn inspired by Wall Street Journalist John Carreyrou’s coverage of entrepreneur Elizabeth Holmes and her wildly successful (until it suddenly wasn’t) Silicon Valley startup Theranos.

With Theranos, Holmes was trying to create the medicine and biotech world’s version of Apple. And for a fleeting moment in time she was nearly successful with the company reaching a peak valuation of $9 billion. A crash followed, however, when it was uncovered that Theranos’ mission of providing dozens of diagnostics tests with only a single drop of blood was not successful…and some even argued impossible. That led to a precipitous fall for Holmes, the company, and many of its investors.

The Dropout won’t be the only Theranos story in town for long. A movie directed by Adam McKay and starring Jennifer Lawrence has been in the works for a while. But the Hulu series boasts eight hour-long episodes to be able to really get into the nitty gritty details of this story. Amanda Seyfried stars as Holmes, taking over the role from Kate McKinnon (who appears to have chosen Peacock’s Joe v. Carole over this project).

Though The Dropout’s interpretation is exhaustive and effective, if you just want to know the highlights of this wild saga, we’ve got you covered. Read on to learn more about Theranos and why the story of the company and its fall is such a big deal.

The story of Theranos and the story of its founder are inextricably linked. Elizabeth Holmes was born in Washington, D.C. and raised in Houston. Why Houston, you ask? Well, the Holmes family had its own unfortunate experience with corporate fraud well before Elizabeth founded Theranos. Her father, Christian, was the vice president at Houston-based energy company Enron, which went bankrupt after an accounting fraud scandal in 2001.

Despite the family’s loss of income, Holmes was able to begin attending the prestigious Stanford University in 2002 with the intention of studying chemical engineering. Proving that she’s basically the Forest Gump of fraudsters, she also contracted SARS-CoV-1 (yes, basically the COVID beta)  while studying abroad in Singapore.

Around this time, Holmes began developing an interest in creating a technology that would lessen the need of using syringes to draw blood (potentially due to her experience being poked and prodded following her SARS diagnosis). Her first patent was filed for a wearable path that would administer medication. When that went nowhere, Elizabeth pivoted to a conceptual machine that would be able to run multiple diagnostics on just one small drop of blood. Despite being informed by her Stanford medicine professor that this idea was functionally impossible, Holmes dropped out of school (hence the name of the Hulu series) to pursue the creation of the company that would be called Theranos.

We’ll cover the operations of Theranos in the next section, but first there are some other things you should know about Holmes that make her a particularly fascinating character. For starters, her physicality is … let’s say: noticeable. With enormous blue eyes and long blonde hair, Elizabeth would stand out in just about any context, but she was particularly distinct in the world of Silicon Valley with its male-dominated founders and investors.

The other thing is the voice. Throughout her time as Theranos CEO, Holmes spoke in a very deep baritone that one might not expect to belong to a relatively small woman. Some commentators have theorized that Holmes was trying to mimic the voice patterns of her favorite male tech entrepreneurs, like Steve Jobs, whose appearance she frequently emulated by wearing black turtleneck sweaters. But several members of her family have maintained that her voice is authentic.

Holmes founded Theranos in 2003, naming the company after a portmanteau of the words “therapy” and diagnosis”. In its early years, the company’s most defining feature was its almost supernatural ability to bring in eager investors. Though venture capitalism is the lifeblood (pardon the pun) upon which all of Silicon Valley is based, Theranos went above and beyond in securing VC money. Due to Holmes’s beguiling public persona and clarity of vision, Theranos took in nearly $700 million of venture capitalist and investor money.

The list of folks who invested in Theranos reads like a who’s who of bigtime American decision-makers of the 21st century. Billionaire Betsy DeVos (eventual Secretary of Education under President Trump), the Walton family (of Walmart fame), Rupert Murdoch (News Corp founder), Henry Kissinger (former U.S. Secretary of State), Larry Ellison (Oracle founder), were just a few of Theranos’s investors. Even the federal government was impressed with the startup’s potential, with then-Vice President Biden taking a brief tour of the company’s campus and calling Holmes “inspiring.”

It’s easy to see why so many people were taken with Theranos. The company’s mission, if successful, would have radically changed the face of diagnostic medicine forever. Unfortunately, signs that it would never be able to pull that mission off were evident very early on. Theranos’s first diagnostic prototype, dubbed the “Edison”, was a disaster. The machine could not run dozens of diagnoses based on one small sample of blood, let alone one reliable one. Many times, it would not even work at all unless the environmental conditions around it were pitch perfect. To provide at least some proof of concept and keep investors happy, Theranos began running diagnostics on commercial machines developed by other companies. But even these weren’t particularly reliable, given that the small amount of blood had to be delighted to be recognized in the appliance.

Nevertheless, Holmes became quite famous during this period. The entrepreneur appeared on the covers of magazines, was invited to leadership conferences, and most notably: cut a huge deal with pharmacy/retail chain Walgreens to install its non-functioning blood diagnostic machines in stores country-wide. And that was the beginning of the end.

If any of this sounds remotely interesting to you, I highly recommend checking out John Carreyrou’s book of the whole story, Bad Blood: Secrets and Lies in a Silicon Valley Startup. Before writing the definitive take on Theranos’s downfall, Carreyrou was an investigative business journalist at the Wall Street Journal. In late 2015 and early 2016, he was contacted by several sources who wished to blow the whistle on Theranos’s fraudulent business tactics.

The story gets even more intensely weird from here as Holmes and the company’s president, Ramesh Balwani (who was revealed to be Holmes’s secret boyfriend despite a steep age gap) ran Theranos with all the paranoia of a Cold War-era KGB outpost. Workers at Theranos were intensely siloed off, with entire departments having no idea what the folks next door were working on. Balwani (played by Naveen Andrews in The Dropout) was a volatile presence, getting into several shouting matches per day and firing employees at will.

But that was just the tip of the iceberg. The Centers for Medicaid and Medicare services (CMS) had sent a letter to Theranos warning of irregularities it had uncovered in its procedures and equipment. At this point, Theranos’s machines were already in select Arizona Walgreens stores and much of the data the machines were producing was completely incorrect. Several times, the devices reported potassium levels in patients that would indicate they were dead.

Carreyrou published his findings in The Wall Street Journal on Oct. 16, 2015. By April, the SEC launched an investigation into Theranos for defrauding the public and (more importantly, probably) investors. Criminal proceedings began in 2018 and just this year, on Jan. 3, Holmes was found guilty on three counts of wire fraud and one count of conspiracy to commit wire fraud.

The Theranos story is a fascinating case of fraud that includes many victims: investors, patients, doctors, and more. The last victim, however, just might be Hulu, who now presumably has to edit The Dropout to include a postscript on its lead character’s fate.