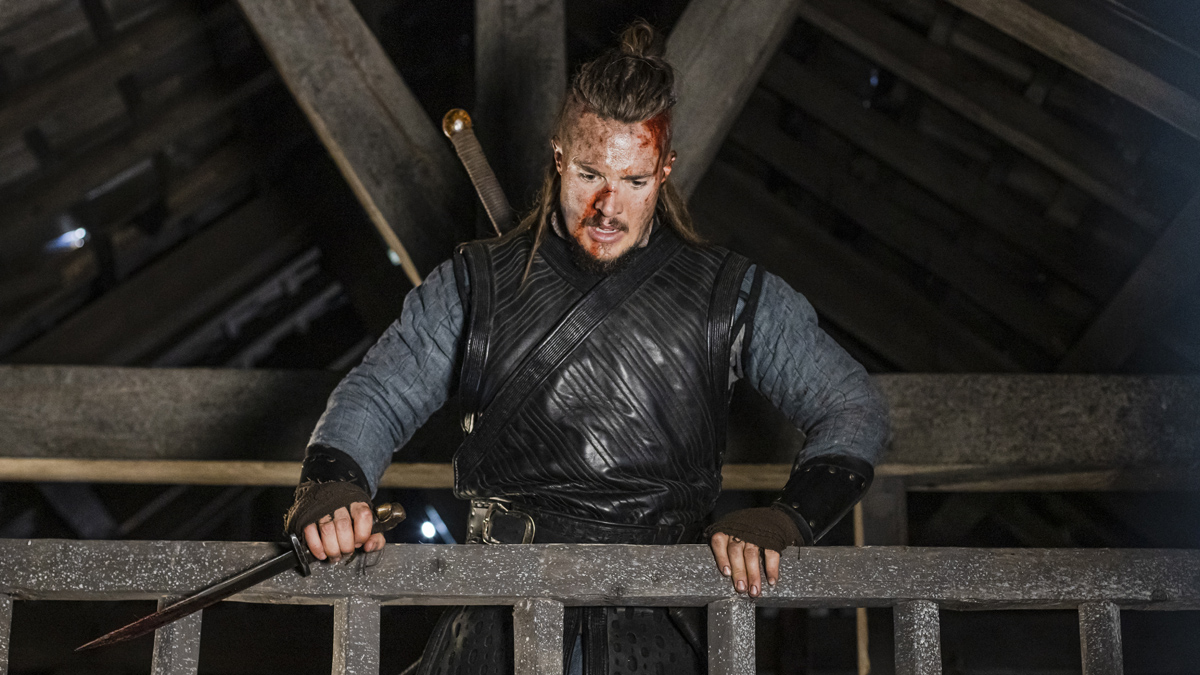 After five seasons, Uhtred’s cry of “To Bebbanburg!” is finally a toast and not a direction of travel. He’s made it back. Every twist of fate over the years that took him further from his childhood fortress was leading to this moment – when his destiny and that of the Wessex throne would become one and the same. Now he has a home for his children, a stronghold for his people, and a future. He also has the blessing of the gods in the thunderous rainstorm that put out the fire started by King Constantin’s army – both an act of Thor and another holy baptism for this Saxon-Dane.

That future isn’t going to be all peace and ale though, as The Last Kingdom’s ending showed. Uhtred’s quest for Bebbanburg may have been resolved, but it’s resulted in fresh conflict with the King, and put a barrier in the way of Edward fulfilling his father’s dream of a united England. The villains may have been slain, but threats remain. And Uhtred’s family is about to grow, with the return of his youngest son, Osbert. Here’s how the show’s ending paves the way for the forthcoming feature-length movie Seven Kings Must Die.

When Uhtred proposed the Bebbanburg mission to Edward, the original pitch was to ambush King Constantine’s army on the road, while Uhtred’s band infiltrated the castle to capture the treacherous Lord Aethelhelm and rescue the King’s niece, Aelfwynn. Uhtred would then be installed as leader of the Northumbrian castle, and hold the lands in Edward’s name. (Uhtred’s cousin Whitgar had sworn allegiance to King Constantin of Scotia, making Bebbanburg a threat to Edward’s rule and site of potential Scottish rebellion.) With Uhtred in power and sworn to him there, Edward could finally complete the jigsaw and unite England as one kingdom.

Edward took some convincing but reluctantly agreed to the plan and then publicly took credit for it – as is the way of Wessex kings benefitting from Uhtred’s military expertise. When Constantin surprised them by arriving at the fortress early, the strategy was redesigned, but Edward’s impatience and pride came close to ruining everything. He stormed the castle early, unaware that Constantin’s army was in close pursuit, and suffered a terrible push back. It was only the arrival of Stiorra’s Danish troops – recruited by Lady Aelswith – that turned the tide and defeated Constantin’s men.

When it came to the exchange of prisoners, Constantin promised Uhtred that he would always fight for his claim on Northumbrian lands. In order to establish a longer peace and make Bebbanburg a Saxon land where Danes could thrive, Uhtred bargained with him. Constantin would give up his claim on Bebbanburg in exchange for Uhtred not swearing the fortress to King Edward. “We will remain between the two, sworn to neither, to ensure peace.”

Uhtred keeping Northumbria independent – though acknowledging Edward as overlord and paying Wessex tribute – enraged the King because it stopped him from fulfilling his father’s dream. Uhtred told Edward that the discord the King had sown between Saxon and Dane in the matter of Sigtryggr meant that he was not the right man to unite all of England, but that it would happen eventually, telling him “The future will come, wait for it.” Waiting isn’t Edward’s strong point, as we saw in season five. The Wessex king was last seen plotting military strategy.

South of Bebbanburg, the city of York/Eoforwic was left under the rule of Sigtryggr’s brother Rognvaldr. When Stiorra refused to bend the knee to King Edward and rule the city in his name, Edward looked to the next available puppet he could put on the throne. Rognvaldr readily accepted, and was last seen lording it up and demanding ale from his subjects. What we know of Rognvaldr doesn’t augur well for the city. He used to be a drunken womaniser who was radicalised by Brida’s cult and betrayed his brother to let her attack the city. Selfish and disloyal, there’s no chance he’ll be a wise leader, which is sure to lead to trouble.

Fans have been asking after Uhtred’s youngest son ever since he went without a mention when Young Uhtred and Stiorra arrived in season four. Now we know where he’s been: with Hild on the holy island of Lindisfarne. A scene in the finale showed Hild leading the young Osbert (Uhtred’s first name before he was re-christened with the name of his dead older brother) along the beach. They’re off to meet the new Lord of Bebbanburg, whom Hild says can teach the boy about his origins. “You think he may once have met my father?” asks Osbert, to which Hild smiles and replies “Something like that.”

Osbert is Young Uhtred and Stiorra’s little brother, and the youngest child of Uhtred and Gisela, who died giving birth to him in season three. He’s grown up as a (reluctant and unscholarly, by the sounds of his complaints about Hild’s attempts to teach him scripture) Christian with no knowledge of his roots, so his introduction to the family should provide plenty of drama.

Love in the air for Eadith and Uhtred

Any woman who falls for Uhtred should consider her days numbered; the man seems cursed to lose lovers. Skipping over Mildrith (an arranged marriage to a woman he didn’t love), every one of Uhtred’s women has died: Iseult, Gisela, Aethelflaed and Brida. Now, it seems as though Eadith is moving into position as Uhtred’s next bedfellow, perhaps the healer shouldn’t start any long books.

When Eadith returned from her travels in Francia, Uhtred greeted her warmly, and the pair exchanged a bit of flirtation when he mistakenly lay naked in her bed, thinking he was waiting for ‘the tall girl from Frisia’ (who’d swapped rooms with Eadith). At the end of the finale, Uhtred invites Eadith to remain in Bebbanburg, an offer she accepts. And she’s not the only one…

The longevity of Lady Aelswith has been one of The Last Kingdom’s biggest surprises in a show where characters drop like flies. (It’s also resulted in the strangeness of actor Eliza Butterworth playing the mother of Millie Brady, who’s the exact same age as her, and the grandmother of Phia Saban, who’s only five years her junior.) At the end of season five, Aelswith’s still standing, and planning to move into Bebbanburg along with Eadith, demanding a room with sea views.

Den of Geek spoke to Eliza Butterworth about Aelswith’s long life. “It actually was a bit of a surprise!” Everybody assumed that Aelswith had met her end after being poisoned by Lord Aethelhelm at the end of season four, but back she popped. “It was quite lovely that this woman keeps coming back again and again. She found her redemption finally in season four where she saw her wrongdoing and is trying to make amends. In a way, it’s nice to give that character another breath and try and help actually rather than be a pessimistic scowler.”

Eadith and Aelswith become “the dynamic duo that nobody knew that they needed!” laughs Butterworth, describing her character as having a comedy factor in her old age, “almost like the Maggie Smith of Downton Abbey character, this old lady that’s always making these ridiculous comments but you can’t help but giggle at them and sometimes see where she is right.”

It’s no spoiler to anyone familiar with English history that Aethelstan succeeds Edward as King, and season five saw the boy in training for leadership and a career on the battlefield, as trained by Uhtred. Aethelstan proved loyal, brave, wise and a true ‘son’ of Uhtred in season five. He’ll likely remain in Bebbanburg where his preparation for ruling will continue.

Edward’s third wife Eadgifu of Kent had four surviving children with Edward, two of whom went on to become King after the rule of Aethelstan, who died without his own heir.

Who died in season five?

Who survived for the film?

The main characters who remain intact for the next part of the story are: Uhtred (obviously), his children Young Uhtred, Stiorra and Osbert, his men Finan and Sihtric and their families, Father Pyrlig, Lady Eadith and Abbess Hild. In the Wessex royal family, there’s King Edward, his new wife Eadgifu, his sons Aethelstan and Aelfweard, mother Aelswith and niece Aelfwynn, and her mother’s advisor Lord Aldhelm. On the Danish side, there’s Rognvaldr. Father Benedict survived too, as did Aelfwynn’s betrothed Cynlaef. And finally, there’s King Constantin and his nephew. No doubt they’ll all be joined by some new threats and allies. We’ll bring you more on Seven Kings Must Die as it arrives.

The Last Kingdom season five is available to stream now on Netflix.

Quantum Leap Showrunner Has a Secret Plan for Original Star’s Return
Deadpool 3: The Problem with Bringing Back Hugh Jackman’s Wolverine
13 MCU Theories That Were Too Good to Be True
The Last of Us HBO Series Trailer Reveals Nightmarish Clicker Designs
Wrath of the Lich King Classic: Every WoW Class Ranked Best to Worst