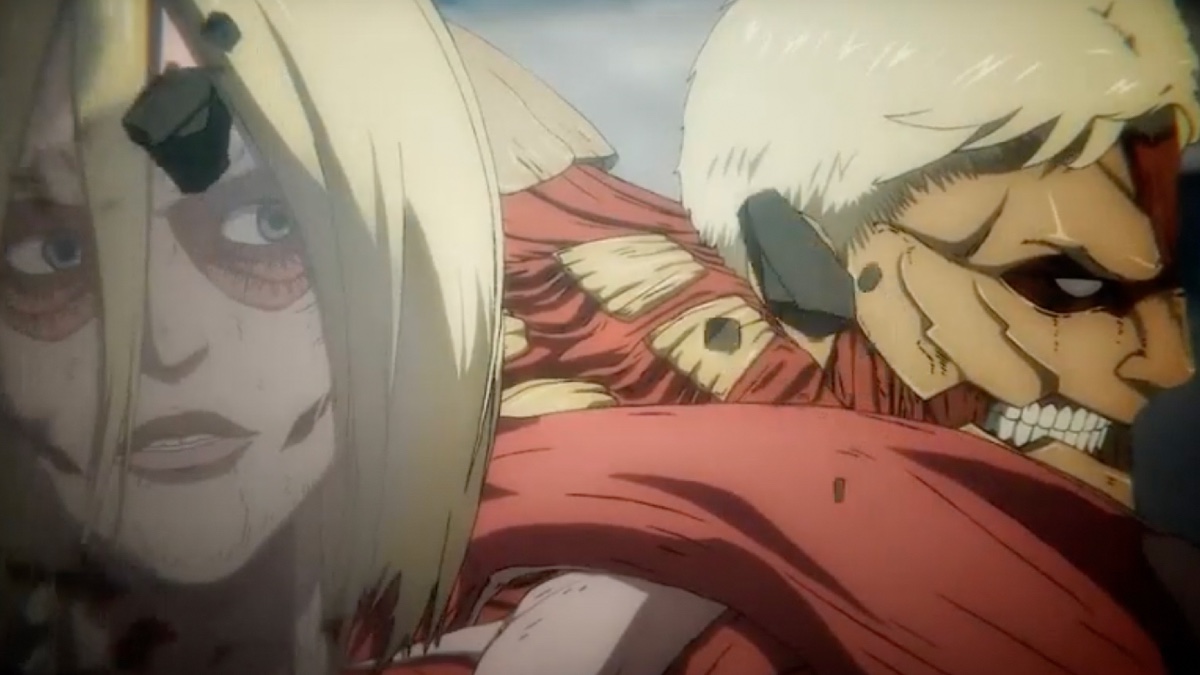 “You guys are our friends?!”

“Traitor” is a word that has a natural connotation behind it, but a traitor isn’t inherently a bad person, especially when the people that are being betrayed are those that are in the wrong. The latest episodes of Attack on Titan have forced unlikely characters together in an alliance that’s necessary for the greater good (ie. saving the world). This scrappy Resistance group has made great strides in a short amount of time, but there’s a natural amount of trepidation heading into an episode that’s named “Traitor.” Fortunately, Attack on Titan continues to defy expectations and the traitor in question is in reference to old relationships that the characters have moved past.

Samuel and Daz, brainwashed Jaegerists, brand Connie a traitor. This ironic label is practically a badge of honor coming from them, but it also brings to light how Connie viewed Bertholdt and Reiner as traitors all of those years ago when they kidnapped Eren. Connie and company have become the very traitors that they once fought to annihilate. They take solace in their ultimate goal to save the world, but this is exactly what Reiner wanted to achieve with his infiltration and kidnapping plan. In the world of Attack on Titan everyone is a traitor to someone else and this episode is a fantastic study in the difficult decisions that need to be made when “treachery” is the only course of action.

“Traitor” is ready to let loose after Attack on Titan’s more muted previous episodes. In theory this collective of exceptional warriors from across Marley and Eldia would dominate in most battle scenarios. These characters definitely feel the pressure of what’s ahead of them and a reasonably simple plan to infiltrate the Jaegerists and acquire the Azumabito’s flying ship turns into a bloodbath.

What works so well with this disaster is that no one ruins the mission and there’s not some crisis of faith betrayal from Yelena. It’s purely the history that all of these warriors have shared together and how toxic the Jaegerists’ venom has become that triggers characters like Mikasa and Connie. Even someone like Magath is able to become a better person when faced with adversity due to how others like Gabi have shown him the light. Characters preach others’ lessons and it’s genuinely uplifting to take note of how everyone has rubbed off on one another and that these alliances aren’t superficial or temporary.

The return of the Azumabitos (remember them!) and the advent of a giant flying ship that brings this battle to the skies makes a lot of sense. It’s one of the few strategies that can actually level the playing field against Eren’s impossibly-sized Founding Titan. The Resistance unit isn’t fully successful in their goal and their plan actually faces major setbacks, but I’d be very surprised if the next episode doesn’t have these freedom fighters up in the air. It’s such a grandiose place for the series’ final battle to occur and it also provides a chilling opportunity to look down on civilization and view the cumulative damage that they’ve all contributed to over the years.

Attack on Titan’s final season has been full of satisfying parallels (or PATHS, if you will) to the show’s first two seasons and “Traitor” is rich in this regard. The aforementioned flashbacks that Connie experiences in regard to Bertholdt and Reiner are powerful. However, this reckoning is even more narratively poignant since Bertholdt and Armin were both the Colossal Titan. Armin is literally forced into the same interrogation at gunpoint that Bertholdt was subjected to, but on a deeper, cosmic level these two are also one through the united memories and powers of the Colossal Titan. Connie never respected Bertholdt, but in the moments where he saves Armin and kills his former comrades it’s Bertholdt’s face that he sees. Bertholdt. Armin. Traitor. Hero. What’s the difference? If nothing else, these explosions of empathy make every episode of Attack on Titan’s final season such a delight.

A lot of these payoffs connect on a character development level, but Reiner and Annie’s Armored and Female Titans fighting in tandem together again just elicits such visceral joy as a Titan fan. They just obliterate the Jaegerists that take them on. It’s even crazier to consider that this iconic Titan duo is still doing what they’ve always done–fight in favor of Eren’s execution–but it’s now presented as an act of heroism.

All of the tension that “Traitor” builds through this horrific homecoming culminates with Connie getting pushed beyond his breaking point. Connie’s execution of Samuel and Daz is grim, but it’s even more heartbreaking that Connie is forced to cross this line and take out two of his old friends. It’s a scene that if viewed by a stranger from afar would look no different than Floch’s recent executions of resistant soldiers. Connie and the rest of these characters desperately move forward because they truly have no alternative. The dangerous confrontation with Eren’s Founding Titan continues to loom over everyone’s heads, but even if they are victorious they may be too haunted by all of the “traitorous” acts that they’ve done to win this war.

“Traitor” is a stark episode of Attack on Titan that ramps up the casualties of war now that a plan is finally in action. It’s an entry that’s as emotional as it is suspenseful and it’s chilling to see how characters like Connie and Mikasa have become so cold with only a few episodes left in the series. There’s no turning back at this point for these “traitors” to humanity, which is equally exciting and terrifying as Attack on Titan races to its finish.