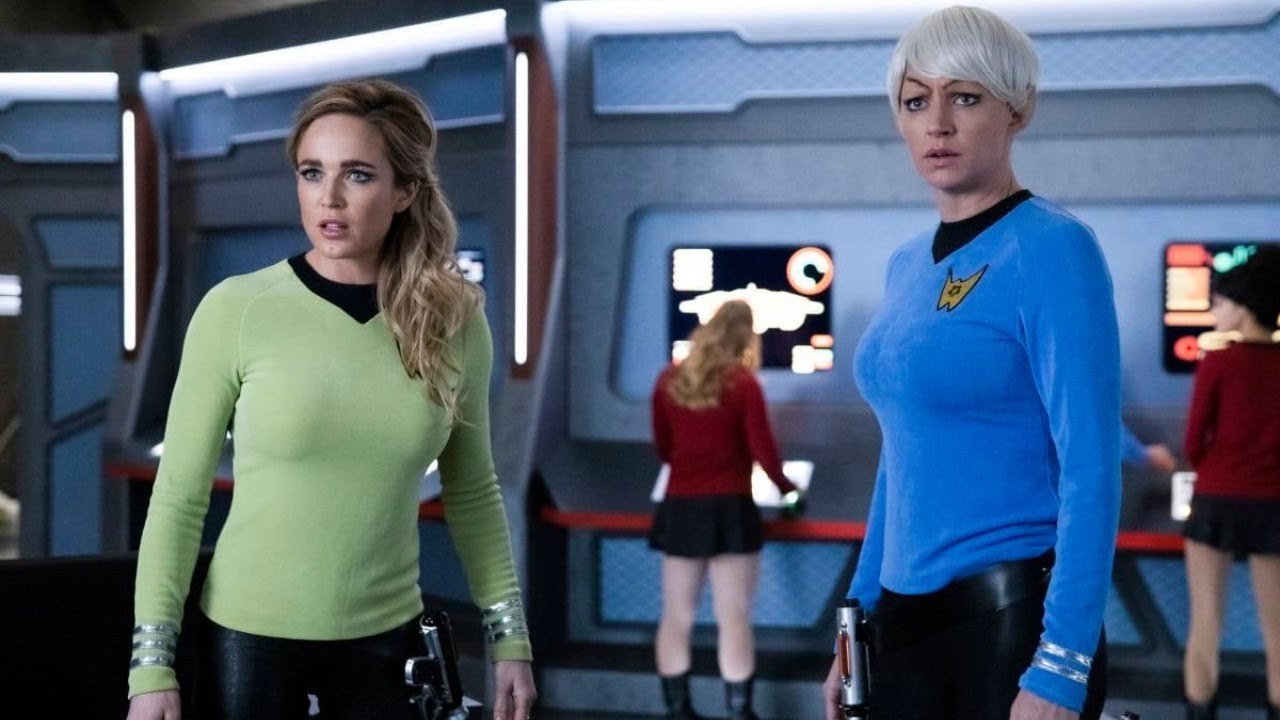 Mona and Gary are caught in this dystopian world. The only thing humanity can do is eat mush and watch TV. Mona comes how to watch TV and starts with “Ultimate Buds”, a Friends type sitcom, Behrad (back alive), Nate and Zari are in this show. When Behrad takes of the totem Zari 1.0 (from the old timeline) come out and takes over Zari 2.0’s body. This Zari remembers who she really is and tries to get Nate and Behrad to remember but they think they are actors.

Zari finds a door in the apartment that has never been opened. When she opens it she finds a portal to another show, “Hightown Abbey” where the three of them meet Constantine and Astra.
Neither remember who they are either but Constantine does remember some magic and creates a spell to send them to Sara and Ava.

Mona and Gary sneak into the television studio and find the huge automated script generator Charlie has built to write the Legends TV adventures.

The rest of the Legends find Sara and Ava on a show called Star Trip. The two of them also don’t remember who they are but have found a faint signal. Nate and Behrad push a button to contact the source and suddenly the who crew find themselves in Mr. Parker’s Culdesac.

Mona decides enough is enough and takes over writing the script and types in that Legends remember everything.

On the TV show, the Legends remember not only who they bare but also the previous timeline where Zari 1.0 is from.

Charlie arrives at the automated writing room and stops Mona and Gary from doing anything further.

It turns out that the deal Charlie made with her sisters is that she could bring the Legends back, including Behrad, to live on TV shows where they would help indoctrinate society to the Fates way of thinking.

Charlie can’t have them trying to break free and sends them all back to their respective TV shows. The Legends however don’t want to continue existing like this and push back. Sara and Ava find Rory and free themselves as does Astra and Constantine and Zari 1.0, Nate and Behrad.

They all end up together on a soundstage looking like themselves. Charlie tries one more time to plead with them even going as far as splitting Zari’s thread so that Zari 1.0 & 2.0 can both exist.

That doesn’t stop the Legends and they head off
to beat the Fates whole Charlie says she can’t
protect them.

#legendsoftomorrow #DC #review
Make sure to subscribe to AfterBuzz! – http://youtube.com/afterbuzztv