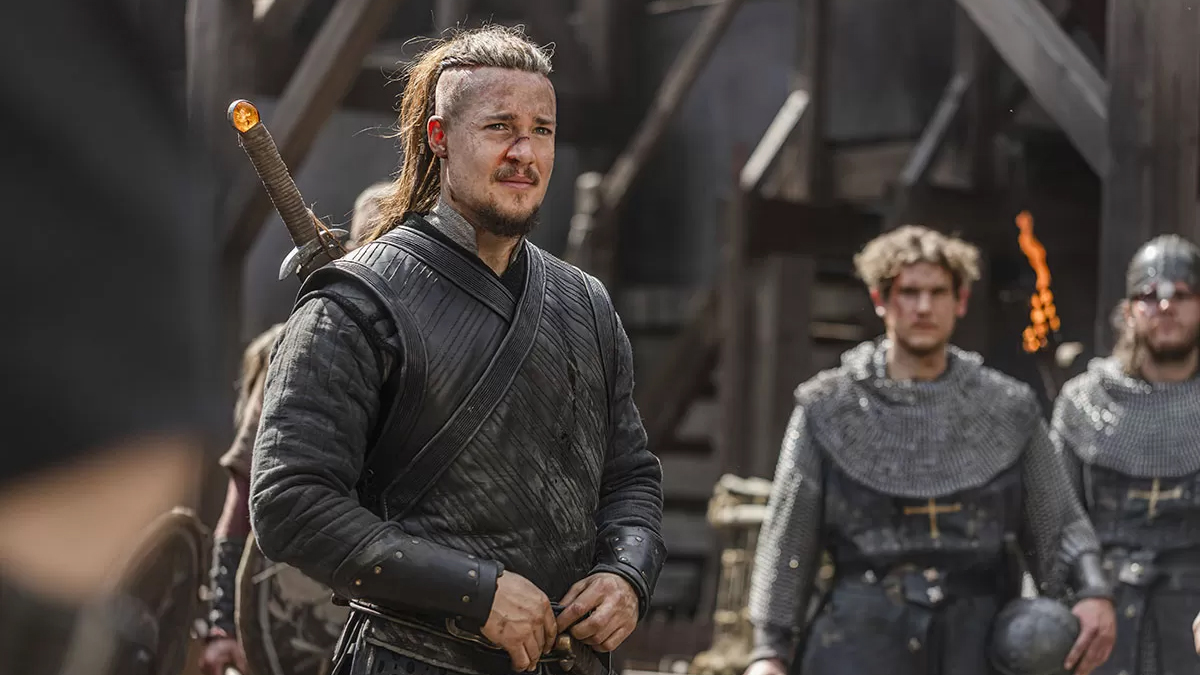 Warning: contains spoilers for The Last Kingdom season five finale and Bernard Cornwell’s War of the Wolf, Sword of Kings and War Lord.

Netflix’s The Last Kingdom approaches fidelity to Bernard Cornwell’s Saxon Stories in much the same way that Cornwell’s novels approach fidelity to historical fact – as inspiration, not obligation. Both prioritise their own storytelling over slavish adherence to source material, and so wind different paths towards the same destinations. Kings die and battles are fought, but exactly when, where, how, and who the casualties are, can vary.

Season five and Book 10 The Flame Bearer both end with Uhtred having regained his ancestral seat of Bebbanburg. In their final moments, he looks out over the water (with Finan in the book, alone on the show) and feels that he’s finally home. Uhtred’s route home, and who else is left standing by the time he gets there, differs from version to version. Lady Aelswith, for one, retired to a convent and died soon after the death of her husband King Alfred in the Saxon Stories, but is alive and well and planning a move to Bebbanburg by the season five finale. Sigtryggr survives in the books, but not in the show, while the reverse is true for Aldhelm. In the Saxon Stories, dastardly, scheming Aethelhelm doesn’t take his own life and after he dies, is replaced by his dastardly, scheming son Aethelhelm the Younger…

The TV adaptation diverges so regularly from Cornwell’s books in fact, that it’s probably folly to use them to try to predict the show’s next moves. But with season five finished, a feature-length film on the way, and three novels still unadapted, what can the books teach us about what destiny has in store for Uhtred next? Final warning – major book spoilers for instalments 11, 12 and 13 ahead.

In book eight The Empty Throne, Eadith and Uhtred become lovers the night before Aethelred’s funeral. Aethelflaed isn’t pleased and orders Uhtred to get rid of her former husband’s mistress, but he won’t. When Uhtred suffers from an infected wound he received in a bout with Cnut, it’s Eadith who mystically cures him using Cnut’s blade. Eventually, Eadith and Uhtred marry, and when he retakes his ancestral fortress, she becomes the Lady of Bebbanburg.

By the end of Book 12 Sword of Kings, however, Eadith goes the way of Uhtred’s other past loves Brida, Iseult, Gisela and Aethelflaed. She contracts the plague after leaving Bebbanburg to care for Uhtred’s son-in-law and grandchildren, who’d caught the disease. All of them die from the plague, leaving Uhtred to end up in Book 13 War Lord with Benedetta – an Italian woman who had been rescued after being captured and enslaved as a child.

Benedetta refuses to marry Uhtred and so becomes the unofficial Lady of Bebbanburg, while Uhtred is forced by the King to marry Eldrida, the young widow of a Cumbrian Ealdorman whose lands and men are ceded to Uhtred through the union. Uhtred describes Eldrida as young enough to be his granddaughter, “a small, plump girl with a face that reminded [him] of an indignant piglet”. Nonetheless, he follows orders and marries her to become Ealdorman of her lands, allowing her to live unmolested in a private chapel he has built for worship, while he lives out his days in Bebbanburg with Benedetta.

In season five of the TV show, Stiorra and Sigtryggr are living in peace as the Danish rulers of Eoforwic when Brida’s army attacks the city. Brida’s forces are eventually routed, but thanks to the dastardly Lord Aethelhelm, disunity is fostered between previous allies Sigtryggr and Edward. Sigtryggr attacks Aethelhelm’s camp, Edward retaliates and sentences Sigtryggr to death. Uhtred carries out the execution at Sigtryggr’s request, and eventually, Stiorra and her people come to live in Bebbanburg.

In the books, it’s Stiorra who dies first. After Uhtred’s army is led south in a ruse to ensure that he can’t come to his daughter and son-in-law’s rescue, Danish warlord Sköll Grimmarson attacks Eoforwic and kills Stiorra. That kick-starts War of the Wolf’s revenge narrative in which Sigtryggr and Uhtred successfully seek vengeance against her killer. (Sigtryggr is later forced to marry Aethelstan’s twin sister by the King, in order to put Saxon queen by his side at Eoforwic. The Dane eventually dies of the same plague that kills his children and Eadith by the end of Book 12.)

In Book 12, Sword of Kings, Edward dies and leaves a will that divides the kingdoms between his two sons, half-brothers Aelfweard and Aethelstan, leaving the lands on the brink of civil war. Bernard Cornwell writers in his historical accompaniment to Sword of Kings that there’s some suggestion that Aelfweard ruled Wessex for a month after Edward’s death, before he also died, and so Cornwell exploited that possibility to tell the story of the half-brothers fighting for the city of London, and Aethelstan killing Aelfweard to take control of the Wessex throne. Whatever the truth of the matter, it leaves King Aethelstan as the ruler of Edward’s kingdoms, but not yet England. Aethelstan eventually dies leaving no heirs, and is succeeded on the throne by his half-brothers Edmund and Eadred, the sons of Edward by his third wife Eadgifu.

In Book 12, Aethelstan’s right to succeed Edward was being questioned and sabotaged by Aethelhelm the younger, who wanted his nephew Aelfweard to take the Wessex throne. So Aethelstan made Uhtred a deal. When Edward died, Uhtred would agree to kill Aethelhelm and Aelfweard, and in exchange, Aethelstan would swear not to try to annexe Northumbria or take Bebbanburg during Uhtred’s lifetime.

In the final Saxon Stories book War Lord, Aethelstan breaks his vow to Uhtred and invades Northumbria. He wrongly suspects Uhtred of plotting with King Constantin of Scotland to take his lands, and unsuccessfully tries to invade what is now modern Scotland. King Constantin and Viking leader Anlaf ally against Aethelstan’s army and the two great forces meet in the decisive battle of Brunanburh, the final battle of Bernard Cornwell’s book series.

The Battle of Brunanburh

If The Last Kingdom Netflix film Seven Kings Must Die takes this story to its conclusion, it will end on the Battle of Brunanburh. That’s where Aethelstan’s armies fought an alliance of Scottish and Viking invaders in 937. In the epilogue of Book 1 War Lord, Uhtred lists some of the battle’s royal casualties: Domnall, Cellach, Anlaf, Owen, Gibhleachán…

“The poets say seven kings died, and perhaps they did, but some were mere chieftains who just called themselves kings. I rule more land than some kings, but call myself the Lord of Bebbanburg and that is the only title I have ever wanted, and it will belong to my son and to his son.”

Does Uhtred die in the books?

By the end of War Lord, Uhtred is well into his sixties, perhaps older, and thinking ahead to the end of his life. He and his brother-in-arms Finan will both die soon, he reflects. Finan has requested that his body be taken to Ireland “to sleep with his ancestors.” Uhtred’s only request, he says, is to die with a sword in his hand. He keeps his sword in his bed at night in preparation to travel to Valhalla. “Until the day when I shall go to the hall of the gods I shall stay in Bebbanburg. I fought for Bebbanburg. It was stolen from me, I recaptured it, and I have held it against all my enemies.”

The book series ends with Uhtred contemplating the fortress’ future and imagining that it will stand until Ragnarok, or the end of the world, comes, “… when the seas will boil, the land shatter and the skies turn to fire, and there the story will end.” Depending on Netflix’s budget, that would make some final scene for the film, no?

The Last Kingdom season five is available now to stream on Netflix. The Saxon Stories are published by Harper Collins.

Why the Multiverse Could Be the Key to Wanda’s MCU Return
Quantum Leap Showrunner Has a Secret Plan for Original Star’s Return
Wrath of the Lich King Classic: Every WoW Class Ranked Best to Worst
The Last of Us HBO Series: How Melanie Lynskey’s Character Expands the Game’s Universe
Doctor Who’s Best Stunts